What happened since the end. by Laura N. '09

Bringing you up to speed on life since I finished all my schoolwork. FOREVER. (You're so jealous.)

Scatterred throughout the years are probably dozens of blog entries which begin with my eternal apologies for their lateness, and the fact that I haven’t blogged in “forever.” (The earlier back you look, the closer together those entries were. I used to say that after 3 or 4 days without writing anything. Silly freshmen.) They nearly always start with, “So sorry guys, but I have been insanely busy these last dew days/weeks/months that I haven’t had time to write anything. Here, check out my full page to-do list.”

This time, I haven’t written for a week an a half, because I’ve been doing nothing at all and it’s been utterly fantastic.

But like any good MIT student, 10 days of that has driven me absolutely insane, so it’s back to productivitiy! Time to churn out the dozens of blog entries I planned but never wrote. Looking back in the archives, it seems that Mollie, the famously prolific, friendly, and helpful blogger, wrote entries right through the whole summer after her graduation, so according to her precedent I have some time yet.

Let’s see if I can get you up to speed on what’s been going on in my life lately.

The last you really heard from me, I had just turned in my thesis and was going to a meeting for a group project. I was none too happy about it, I might add.

I have barely slept, my brain is completely liquid, I haven’t had a real meal in days (I pretty much made a dinner out of Sun Chips and pineapple soda the other night…), I feel like absolute crap, and this is absolutely the last thing I’d like to be doing right now. I’m actually pretty miserable at the moment.

Even down to the bitter end, MIT enjoys beating you down and destroying your soul. Right now, IHTFP is feeling pretty one-sided…

Well, the meeting was relatively painless- we finished most of the work, and all that was left to me was to rewrite the introductory paragraph to our paper to reflect our professors comments on our first draft, but even that was beyond my abilities at that point.

When I got up, I rewrote the paragraph I needed, and proceeded to have the most miserable two and a half days of my life.

IHTFP is a timeless motto of the Institute. People who don’t understand the concept claim that it means different things to different people. This is false. The true nature of IHTFP is that it holds a dual meaning for all of us. Sometimes it means “I have truly found paradise. Other times it means I hate this f?$%[email protected]# place.” Sometimes it means both of these things at the same exact time.

Well, last week it meant the second one, and the second one only, and quite vehemently. I honestly don’t think I’ve ever hating this effing place quite so much before in 4 full years. Tuesday morning and early afternoon I finished all of my work for 1.851 (Water and Sanitation in Developing Countries), which was pretty painless- just a few paragraphs on the readings, and a reflection on the semester. Two classes down, two to go.

Now, keep in mind that I was pretty worn out at this point. 12 hours of sleep was not enough to make up for the previous….well, 4 years in general, but more specifically the few weeks of frantic thesis-writing stress. I had barely slept in the previous week, hadn’t eaten a real full meal in far longer than that, and was just absolutely miserable in general. So when my D-Lab team decided that our prototype needed a major overhaul on Tuesday night, I almost lost it. At about 6 in the morning, after staying up with one other group member putting together the final paper and finally deciding to go to sleep so we could be in lab within 3 hours to finish the prototype our teammates had left behind for us to complete, I did lose it. We won’t go into details, but I basically screamed obscenities into my pillow for a few minutes before collapsing for a few short, miserable hours of sleep.

You see, after Sunday night’s lack of sleep, the prospect of another all-nighter was absolutely sickening to me. So when I saw one looming on Tuesday night, it put me in a pretty foul mood. I honestly just thought I couldn’t handle any more of it. You know that feeling, when you’re like, “no really, I actually can’t take anymore of this?” It was sort of like that. I lived through Tuesday night, spiraling into further misery knowing that despite how little tolerance I had left, I’d be doing it again on Wednesday night. And it’s not like any of those miserable all-nighters actually taught me anything, or were at all instrumental in my education. I suppose they were made extra miserable because somewhere deep down I knew that I could just blow off the rest of my work and still at the very least pass everything, and as we learned a few weeks ago, D is for Diploma.

Wednesday morning was spent working on the D-Lab prototype, and then the rest of the day and long into the night was spent on my set design project. The good news was that I was actually really excited about my set design project, and even looking forward to finishing it. (I was eventually really proud of my final product.) I honestly don’t even remember how little I slept that night- it’s all just one sleepless blur. I got up early to make some print-outs and got to class with just enough time to pin up my images for our presentation. Our instructor had invited artists and designers and theater people from around the area to look at and comment on our designs, which was actually pretty cool. I’d shown off my work in engineering classes like that several times (most notably in 2.009), but this was different, and a little scary at the same time. Because I mean really, I’m not artistic.

I showed my Photoshop model (which will be discussed in a later post), and got some good feedback. From there I went off to my last shift at work, then to my tutoring job, then back home. The end was truly in sight- classes were over but I still owed my set design instructor all of my “supporting materials-” inspirational images, preliminary sketches, a discussion of my thought process, etc. This was a somewhat tedious but easy task- it took me several hours to finish all of the updates to my set design blog (don’t read it too closely- the last half of the entries were never proofread at all!). That night a bunch of friends were going out to celebrate the 21st birthdays of Andrew ’10 and Justine ’10. Sarah ’09 came by my room at 11, but I was still frantically writing. I really, really just wanted to finish. I told her I’d only be another half hour at the most, and that they should go ahead without me. I finally finished all my updates (at 11:13 PM, according to the timestamp- I can never figure out how to make those things be in the eastern time zone) and emailed my instructor to let her know I was done. 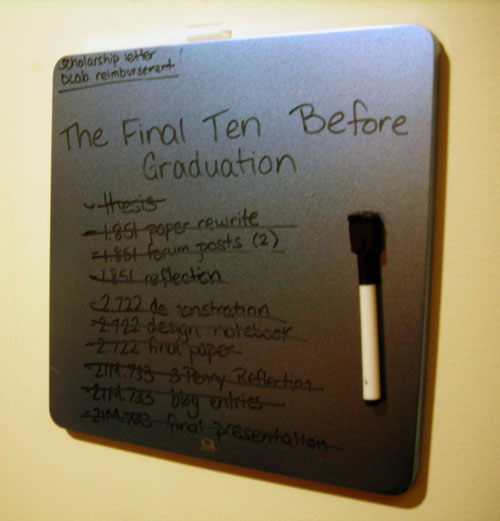 Then, I went out drinking. But responsibly! I mean, we were celebrating a couple of 21st birthdays, after all. We only stayed out for an hour or two, came back to the dorm, ate some nachos, and played some Halo.

Then, I got to do something that I honestly don’t think I’ve really, truly done in 4 years: I went to sleep, and didn’t get up until I felt like it.

It was absolute bliss.

Since then, I’ve spent the past week and a half doing pretty much nothing at all. On Friday and Saturday Sarah ’09 and I played a lot of Zelda. 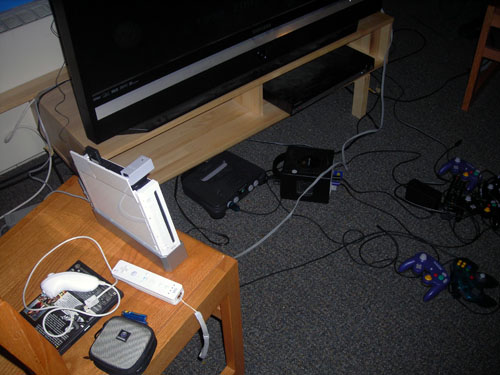 There are a lot of consoles in the Conner 4 floor lounge. 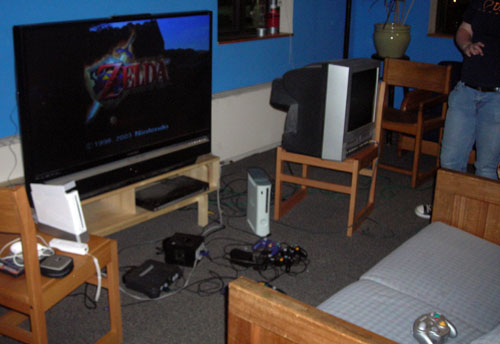 Zelda! Sarah ’09 has like, every version of Zelda ever released. And then some. 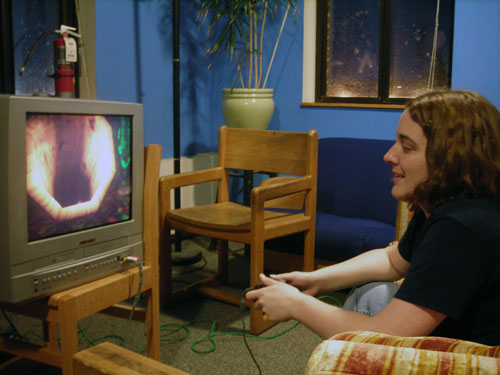 Sarah played some Banjo-Kazooie while I played Zelda. We basically decided to take a break from Halo to play some old school games. Take us back to our childhoods, you know.

On Sunday I trekked over to the student center and bought a membership to the MIT Science Fiction Society, home of “the world’s largest open-shelf collection of science fiction.” I’ve know it was there for years, but knew that I’d never have time to read any of the books- until now, of course. I’m a little rusty, actually- I used to be able to plow through novels much faster than this, but I guess that’s to be expected, considering how little leisure reading I’ve done lately. But I’ve made my way through a fair few books over the past week, and am looking forward to continuing that trend over the summer. 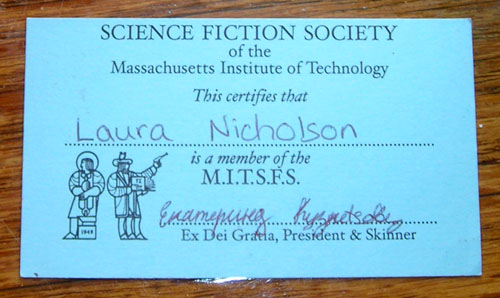 On last Tuesday night I went out to dinner with some friends who were visting Boston. Wednesday morning I made breakfast for all of Conner 2 (even though I don’t even live there anymore), and then hopped right on a bus for NJ. I spent a couple of days visiting my grandparents and volunteering at my church’s annual carnival. I came back here on Saturday afternoon, went to a party on Conner 3, did nothing but read on Sunday, and convinced Sarah and Adelaide to watch Dogma with me on Monday night. This inspired Sarah and I to watch more Matt Damon, because, seriously, who wouldn’t want that? So yesterday I did pretty much nothing at all except watch the Bourne Identity and the Bourne Supremacy. (We finally got tired of sitting around watching movies after that, and decided to save the Bourne Ultimatum for today.)

By the way, somewhere in there MIT finally caught up with what I already knew, and figured out that I finished everything. It’s pretty exciting to log into my student account and see this:

So, it’s been fun, this week of doing mostly nothing. But it is getting a little boring. So, today I decided to get back to this blogging thing. In a few minutes I’ll be heading to a meeting with the director of MISTI-Spain to see if I can figure out what to do with myself next year. (Yeah, while there is still no actual plan, the plan for finding a plan has changed a bit, mostly because I’m really indecisive.)

Then it’s going to be a lot of blogging, packing, job searching, reading, and exercising (hopefully, I’m seriously out of shape). Friday kicks off Senior Week. My parents, sister, and grandma get here on Thursday, just in time for the Pops concert. And then I graduate!

Speaking of which, this is really exciting: 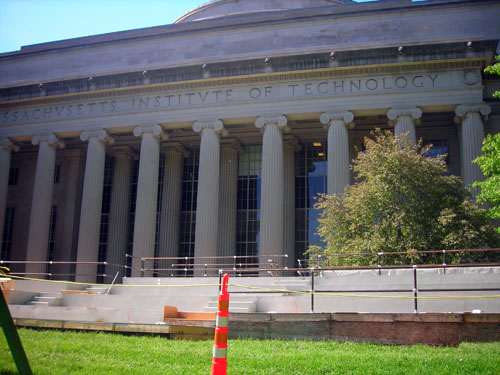 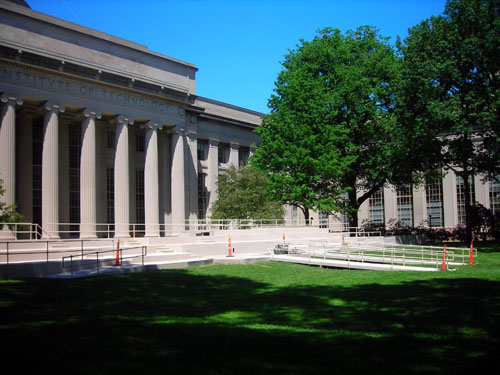 The graduation stage has been under construction in Killian Court for awhile now, and everytime I pass it I get more excited. It looks pretty complete by now.

And then, well, who the hell knows. Not me.

15 responses to “What happened since the end.”