An Asymmetric Discussion of Shoes, the Process of Moving, and 3D Glasses by Yan Z. '12

Today I will tell you how to get into MIT. You get into MIT by wearing thick, waterproof shoes, because the road to MIT is paved with slush. (Yes, all of them. I tried.)

Slush blooms like grey wildflowers on concrete during murkily warm, precipitation-infatuated Januaries. This I gleaned from a morning of traipsing from car-to-door with luggage stuffed like roasted peppers (the stuffed kind, you know), ferrying the bare-stripped evidence of my baryonic selfhood in three suitcases, two boxes, and a broken laundry hamper mashed onto the cushions of a green car. (Is “green” somewhat of a creative-imagery let-down? To be specific, the car was nearly the exact color of the Green Party logo, but I thought that “Green-Party-green car” would be too much of a modifier sandwich.) Slush, puddled with motor juice under thin skins of ice, is the terror of unscotchgarded ankles in urban New England. Slush is a test of courage and moral fiber.

MIT is not a school for the daintily-shod. For that, I direct you to the sun-drenched, flip-flop-friendly sidewalks of that other school in Southern California, where the socially-repulsive pairing of socks with sandals is an acceptable solution to hard weather. (By “hard,” I mean “comparatively pleasant.”)

By the way, I’m sure some of you think that “shoes” is a metaphor for perseverance, academic ambition, or high SAT scores, but I urge you to read this literally. Forget having brilliant ideas or scientific ingenuity or whatever; you can’t pulverize a chunk of snow in your path by factoring large integers on a quantum computer in polynomial time, unless your shoe also runs Shor’s algorithm.*

*Inexplicably, as I was writing this, I mentally permuted a well-known tongue-twister into “Shoes solve Shor cells in the C shell.”

Long story shor(t), I moved out of Random Hall and into pika on Monday.

The purest of all unimportant joys may well be the clarity of knowing exactly what you own. To be precise, I have no clue whether I own any free will* or whether I still own my Intro to Solid State Chem. textbook after lending it out to some guy named Cappie, but there’s little point in chasing after the unanswerable. After the sad, sweet, soul-searching-and-room-searching process of moving out of Random Hall, I can list everything I own that interacts with photons and has never interacted with Cappie.

*Evidence against the existence of free will: I lost the game while writing this.

Unmachinewashable sweaters,
Unmachinewashable electronics (laptop, etc.),
A problem set for
8.07 sublimated by Maxwell Stress Tensor puns (I was tired that week, alright?
I just couldn’t feel any sympathy for
how stressed and tense the electromagnetic field was.),
A mechanical caterpillar,
Name-brand ketchup (Heinz) as well as a phonetic ripoff of name-brand ketchup (Hunt’s),
Van Gogh flipbook in which the artist cyclically loses and regains his ear if
you flip it forwards and backwards in sequence,
Stephen Hawking’s Universe (although he’s been asking for
it back. Not that I wanted it in the first place, considering how much entropy he put in it.),
Stamps, the kind that last for-
ever supposedly. (Stephen Hawking hates these stamps because they violate all sorts of
physical laws when they fall into black holes.),
Five bottles of free hand sanitizer, courtesy of H1N1.

(In a moment of face-slapping irony, I realized soonafter that my list of possessions does not in fact include a room at pika, thanks to technical details of the housing system. For the past week, I’ve been sleeping in the back of Ruth’s room, storing my unmachinewashable luggage in Dave GradStudent’s room without his knowledge/consent, and waking up every morning in gorgeous pools of sunlight that softy obliterate my aversion to homelessness.) 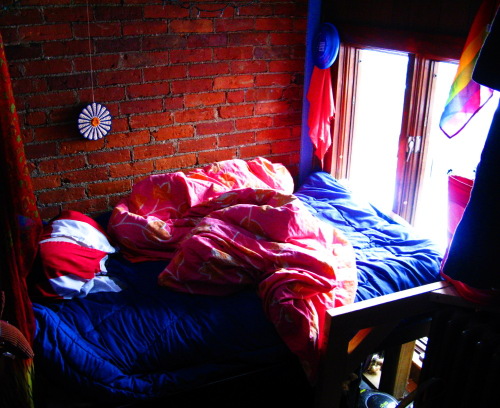 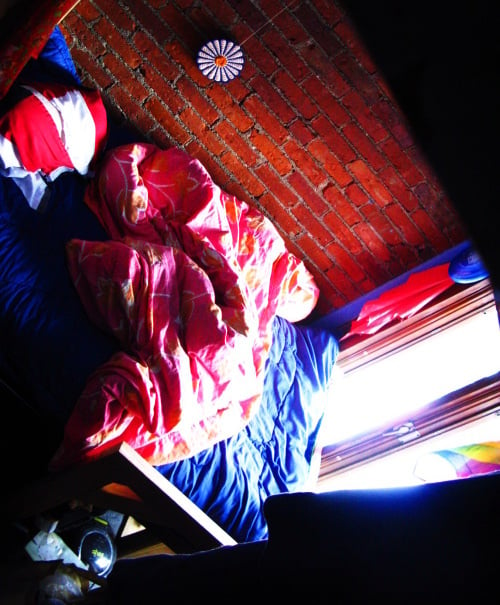 Between transferring addresses, splurging a weekend on Mystery Hunt, helping build a sounding rocket with an X-ray telescope (it’s going into outer space in 2011! As opposed to inner space, which is where mathematicians like to take dot products), cramming a 16-week class into 4 weeks, grading for the class that convinced me to major in Physics a year ago, not blogging, and sleeping five hours per night, I’ve been tossing a problem around in the liminal spaces between rational thought and crazy conjecture. I’m going to share it here, with the warning that it lurks around in a playground of optical physics and offers to give you plenty of brain candy if you follow it a bit further. (Don’t take candy from strange physics questions.)

A few weeks ago, my friend Aviv* went to see a certain movie and returned home with a pair of magical 3D glasses. They were magical not only because they’ll probably win an Academy Award for Best Inanimate Object in Cinema but also because of the strange way in which they filtered light. When Aviv looked in the mirror through his new glasses and closed his left** eye, he saw one lens of the glasses go dark while the other one remained transparent. Take a guess. Which lens was which?

*Aviv’s defining characteristics are (1) competence at both computer programming and roller-skating (he worked for Google and roller skates in Boston regularly without getting concussions) and (2) surviving on a diet consisting of only broccoli, strawberry yogurt, and chewy bars. Unrelatedly, the most bizarre thing that I’ve said to a mathematician recently was, “Did you know that if you cut up broccoli, you just end up with exponentially more broccoli than you had originally? That’s because broccoli is a fractal.”

**Left and right here will always be in reference to Aviv, not the mirror image of Aviv.

Except that exactly the opposite phenomenon happened. When Aviv closed his left eye, he saw the right lens go dark. That is, he could see his closed eye but couldn’t see his open eye in the mirror.

[EDIT: Just to be clear, I ruled out the possibility of the linear polarizing system described above as soon as he mentioned this. Avatar was released in three different 3D formats, according to Wikipedia, and two of them offer interesting solutions to Aviv’s question.]

After 15 minutes of Googling all possible combinations of “Avatar,” “3D glasses,” “what the heck, I thought I knew how light worked,” I stumbled upon a paper summarizing the technical specs of the Avatar glasses. (The discovery of this document is left as an exercise to the reader.) Quickly cobbling together a few scraps of peripheral 8.03 knowledge, I scribbled down a halfway decent explanation and went to bed. The next morning, I decided it was basically all wrong. Two hours later, I decided it could be workable with a few changes.

And then I decided that I simply needed more data.

Thus, gentle reader, I implore you to try the following tests and post your observations if you happen to have a pair of Avatar 3D glasses and a mirror within close reach:

1.Put on the glasses, look in the mirror, close one eye. Do you confirm Aviv’s observation?

2.Look at light reflecting off a surface at an angle of around 50-60 degrees from the normal. Close one eye. Close the other eye. Does the light disappear either way? If so, open the eye that doesn’t block the light, close the other eye, and tilt your head 90 degrees or until sufficiently uncomfortable. See if the intensity of light changes.

3.Repeat both of the above tests wearing the glasses backwards. (That is, face the outside of the glasses toward your eye.)

4.Repeat Test 1 with a reflective metal surface instead of a mirror.

In the meantime, I encourage you to comment here if you have an explanation. Scientific backing is appreciated but not necessary.

45 responses to “An Asymmetric Discussion of Shoes, the Process of Moving, and 3D Glasses”