And now for the feature presentation… by Laura N. '09

I have been so busy lately, and I’ve definitely been neglecting you guys and only writing short updates. This makes me sad. So today I have a feature length entry for your enjoyment. I (finally) got around to editing my month old photos, so I can share them with you before they become completely irrelevant. (Please pretend that they haven’t already.)

First off, stealing from Sam:
DID YOU KNOW? You can remove duct tape with scotch tape? Uh…so this isn’t really so much a fact as something I was delighted to discover yesterday afternoon. You see, my laptop has a removable disk drive, and the little safety lock clip thing has somehow been broken off. The drive fits, but it doesn’t take much for it to slide around just enough for my computer to get angry with me for removing hardware without telling it first. I try to keep my computer happy, so I attempted to duct tape the drive in place. I figured this would be no problem since duct tape solves everything! Well…not so much. Duct tape doesn’t do so well around corners, and it had too much “give” to it, making it effectively useless. So today I decided to remove the duct tape for awhile, since it wasn’t really staying in one place and was making everything sticky. Of course, this left behind all of that gross duct tape residue (you know exactly what I’m talking about), which was a) messy and b) looked uncool. Bleh. I tried to clean it off to absolutely no avail. I thought that maybe scotch tape would be a better adhesive in this situation, so I put some on. The first piece went on kind of lopsided, so I pulled it off…and off came all of the sticky duct tape residue with it! Eureka! I of course proceeded to clean up the laptop surface with the scotch tape and then used it to secure the drive in place. So far it’s been working pretty well, and my laptop is clean again. Yay for serendipity!

Now, on to very old pictures: The last lecture of 3.091 is pretty famous around here, because lecturer Professor Sadoway gets…rather formally dressed and drinks (yes alcohol). Here’s the setup: 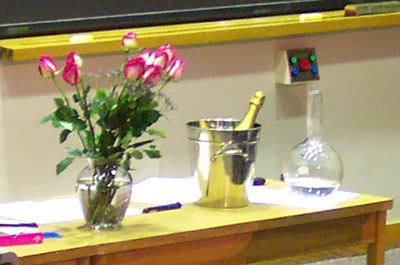 The flowers serve another purpose aside from just looking nice: Professor Sadoway freezes them with liqud nitrogen. I’m sure you’ve seen this kind of experiment before. Then, he proceeds to pop the cork of the wine bottle, pour himself a glass, and contemplate. 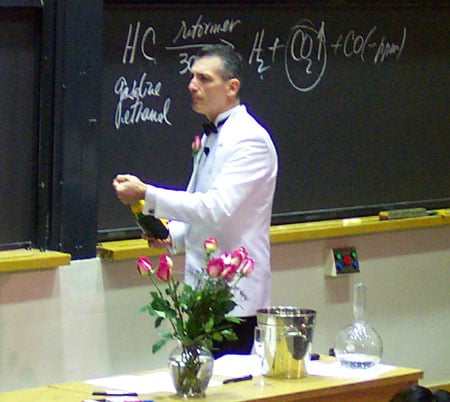 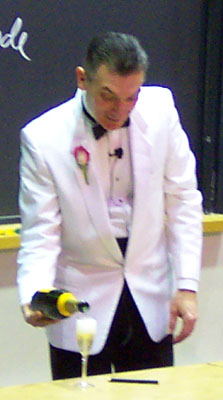 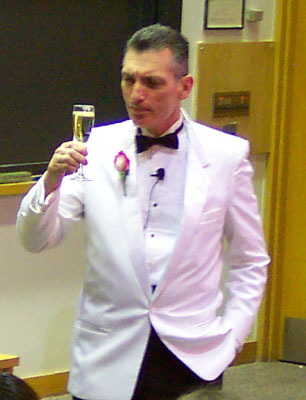 Now, as always in 3.091, everything always relates back to chemistry. I promise you that I understood all of this at the time and don’t really remember so well now. I know it had something to do with phase diagrams. There was actually a pretty cool experiment where he slowly added one type of drink to another (sorry, memory is fuzzy). The mixture went from cloudy to clear and back to cloudy again. It was a pretty neat demonstration of the phase diagram of a mixture, but to be perfectly honest, there’s no way I could explain it to you. Sorry. =)

There. I’ve now finally posted all of my pictures from LAST SEMESTER. Geez. Moving on…for my birthday, my mom sent me this sugar filled care package, which came all wrapped up in a bow. 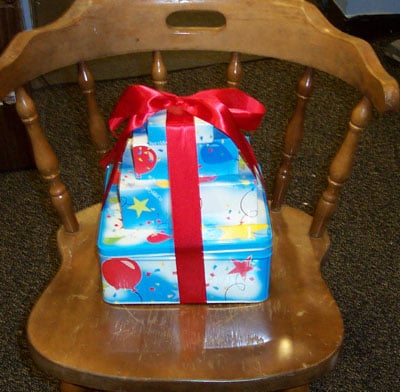 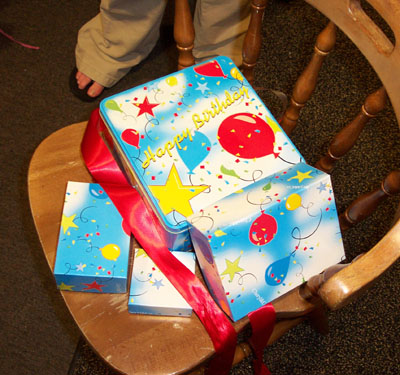 I took it apart and found each box to be filled with chocolates, brownies, and cookies. Yum. The moment I opened up the last box, April’s cell phone began to ring. It took me about 10 seconds to realize that it wasn’t a cell phone at all- the last box has a little chip on the inside with a light sensor. It plays “Happy Birthday” once you open the package. How cute is that?

And finally, we arrive at Mystery Hunt. I grabbed my camera and headed for Lobby 7, where the kickoff was about to take place. I walked in the door, and the very first thing I saw was…Venk!

Now this is remarkable because Venk isn’t actually an MIT student…he’s a friend of mine from high school who goes to Johns Hopkins. I pretty much haven’t seen him since graduation, yet there he was, hanging out in Lobby 7, waiting for the hunt to begin! He said hello quite calmly, and I just stood there and stared at him in shock. Of course, knowing Venk, it’s not remotely surprising that he traveled up to Boston for this but…well I just wasn’t expecting him. He played for the Manic Sages, who actually ended up coming in second, I believe- so congrats to them!

I chatted with Venk for awhile, then made my way upstairs so I could take some good overehead photos. Um…some of mine really suck, so I suggest you check out the photos on page 11 of this issue of The Tech. That issue also has an article on Beauty and the Geek 2, which features an MIT alum, on pages 1 and 17, and a really cool campus life article called “Ten Tech Traditions” on page 5. Bill Andrews is really cool and Campus Life is probably my favorite department of the Tech (even though I write for news…hmmm), so you should read it. Anyway, back to my crappy Mystery Hunt photos! 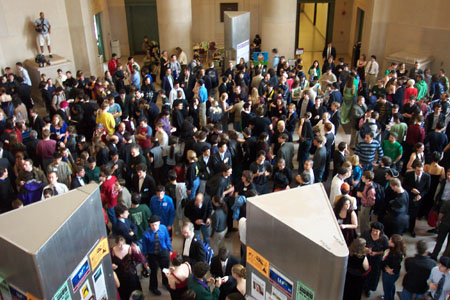 (That’s a lot of people waiting around to solve puzzles.) And the introduction begins…the hunters are being welcomed as the newest agents for S.P.I.E.S. (an acronym which stands for something either unimportant or “variable,” according to Hunt organizers). 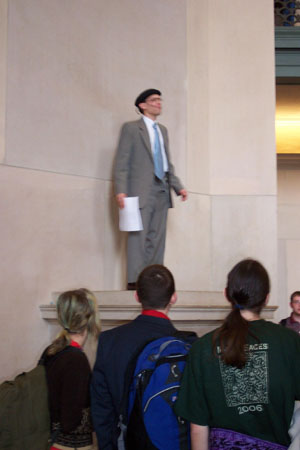 The ceremony is interrupted by the evil Professor Moriarty… 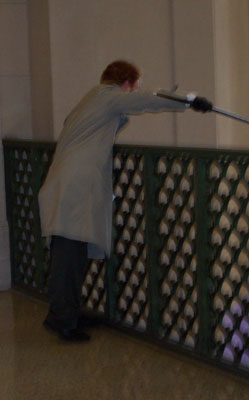 who outlines his evil plan in powerpoint format: 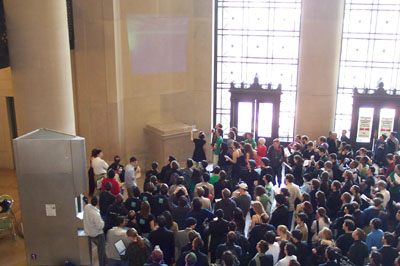 And the gathered S.P.I.E.S. agents are charged with foiling Moriarty’s plan. Check out the introduction for the whole story. I reccomend opening the powerpoint. It’s amusing. 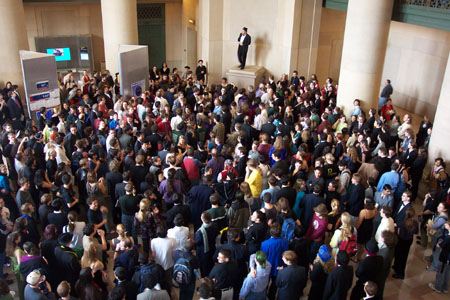 And the solving begins: (pretend this picture wasn’t obviously very poorly photosopped together from 4 different shots. Thanks.) 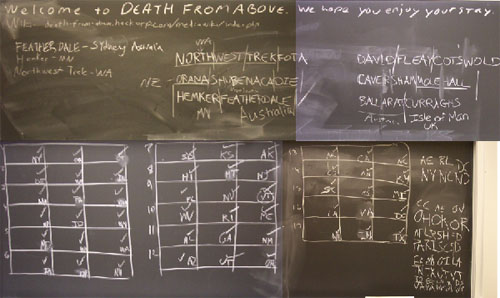 Just a very, very small fraction of the Mountain Dew consumed by the team Death from Above: 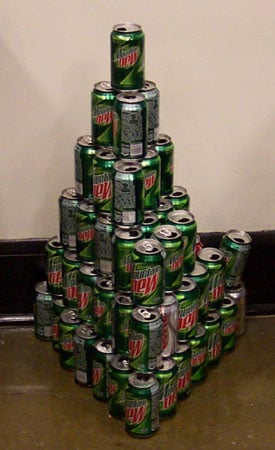 Coming soon: solutions to the puzzles I mentioned in my recent entry. Oh yeah, one last thing, I finally met Mike Borohovski “IRL,” as they say. He was much cooler about it than most people, who see you and yell “OMG YOU’RE A BLOGGER” and then the whole room goes silent and there’s this awkward pause where people judge you and it’s just bad. So props to him for that, plus he’s a cool kid.

Responses to comments:
edmund davis-quinn (about the hack entry): That is a great prank .. BRAVO!!! … Is Cal Tech going to do the same for Legends of Zelda??
Umm… I have no idea. Have you heard any rumors about this?

Shannon: Sorry for being slightly off-topic:

I know you took Spanish in high school- did you read any literature? In short, my school isn’t exactly the ideal place to study Spanish, so I was wondering if you knew of any good titles I could read. I just feel like I need some good immersion. Muchas gracias!
I actually took a whole class in literature in high school, and another one here at MIT. The class I took in high school read mostly short stories, although I did read Cien Años de Soledad (by Gabriel García Márquez) at the end of the year. I really enjoyed it but I must warm you that it is LONG and DETAILED. It can also be super hard to follow, because it follows this one family through several generations so there are like 20 characters who are all named after each other. Yikes. Of the books I read in the class here at MIT, I really enjoyed La Plaza del Diamante (which is actually translated to Spanish from Catalán). Como Agua Para Chocolate (by Laura Esquivel, I believe) is also really interesting, but I haven’t actually read it yet (I saw the movie..haha). I’ve been trying to read Retrato en Sepia (by Isabel Allende) since FOREVER but to be perfectly honest…it takes serious dedication to read whole novels in Spanish and I’m not so great about it. As for short stories, Ana María Matute writes pretty good, normal, real life type short stories. Gabriel García Márquez writes some good stuff with “el realismo mágico” (a mix of fantasy and reality) and Julio Cortázar writes some crazy sci-fi nonsense. The stories are good and really interesting, but they are out there. (No matter what you like, I totally reccomend “La Noche Boca Arriba.” It’s crazy.) If you’ve never really read Spanish literature before, you should probably start with some short stories and go from there. I guess that’s a lot of reccomendations, but those are the stories and authors I found interesting. I think if you read any of that you’ll find something you enjoy. Let me know if you like what you find. =)

9 responses to “And now for the feature presentation…”