The title is pretty self-explanatory, isn't it?

Since I haven’t updated all week, this entry will be super jam-packed to make up for it! This will be easy to do, since I had a pretty jam-packed week.

The beginning of the week was either pretty lame or well…it could be that I just don’t remember it. But Wednesday night I was working on a 7.012 pset. Alex ’08 (recently elected Burton Conner treasurer!) and I were hard at work in his suite lounge on Conner 4: 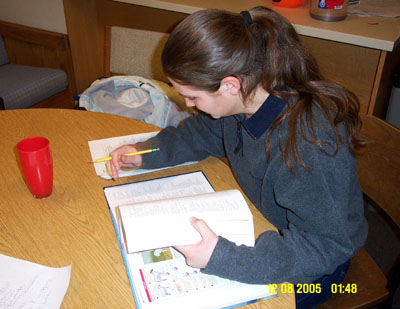 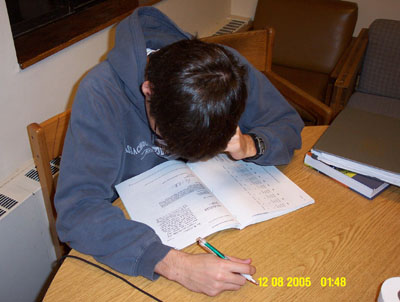 Then Aaron decided to go skiing. It had snowed earlier in the week, but most of the snow had melted. That didn’t stop us. Aaron strapped on the skis and made his way over to Brigg’s field, the athletics field right across from BC. 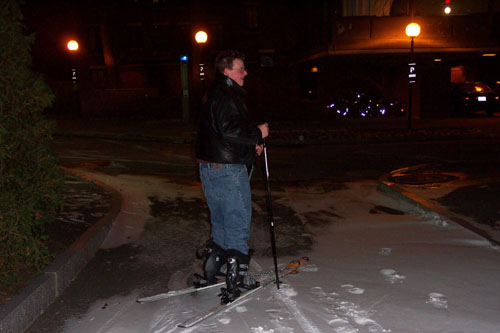 Alex got out his bike. You see where this is going, right? 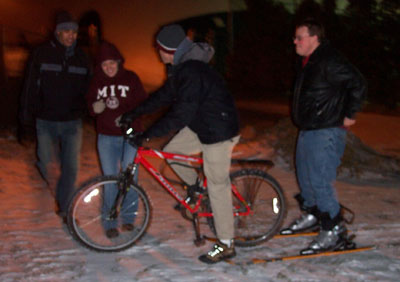 While they were all working out the details of this particular arrangement, Sam ’09 and I passed the time by having a swordfight with Aaron’s ski poles: 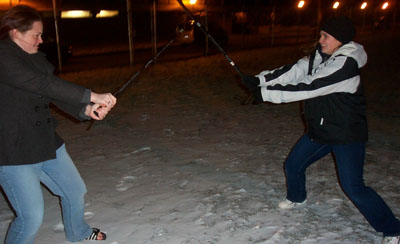 We stopped to watch (and take pictures) of the fun: 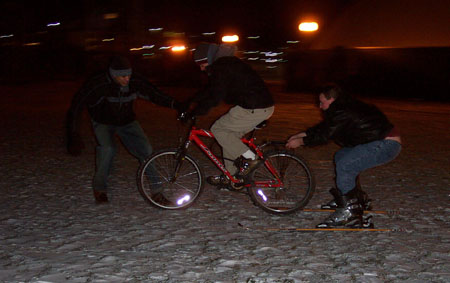 Not sure how much fun this was for those involved, but it definitely worked…to an extent. And watching it was an awesome way to procrastinate from bio. 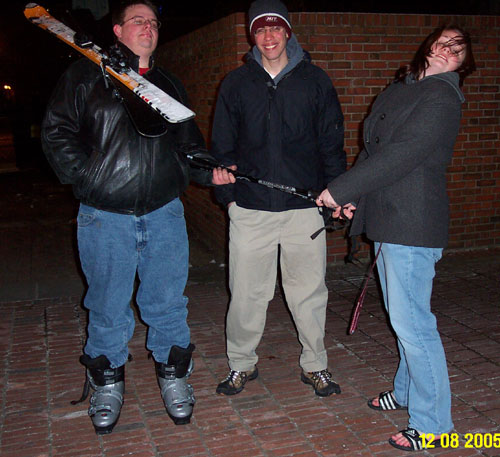 Aaron, Alex, and Sam pose for a picture in front of Burton-Conner. Notice that Sam is wearing open-toed flip flops. *shakes head*

Then, on Thursday night, I had an 18.01 pset to do. Since Becky and Sam are both not only in 18.01, but also better at it than I am, I made my way up to Conner 4 again to do some work. When I got there, they were all hanging out in the floor lounge because Conner 4 was having its Secret Santa gift exchange. Someone gave Aaron and cops and robbers set, so you can imagine that this opened up a whole lot of fun involving toy guns…

Somehow, however, it developed into John, Alex, Sam, Sarah, and I running around all of Conner-side in various states of “costume” (Sarah apparently routinely dresses up as “Captain Texas” by draping Alex’s Texas flag around her shoulders like a cape. I wore a face mask type thing. Kind of like Zorro, only not.) and “attacking” people. After running around Conner 4, we made our way down to ambush Conner 2. We attacked April, then Meara (her roommate, Adelaide, wasn’t around), and then the 223 suite. You may already be acquainted with some of the residents of the 23 suite through Sam’s blog: Ruth ’07 (frequent commenter) and Rick ’09. Dave ’09 and Zach ’08 also live there, and I’m sure they’ve been mentioned on the blogs at some point simply because there are 3 bloggers on their floor.

Anyway, we ran in with our toy guns and were delighted to find out that they were willing to fight back! Some wrestling went on, but when Rick came out with a PVC pipe, we decided to get the hell out of there. Soon after this, we were told to quiet down by the night security guard, only the night security guard is super cool so he was really nice about it. When we got back to the 413 suite, someone made the decision to go to IHOP. Then, when we got back, my pset got into a horrible accident with a water balloon. (Yes, this was all in one day. Except for the skiing part, which happened the day before.) Then everyone else finally went to sleep and I was finally able to copy over the work I had already done and actually finish the pset. I won’t even tell you what time this was, or what time I went to sleep.

I will tell you that it was snowing when I went to sleep early Friday morning. Earlier in the morning, the snow was on that unfortunate border between snow and rain- it wasn’t quite cold enough for real snow. Sarah and I stopped to check out a snowman that April told us that she, Becky, Sam, Darthur ’08, and a bunch of other random people built in Killian Court. Unfortunately, Frosty had passed on before we got there, thanks to the lousy wet/rainy/not really snowy condtions: 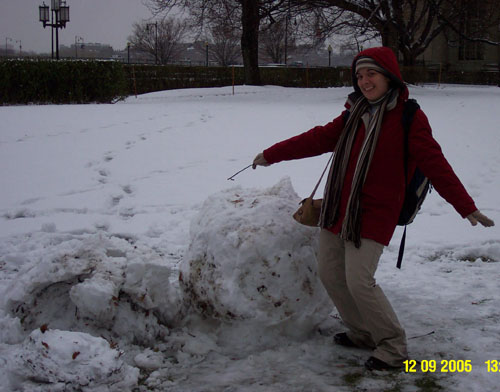 (Sarah seems a little too happy about the demise of Frosty, but I just take the pictures…)

I did manage to take some pretty pictures on the walk back to BC though. The first is Sarah in front of McCormick and the next 3 are pictures of Killian Court. 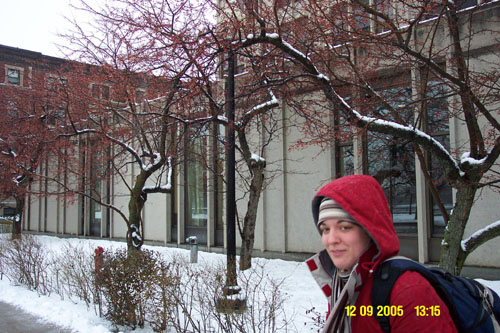 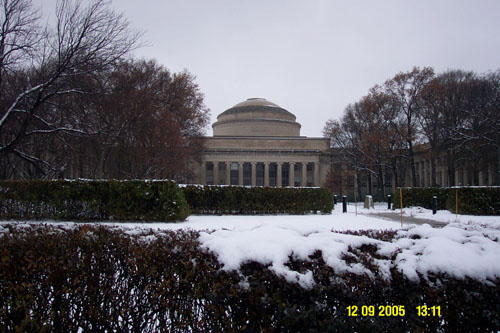 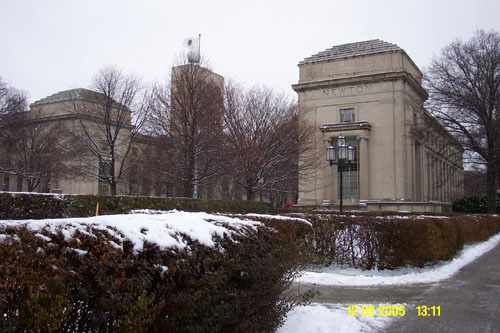 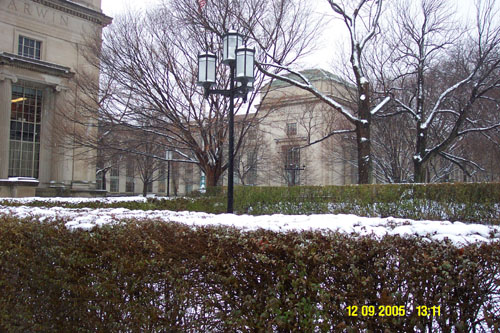 Once I was back in the dorm, I had two hours before my next class. On the way back towards the academic buildings, I was happy to notice that the weather had cooled down considerably so that it was snowing for real. On the way back to the dorm an hour later, I was less happy to notice that the snow had developed into blizzard-like conditions. I was able to make good use of the underground tunnels to get from Building 54 to the main academic buildings without going outside. =)

An hour later, the snow had pretty much stopped (crazy!). I was getting ready to go outside and play in the snow with Sarah when the 223 suite came to get their revenge for the night before. I’ll let you guess what happened from these pictures: 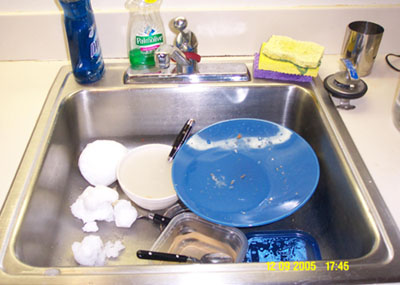 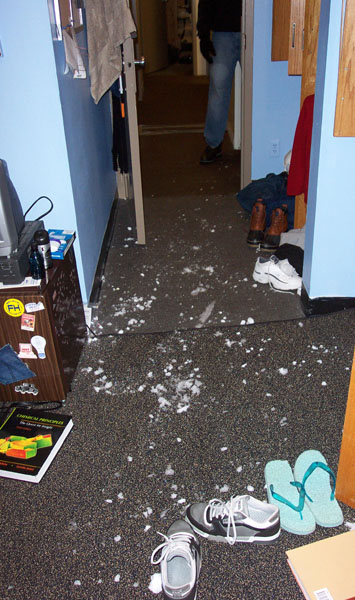 Then I played in the snow, baked some cookies and brownies (ok, so Becky and Sam baked and I ate their food), and watched a movie. And that was my week.

And in anticipation of your next questions: yes, I actually got my work done. And showered regularly. See? It is possible!

Responses to comments:
Heh. Looks like MIT sucks big time. I’m going to sunny Pasedena, California. CALTECH RULES!
Hey Mr. Anonymous, some people like the snow. So back off. =P

Tralza: Which [Harry Potter]book is your favorite?
No! Don’t make me choose. Oh geez. I’m a big fan of Prisoner of Azkaban, but I think Order of the Phoenix is my favorite. I know lots of people don’t like it because Harry is a brat. Maybe I’m just a brat too because I totally feel for him throughout most of that book.

Merudh: so hows the cafeteria food at MIT? you think I should start learning how to cook this winter break lol
Uh, I don’t really eat the cafeteria food so much. I know some people refer to Lobdell (the dining hall in the student center) as “Lobdeath,” and the food I’ve eaten from there has been rather bland, but edible. I’m a fan of Alpine, a place in the student center that sells bagels, pizza, and grill sandwhiches. But I just avoid cafeteria good altogether, so I may not be the best person to ask.

Clark Poland: I’m curious, but how much of the student body eats food prepared by themselves or other students as opposed to eating facilities on campus?
Uhhh…no idea. Sorry. I can say that residents of dorms with dining halls (Simmons, Baker, MCormick and Next) are usually required to buy into this preferred dining plan (where they pay a flat fee and then get to pay half price at dining halls), so those students usually try to get their money’s worth of it. At the same time, however, plenty of people who live in BC or New or other dorms without dining halls visit other dorms for food, but I have no idea how many of them there are.

Merudh again: anyway, how do i get a blog like this? Do I have to be an MIT student to get one these blogs…can I be a prospective applicant and get one? lol
Ben works in mysterious ways. Bascally, last year during CPW he told me he liked my (personal) blog and asked me to write for MyMIT. At that point I was already admitted although not really a student, so it would be even more of a stretch to write as an applicant. =) I’m sure if you express your interest to Ben, he’ll keep it in mind as he looks for ’10 bloggers.

Jane: Ooh, here’s a question: you’ve totally confused me about where you actually live: is it connor 2, 3, or 4? :)
Let me put it this way: my roommate lives on Conner 2. I have lots of close friends on Conner 4, so I used to hang out with them on weekends a lot and stuff. As I spent more time with Becky and Sam, I got to know and love all the rest of their floormates as well, to the point where I go up there to do work with them too. I sleep, eat, and shower on Conner 2, but that’s about it. So the joke was that I should just tell people that I live on Conner 3, because it’s halfway in between. A better way of putting it would be to say that I live in the stairwell between Conner 2 and Conner 4. =)

Edward: How many people do you think work on psets on their own?
Uhhh…no idea. It’s really hard to tell. Most people collaborate, and a lot of the psets are generally designed for that anyway. Some people prefer to try to force their way through it and only look for help if they get stuck. Maybe those people are just smarter. All I know is that I tried that a few times and didn’t get very far before getting stuck. =) I can’t really give you a number, but it’s definitely a small percentage of people who work on them on their own.

So, that answers just about every question ever asked of me. Whew. If you feel you asked a question that I never answered, I totally missed you and I’m really sorry so please ask again. =) Also, I’m trying this new policy where I just answer questions immediately after they’re asked instead of saving them up for a Q&A entry, so ask away my friends. Parents too!

Also, now that I’m spending more time on CollegeConfidential, I’d love it if you CC people would identify yourselves! If you post to CC and comment on my blog, I’m sure you’ve somehow left clues that can help me match up the 2 identities, but there’s no way I’ll ever be able to figure it out. So if you comment here, mention your CC name. Or something.

Also feel free to PM me on CC or email me (see the banner for my email address) if you have more personal questions.

Whew. There was one marathon entry. Next time I’ll try real hard to write about my antics as they happen.

Have a great day!