It's late, but not too late.

I am done with finals and very excited about that; you may be able to detect some of this excitement in my entry.

In seventh grade I learned from Mrs. Gekas that ART IS EVERYTHING! Here are three pieces of modern art that I appreciated during finals week:

For 10.213: Chemical Engineering Thermodynamics, we got four review sheets for the final. I know someone once commented on Laura’s blog about getting cheat sheets for exams… you may ask yourself, does this dilute the challenge of the test? Well, no, because they write the test expecting that you have transcribed every equation, relation, and tidbit of information from the lectures onto one of your four sheets. 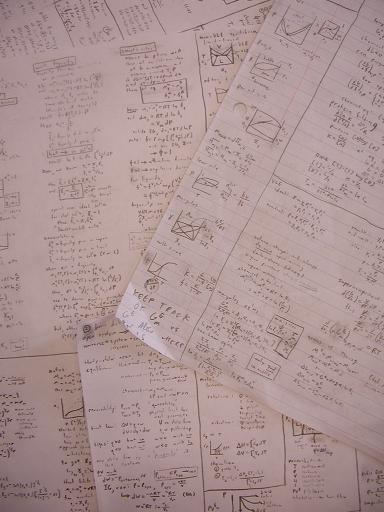 The most review sheets I ever had for a class was 12, front and back, for 5.07: Biological Chemistry. There’s something to be said for essentially being forced to copy out every intermediate in every major metabolic pathway. I’m not sure what that thing is, exactly, but I sure learned a lot.

Later in the week, our housemasters Roe and Bronwyn, both of whom have awesome names, hosted the palindromically-entitled “stressed=desserts” study break… where you turn your stressed attitude around with desserts. They had like a googol pies and a cupcake tree and pure Breyer’s ice cream and cheesecake.

But most importantly, they had a chocolate fountain.

I don’t think you get how cool this is… 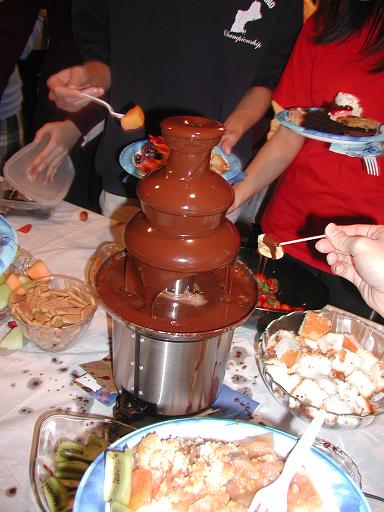 Of course, I was cautious around the fountain after performing some back-of-the-envelope calculations to determine to what temperature the chocolate had to be heated in order to increase its kinematic viscosity enough to flow at the required rate.

Just playin’. Fact is, I was utterly entranced by the fountain, and not just from an engineering perspective. Luckily, I snapped out of it in time to continue on my merry thermodynamical way.

And finally, Ruth continued in her artistic adventures by finishing up a long-incomplete mural in the 223 suite. 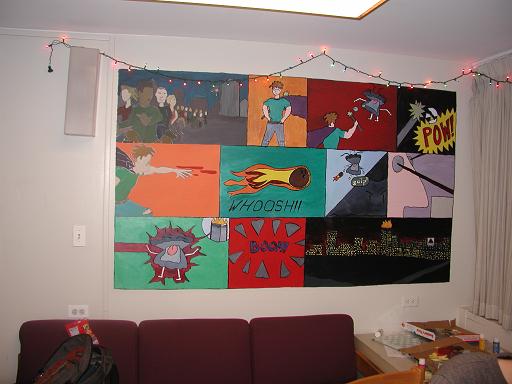 The plot: An evil clam comes to Boston to unleash ARSON ON MIT! Luckily, Super Fire Marshall Mike Short ’05 arrives to save the day. After deflecting the clam’s pearl barrage with the mace he made in his freshman advising seminar, Mike Short launches a flaming coconut at the fiend. Though the clam easily devours the coconut, Mike Short uses his eye lasers to finally destroy it–and the top few floors of the Prudential Center, by accident.

Based on a true story. Well, Mike really did make a mace in his freshman advising seminar, he smashes coconuts with it, he likes to set things on fire, and he once hooked a rather powerful red laser up to his glasses.