DID YOU KNOW? Although three members of Queen routinely sang lead and backing vocals, the opening chords of Bohemian Rhapsody are sung entirely by Freddie Mercury, recorded on four separate tracks and mixed together.

München! I went to München! Or Munich. But München is more fun to say, and it’s got an umlaut.

I just realized that I had a commenter a long time ago who claimed to be from München. So he will probably comment again and tell me that I should have contacted him, because I only ended up visiting the tourist traps. Well, I never said I was a role model. But as far as tourist traps go, I did go (briefly) into the Hard Rock Café. I briefly contemplated buying a Hard Rock Café: Munich t-shirt, because that is just an awesome gift for somebody, but I looked at the price tag of 24 euros and decided that, with current exchange rates, I didn’t like anybody that much. 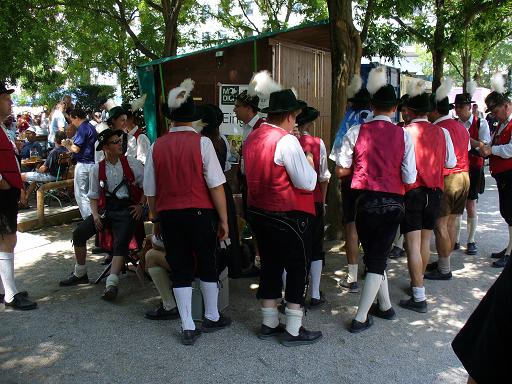 I don’t know if it was just the Germany-Sweden eighthfinal World Cup match taking place in Munich that afternoon, but there were a lot of people walking around in liederhosen, many of whom were even playing oom-pa-pa music on tubas. Do people always wear these in Bavaria? Because they are kind of uncomfortable. I know this because one time, as Captain Von Trapp in The Sound of Music, I almost had to change into liederhosen in 45 seconds, but somebody with a brain noted that as Captain Von Trapp escapes Nazi persecution hiking through the alps, he would probably opt to wear something that chafes a little less. 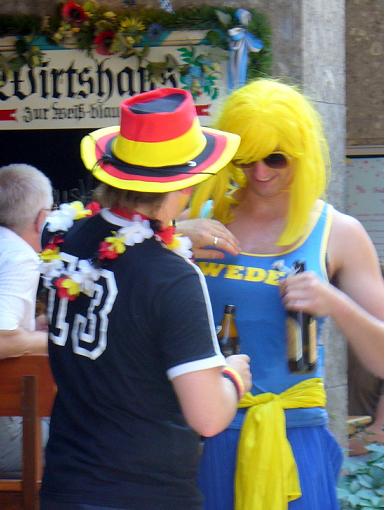 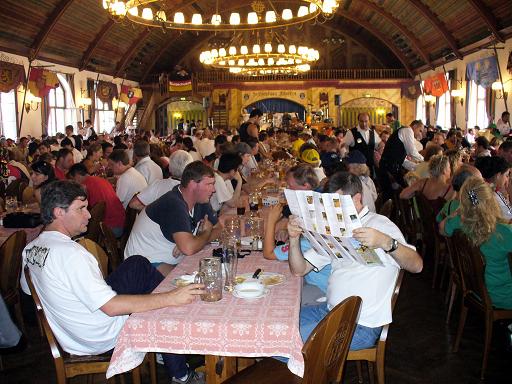 We ate lunch at the Hofbräuhaus, which is probably a little like Durgin Park in Boston, except I have never been there. This picture kind of gives an impression of the frenzied atmosphere within, but not really. As I said in one of my Nice entries, they really should teach you all about the foods of a nation before you go there, especially in a language so well known for its diverse vocabulary describing bizarre cooked and uncooked sausages. 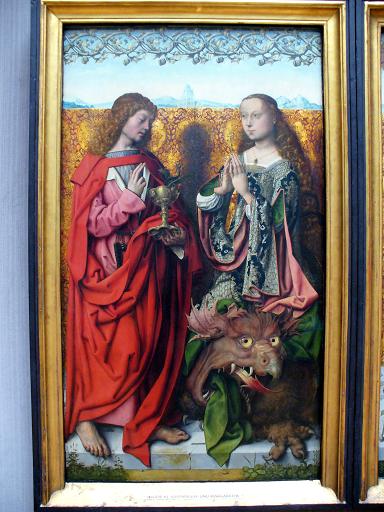 We also went to the Alte Pinakothek, which showcases a lot of old artwork. A lot of it was really breathtaking — in particular, I loved a withering still life painted by Jan Brueghel, but forgot to take a picture of it. Luckily, Wikipedia shows it as an example of his work. A lot of early artwork was really a lot more grotesque than I had previously thought. I also like it when there are depictions of Jesus’ contemporaries wearing Renaissance clothing, as (I think) shown above.

The museum features the largest collection of work by Peter Paul Reubens in the world. Apparently he really liked to paint tangled masses of naked people getting sucked up to heaven during the Last Judgment, because there were like four or five separate painting of his to that effect. 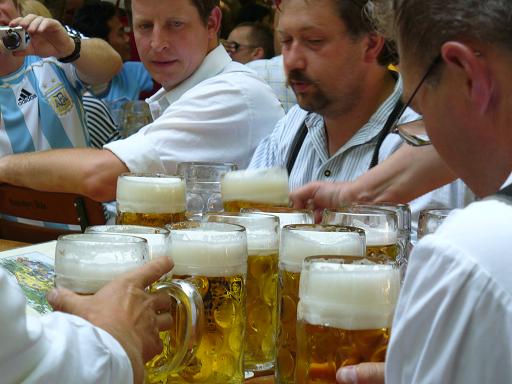 One thing I noticed about Germany is that it’s really hard to drink things. In most restaurants, it’s awkward to order tap water, and most beverages will run you about $US 2.50, for one can with no refills. In München, the standard size for any beverage is 1 liter, pretty much. Here, a dirndl-clad waitress has just laid down a second round of beers and an Argentinian fan finds this as interesting as I did. 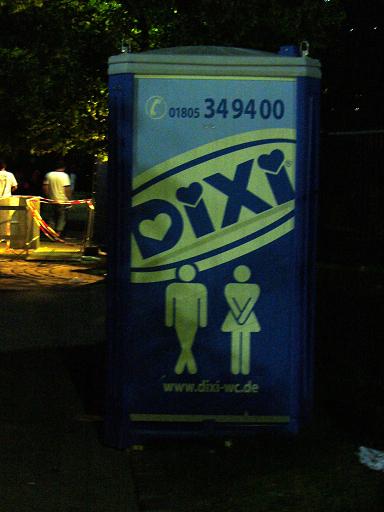 We went to the Olympic Stadium to watch the Mexico-Argentina game on Saturday night, but the only picture I took there was of the port-o-potty. Well, I’ve seen stadiums before, but I’ve never seen a port-o-potty with this picture on it. In the men’s bathroom at my job, there are two separate areas depending on what you need to accomplish therein. One is labeled with a drop of water and one is labeled with a man scratching his side. I did not know there were international symbols for those things. 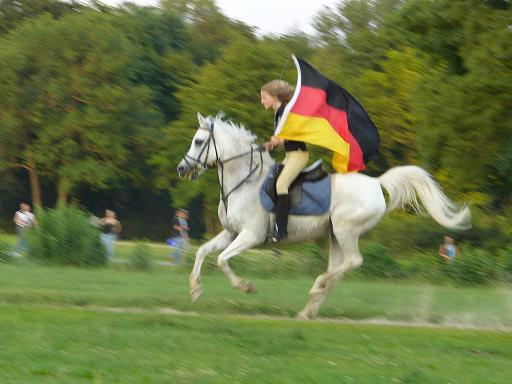 We went to the English Garden, a large Boston Common-type area downtown. Parks in Germany are a lot different from parks in America. For example, there are a lot of naked people in German parks. And people generally don’t seem to be bothered by that. Also, there are German women riding around on horses who look like this. I don’t know, maybe her Valkyrie-like riding was also World Cup-inspired. 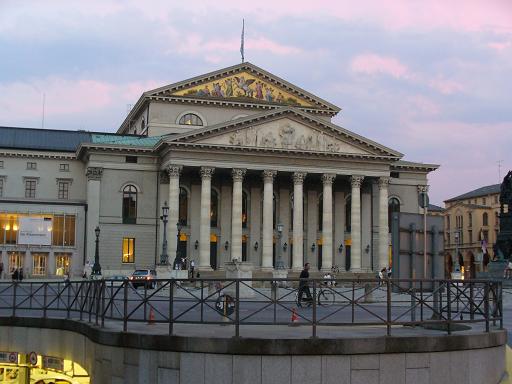 And here’s a beautiful building under a purple sky, because I needed something pretentious like that to conclude the entry.

True story: I tried to post this comment yesterday, but received a message (from myself) that I needed some time to verify comments from unregistered commenters and I would get to approving this comment at my earliest convenience. Since then, I can’t find the comment anywhere. Has anybody else been having trouble commenting? If so, sorry.

Mike — Well, I’ve only taken one class in bio (7.06: Cell Biology), but I’ve been told by fellow bio majors that MIT grad school is great for molecular and cell biologies, but not quite as good for studying anything larger than a cell. We don’t have a med school, so if you want to study anatomy or things like that, it’s better to look into HST, a joint program with Harvard.

Kash — Honestly, I don’t know what the “average” GPA of admitted students is. There’s no minimum GPA or anything, and I know people who didn’t get straight A’s or ranked 20th in their high school classes and still got in (and they didn’t go to super-competitive private schools either). In general, higher grades are better, but it’s also good for you to take the most challenging classes that are offered at your school and do as well as you can in them–if your school has AP/IB, you should take at least a few of them in the areas that you are most interested in. Improvement also looks good, so even if you don’t have great grades now, you’ve still got two years to bring them up!

Ruth — Well, I’m limited somewhat by the fact that I have only one pot and one pan, and even those were kind of stolen by my roommate from Bayer. I didn’t want to invest in cookware because I’m only going to be here for three months. I also didn’t want to investing in spices, so I took a page from the book of Ling and bought a 69-cent bottle of grill seasoning, which I sprinkle in every dish I cook, from spaghetti to fajitas. My Indian roommate is also teaching me how to properly execute Indian cooking, so watch out Apple Bake.