Because one story just isn’t enough by Keri G. '10

My tale of being admitted. Laugh. Cry. Both. Neither. All of the above?

In true “everybody else is doing it, so why can’t we?”* fashion, I’m posting my own tale of being admitted last year. Since this is the second year that EA acceptees were sent cardboard tubes, I thought my story would be fun to read. Be warned – I may (read: will) overdramatize a good chunk of this, solely because I can.

Three people from my school applied EA last year, and we were all insanely worried about our decisions. The day tubes made it to South Florida, Neha ’10 (that’s Mr. Neha to you and Jess) got hers during our Calc BC class – her mom was home when the mail came, so she drove to school to give her the tube. Kris ’10 and I were in the same class and left to think about how our fates were still unknown and great, Neha had gotten in! But what about the two of us? What was going on? WERE WE IN OR NOT?

Needless to say, everything our teacher said about Taylor Series did not exactly register.

But that’s not the point here. (We were all accepted, by the way, and now the three of us are here.)

Since I just tried to rewrite this story and did so poorly, I’m essentially copying and pasting the post I made in my personal blog a year ago. Enjoy.

So after an impossibly long bus ride, I dashed home to check the mailbox.

My parents are in NYC at the moment (today’s their anniversary – they’ve been gone a week), and my stepdad keeps the mailbox key on his keyring, so I was essentially screwed. I yanked at the box, hoping that it was by some divine miracle unlocked.

I ran into my house and searched all the counters and drawers for a key that might quite possibly open the mailbox. Not a thing. Some higher power hates me.

I called my stepdad, who said, “Don’t worry about it, just calm down, we’ll be home tomorrow and it’ll all be fine.” And I’m like, “NO! You don’t understand! Must have MIT decision NOW NOW NOW or else I’ll die!”

He handed the phone over to my mom, because he didn’t seem to know how to handle a neurotic college applicant waiting for a decision. (Come on, who can blame him?) She wasn’t much better – her words to me consisted of, “Don’t panic, when we get home you can get into the mailbox and see what’s going on. Hey, we’re on 34th Street and we’re about to go to Chinatown, so we’ll see you when we come back tomorrow, okay?”

Thank you, mother. Your words of reassurance make my life.

I paced around the house, wondering what to do about the situation, and I saw only one way out: the crowbar.

…tell me, what kind of family doesn’t own a crowbar?! Don’t they understand that you can use it in desperate situations to break into things, like, you know, mailboxes?!

So I was panicked and worried and stressed to the max, when I saw one microscopic shot at knowing my decision.

I said to myself, Hey, self (give me some credit – I didn’t actually say that), what if I have a tube, and it’s just too big to fit into the mailbox? Don’t they usually leave packages like that right by the front door? What if it’s there RIGHT NOW, and I didn’t notice it?

I ran to my front door, wrenched it open, and there, behind the potted plant that always obscures virtually everything around it…

…was a two-foot-long tube. 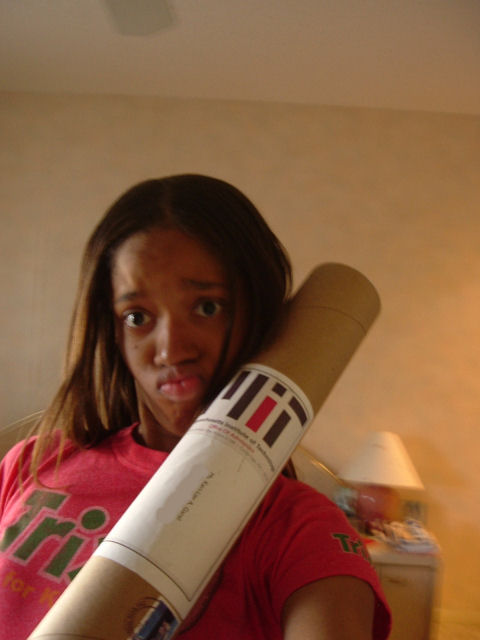 Yeah. I know. It was right by the front door, and of course I missed it when I walked in. Go ahead, laugh at me for overreacting and nearly resorting to brute force. I may have absolutely no common sense, but I GOT INTO MIT!

I want to dance around for the rest of the day, I swear.

You know, I think I will. Bring on the music.

Decisions online? Pffft. This seems so much more fun. The heart-attack-inducing suspense! Come on! ^_^

One year later, it is the END OF TERM. Well, almost. Classes are over, and they’ve only given way to studying for FINALS GAH. It’s hard here, but definitely worth it.

Coming up: a day in the life of… well, me. And anyone else who cares to be in the pictures I’ve taken.

*Speaking of, that’s the title of a really good album by The Cranberries. Just sayin’.

15 responses to “Because one story just isn’t enough”