At MIT, your spoon is too big.

In times of economic crisis, Random Hall perseveres in upholding the traditions that temper the pains of work and study with the welcome relief of warm homemade dinners. A late-evening meal at Random Hall tonight was prepared by a group of residents on Pecker floor and generously shared between the entire constitution of Pecker, plus a few friends from neighboring floors who longed for the remembered taste of home-cooked meals.

One spoonful of corn chowder was allotted to each resident, provided that the partaker of the feast brought his own spoon and provided that said spoon wasn’t unreasonably big.

After each person had consumed his first spoonful of soup, the cooks gave permission for seconds. Unfortunately, nearly everyone was so satiated by the first spoonful of chowder that Pecker was left with half a pot of leftovers, which by extrapolation should be plenty to feed the 14-person floor for the next week or so. Paul Christiano ’12 was the token exception, consuming his first serving using a tablespoon and subsequently switching to teaspoons whose volume capacity decreased in a geometric series. It is predicted that Paul would have finished the entire pot given infinite time.

Katelyn Gao ’12, who reportedly was “too hosed” with homework to participate in the social event, eventually succumbed to the satisfied murmurs of soup-slurping outside her door and went into the kitchen to enjoy a free dinner.

Remarking on the quality of the chowder, Kenan Diab ’11 commented, “Yum.” A Junior currently enrolled in 14.01, he expressed a desire to visit Trader Joe’s, a local grocery store frequented by MIT students and hockey moms, for the purpose of buying more chowder and stimulating the economy.

The floor dinner was generally considered a success, feeding 15 students in total for less than 0.1% of the average in-state college tuition for 2008-2009. 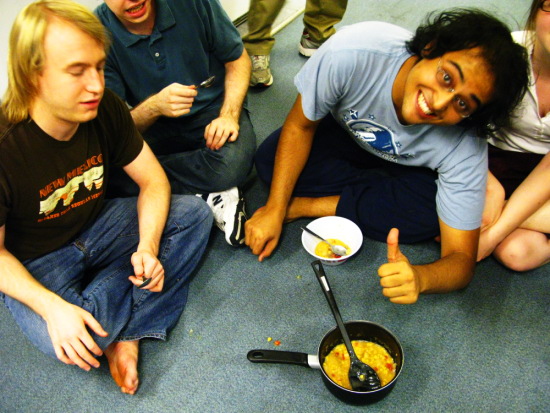