A little too much thinking brought to you by four in the morning.

I’ve been doing a lot of thinking about lives lately, in multiple senses of the word. For one, my floor is playing Assassins, or “Spoonsassins”, in which one is given a spoon and a victim and told to “kill” their victim by finding them spoonless off the floor and tagging them. Upon killing, one absorbs their victim’s victim, and so on until one person is left. This creates all sorts of interesting mind games in which some people shout their victims’ names from the rooftops, some people keep quiet, and some people send their victims threatening emails with photos of a Malaysian baby with the words “I’M WATCHING YOU” scrawled across it in red. 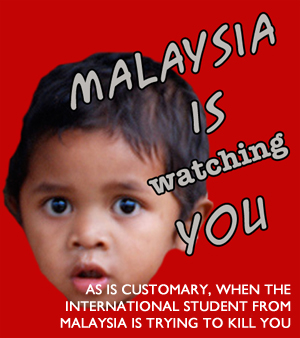 I am lucky to still be alive, having brought my spoon dancing, running, sleeping, and sometimes swimming, and also having become extra cautious of all Malaysian babies in my way. As this week the spoon changed to toothbrush, if you happen upon me anywhere in the greater Boston or Cambridge area you should know it’s not because I’m just that vigilant about dental hygeine.

In another sense, I’m taking a fiction workshop this term taught by Pulitzer Prize-winning author Junot Diaz. It’s the first fiction class I’ve taken in a long time, maybe even since middle school, and the combination of such an inspiring professor with the fact that I’ve been at MIT for four years and have never thought to take a creative writing class before have quickly transformed the twice-a-week, hour-and-a-half sessions into something I eagerly look forward to. We write, we read, we read other’s writing, we write about other’s writing, and we write again. Sometimes our assignments are as simple as a seven page story, and other times they’re as specific as “Write a four-line conversation in which the characters in Meder’s story have a conversation with his parents, to highlight the isolation one feels in returning to a place that’s supposedly your home to the people who supposedly know you.”

Professor Diaz is a fascinating guy to study under as well – during these sessions he strides around our overly large square workshop table, stopping occasionally to think out loud with his hands extremely close to your face, or to encourage us all to volunteer – “Come on guys, we’ve got to get you more enthusiastic about volunteering. This will be very helpful for our future, when we’re all drafted in the military.” Last Tuesday as we read a fellow student’s story about a mother with a brain tumor and the son that cares for her, he urged us all to think of what the mother wants. “When we’re talking about the pathology too much, we’re not talking about the character,” Junot Diaz says, and I think about his full name in my head, like when you meet the Prince of Morocco and you add “says Mohammad VI, Prince of Morocco” every time he says anything. “How many times have you seen that ‘I am not my disease’ ad? How difficult is it to maintain an autonomous self when everyone wants to reduce you just to this disease?”

“What does the mother want? She hasn’t gotten anything back. Have I really given my characters what they want? More than just what I want?”

I thought about this some more as I left class that day. Each character that you write, even though they may just live in this universe that you’ve created, has wants and needs and dreams and desires, too, and even if you write about interesting things that don’t often happen to people (my latest story was a happy combination of bipolar II disorder, psychotic schizophrenia, domestic violence, and miscarriage), you’ve made them real. They have lives, too. And by extension, they desire things and dream of being something greater, just as you do.

Which brings me back to my own life.

I have always wanted to be a writer. Just like I’ve always wanted to be a farmer, cowboy, obstetrician, or one of those clowns who makes balloon hats. Some of those dreams kind of got lost along the way, and as an MIT senior, I spend a lot of my time wondering if writing has become one of them. Three years prior to Junot Diaz’s hand being incredibly close to my face, my favorite high school English teacher sat me down and told me she didn’t think MIT would let me reach my full creative capacity. Although it was more tactful than my sister’s words, who told me that if I went to MIT I would die before the age of nineteen, it still stuck with me that someone who believed in me thought I wasn’t supposed to be a scientist.

I am twenty-one now, and if I fall off a building now I will have been twenty-three months past my predicted date of expiration. Which is, notably, not too far off the age of milk in my fridge (though I am in my second decade, I am also nowhere near adulthood). Inability to throw things away aside, I am getting to that age where people from professors to the guy who mops my dorm bathroom keep asking me what I am going to do with my life, and I just don’t have any idea.

For a while it was “astronaut.” This vocational path quickly fell to the wayside when I realized the department of aeronautics and astronautics was filled with undergrads floating down that zero gravity canal of self-destruction. Not wanting to prove my sister right before my first semester was over, I settled on course 9, brain and cognitive science. Brain and cognitive science is a great major if you want to do a lot of thinking about other people thinking, which seemed just convincing enough to me to convince other people that I was thinking about what they were thinking and also thinking that I think I know what I’m doing.

“You think or you know?” They would ask, scratching their heads.
“I think.”

It all sounds so funny because MIT is one of those places where a lot of people really know what they’re doing, where they’ll be in five years, and what color socks they’re wearing tomorrow. They probably won’t be matching socks, but I’ll be damned if they’re not olive green and striped brown. In five years, they’ll have won the MacArthur Genius Grant for their work on nanophotonics, and there was never any question of what field they would devote their life to because it’s all they’ve ever wanted to do. And then there are people like me, who haven’t yet decided if they want to wear the grey sweatpants, or the red ones today. (It’s looking like red, but it’s still a little too early to tell. I’ll get back to you on this one.)

This is absolutely not to say that I think that MIT was the wrong choice for me. I’ve truly loved the coursework and the material I was digesting, my intellectual restriction enzymes chomping along merrily on 9.12 (Neurobiology Lab) to 9.15 (Biochemistry and Pharmacology of Synaptic Transmission, which I love a little bit because of the mouthful of the full course name). But just when I realized that I very much enjoyed mulling over the complexities of selective serotonin reuptake inhibitors, I also realized I was a senior, the time when all the bright-eyed and bushy-tailed kids you once sat next to in 8.02 suddenly have suits and job interviews at places that supposedly offer a diverse and challenging working environment that will utilize your analytical problem skills and critical thinking, diving into a job market that’s essentially stacked against young people everywhere.

I am exploring my options as of now, but I wanted to write this post to tell you a little bit about my life right now, why I’ve been a little lax on posting and how our lives are suddenly so similar. As you fill out your college applications and ask for recommendations and worry about that one not-so-fantastic grade you got in AP Chemistry, whatever that may have been, rest assured I am just as confused and hopeful and optimistic and worried about the future as you are. It’s my life, I think, and it’s all of our lives that we need to think of as writers, but at least we have a leg up on those fictional characters – we don’t have to sit around and wait for someone to write it for us. We are more than what someone writes about us in the paper, whether it’s the New York Times or whether it’s something we wrote down in a 250-word personal statement about our biggest challenges. We have a say.

Hopefully, we’ll get it right.

Best of luck to you all, and please feel free to email me with any burning questions about admissions, life as a student here, or what color sweatpants I finally decided on. (We’re back to grey as of now.)