This one goes out to the one I've left behind.

DID YOU KNOW? According to Wikipedia, “An article from The Onion appeared on the 2005 Advanced Placement English Language and Composition test, in which students were asked to write an essay analyzing its use of satire.”

Ling ’07 had two of her MIT friends over this weekend and we went to D√Љsseldorf this weekend, I forget why, but the thing that we were most excited about was seeing a building designed by Frank O. Gehry. 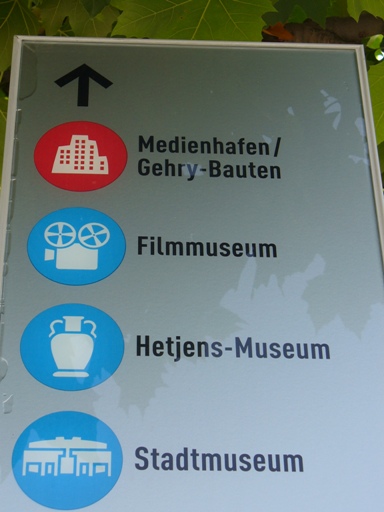 I actually really liked this sign, and think that we should adopt the funky building thing as the “international symbol for Frank O. Gehry architecture.” This is what the actual building looks like. 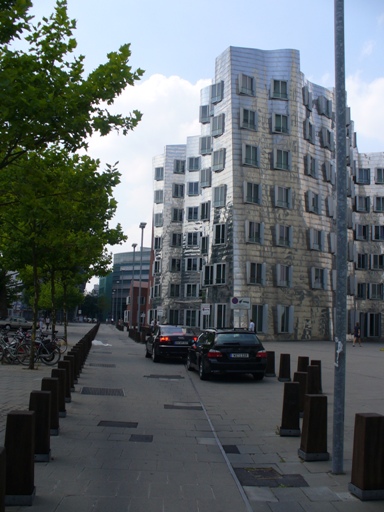 …not entirely unlike the much-discussed Stata Center at MIT, also designed by Frank O. Gehry and completed just a few months into my freshman year.

Now prefrosh, they ask me, “My mom saw in the Princeton Review book that she bought that MIT has one of the 10 least attractive college campuses. Is it hard going to school there?”

Yes, MIT is infamous for accumulating a collection of unusual and (dare I say) controversial architecture, including the Stata Center, Simmons Hall, the Media Lab, and a bunch of really weird sculptures. But sometimes unusual can be beautiful. Like Santino from Project Runway.

And so I say, “Well, even if you don’t like all the architecture at MIT, at least you can say that it’s different.”

Myself? Well, I think the Stata Center is interesting, if not necessarily attractive, and I think the inside is vibrant, if not necessarily practical. I take pride in biking under the Great Sail on my way to class every morning, because I think it looks kind of neat, in addition to its engineering purpose of diminishing the wind tunnel under the Green Building. I think Kresge is great, and I’m not sure who came up with the idea of a windowless brick cylinder for a chapel, but it doesn’t look bad in the context of the buildings around it. Now, Simmons, I just don’t like–the industrial space waffle aesthetic on the outside doesn’t work for me, and the inside is so gray and full of holes that I think I’d have horrible nightmares if I had to live there. But I don’t have to live there. And even if I would have drawn it in the housing lottery, REX would have given me the chance to change my housing once I had discovered that the interior gives me THE SHIVERS.

Which is the cool thing about MIT architecture–everybody has something different to say about it, good or bad. Not like some other colleges, where people probably sit around asking “Do we really need this much ivy growing on the walls?”