In which I describe my summer in words, without photos (yet). 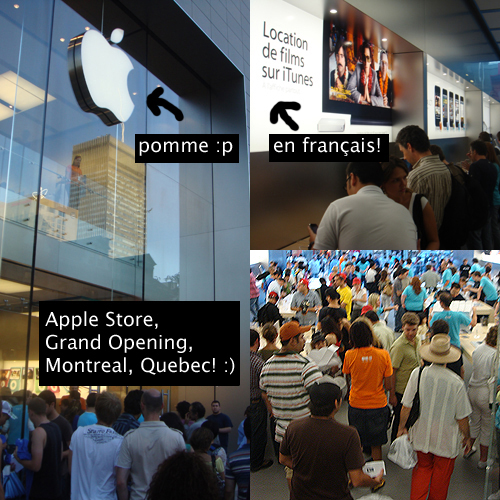 So I apologize for having disappeared (somewhat) off the blogs since school ended.

To be honest, this summer had been wonderful thus far. Here’s a brief recap of what I did/what I have plans for in the near future (pictures will come next time! – sorry, haven’t gotten time to upload everything yet =/).

Right after school ended, I hopped on a plane and embarked again on the epic 24-hour journey back to motherland Asia. (note: this time around, I’ve discovered economy seats that felt that business class -> read: the first row of each economy “section” on the airplane. so much leg space! =D) It was a fun time of relaxation, going back to my high school to visit (the “juniors” were graduating), sleeping till noon everyday (which I basically did at MIT during the school year anyways (because my classes started so late), haha, but I went to sleep earlier in Taiwan), and eating great, cheap, awesome Taiwanese food again.

I travelled all around the island, generally visiting friends, and also took a short trip with family up to Nagoya, Japan in the middle of June. T’was a nice break from the rigors of MIT during the term. Whee – no physics for a whole summer! =D

During the last week of my stay in Taiwan, I went up to the mountains with a Taiwanese health outreach group (think Doctors Without Borders – Taiwanese style) to help the Taiwanese Aborigines. For three days, we set up mobile health stations (complete with registration, diagnosis, pharmacy, aid (free food), blood analysis stations! (yes – we could test for HIV, hepatitis, blood sugar, cholesterol, liver function in our mobile blood analysis table in just 30 minutes! this is faster than your conventional hospital =p)) in the remote mountain villages (often with blackouts and without cell phone reception). Most of the Aborigines were suffering from common diseases like high blood pressure, complications caused by excessive drinking/smoking/betelnut chewing, and joint aches due to age. Thus, there weren’t many severe cases that required advanced medical attention, but it was a very worthwhile experience – in all my years of living in Taiwan, I’ve never had so much contact with the Aborigines. I really realized that on a very basic level, it’s not so much that they need the medicine – but it’s the talking and the friendship that we provided that they valued the most.

As nice as tropical Taiwan is, it’s again time to return to MIT. I’m living in Baker this summer, in a room with really poor ventilation (but an awesome view of the river!! woo bakerites!). For the first week or so (before I bought a fan, finally), the room would get up to 95+ F in the middle of the night, which had me wishing for some of the 20 F coldness that we had during the winters (never thought that I’d say that). But anywhoo, I was back in MIT to do research.

As I had alluded to in previous blog entries, I’ve been working on genetic manipulation and expression of C. elegans since February this year. We’re primarily interested in the MAPK pathways that regulate expression of genes that contribute to the immunity of the nematode. Translated into laboratory terms on a day-to-day basis, this means:

-A lot of picking worms up with a special pick made out of glass pipets and platinum wire under an optical microscope.
-A lot of looking at fluorescent worms (worms that has GFP – a protein that gives it a neon green glow – expressed in them) under a fluorescent microscope to determine which worms contain our alleles of interest.
-A lot of PCRs, gel electrophoresis, and taking pictures of gels under an UV camera.
-Mating worms (which is really simple in theory – you put the worms with the hermaphrodites – but so time-intensive because you have to find all the males first! (which generally accounts for 2% of the nematode population – talk about gender inequality)).
-Designing primers for genotyping PCRs (a lot of ATCG work)
-Interpreting DNA sequence results after we sequence alleles of interest for mutations (more ATCG work).
-Making and utilizing “killing plates” (plates that contain Pseudomonas, a bacteria that’s lethal to worms). We isolate the mutants that seem to have prolonged immunity response to pathogens and put them on the Pseudomonas plates to see if they actually do live longer, when exposed to toxic bacteria.
-Daily laboratory work: making petri-dishes, growing bacteria (e. coli – what the worms eat), making gels for electrophoresis, running plates over to the MGH DNA Sequencing Center, making chemicals, messing around with Qiagen kits…etc.

I’m still working in this lab for the summer (only for five weeks though) – I’m learning a lot, and I’m fully intending to write out a more detailed entry of exactly what it is that we try to do, with pictures! (my description above is greatly abbreviated and probably quite confusing)

As for night time, I teach AP World History for Junction, an ESP-run program that teaches full academic courses to high school students during six weeks of the summer. I co-directed the ESP SAT Prep program last term, and it’s been amazing working with ESP. ESP is a totally awesome student organization that provides quality, MIT-student-led courses (from “Teach Anything You Want!” in our Splash! and Spark! programs to rigorous AP or university-level classes in our Junction and Delve programs) to high school students in the Greater Boston neighborhood. This summer, since I’m going to be here in July, I signed up to teach APWH, and I’m thrilled to have a group of awesome high school students (we went and watched Wanted together!). Anyways, so this is what I do every night after I get off from work (the program runs M->R at nighttime for 1.5 or 2 hours, depending on the day).

(Want to see my APWH notes for the kids?)

Aside from UROP-ing and Junction-ing, I’ve also been doing my share of travel. Aside from the Boston festivities, I also travelled to NYC (I’m so in love with that city) last weekend, and I just got back from Montreal on a three-day weekend trip (wheeee!) :)

And this is where I’m at, right now, for the summer.

Remember that Taiwanese health group that I mentioned up top? I’ll be spending most of August traveling with them to Central America, where we’ll be visiting the countries of Panama, Nicaragua, and Honduras during a lot more of what we did in June, but on an international level. Aside from helping people and learning more about public health medicine (which is something I have a lot of interest for), it’ll also be a wonderful time para practicar mi espanol. I’m really looking forward to this. :)

Hope this explains my absence, and look for pictures eventually!

In the meantime, enjoy your last month before MIT! Be ready for three weeks that would rawk your world. (pre-orientation (FPOP), Orientation, Rush Week) =D