So is my life, but not to such a great extent.

DID YOU KNOW? The pretzel, invented during the 8th century AD, is shaped to remind the consumer of a child’s arms folded in prayer.

6 days. I haven’t written a blog entry in 6 days. God created the Earth in six days. Me? I’m a slacker.

Well, here’s my excuse: it was a four-day weekend and every single day of the weekend was the most beautiful day ever. So I would sit down to write something, like a blog entry, or a statement of purpose for grad school, or a practice GRE essay, or one of my many assignments due Wednesday, and I would just be like, “Oh, oh, oh, it’s such a nice day. How can I look at a computer screen right now?” And I would stare longingly out the window. Then when MIT went back to class on Tuesday, it started raining. And I was like “RAWRGH! I HATE MIT AND WANT TO EAT MY OWN HAND!” So that wasn’t a good mindset for writing a blog entry either.

But then I saw Colin Jackson tonight and I was reminded of, well, awesomeness in general. So I thought I’d write about some of the more awesome things that have befallen me over the past few weeks, just as a recap.

A long long time ago I used my camera phone to take a picture of Katie? ’10 pinning. 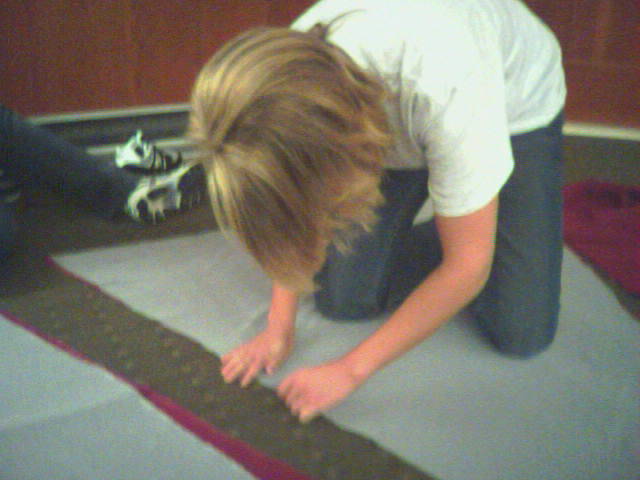 The MIT Marching Band had a capemaking party, uh, one of thosee weekends ago. Why a marching band needs capes, I didn’t ask. But I stuck around there for 3 hours cutting and sewing before I had another commitment and had to head off. The rest of the band, much more bandcore than I, spent a total of 7 hours making 20 beautiful blood-on-concrete capes for the band.

These did prove useful for our director at the Anything But Clothes party that evening. We also wore them last weekend to a women’s rugby game. Our eventual goal is to play at least once at every sporting event offered by MIT (remember Marching Band on Ice?).

As I discovered, rugby is really violent, okay? You know what is not violent? Jon Stewart. Let’s talk about him for a while. My fellow Tau Beta Pi social chair and I planned a trip to see him, because we have like thousands and thousands of dollars that we need to spend on people. He had some great material about Marie Antoinette and did an outstanding impersonation of Dick Cheney, but he also did material about computers freezing and Y2K. It’s like, seriously Jon Stewart, stick to Keira Knightley slander videos and whatnot.

Sometime later that weekend–I don’t remember exactly when; it was all just one lovely ray of sunshine to me–I took a bike ride over to Trader Joe’s, which I have been doing more often now that they are priced competitively with Star Market, a more traditional supermarket just a stone’s throw from MIT campus. Orange juice was only $1.99. 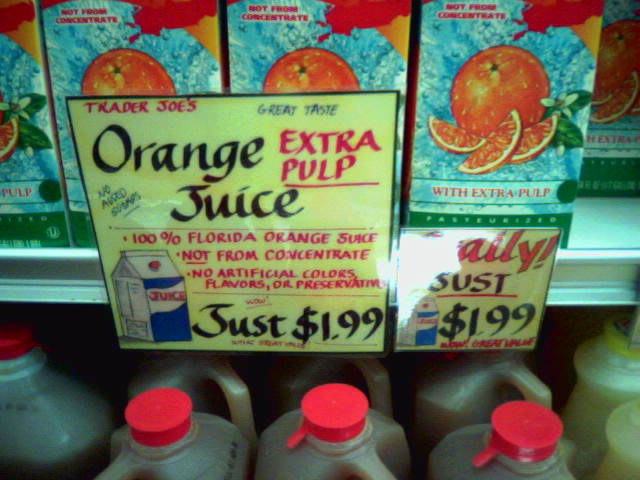 Actually, I think this is part of Trader Joe’s’s pricing strategy–they package everything so that basically every item in their store costs just about $2. And then you look at it and you’re like, “$2 for yams? $2 for orange juice? $2 for zucchini? $2 for fabric softener? $2 for 7-grain bread? $2 for frozen mango chunks? How can I resist?!” And then you bought like 40 things and you can barely even carry it home in their giant recycled paper tote bags. JOE WINS AGAIN.

A long time ago I found this pair of really neat green corduroys at The Garment District. They were like $6 or something. I was happy, like when you find 50 rupees in Legend of Zelda: Link’s Awakening. But Wednesday I was ECSTATIC, because PULITZER PRIZE WINNING COMPOSER JOHN HARBISON OWNS THEM TOO! Oh wow. Pffft. Unfortunately, I wasn’t wearing them that day, because I had to give a presentation on Charles Ives’ Concord Sonata, during which I made Pulitzer Prize-Winning Composer John Harbison laugh, intentionally. Ives was awesome too, you know? He wrote music while working as an actuarial clerk for $5 an hour and the world was like, “Ives, your music sounds like it was written by an insane clown. I’m just going to ignore you now.” But then like 50 years later people discovered it again and thought, “Hey, this is really cool! I like the part where you slam on the piano with the 14.75-inch plank of wood!”

Oh and then I got to watch Project Runway last night with Bryan and Mitra. I’m personally rooting for Uli, but probably only because she is German.

I’m sure my life was awesome in other ways recently, but I don’t think you’re going to read much further and I am so excited right now that I might pass out if I keep blogging.

8 responses to “Colin Jackson is awesome”