Conversations with graders by Laura N. '09

And other ramblings of a frosh...

As promised in my last entry, it has been quite a week! 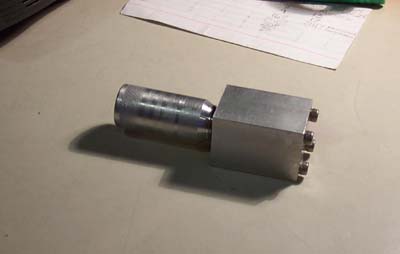 Now I can use a milling machine and a lathe, which I think makes me pretty cool, thank you very much. I got to put those new skills to work just last night, when I helped turn (turn= verb for using the lathe to machine something) a pin for the pedalbox of the FSAE car. So far for FSAE I’ve made minor contributions to the frame, the body mold, the steering rack, and the pedalbox. Oh, and the wheels, but I’m not sure if the part I worked on will actually be used on the car. Pretty cool.

Wednesday I took an 18.03 exam. It was an adventure. I didn’t do nearly as well as I had hoped. There were a couple of concepts that I couldn’t quite remember how to do and a couple that I just plain left blank…but the cool part was that I got nearly 100% correct of the parts that I answered- including the ones I sort of blundered my way through. The good news is that I’m starting to understand more and more as time goes on- so even though there’s plenty of room for improvement, I’m confident that I actually will improve.

On Tuesday, my 18.03 TA handed out evaluations for us to fill out about him. I suggested that we work in small groups on the recitation problems, because well…I need help in 18.03. (More on that later.) On Thursday, he handed out the problems as usual and then said, “So on Tuesday someone suggested working in small groups on these problems, so why don’t we try that?” And I was like “hey! That was my suggestion!” It was pretty cool. I thought it was really awesome of him to go out of this way to hand out these evaluations and then actually consider our responses.

Speaking of 18.03…I am unhappy with my grader, but not because of the grade they gave me at all. See, I have this weird habit of…taking colorful notes with offhand comments in the margins, littering my scratch work with emoticons (smiley and sad and confused faces according to my feelings about my answers as I go through the work), and writing little notes on anything that I know will be graded by hand by an actual human being. For example, on the AP Physics test last year, there was some question involving all kinds of calculus that I’d never even heard of. I did my best from what I knew and understood, trying to make sense of the math as I worked through it. At the end of the page, I wrote my answer. Beneath that, I wrote, Whew. That was hard.

I’m not really sure why I do these things; I suppose its just one of my odder quirks, but I do it all the time. For example, on the last 18.03 pset. There was this one problem that was just so well-written. I don’t mean that it was a clever word problem, I mean they gave you some function and you had to go through this elaborate process involving complex exponentials and taking the real and imaginary parts of things and converting them back and forth and integrating and all kinds of nonsense…and then in the end, the answer was 4. I mean, it was some single-digit whole “nice” number. And then part B of the question involved some other manner of complex calculation (well, maybe it’s not so complex, but it seems that way too me…) and you get 7. It was just so cool. So after doing all the work, in the margin of the page I wrote something like, this question was cool because it was really well designed. Good job. =)

And when I got the pset back, the grader had written I don’t think you can suck up to professors through psets” ! This made me really angry. If I wanted to suck up to a professor, I wouldn’t write comments on something that only gets seen by some poor undergrad grader. I was tempted to write that (plus “so there!” at the end) on my next pset but well…considering that my grader…grades me…that doesn’t seem like the best idea.

After this, I was really worried to get back my 8.02 pset. You’d think that if my 18.03 grader didn’t like my complimeting the problem, that my 8.02 grader would be even more annoyed at the fact that I wrote This problem was worthless. =( at the end of question 2. (To be fair, I wrote this at like 3 AM. And the problem was worthless. You basically had to make up some numbers and do this meaningless calculation that taught you absolutely nothing about physics.) Well, my 8.02 grader had written. Welcome to physics. Get used to it. =( . I personally found this really funny. I think this just goes to show how people here are not happy unless they’re unhappy…. =/

Responses to comments:
Drew said about my recent hack entry:
That hack although not as extensive as some of the others is still pretty entertaining. The one that I remember was told to me by my interviewer who took part in the hack. Some years back they set up around the dome some lettering that had been rolled up a night or two before a presentation given for the entering class. The message was revealed at the start, from Dante’s work, “Abandon all hope, ye who enter”
That’s a classic. Actually, my roommate’s dad was in the entering class that was welcomed to MIT with that hack. She says he loves to tell stories about it all the time. =)

Mike said:
As a freshman, how did you decide on laptop versus desktop, and what influenced that decision one way or the other?
Hmm, that’s a good question. I have a laptop, but I honestly didn’t put much thought into it. I guess I just figured that a laptop would be smaller and easier to bring with me. I stayed with a friend of the family at Penn State once. Her roommate had a desktop, and it just struck me as so big when put into a college dorm room. *grin* To be fair, dorm rooms here are pretty big (well, mine is at least), but still, I think it’s just easier to have a laptop. That said, practically no one brings their laptops to class, although I know people on FSAE and other clubs like them because they can bring them to meetings so they can do work and show others what they’ve done. I think there are definite advantages to having a laptop, but I also don’t think that having a desktop would be a big problem.

Chris said:
heyyy, new jersey huh? where in jersey do you live? there is absolutely nothing to do in NJ…im from Linwood, basically right next to Ocean City.
I’m from Middletown, Monmouth County, right by Sandy Hook…..exit 114, if you want to do the parkway thing. And I like NJ! Although it’s probably mostly because now that I live with people from all over the country I get harassed about it all the time and feel an intense need to defend my home. =)

14 responses to “Conversations with graders”