Spain doesn't do sarcasm, and my soul is slowly dying. But then I took some pretty pictures, and it was all okay.

In my last entry, Meagan said, “Anyways, could you please do an entry on some of colloquialisms that you are learning? That would be awesome. :]”

Yeah, sooooo, I’d love to, but see, most of the words that my new Spanish friends have taught me may not exactly be appropriate for posting here. Seriously, a couple of weeks ago as we sat in a bar and watched Spain beat Russia in the qualifying rounds of the Eurocup, they taught us Americans all the important insults they thought we needed to know. But let’s see if I can find something useful AND repeatable. =)

Okay, first of all: the famous breakup phrase. In Spanish, “It’s not you, it’s me,” becomes “no eres tú, soy yo.” The translation is almost exact: “you are not you, I’m me.” So, the English makes more contextual sense (what you’re really saying is “the problem IS not you, the problem IS me”), but the Spanish makes more grammatical sense, because you actually conjugate the verb to match the subject. The same thing happens when you answer the phone, “soy yo” (“I am me”) instead of “it’s me” (“the person you are talking to is me”). I might be turning into a linguistics nut, but I find this utterly fascinating.

I’ve always hated the expression “the straw that breaks the camel’s back,” because it’s so useful but so ugly! I mean, a camel? Come on. Where did THAT come from? Why isn’t it at least a horse or something? Well it turns out that the Spanish expression for this is “la gota que colma el vaso,” or “the drop that overflows the glass,” which I think is a much better expression. Now I can just switch to Spanish when I want to express that idea.

Which is the beauty of knowing 2 languages. I’m finding that sometimes I just need to switch to Spanish. You know how when you can’t think of the exact word you want to use to describe something, there is this feeling of relieved satisfaction when you finally figure it out? It’s actually kind of silly, because you never really need that exact word, you get your point across just fine by basically describing the definition of that perfect word. And often your friends will say, “ah! I know exactly what you mean, but I can’t think of that word either!” At that point, the continued pursuit of this word is sort of pointless, but you do it anyway, for that great moment when you say, “aha! That was the word I was thinking of!”

Well I’ve found that sometimes Spanish just gives me that more satisfied feeling. And it’s usually for the stupidest words. For example, for some reason I cannot figure out, I just much prefer the word “parecido.” It means “similiar,” as in “these books are very similar/estos libros son muy parecidos.” I mean, of all stupid, boring words. But for some inexplicable reason, “parecido” just says so much more about the relationship between the books than “similar,” and I have no idea why.

Another great Spanish word is “tonterías,” which are stupid little things. It’s basically the word “nonsense” in plural noun form, and I absolutely love it.

I’m coming to realize more and more how few words have exact translations. Gato is cat. Ok, that’s pretty exact. “Gato” and “cat” are the same word. “Parecido” and “similar” are aaaalmost the same word, but not quite. “Nonsense” and “tonterías” are NOT the same word. I double checked this theory with my friend Martin, who is natively bilingual, to make sure I wasn’t just making things up. And he completely agreed with me, “yeah, parecido and similar are different words, aren’t they?”

Also, cursing. This is quite amusing. I will try to explain this without getting too inappropriate. The basic point is that even though curse words have exact translations, they have completely different contexts.

For example, the “f word” in Spanish is “joder.” But, it’s not nearly as strong of a word in Spanish, so I don’t feel out of line putting it in this blog. They definitely mean the same thing, but “joder” is more like “damn” in usage, which is a much more mild word in English. Also, the most offensive English curse word I can think of becomes a filler word in Spanish. I’m not even kidding. It means like…”wow.” Which is a pretty striking difference! Part of this is that Spaniards curse more, I think. (Seriously, I lived in the US (in New Jersey, no less!) for 21 years and Spain for a month and a half, but I think it might know more Spanish insults than English ones.) But also the words just have different cultural significances, because there are Spanish curses which are stronger than their English counterparts…but now I’m really getting into territory where I can’t continue without insulting someone, so let’s move on.

One last language note: Spanish has 2 useful expressions: “me gusta” and “me cae bien,” which mean almost the same thing.

So, first of all, cuidado! (Be careful!) Because “me gusta” is definitely the only one of those I ever learned in school- you use it for everything. I like the beach, I like apples, I like to read, blah blah blah. BUT you can see how easily you can get into trouble if you don’t know the connotation it takes on when used with people!

And second of all, how AWESOME is that! So useful! I really wish English allowed you to make that distinction without sounding like you were in the 3rd grade, you know?

Here are some other, non-linguistic observations about Spain:

1. Man, people in this country sure love their shoes. I think the number of shoe stores in this city rivals the number of grocery stores. I really not exaggerating.
2. I love that you can go to the grocery store and buy olive oil by the gallon. In fact, it’s hard to buy it in anything smaller than a gallon.
3. Age is perceived different here. I am much younger in Spain that I am in the US. It was a little annoying at first (someone actually said to me: “You’re how old?! Oh my God, you’re a baby!” …exact words) but I’m kinda starting to like it. Maybe it means I don’t have to grow up yet.
4. They don’t do sarcasm! Oh my God it’s awful! How will I ever survive?! Seriously, humor here is very differet. During my first week or two, I went out with a bunch of friends and made a sarcastic remark. I was met with a moment of silence, followed by one guy saying, “Oh! She’s being sarcastic, that’s funny!” and in that moment, I KNEW I was in trouble. Spanish sense of humor is very cheesy, I’m sorry to report.
For example: I lost a lot of weight recently, so much so that a lot of my clothing doesn’t fit me anymore. To get this joke, you have to understand the verb “quedar.” It’s one of those words that means like a million things, but you only need to know two of those meanings: primarily, it means “stay.” “Voy a quedar aquí” = “I’m going to stay here.” But, it can also mean “fit,” as in “my clothing doesn’t fit me” = “mi ropa no me queda”
So, the following exchange occurred between myself and a coworker.
Me: “My clothing doesn’t fit(stay) me!”
My friend: “Is it running away from you? Hahaha!”
Basically, it’s the Spanish equivalent of “is your refrigerator running?” and my coworker actually thought it was hilarious.

Still on the sarcasm theme, the most frustrating thing ever happened today. I didn’t have a great day, was sort of in a lousy mood, and my friend and I got into something of a fight.
Me: “You know what, I’m sorry I’m not having a good day, maybe you should just go talk to someone else.”
Spaniard who doesn’t ever hear sarcasm, ever: *confused look* “Are you being sarcastic?”

Aarrrgghhh! Please, for a moment, just imagine this. You are really frustrated, fighting with someone, and just want them to leave you alone. So you say, “I’m sorry my bad day is bothering you, just leave me alone.” And then you have to EXPLAIN what that means to them. I don’t think words can adequately express the frustration I felt in that moment. Ha!

I leave you with some random photos of Madrid. Enjoy. 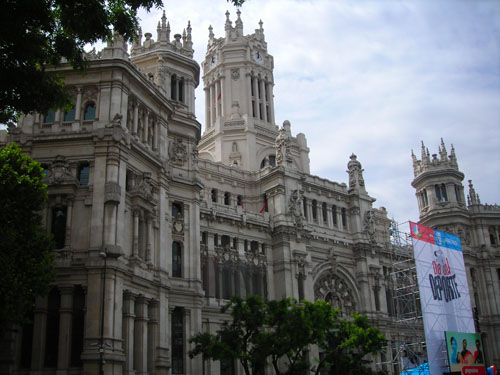 Okay, do you see this building in this picture? This huge, enormous, palace? That’s the post office. I’m not even kidding. It’s even officially called “El Palacio de Comunicaciones.” That’s right, the Communications Palace. I think it’s the most absurd thing about this city. I went in there once and almost got lost. I had to go to the information desk. (Just let that sink in for a minute…the post office has an information desk.) And I asked the woman, “Um…I just wanna buy some stamps?” And do you know what she told me? “Go to window thirty one.” Thirty one! If window thirty one is for stamps, what exactly are windows one through thirty for?!?! 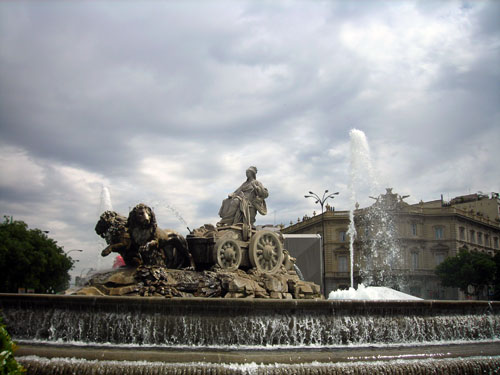 This is Cibeles, it’s a famous statue right in front of the “Communications Palace.” The thing about Madrid, is that there’s not much to do in terms of sightseeing. If you read any travel guide info about Madrid and look at the top ten things to do, it will include coming to take a picture of this statue. And I mean, it’s kind of a cool statue but…really? Anyway, this is the “Plaza de Cibeles,” where all the hard core partying happened after Spain won the Eurocup. 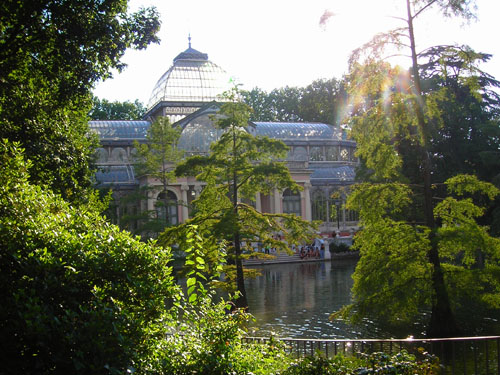 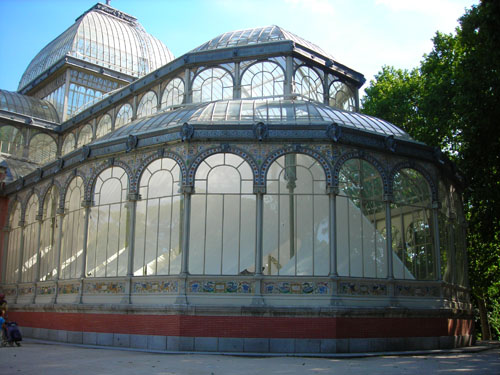 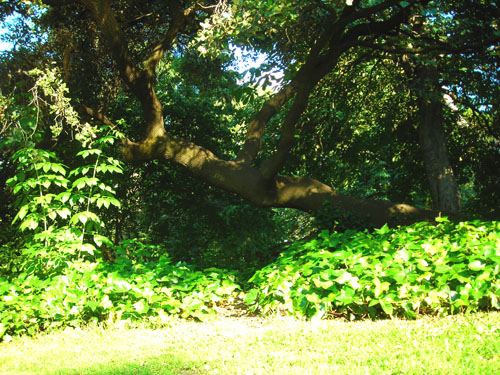 I absolutely love Retiro park, it’s so beautiful and peaceful. Right after taking the above pictures I settled into the grass to read for awhile. When I noticed this tree. Okay, this tree just waiting for you to climb it, isn’t it? So that’s what I did after taking this photo. =) 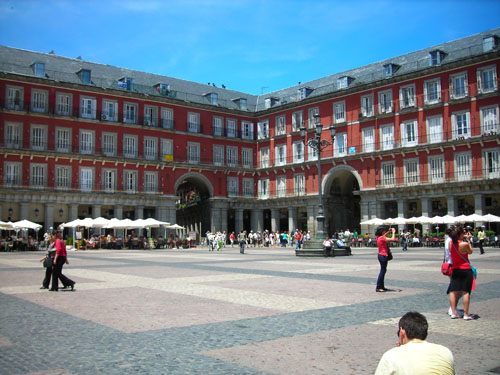 La Plaza Mayor. Another one of those overrated “Top Ten Things to do in Madrid.” You go there so you can say you’ve been there, basically. Apparently this is where super important things used to happen back in the day, like the crowning of a new king and such. By the way, my commentary on overrated sightseeing is not at all meant as a bad thing- it’s just that Madrid is a city to be experienced more than seen. You come here to go out for tapas and stuff, not to see pretty things. So the sightseeing lists really have to stretch it… 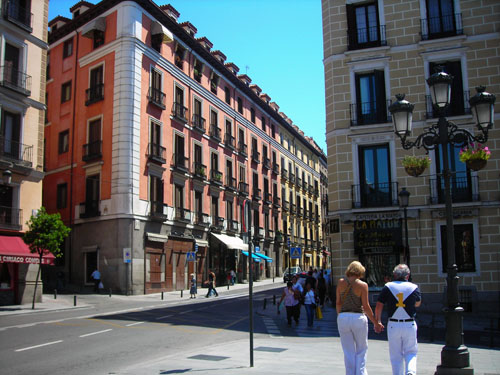 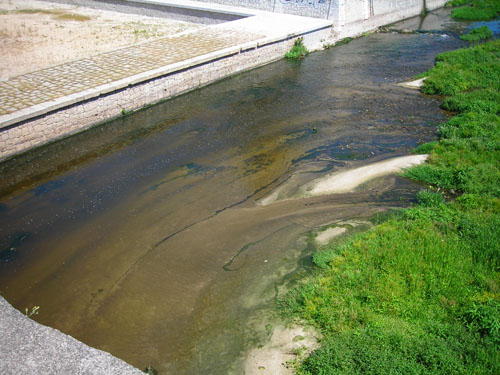 El Río Manzanares. Madrid is home to what is probably the world’s lamest river. Seriously, it’s a creek. 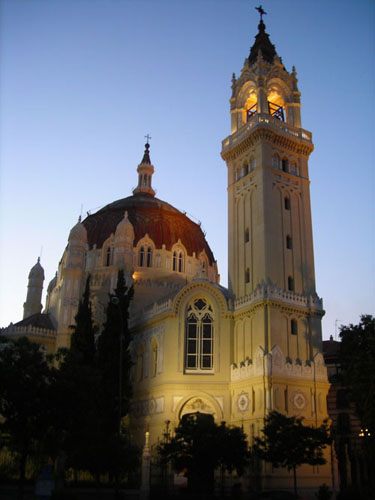 I have no idea what this building is. But I noticed it when I was walking home at dusk one day. And it was pretty, so I took a picture. 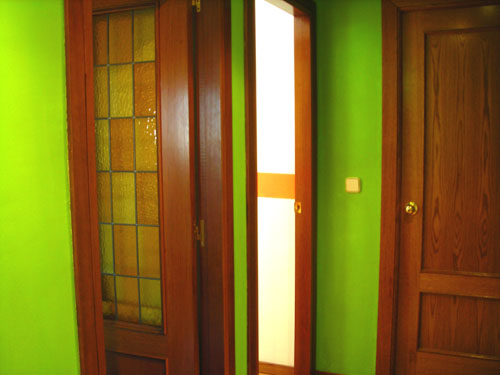 Speaking of pretty, check out the colors in my hallway. 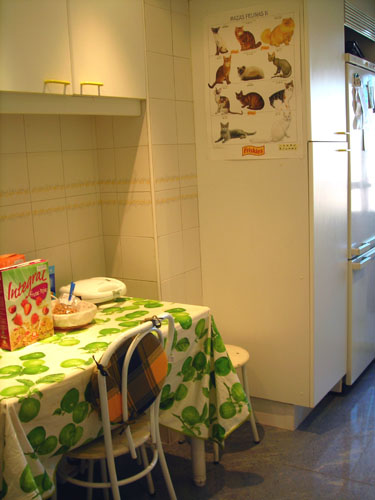 Where I eat breakfast every morning. 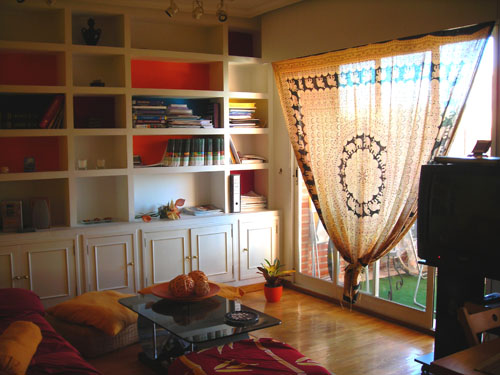 The living room in my apartment. Check out that bookcase. I am all about the bright colors lately. Isn’t this place awesome?

Congratulations, you have just been taken on a virtual tour of like, 5 of the top 10 things to see in Madrid, plus my house. So if you ever visit, skip the photojournalism tour, and just go out for a drink instead. ;-)