My name appeared in The Tech; now I am immortal.

So there’s this list of 101 things to do before you graduate from MIT; I don’t actually have it and I can’t find it online, but if memory serves me correctly, the things you’re supposed to do are along the lines of, “Go to Garment District,” “go to a BSO concert,” “pull an all-nighter,” so I’m figure pretty well on my way there. Of course, I think one of them is “earn 8 PE points” and I should really get on that because I think it’ll end up being a little more important than making yet another excursion to Garment District. Well, anyway, I remember that one is “get published in The Tech,” and that’s one that I just never thought would happen, but hey, hey look at this: 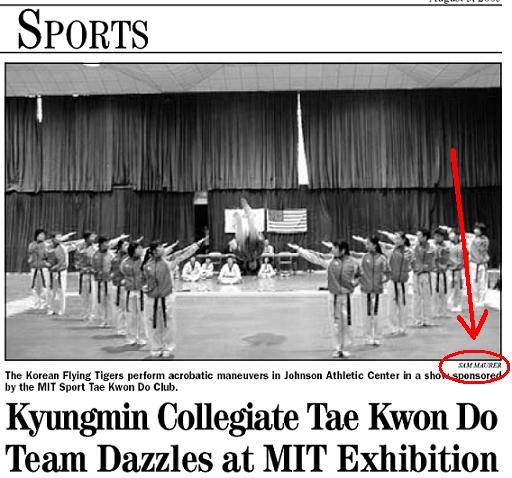 Booya. As most of you know, I’m a fantastic athlete and dedicated sports enthusiast, so it should come as no surprise to any of you that my first (and likely only) appearance in our school newspaper is in the sports section. And hey, you saw it here first, faithful readers.

Actually, I think the task is to “have a letter to the editor published in The Tech,” but, uh… close enough. And, sure, maybe it helped my chances that I live within 20 feet of the news, sports, and opinion editors.

1. I think I accidentally ordered a large pizza from Bertucci’s while running today. Sorry guys, I thought I had cancelled it.

2. Sometimes I start using a word ironically (usually to imitate somebody else who uses it a lot) and then I forget that I’m supposed to be ironic with it, so I accidentally incorporate it into my everyday vocabulary and then people start wondering why I talk so strangely. Examples: “yo” “yoyo” “dude” “man” “awesome” “hot” “nice” and now I’m worried about “booya” above.

3. According to this article, researchers at another prominent institute of technology found an extremely distant object larger than Pluto that seems to be orbiting the sun. NASA is currently debating whether or not it should be considered a planet. They are tentatively naming it “Xena.” That’s so cool. But I bet MIT would have come up with an even cooler name.

4. You might think Xena is a funny name for a planet, but in the course of one hour in 7.06: Cell Biology we discussed elements of a signaling pathway that are called “frizzled” and “Sonic the Hedgehog.” Biologists are nuts, I tell you. Sorry Mollie.

5. Through Megan ’08, I now have an mp3 of the Flaming Lips‘ cover of “Bohemian Rhapsody” and the Yeah Yeah Yeahs’ remix of Kelly Clarkson’s “Since U Been Gone” and both are excellent.

6. One day when nothing happens to me I’m going to do an entry about baby names and it’ll be pretty scary. Watch out!

7. Ruth and I have painted for about 12 hours each over the past three nights. Tomorrow you shall see the fruits of our labors. The fruit of my labor is mango, specifically.

8. I’m not making promises anymore about the vegetarian entry, but basically, most of the reason I tried being a vegetarian for a month was so I could write about it on my blog. So, you’re definitely going to get an entry on it in the near future.

9. I mentioned the BSO above; MIT pays for your college card, so you can get pretty good tickets to most BSO concerts for free as an MIT student.

10. Today, 8/11/05, I went to a PhD thesis defense and, without knowing it, sat and ate an egg bagel three feet away from the former director of the CIA.

2 responses to “Dig if you will a picture.”