a la Humans of New York

This is the first in a series of a couple of posts I wanted to do on art in my dorm, East Campus. According to the MIT Mind and Hand Book, MIT allows three undergraduate dorms (Random Hall, East Campus, and Burton Conner – rip Senior House) to paint murals on the dormitory walls. All three of these dorms have spectacular murals, but I wanted to talk about my own dorm – and as you might have guessed from the title, I want to focus on the door murals in particular for this post.

When you first move in, one of the first steps in making East Campus your home is painting your door – at least, that was my experience, but I’m sure a lot of people can testify to that. East Campus culture is very heavy on individuality and how you choose to represent yourself, and your door is perhaps the most tangible example of this.

One of the first things my roommate and I did together was paint our door. When we moved in, the door was painted a really ugly yellow and covered in some weird foam, so we sanded it off and it took literally forever. My roommate (Anto M. ‘21) happens to be a very talented artist, so she created this cute design and stayed up till 5 AM one night painting it. I am a very untalented artist, so I contributed by painting the solid parts. Our final touch was to splatter paint it so that it looked like a starry sky. Here’s a before-after picture – I think we did a pretty good job! 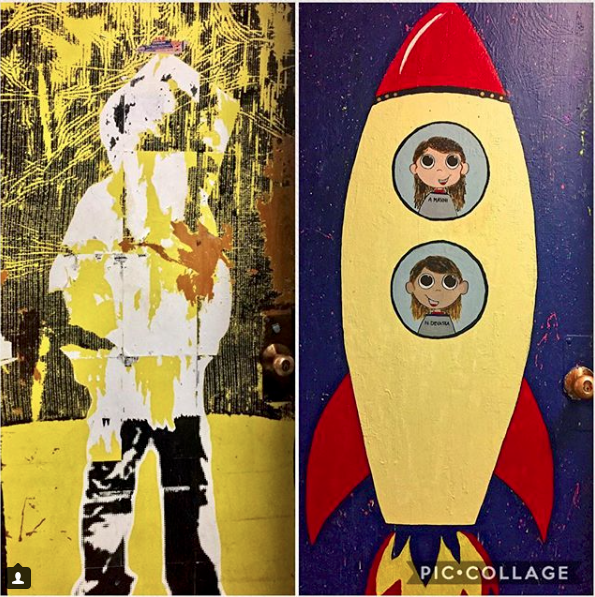 That’s the story behind my door, but it’s certainly not the only one with a great story. So I sent a Google Form out to the residents, and here are the responses! (a la Humans of New York, credit to Yuliya for the idea and inspiration)

“Door murals are a bit more personal than the other murals on hall since they kind of represent your home and, at least for me, they paint a mental image of the way I view my life inside my room. Even if they’re silly and may not have much ‘deeper meaning’, it is still a way to express your personality in whatever form you choose to.” – Erik P. ‘21 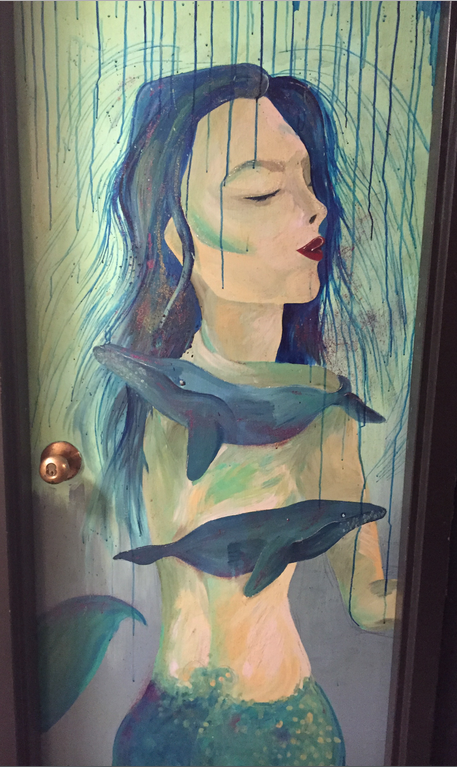 “I painted this last year, when I moved onto 41W as part of a small group of Senior Haus expats. It is based on a photo of the Tavannes tunnel (used by the French army during WWI) that was the book cover to “The Consumer” by M. Gira. This helped make it feel like the entrance to the cave I crawled back into every night.” – Marie de A. ‘18 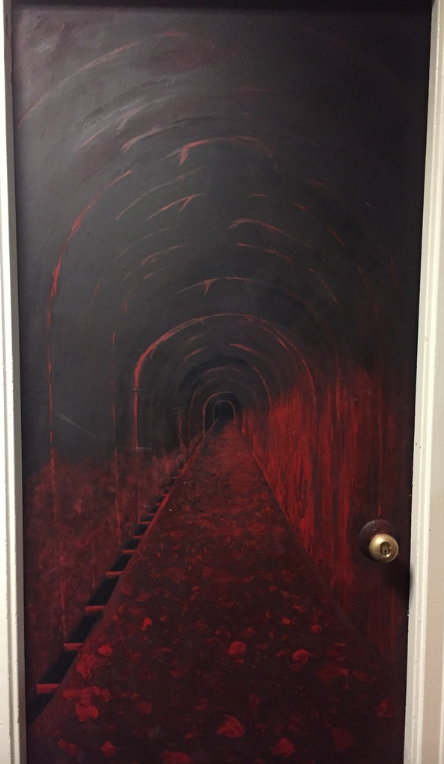 (not pictured, but the top of the doorframe reads “Avalanche, veux-tu m’emporter dans ta chute?”, which is a line from Charles Baudelaire’s poem Le Goût du néant (The Taste for Nothingness) that roughly translates to, “O avalanche, won’t you come down and carry me away?” 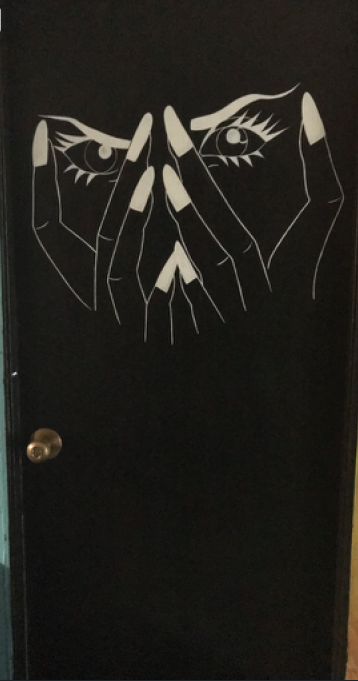 “It seemed to me like every Coloradoan had a flag to hang up in their dorm room, but I didn’t have the forethought to bring one with me to MIT. Instead, I found some paint in the lounge and painted that flag on my door, as it will be for eternity, or at least until the next resident paints over it again. I just like the idea of that beautiful but slightly obnoxious flag being on that door, somewhere between the layers of paint, a permanent memory of the greatest state in this fair country.” – Sarah W. ‘21 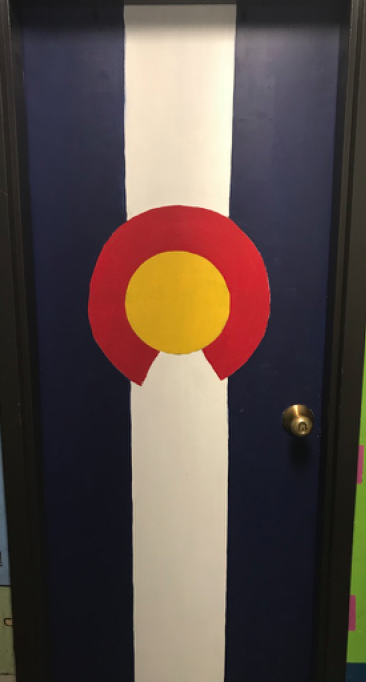 “This is what a typical door in East Campus looks like, just in case you can’t tell.” – Tabrez A. ‘19 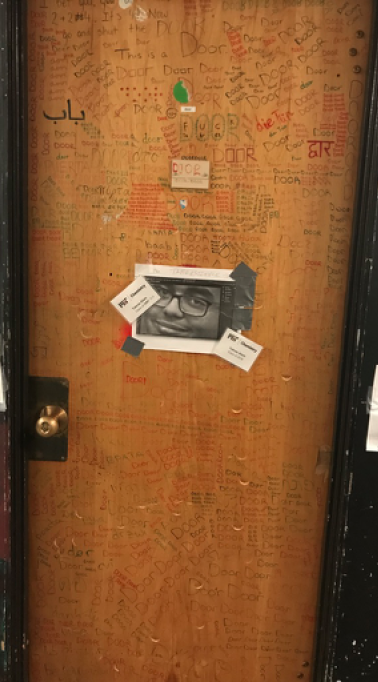 “When I moved into my room my freshman year, the door had a really well-drawn mural of The Lion King. I didn’t really like it because I wasn’t a huge Disney person, but it was so well done that I was too afraid to paint over it with something that might not look as good. After living in that room for four years, I finally worked up the nerve my senior year to paint it over with one of my favourite album covers, and luckily it turned out all right.” – Henry S. ‘18 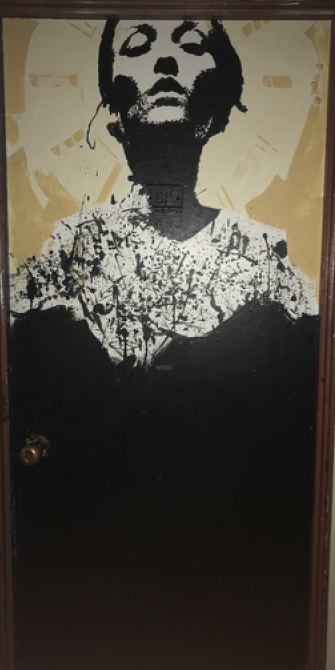 “I love my door!! It has existed at least 7 years but I no longer remember when it was painted if I ever knew. It’s a nice simple palette with pretty crisp lines and I was very happy to have it as my door for 3 years.” – Anonymous ‘18 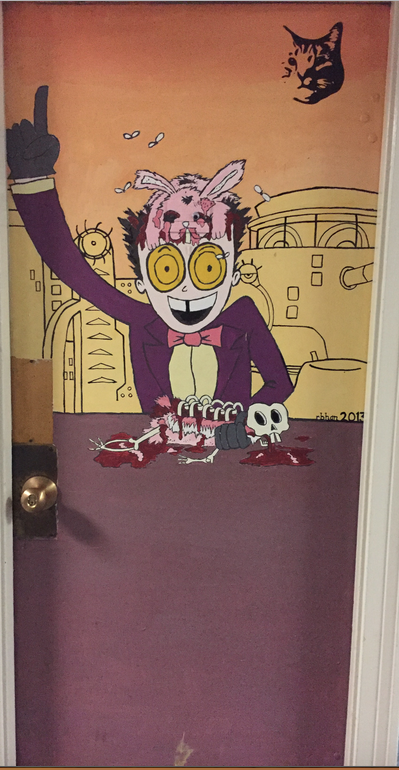 “I fell in love with my door’s mural when I first moved into my room. It was painted by a previous resident, then wallpapered over, and has been banged up a lot over time; I’ve been trying to remove the wallpaper and restore the mural to its full sea-turtle-y glory. In my, uh, copious spare time.” – Shiloh C. ‘20 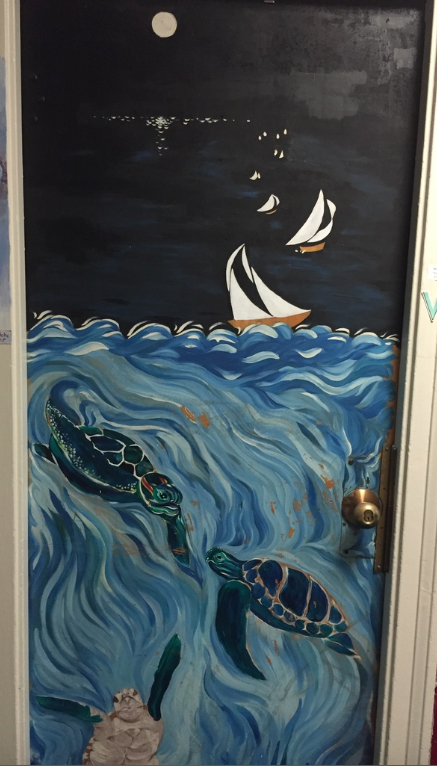 “[redacted] stayed up for 7 hrs to make a cardboard cutout and hung it from my bed in the dark and i almost screamed. then i tried to one up her so i owned it and made it my door. then she like destroyed me and emailed [email protected] and asked people to join her in a peanut butter baby prank with real peanut butter. [redacted] was allergic and wanted to join. switched to sun nut butter. they inflated a pool and slathered 6 people in sun nut butter and got in the pool and waited for me to come back to my room. i cried the end” – Nada H. ’20 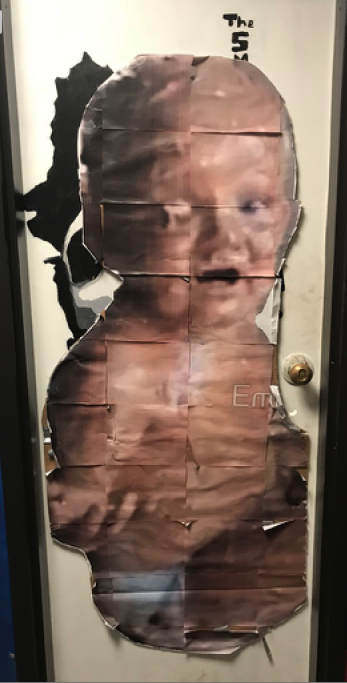 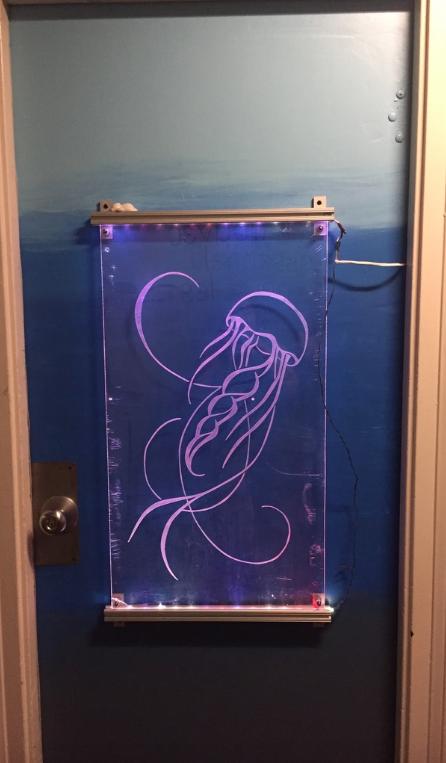 “Less about my door, more about the hubcaps.

My freshman year, my friend from Caltech was taking a year off to work in Cambridge. His roommate had just gotten a girlfriend, and a handful of people were in a hallclot commenting that we felt like “a third wheel.” He turned to another friend and said “you’re not a third wheel; you’re your own vehicle. A good, solid, dependable jeep.”

I asked what I was, and his answer was “Maya, you’re a hubcap. You roll down the hill narrowly missing traffic, and we’re all just like, ‘it’s gonna fall, it’s totally gonna…nope. It’s still upright. Well, that’s impressive.'”

I started collecting hubcaps after that.

He left for Caltech after that year. I missed him, and apparently spent most of my time talking about him.

That Valentine’s day, I came back from classes exhausted (I was taking ~6.5 classes, in class 9-5, and spent until 10 in office hours), and found rose-petals leading to my room. Several people had gotten into my room and created a shrine to him, including hanging a 4’x4’ poster of him, and bringing in a hubcap with a heart on it, a teddy bear (I love stuffed animals), candles, and a fake diary from me confessing my love. It was one of the best things I’ve ever had someone do for me.

When a bunch of moles (Caltech people from Blacker House) came to mystery hunt, I gave them one of my hubcaps with “urs 5ever” written on it, and he hung it in his room.” – Maya K. ‘19 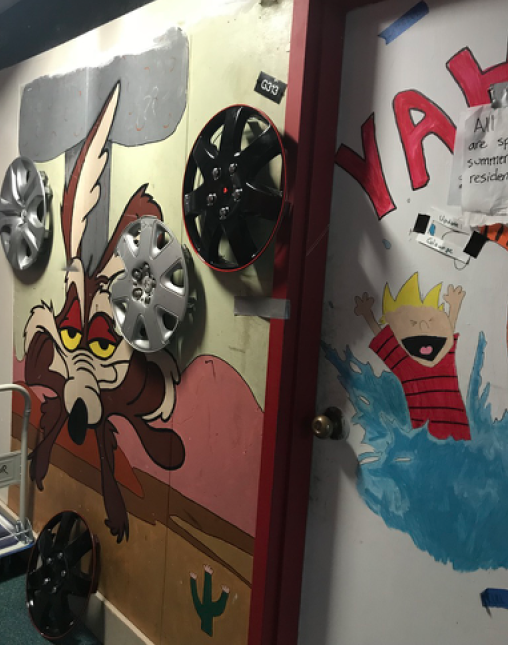 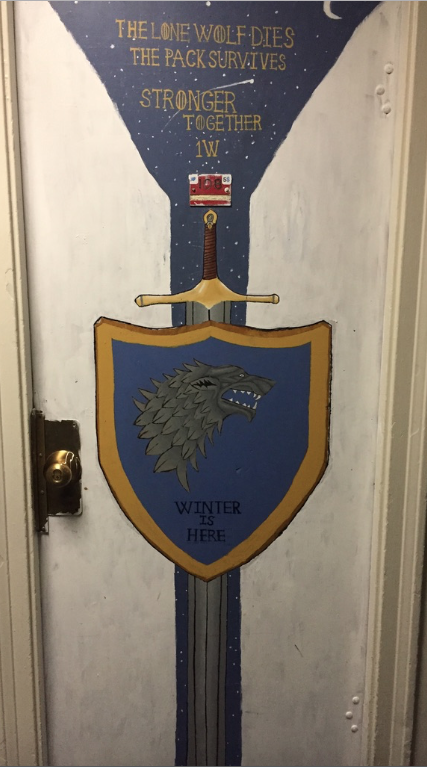 “The eyes are gold leaf. That’s all.” – Anonymous 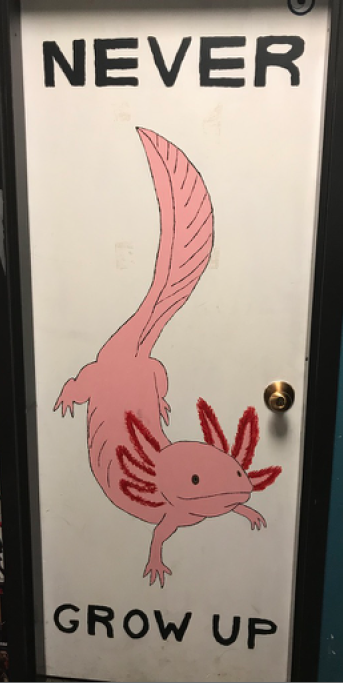 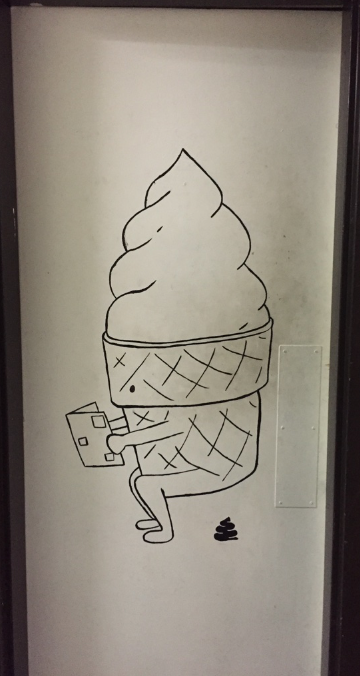