So. I know a lot of you reading this are Americans, which means that the word “football” means a sport played neither with feet nor anything resembling a normally shaped ball. But, to the rest of the world, football is what we call soccer. And to Europe, it’s been the focus of everyone’s attention lately.

Why? Because this summer, the EuroCup was played (which only happens every 4 years). Only one country emerged victorious.

And which country was that? =D

Spain hadn’t even made it past the Eurocup’s qualifying rounds in something like 20 years, so people around here were pretty excited even to make it to the quarter finals. I watched all but one of the games- either in bars with friends or in La Plaza de Colón, where they put up huge TV screens so that thousands of people could watch the games at once. On the day of the final, I made plans with my friend Martin to meet him and his family to watch the game. On my way to meet them, I passed through Colón to see how excited everyone was.

Here’s a view from behind of the giant screens: 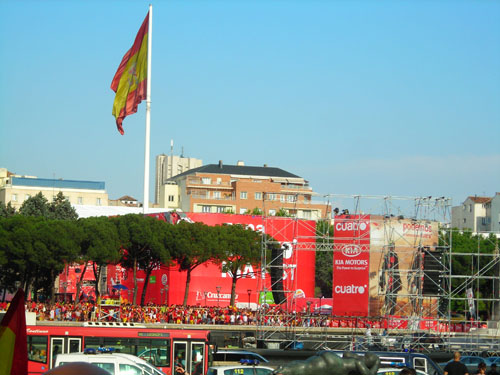 ….and the thousands of people getting psyched 2 hours BEFORE the game: 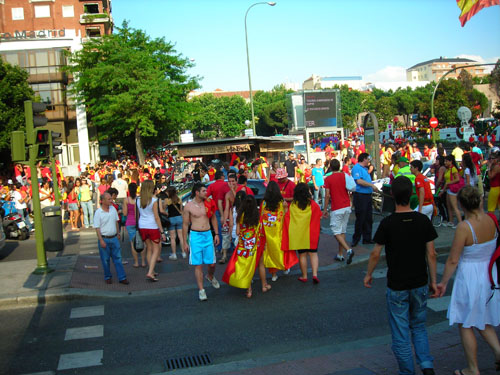 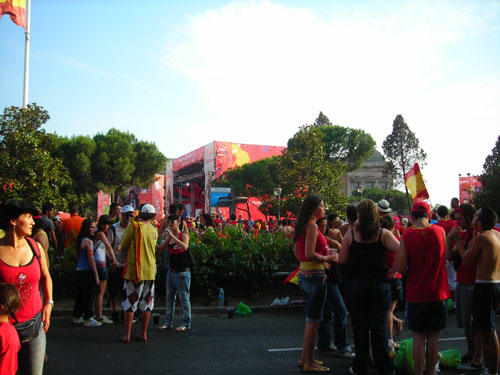 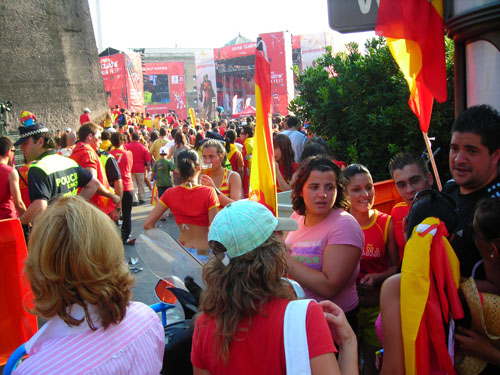 I even took some video of the pregame celebrations for your enjoyment.

I met up with my friend Martin and we watched the game in a bar/restaurant place. Our waitress served our taps while singing Spanish football songs.

After Spain won (seriously, the actual game is so not the point here, it’s all about the partying afterwards…) Martin and his family headed home, because they live out in the suburbs and actually have to take an hour bus ride away from the city. I got on the metro, but didn’t take it all the way home. That would be silly. There was so much partying going on!

I got out at Velazquéz, two stops away from Colón, where I knew there would be thousands of people starting to make their way to Plaza de la Cibeles, where the real party would happen. (Don’t ask me how I know these things, okay, I’m just trying to integrate myself into a culture here…ahem…) When I got out of the metro I was a little disoriented at first, because I’d never gotten out at that stop before.

But, being the smart MIT student that I am, I thought, well look, the street is absolutely FULL of people all walking in the same direction. Obviously they are leaving the game, so I just need to walk in the opposite direction to get to Colón, which is the way I need to go to get home from here anyway.

So I pulled out my camera again and started taking some video of the reveling that was going on. After a block or so I paused. I was pretty sure that I should have made it to Colón by then. Besides, there are these 2 huge towers in the plaza that should be visible from a few blocks away, and they didn’t seem to be ahead of me.

And *then* it dawned on me. How STUPID I’d been. These thousands of people flocking through the streets of Madrid were obviously pouring out of their homes and local bars to go TO the huge party in Colón and Cibeles (nevermind that it was 11 PM on a Sunday). Duh!

So, I turned around and started walking with the huge crowd of red and yellow. Colón was much more desserted than I expected (ha), since I had wasted so much time walking in the wrong direction, most of the people had made their way to Cibeles.

And THAT was were the party was. It was basically just like when Boston won the World Series only like a HUNDRED TIMES BIGGER. Absolutely insanity. Thousands and thousands of people, wearing Spanish flags, their faces and bodies painted red and yellow, blasting noisemakers, screaming, singing, chanting, using their flags to “bullfight” with oncoming traffic (I found this absolutely hilarious)….The roads weren’t even officially closed (except in Cibeles), but everyone just walked in the street anyway. And no one cared, because the traffic was part of the celebration too- passengers waved flags out of the windows and drivers honked their horns in time with the thousands of people chanting.

Here’s another video for your enjoyment- there are 8 clips compiled together. According to Google maps, you are about to enjoy a 2.2 km tour of the party through Madrid’s main roads. (Dots on the map indicate roughly where the video was taken. The clip from Calle de Alcalá is actually looking back at Cibeles, so you can see just how many people where there. It’s incredible.) 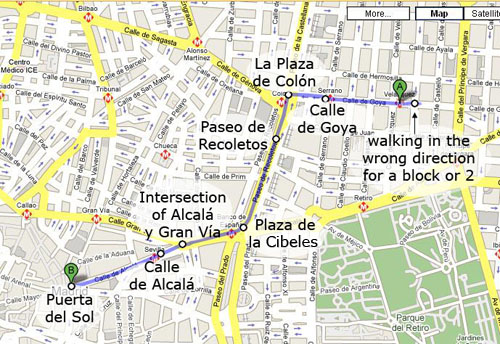 Keep in mind this is all after 11 PM on a Sunday!

I got back to my apartment around 1 AM and logged on Skype.

The next morning, the office was desserted. Of the ten people who sit nearest me, at least 5 never showed up. The ones who were there were blissfully happy, smiling all day for no real reason, despite their hangovers.

I picked a good summer to live in Madrid. =)