Every square is a rectangle by Sam M. '07

A brief look at every student activity at MIT.

Okay, first off, I have to tell you that Erica ’07 is a superhero. For the past month or so, she’s worked about 50 hours of UROP every week in an organometallic chemistry lab, and then on top of that, she’s been working as Burton-Conner’s summer desk captain. Unlike being a deskworker in a dorm, the position of desk captain requires actual work, with the payoff being that you get free summer housing plus a stipend in exchange for at least 40 hours of desk service every week. Also, she’s been working all these 90 hour weeks with a violent illness. Seriously, it sounds like she’s going to cough up a kidney or something every time I see her. And then on Wednesday night, she stayed up with the rooming committee until 4 AM or something making sure that all our freshmen had their rooms readjusted properly after in-house rush.

Anyway, tonight I decided to take a few hours of desk service to lighten Erica’s load. During the term, working desk is a great opportunity for me to make a little extra money while working on my problem sets in a relatively stress-free environment. Seriously, the only things I have to do are retrieving packages, dispensing spare keys to lost students, and pressing the “door unlock” button every time somebody rings the intercom to get in the main entrance. The last one is really annoying, so I make people who ring the intercom show photo ID and sign a special book. I guess it’s kind of a security measure too.

Tonight I didn’t have any “p-sets” (MIT slang for “problem sets”) to “tool” (MIT slang for “work fastidiously”) on, so I played this game for three hours. While doing that, I got paid $27.75. Mitra can explain why this is wrong from an economic perspective.

Then I decided to be productive and write a blog entry.

I was totally serious when I wrote that last sentence.

Yesterday, a bunch of us went over to the activities midway to check out Alicia ’06 performing in the MIT Sport Taekwondo Club demonstration. In the past, I’ve gotten an MIT EMS laundry bag and a neat slinky advertising the Baptist Student Fellowship or something. Literally every organization on campus, from Model UN to the Outing Club to MITBeef, has some. Look out upon this sea of tables: 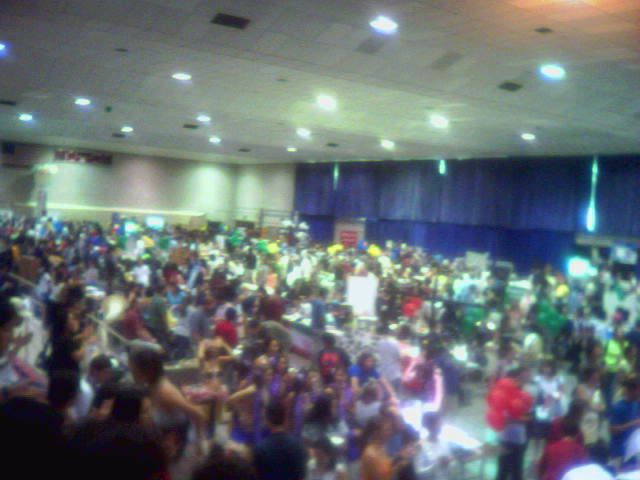 Every one of them has something free for you with their logo on it. Still, I’ve reached a point where I feel too old to be randomly grabbing free stuff from organizations with no intention of joining them–make sure to do this as much as you can freshman year, when you still have that as an excuse. So, I just settled into a seat in the bleachers, where we watched performances by Sport Taekwondo, Ballroom Dance, Bhangra, and TechSquares. The last one was particularly interesting–to the tune of Carlos Santana’s “Smooth,” the dancers were told to “swing their partners,” “promenade,” and “execute a linear wave.” I guess everything gets a little more technical when filtered through the lens of MIT, although supposedly this is the only collegiate square dance group in the nation, so I guess they can make up all the linear waves they want. I also decided that I will probably never square dance, even if you can get PE Credit for it. Still, my favorite performance was bhangra–everybody always looks so darn happy doing it! I felt giddy.

I didn’t get a picture of it with my camera phone because the resolution wasn’t good enough to see their smiling faces, which would probably ruin the whole image. So, I have a picture of the MIT Hawai’i Club doing a traditional dance. They didn’t look quite as happy, but you can’t really tell here: 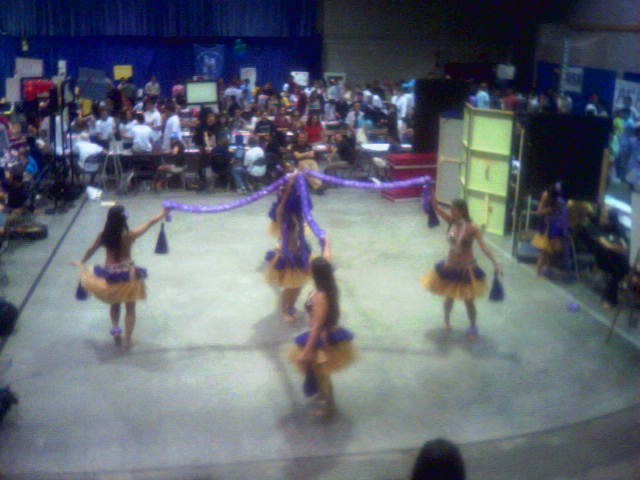 Also, Ruth ’07 pledged to join the MIT Marching Band with me next year. I know she said it as a joke, but now it has been blogged, so it is an Unbreakable Oath. Get ready for it next year.

DID YOU NOTICE? The introduction to this entry is longer than the entry itself?

6 responses to “Every square is a rectangle”