Pictures from the Conner 2 holiday party! Yes that was a month ago. Leave me alone.

I’m going to do things backwards today, and start with…

Responses to comments:
Daniel: Hey, the EMT class sounds cool! I had no idea how to pronounce that medical device you were describing, so I checked m-w.com. Just wanted to let you know, it seems to be spelled “sphygmomanometer”… no worries, I suppose this is a mouthfull (or a keyboard full??).
Hmm…that does sound about right. What I did was google search what I thought it might be and when I didn’t see a “did you mean…” message, I assumed it was spelled correctly. It’s the new spell checker! Haha. So funny story, once I read your comment I googled it again, and now that entry I wrote is the first hit for that (as you correctly point out) incorrect spelling of the word. That’s a rather dubious and embarassing distinction! So I fixed it. Thanks a bunch. Moral of the story: I can’t spell, but neither can google, so it’s ok.

Curtis: Though I actually have a few questions. How long does IAP last? And do you only get to do one activity during it?
IAP generally runs for the month of January, give or take a few days to account for the way Christmas, New Years, etc fall in any given year. There are TONS of things going on around campus, and you are free to participate in just about any of them. There are for-credit classes, non-credit classes, and lots and lots of random activites like Mystery Hunt and Charm School. There is a 12-credit limit during IAP (which obviously only applies to for-credit subjects) and a few other restrictions. For example, some classes have limited enrollment and are chosen by lottery, some require advanced sign-up, and some have a materials fee associated with them. Other than that, you are free to pack your schedule with as much as you want. As for me, the EMT class takes 8 hours a day, which eats up most of my time. But there are plenty of things going on at night and on weekends that I would be able to attend. Plus, not all activities are classes. There are enough one-time events, seminars, lectures and activities to keep you busy for life.

I am now officially caught up. =)

I got back from class today and sat down and finally sorted through about a week’s backup of emails and comments. My room is still pretty much a mess and I haven’t folded all my laundry, but I’m making a dent in that to do list! So if you’ve emailed me any time since the new year, go check your inbox. =)

EMT class today was pretty awesome, but I think I’ll hold off description until next week. As cool as it is, I’m more than glad we have Fridays off. It’s been a pretty long week as it is. I’ve already done 32 hours of training. The MIT firehose analogy at its finest. The point is made even more clear given the fact that I plan to rest up tonight so I can dedicate as many hours as I possibly can this weekend to the Mystery Hunt. Normally, I’d be all for staying up for 3 days straight and all, but I have class at 9 AM Monday, so sleep will be pretty necessary. I’ve found a team to join annd I’m definitely looking forward to it. Of course, I’ll be taking a break only a couple of short hours after the official kickoff to get instruction in driving the MIT ambulance. Oh, and I’m going to be running over to the shop to help out with FSAE whenever I can.

So that’s my mini update for today. I leave you with those pictures I promised. If I were you, I wouldn’t expect any posts for awhile, but who knows. Maybe I’ll squeeze in a real-time Mystery Hunt update. But I make no promises.

Now, without further ado and only about a month late, I give you…the Conner 2 Holiday Party: 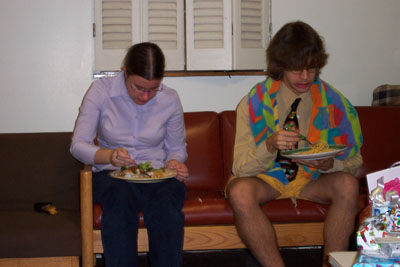 Adelaide and Sam enjoy dinner. What is Sam wearing? Damned if I know, but he claims that the towel around his shoulders was NOT inspired by the Hitchhiker’s Guide to the Galaxy, as I had assumed. 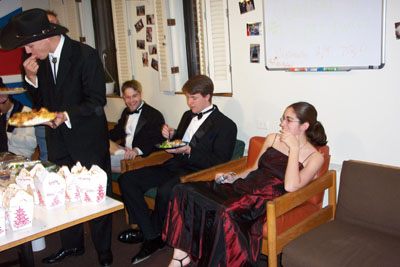 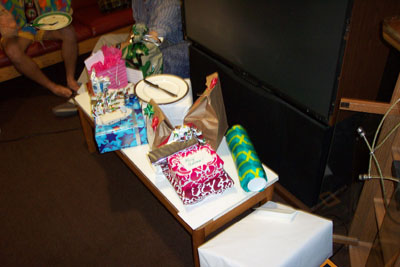 Secret Santa! Interestingly enough, they have no name tags. The Secret Santa is responsible for writing a poem describing who the gift is for. The poem is read aloud and everyone has to guess who they mean. Lots of fun to be had there, I promise.

Then we had a little fashion show: 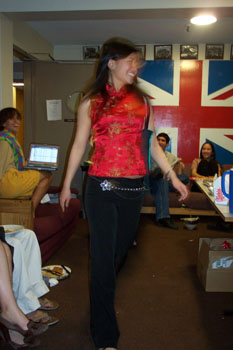 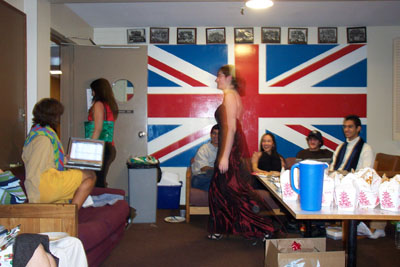 and Ruth entered as a team and won “most elegant.” Or something like that. Look at what they’re wearing. You get the idea.

A bunch of guys entered as well. There was… 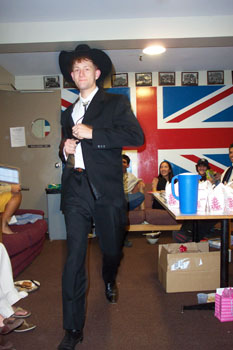 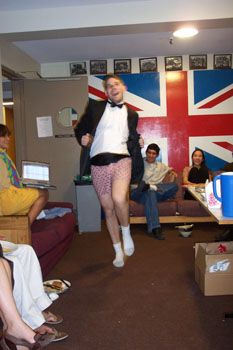 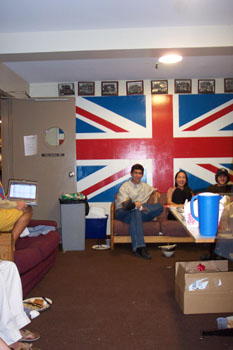 and Zach. Where is Zach? Well, I was all set up waiting to take pictures of everyone as they came in. But Zach ran through the room like such a complete maniac that I completely missed him altogether.

The tie between Matt and Chris was decided by a dance-off: 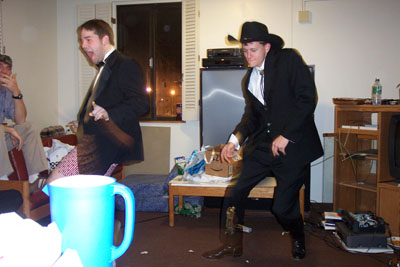 …and Chris was declared the winner! 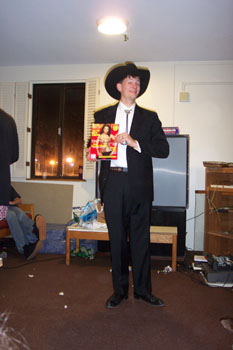 (Yes, his prize was an issue of Cosmo.)

And just one more picture from the blogger outing– we went out for ice cream and sat at a big table and had one large, messy conversation. Except this big old plant got right in the way and completely obscured Sam. Haha. =) 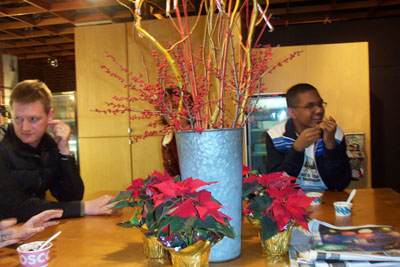