finding meaning at the end of the world by CJ Q. '23

i alone determine my destiny

i want to be a blogger to write for tenth grade me. i want to show him, the kid thousands of miles away, who doesnt know anyone who went to a big college, what its like here. i want to convince him to apply. i want to comfort him when he gets deferred. i want to tell him, hey! i struggle, and have existential crises every other week too!

well, i’m having yet another existential crisis and it seems i have been blogging about these more and more frequently. all in a week’s work, right? to wail and complain about how directionless and senseless and purposeless my life feels, like growing numb about the very fact that i’m becoming numb.

two. i spent my entire weekend, this weekend, working on a puzzlehunt, from 6 pm on friday to midnight on sunday. i didn’t do anything else, other than staff office hours for the class i’m a lab assistant for. it was more time than i expected to spend on the hunt; indeed, if we were a little more competent with the puzzles, maybe we could’ve finished on sunday morning.

coming into the weekend, i knew i’d spend a lot of time on the hunt, and i was really prepared to spend my whole weekend on it. and yeah, i had an awesome time. i love puzzlehunts because i love puzzles, but more than that, it brings people together to floor pi: pizens, students who are friends of the floor, floor pi alumni. and it’s neat how i can say, oh, wait, nelson knows about theater! or, yannick likes doing logic puzzles! and it’s just another dimension in which i get to know people.

but that meant that all weekend i had to fight off that gnawing impulse to do work. i had three psets due after that weekend, none of which i had started at the time. i did manage to get them all done after the weekend, even if it meant grinding them out on monday and tuesday. and i knew, coming into the hunt, that i was going to grind them out after the weekend, and i knew, from past experience, that i’d probably have enough time. so rationally, there shouldn’t have been any reason to worry.

instead, it worries me more the fact that i worried in the first place. why was i so concerned about my psets, anyway, to the point that i was just worrying about them when i didn’t need to? when were there times that i wasn’t thinking about psets these past few months?

three. one of the things i’m supposed to value the most is independence. and by this i mean, doing the things i want to do, as opposed to doing things because i feel like i have an obligation to do them. there was a time in my life, which was maybe two or so years ago, when i listed the values i cared about the most, and independence was the top one.

after all, that’s why i started living alone, away from my parents. i wanted to take control of my life, to stop going to church if i didn’t want to, to stop pretending that i believed in god if i didn’t, to not have to lie to my parents every time i wanted to go to the movies or hang out with friends. so it’s independence in the sense of taking the reins on my own life.

this is a philosophy i think the magic the gathering card force of will really embodies. this is a counterspell, which means you can play it in response to an opponent’s spell to prevent them from doing it. but the different thing about force of will is, instead of paying mana, the normal currency used to cast cards, you can instead pay with your life.

the mage who uses force of will is using their literal life force to counter a spell. it ties in well with the flavor text of the card. i alone determine my destiny. force of will says, i’m the one calling the shots here, and i’m not letting you steer the battle elsewhere, even if it means paying with my life. 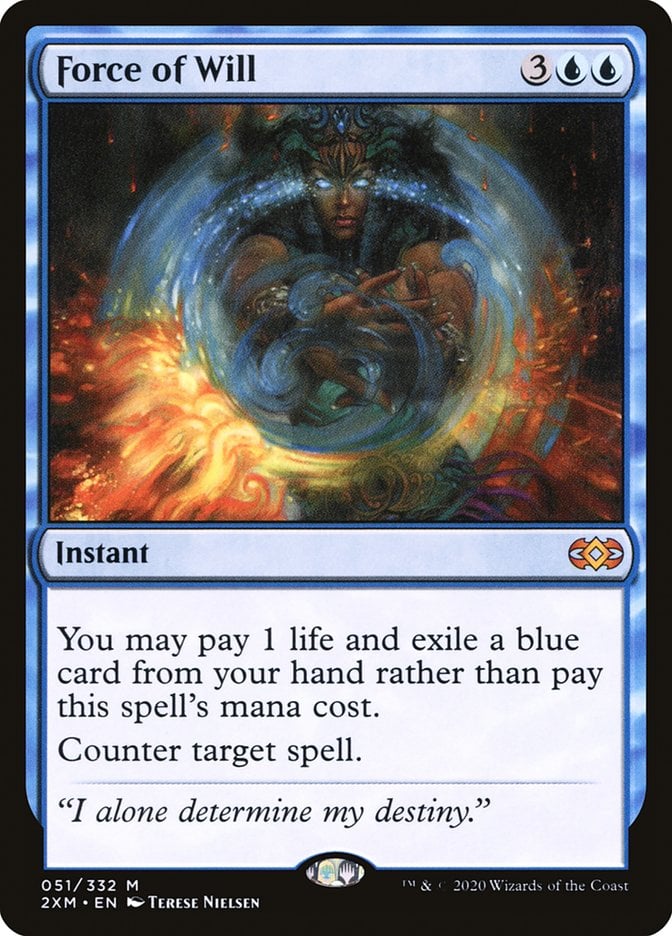 four. to be fair, maybe i did have a reason to be worried about not finishing my psets on time. last monday, i feel like i barely managed to get work done. somehow, it felt like i was chronically tired, as opposed to acutely tired. that afternoon, i found myself lying in bed, taking a half-nap, because i didn’t have enough energy to concentrate on finishing my pset.

and it wasn’t as if i was working on it all day. that morning i woke up a little past noon. i got lunch. i went to a class. then i went to a meeting. and only then did i start working on my pset. it felt like every time i opened my pset, i had an idea about how to solve it, but when i tried to write it up, i couldn’t manage writing a sentence before getting distracted. i kept wanting to do something else. i kept wanting to look at my discord or my twitter feed or ordinal markup, my latest diversion.

so in that classic college student woe, it was an issue of wanting to do work but not being able to. if i didn’t do work, i worried about it. but when i tried to do work, i avoided it. and yeah, sure, i said it myself, there’s no such thing as a typical day.

but why did i feel so tired, then? where did it come from? what is the reason? will i forever point my hands at the situation around me, tell myself that it’s the pandemic bringing me down, that these are all challenging times, that it’ll all get better when things are over? but will it really all get better, if i catch myself writing about the same things over and over again?

five. because like a cruel tragedy, i fall into the same problems over and over again. yeah, sure, i value independence! i alone determine my destiny, right?

yet only a year after running away from home did i find myself caught up in imaginary pressures about choosing where to go to college. only months after studying in mit did i find myself caught up in the rat race of wanting an internship without stopping to think about why. i told myself i’d care about academics less this semester, but is it happening? am i really caring less?

and as much as i wanted it to be, there weren’t any magic bullets that gave me a sudden burst of direction. not running away from home, not any college acceptance, not a pandemic. who’s to think that getting an internship or having everyone back on campus or graduating would give any more direction?

so much for caring about independence! so much for decrying the sellout! so much for considering my life meaningful and all the jazz, when it’s only when i stop, and think about it, do i catch myself. it’s only when i’m caught up in the middle of the problem do i see its magnitude. if i didn’t write those blog posts, would i have realized? who would’ve stopped me from spiraling down into something i don’t really want? and more worryingly, what’s preventing this from happening to me again in the future?

six. in the post days in lives that aren’t mine i sketch some imaginary scenarios of what this semester could’ve looked like if i chose a little differently. part of the reason i wrote this post was as a writing challenge, of sorts. i haven’t written fiction in years. and it’s interesting to tell a story about my current situation without directly talking about it.

to spell out the intent more clearly, i’m jealous. i’m jealous of some of my friends who do have these lives, because these are all based on lives of people i know. (well, except the third scenario, which sucks and is the only one that i wouldn’t choose over my current situation. so no, my world isn’t the worst out of all possible worlds, not by a long shot.)

i guess i’ve always had this problem of jealousy. i’m jealous of my friends who’ve gotten internships already, or are getting interviewed or whatever, when all i get are rejection emails one day after i send my application in. now, the current situation has made this more pronounced, and i feel jealous of my friends who are having a fulfilling time living with their great friends.

yeah, sure, i know their lives aren’t all stars and rainbows. and yes, i’m selfish pondscum for being jealous, when millions of people would trade their lives with mine in a heartbeat. such is the curse of the hedonic treadmill, of that ever upward-pointing hunger, of never being satisfied. always wondering what it’d be like if things had gone a little differently.

seven. why do i keep continuing? why bother? what’s the point? after all, it’s not an existential crisis unless you’re going to ponder the meaning of everything. what better time to panic over your life trajectory than after seven months of locking yourself in?

the things that are keeping me alive right now aren’t any big, grand schemes of meaning. no ultimate purpose like changing the world or giving back to my community or doing the most good. no huge ambitions, not when the room i’ve lived in has suffocated all the ambition out of me. no big goals, not after achieving the goal of making it through high school alive, making it through my gap year alive, and making it through the college admissions process and getting into my first choices. everything’s turned out perfectly, so what more do i have to ask for in life?

sure, i want to look ahead to graduating and getting a job or whatever. but is that’s what keeping me marching forward? no! these goals are so far ahead of me that they feel like shots at the moon! none of this ambition existed in the first place!

it’s shortsighted, but what else am i going to hope for, if everything around me is falling apart? the apocalypse could happen next week and i wouldn’t be surprised. when the world itself has lost the plot driving its history, i’ve got no choice but to let go of the plot myself.

eight. do i contradict myself? very well—

at once, i feel that i, alone, determine my destiny, for having taking the reins on my life and fighting my way to get here. yet i also feel that i am powerless to the situation i’m currently in, that getting rejected from internships or having a lack of motivation isn’t because i’m doing anything wrong.

at once, i feel numb to having these problems, yet i’m screaming in front of the whole world about how i’m worried i’m growing numb.

do i know what’ll happen tomorrow?

do i know where i’m going?

all the more reason to avert my eyes from the meaninglessness of my existence. if i make a mistake, if i mess up, if there ends up being a parallel universe that i’m happier in, if i end up in the worst of the billion billion possible futures i could end up in—so what?

why should i care?

at once, i am the universe. at once, i am flecks of energy, zeroes and ones, a million words, crisp night skies, and all the stars in the heavens.

and if the world ends next week, ashkjghasgauosghasugas;gashgk, who knows.