Hold on, this is a long one. Tons of pictures though!

Sunday wasn’t productive. Seriously, you try working when you know that in less than 24 hours you’ll be in New York and playing with toys. Maddie and I planned on leaving for South Station at about 11:45 PM so at about 10:30 we started getting ready. That meant slacks, collared shirt, and tie for me while Maddie just packed clothes to put on later. I brought nice shoes but there was no way I was going to wear them all day, so I wore my tennis shoes and a baseball hat for the trip.

We hopped on the two o’clock bus and settled in for the ride. The Chinatown bus has caught on fire and flipped over a couple of times but we didn’t have any issues. It was hard to sleep on (bumpy) but we got some naps in.

When the bus stopped it was 6 AM and nothing was in English. I took this to mean that either we’d found a wormhole and ended up on the other side of the planet or that we were in New York City ready for a day of awesome. We walked up Bowery Street until we could read the signs on the buildings and settled down in Starbucks to do some PSETing. That worked, um, kinda well, but eventually I got anxious and wanted to go explore. We went to Times Square and shopped around in the M&M store, tried to visit the Toys ‘R’ Us (closed), and then headed to the Javits Center for TOY FAIR 2008! We contacted Jonathan and he, along with Kevin (the guy who spoke to us at Hasbro) met us out front with our official letters and an American Express. Moment of truth, time to see if we were actually going to be attending Toy Fair.

Can you see the Mr. Potato Head watermark in the lower right? 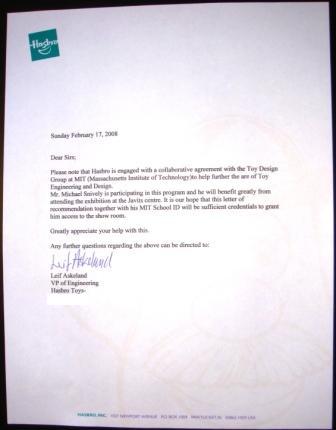 That’s Mr. Michael Snively to you! 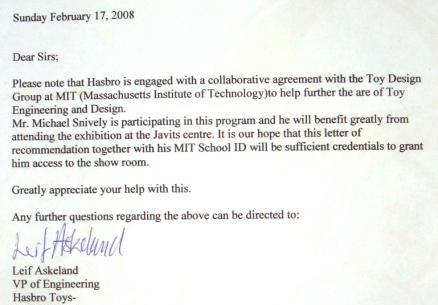 We walked up to the registration desk with our forms filled out, our letters, our MIT IDs, and state IDs. We push everything up towards the lady and got this really strange, incredulous look in return.

Right, I don’t think I mentioned this. You have to be over 18 in order to attend Toy Fair. Apparently Maddie and I don’t look over 18.

“Yes, here are our IDs.”
“Hm, and you’re here for Hasbro. . . with a letter” [she takes this opportunity to read the letter very carefully] “Well, I guess you have all the right stuff. Have a good time.” She stamped a red star onto our registration sheet. SCORE!

We went to the next lady whose job it was to type up and print our badges. She takes one look at us and goes “Um, are you two over 18?”

My Brain: “Of course we are! See this little red star!? This one, right here, where it says I’m representing Hasbro? The one I got when I showed that lady over there my driver’s license? Are you serious!?”
My Mouth: “Yes.”

She spent some time typing, working out payment, and getting us officially registered. Upon completion she sent us to the next area to pick up our badges. The next lady looks at us but before she can say anything I chime in.

We said goodbye to Jonathan and Kevin, grabbed maps, and looked around. We had made it. We were at Toy Fair 2008. 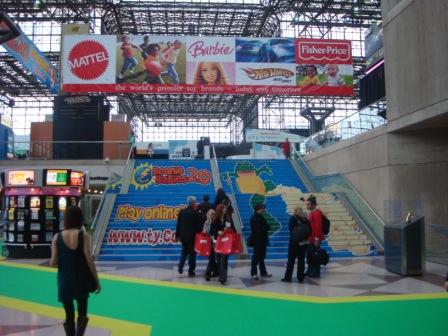 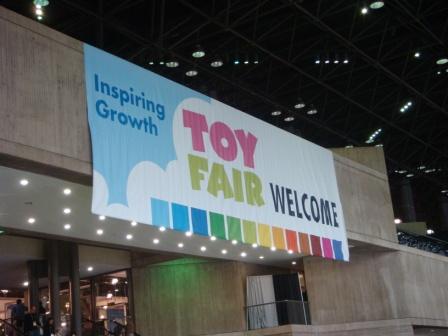 We descended the escalator into the lower level of Toy Fair, had our badges scanned, and then entered the fray. It’s hard to describe our emotional state at that moment. It was somewhere between when all the kids in Willy Wonka first saw the candy room, and when Little Inez won the Miss Teenage Hairspray pageant in “Hairspray”. It was SO overwhelming, you have no idea! It took us a little bit to figure out what to do, but eventually we went to the corner and started working our way up and down the aisles. 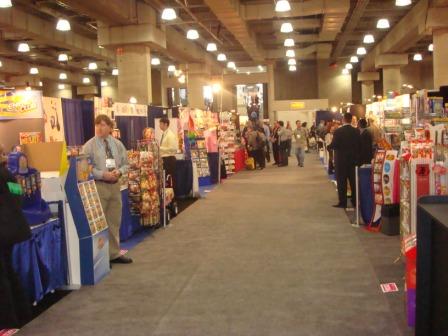 I’ll cover the just the highlights because there was WAY too much to blog.

Pokemon Booth
8 years ago this would have been THE booth to be at. Giant Pokemon, toys everywhere, and an entire wall of trading cards.

Back in my day there were only 150 Pokemon!

Wiggle Racer
This was probably our favorite item in the show. Yes, I know, they’ve been around for a long time, but I’d never seen them before and I want one. This is Kevin Stafford, the marketing guy, riding one. 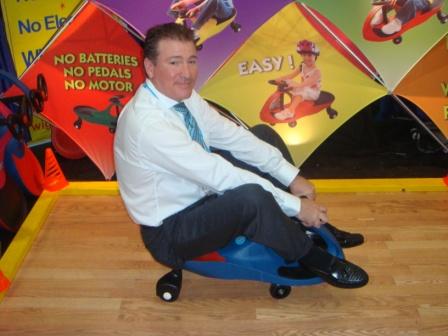 And this is how they work:

We hung out here for a long time, bringing him a ton of good publicity as people flocked to see us play. People started to think that we worked there and were asking us all sorts of questions, which I tried to answer. Then I realized that I should stop pretending to work there and get on with the show, which I did, but I definitely recommend the Wiggle Racer.

Cardboard Fire Truck
I can’t remember the name of the company, but there was a huge supply of large trucks and houses made of cardboard that are color-able. Genius? Genius. 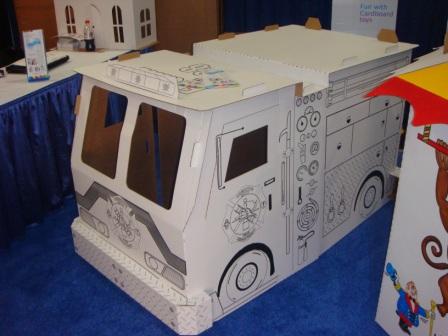 I’m pretty terrible at this, actually, but it’s very fun. 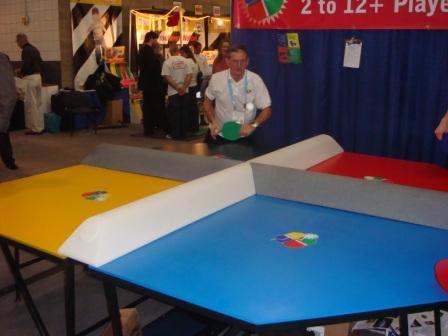 LEGO
We didn’t get a chance to actually go into the LEGO booth because they were doing private appointments, but we did get to check out the giant Star Wars and Indiana Jones LEGO sculptures. 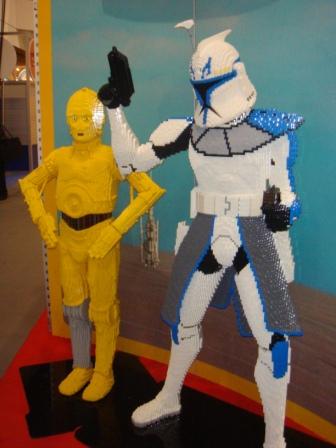 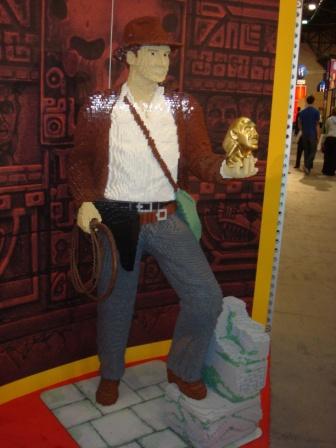 I’d like to take this opportunity to inform you of some observations Maddie and I made while there. First off, we looked under 18 and people realized it. We got some NASTY looks from security and some people in booths. Seriously, we started to count how many scowls and glares we caught. It’s almost as if these people didn’t want kids looking at their toys. Another thing we noticed is that people hated that we represented Hasbro. Hasbro wasn’t actually on the show floor, they had their own building across the street where they had a veritable museum of new toys. The show floor had a lot of individual shop owners and inventors trying to get their products marketed. Hasbro has the ability to steal, build, and market any of these toys on a whim. Guess what we looked like. . . .spies! One lady, who was selling giant pipe cleaners that could be used to build big fuzzy animals, pretty much told us to get away from her booth. She didn’t want anything to do with us.

We walked up to the Disney booth and asked if we could go in (it looked kind of private). The lady looked at us, looked at our badges, and said “Um, let me get you some escorts.”

She walked over to another guy and said “Can I let these two in? They look young.”
Luckily the guy wasn’t as ignorant as she was. He looked at us, then at her, and said “They have badges that say Hasbro. Of course they’re old enough, they’re fine, let them in.” Thank you logical reasoning!

For some reason all of the Nintendo toys were hidden away in the Disney booth. 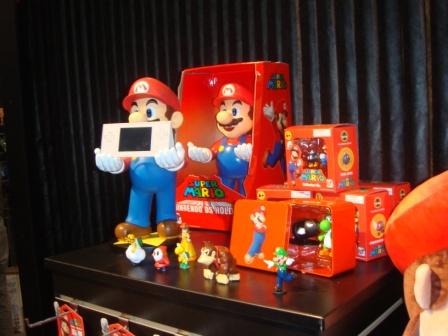 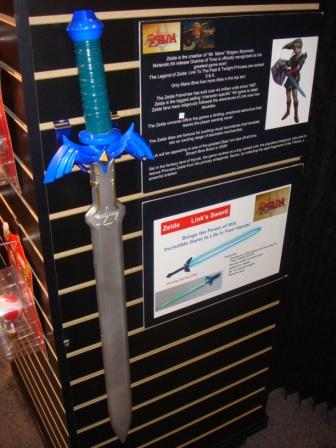 Good idea? I think so. Others? Not so much. 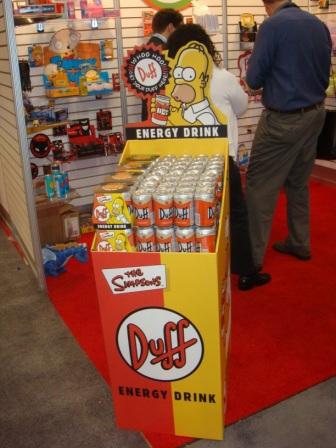 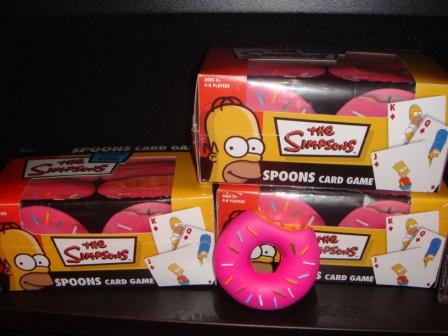 The issue with these is that the donuts were foam, and if you’ve ever played Spoons before then you’d know that 7 foam donuts would quickly become 14 foam donuts. The guy there confessed that he’d never thought of that and would inform his engineers. Therefore, if this game is released with plastic donuts, I take FULL credit. 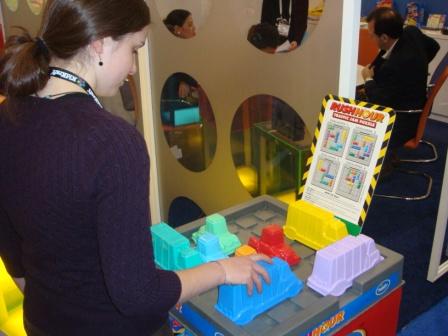 A whole table of Rubik’s Cubes! 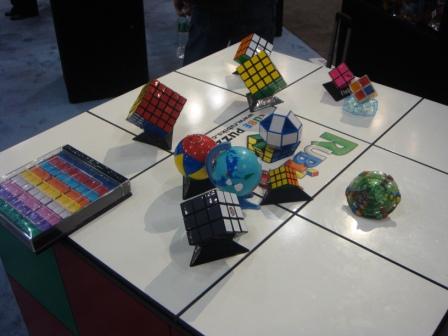 By this time we were starting to run out of toys. Well, by run out of toys I mean that we had glanced at everything once. As we were heading toward some more toys we saw the Elmer booth, which for some reason was selling Bill Nye the Science Guy toys.

“Bill Nye the Science Guy will be here on Monday from 2 PM to 4 PM.”

Our heads almost exploded out of excitement! We checked our watches, it was 1:30 PM. We meandered for a while and at about 2:15 we headed back to the Elmer booth. This is what we saw: 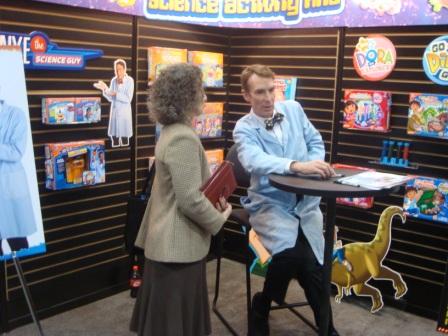 Maddie and I waited a bit and then went up and started chatting with him. There was your typical awkward conversation to start with but then we started talking about MIT, toys, Hasbro, and then I brought up a very crucial point.

“Bill (first name basis, that’s right), would you speak for MIT’s Class of 2011 commencement?”
“Sure, I’d be happy to. MIT would just have to ask me.”

We chatted some more and then had our picture taken with him. He taught us the proper technique for taking your own picture, and this is the magical picture of the day.

Bill is taking our picture with his left hand. 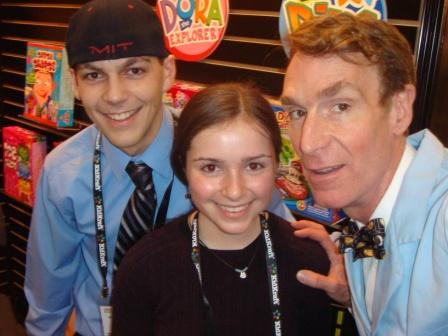 Finally we got some autographs, thanked him a lot, and wandered off in a star-struck daze. 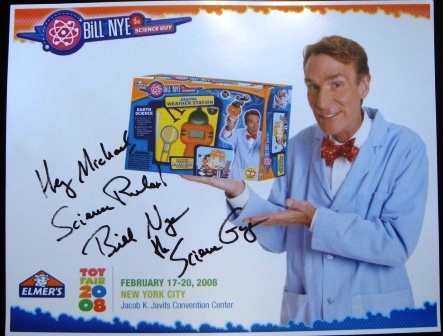 Toy Fair pretty much peaked at that point. We wandered some more, playing with toys, but nothing really matched meeting a childhood hero. Maddie and I got a bunch of business cards, a job offer, and some free toys before deciding to take off and get some dinner.

We got distracted on the way to dinner and explored the TImes Square Toys ‘R’ Us (so fun!) and then ate at TGI Fridays. After dinner it was a brisk walk back to the bus (9 o’clock) and a 4 hour ride back to Boston. One more cab ride, a walk down dorm row, and we were finally back in our dorm. We had awesome badges, an awesome letter, pictures with Bill Nye, and a bunch of free and colorful stuff.

It was an incredible day that I hope to remember forever. Nothing beats going to Toy Fair 2008 as a representative of Hasbro (on their dime), meeting Bill Nye, playing with toys, and eating dinner in New York City. Nothing beats it.