Gravity Rides Everything by Keri G. '10

We are gathered here today to allude to rapidly accelerating bouncy balls and The Moon and Antarctica.

I did many things this weekend during CPW:

-met you. As I said at the Meet the Bloggers party, we write stuff, put it on the Internet, and you guys actually read it. What’s up with that?!
-fed you. Even in the rain. Gotta love a barbecue. Mmmm, polish sausage and Star Market’s entire stock of organic portobello mushrooms. Think of the vegetarians, people!
-dumped (with the aid of other SH residents) six thousand neon plastic balls on you. And you. And you and you and you. Yeah, that’s a lot of bouncy balls. (Pictures, anyone? Seeing as I wasn’t on the receiving end of the drop, I don’t have any myself…)

Notice “sleep” is not on this list, as an 8.02 exam, psets for 5.12 and 18.03, and being CPW rush chair for Senior Haus eliminated any chance of getting some of that. $10 says sleep isn’t on your list of things you did over CPW either. Am I right? Hmmm?

If you didn’t meet me, then you probably met my mom, since she spent the weekend being an MIT mommy and telling you prefrosh and your parents what to expect over the next year. (She’s visiting for a week, during which she keeps trying to clean my room. Thanks, Mom. I think.) The things anyone may have said to you about classes and dorms and having a life will apply wherever you go to school next year – but you’re coming here in August, right? ^_^

But you’re probably all CPW-ed out, so that’s not what this post is about. This is about something far, far more important: music, and how I listen to far too much of it.

…what?! I’m not all about MIT, and neither are you.

There are 35 gigabytes of music on my computer right now (and as a result of this and all five seasons of Daria, I have absolutely no free hard drive space), and the number keeps increasing thanks to WMBR’s massive record library. 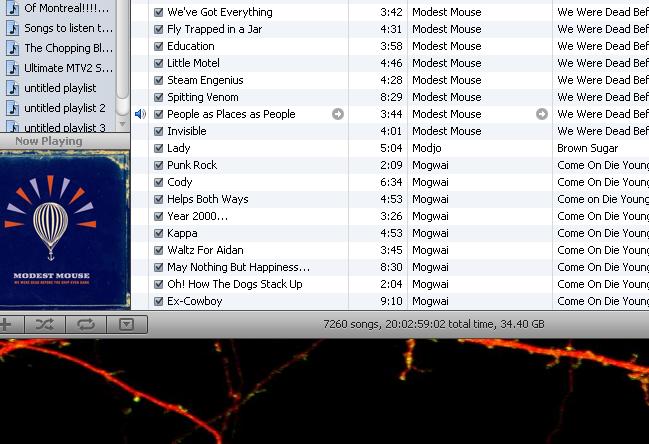 I have absolutely no idea how it happened. It’s about time for an external hard drive.

Once I find a good new release (or an old album by a band I’d never heard of before), my friends don’t stop hearing about it for a good two weeks. With that said, go have a listen to Modest Mouse’s new album, We Were Dead Before the Ship Even Sank. Granted, it’s not The Moon and Antarctica, but that doesn’t mean it’s not worth your time. Ignore any people you hear whining about how the band has “chaaaaaaanged!” or “sold ouuuuuut!” or both, and go form your own opinion instead. How many bands can last in the music industry for over a decade without having altered their sound in any way? Name two. I dare you to.

Anyway, this album is my favorite new release as of late, guaranteeing that I will a) give it far too much airplay on Hanna’s and my show and b) shamelessly promote the thing to all of my friends. (And to the Internet!) Don’t you underestimate me – I did the same thing two months ago, when Sondre Lerche’s Phantom Punch came out.

All of this is leading up to the tried-and-true open question: what have you been listening to? Any songs or albums that you’ve had on repeat? Anything that you just plain love? I want to hear about it! It’ll give me something to listen to while studying for tomorrow’s 5.12 exam!

24 responses to “Gravity Rides Everything”