MIT is home to some very dedicated gamers.

I am two days away from finishing my first semester at MIT.

How did that happen?

Most of campus is already cracking down in preparation for finals, which are now less than a week away! Even freshmen like myself have begun putting our study habits into high gear. Although you’d think that the stress level on campus would be pretty high right now, most of my friends seem to be coping pretty well. In fact, a few students apparently had so much spare time on their hands, they actually decided to provide the rest of us with a few games and toys to play with over the next few days.

Monday afternoon, I was walking across the east side of campus for my UROP (more about that later) when I noticed a few people gathered in the courtyard in front of the Green Building. Intrigued, I wandered over and began to notice a few strange shapes scattered across the courtyard, seemingly at random. As I got closer, I realized that the mysterious objects weren’t miscellaneous debris at all – it was a hack! 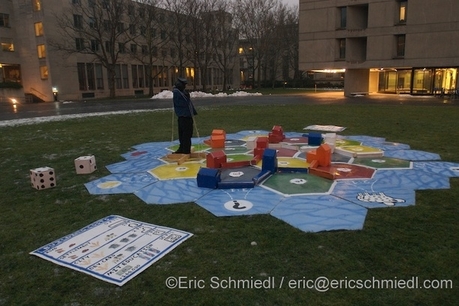 It was a giant game of Settlers of Catan! Although you may have never heard of this amazing game, it’s quite popular here at MIT. In my humble opinion, and the opinion of millions of fans, it’s quite simply one of the best games in the world. Looking the hack over, I was happy to see that the recreated version was completely faithful to the original – apart from a few minor, MIT-themed variations. Instead of the standard Building Cost card, the hacked version had this one: 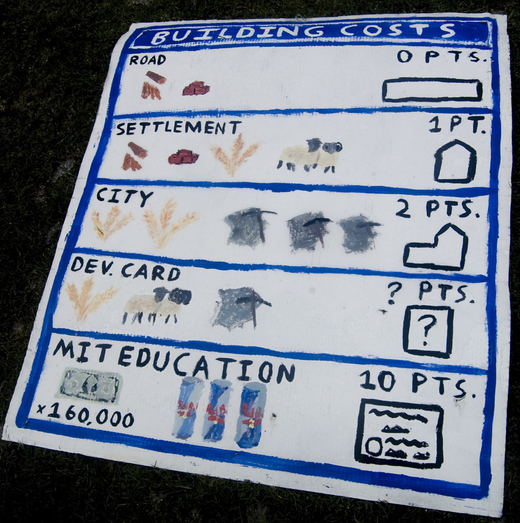 (*EDIT 1/11/08: Visiting this entry again, I happened to notice that some of my photos have changed in size. I’m not quite sure how this happened, but I have decided to remove the photos until I can fix this problem. Sorry for the inconvenience! -Paul)

Likewise, the traditional “robber” piece was replaced with a mock-up of a Campus Police officer. If you look closely, you’ll notice that he’s holding a donut. 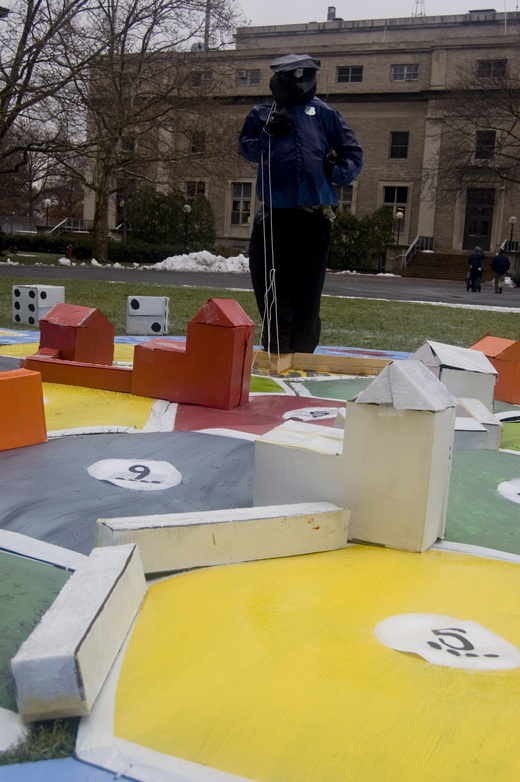 Thoroughly impressed, I left Settlers and hurried on towards my UROP. Scarcely had I crossed the street, however, when I noticed that something strange was going on with the Media Lab. Could it possibly be another hack? 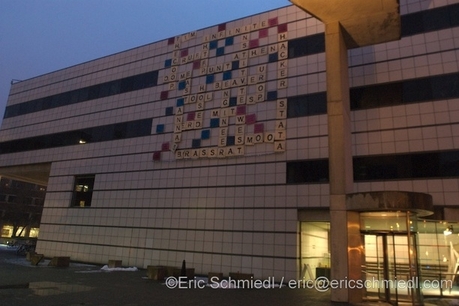 Yes, it was! Hackers had constructed an MIT-themed Scrabble board and somehow spirited it onto the side of the Media Lab, which I have no doubt was an extremely difficult feat. 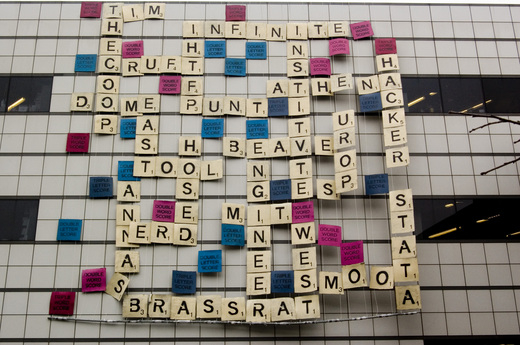 I imagine the hackers chose the Media Lab because the side of the building rather resembles a Scrabble board anyway. This next picture really shows just how huge this hack really is. 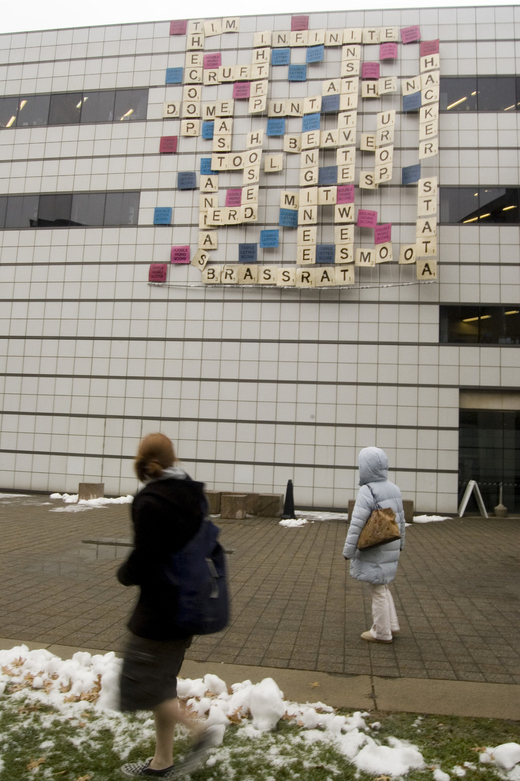 So far, I had already seen two new hacks – could there be more? I resolved to hunt around campus as soon as I was done researching for the day. Fortunately enough, I didn’t have to hunt far – hackers had placed yet another game in front of MIT Medical, right next to my lab! 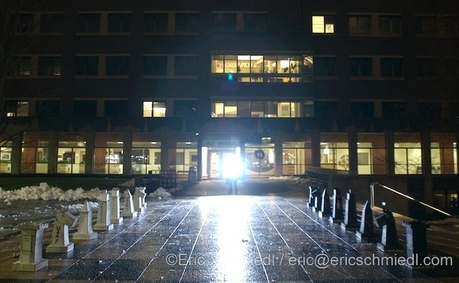 MIT chess! The white pieces represented the administration, while the black pieces featured the different dorms and living groups on campus. A little anti-authoritarian, perhaps, but it’s all in good fun. For the living groups, the different pieces included various halls of East Campus, including Fifth East, Beast (Second East), and the main desk; Senior Haus; the FSILGs – fraternities, sororities, and independent living groups; Simmons (my dorm!), and McCormick. The administrators and other authority figures included President Hockfield, Chancellor Clay, faculty, alumni, Physical Plant, and the Campus Police.

Those were all the hacks I could find, but when I returned home after my UROP, I found an email from someone who identified himself only as “Milton Bradley,” who informed me that several other hacks had also been put up over the weekend, though some had been taken down. Mr. Bradley not only pointed me to a site with photos of these other hacks, he also suggested that I put some of these photos on the MIT blogs, for all the prospective students to see.

How could I disagree? Few things make me more excited than hacks, so I was happy to take a little time off from studying for finals and put together this blog entry. Other hacks across campus included Mouse Trap in the Stata Center, Cranium in the Brain and Cognitive Sciences Building, and turning the usual campus maps into Risk boards. Here are some pictures: 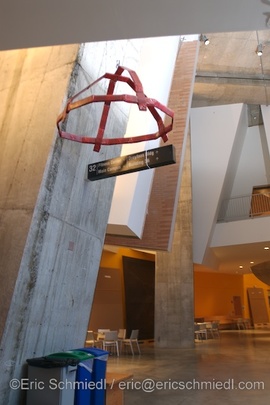 Would you like a little cheese with your Stata Center? 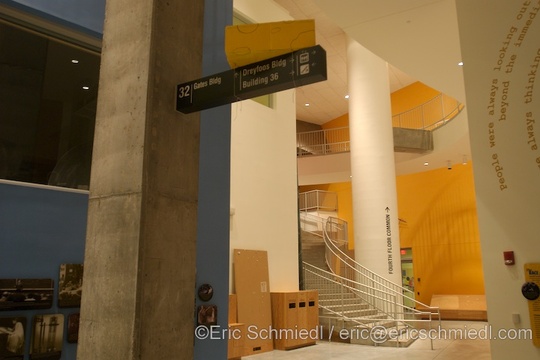 As a crowning move, the (in)famous Hilltop Steak House Cow was transformed into a mouse. Hackers just can’t leave the poor cow alone! 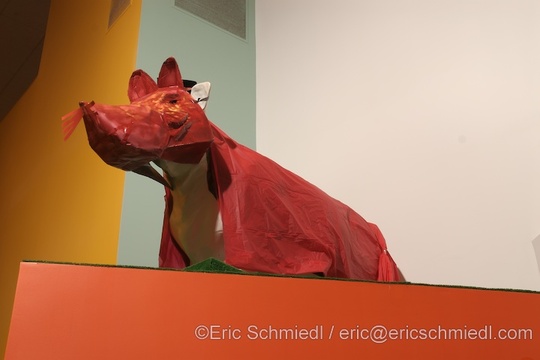 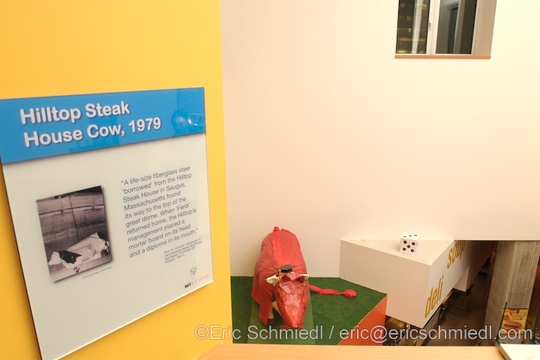 Just across the street from the Stata Center, the Brain and Cognitive Science Building was another hotspot of hack activity. 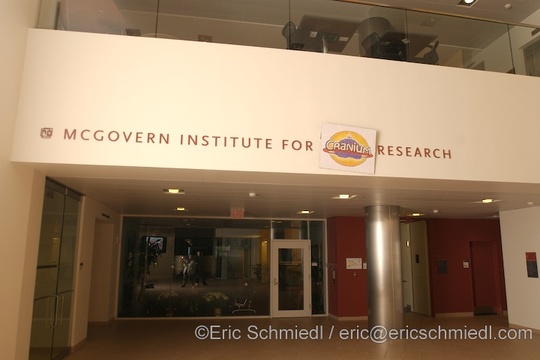 The four-square Brain and Cognitive Science logo was begging to be transformed into the four categories of Cranium. 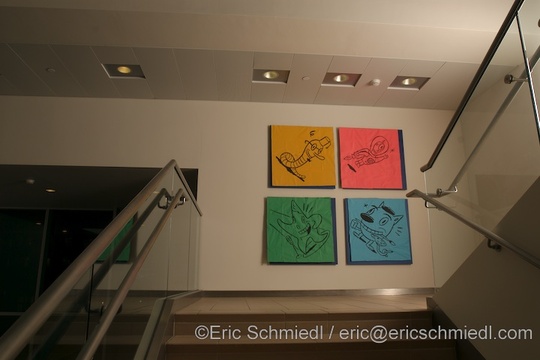 Hackers even managed to hang the Cranium die on the face of the building. Most impressive! 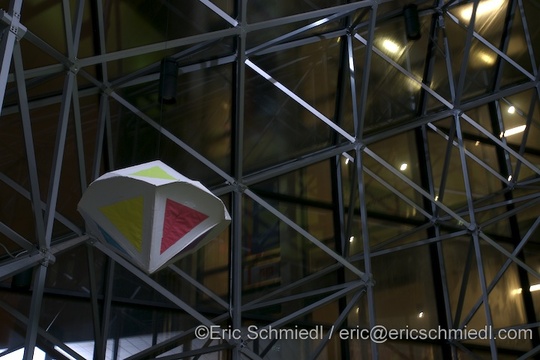 Sometimes, finding your way around campus can be a little Risk-y. 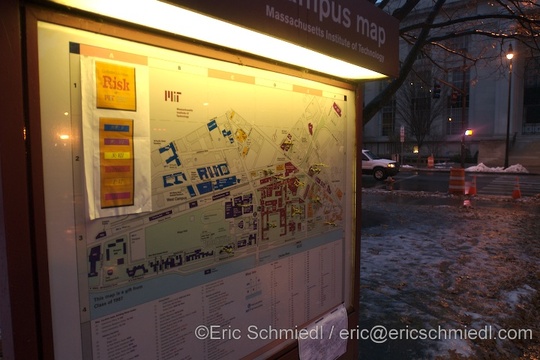 Hopefully visitors weren’t too confused by the strange soldiers on the map. 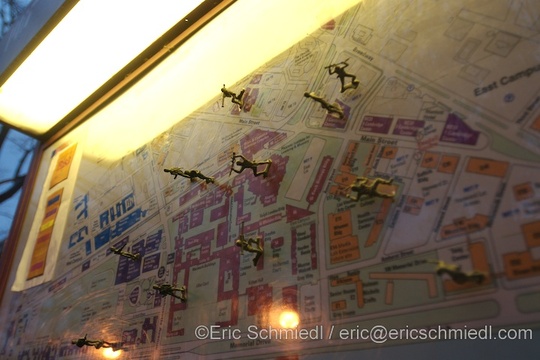 And that’s it – quite an impressive bunch of hacks, aren’t they? As always, huge congratulations to MIT’s hackers for producing yet another thoroughly enjoyable hack – let’s hope there’s even more during the spring semester! Additional props to Eric Schmiedl ’09 and Shen Chew ’11 for all their awesome photos.

Thanks for reading, guys. Best wishes to all the EA applicants as you await your decisions.