The coolest thing that never happened to me... plus, the journey back Boston way.

I know, it’s a bold move for an inexperienced blogger like me, but seriously, yesterday was almost the coolest day of my life, ever, and it just can’t wait until after the license plate game.

You know who Bruce Campbell is, right?

From “Xena: Warrior Princess?” (my favorite television show for at least 3 years)

Well, he was in “Spider-Man” for about 3 minutes, too. Surely, you had to see “Spider-Man?”

Well, anyway, it turns out that he just directed a new film, “The Man With The Screaming Brain,” and what better place to premiere it than in Boston, at the Coolidge Corner Theater, a lovely nonprofit independent theater located a scant mile and a half from MIT?

While Bruce was busy in Bulgaria or wherever directing and starring in “The Man With The Screaming Brain,” he also found time to write this brand-new book: 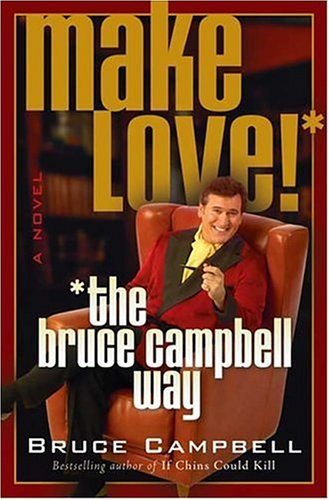 And, seriously, what’s cooler than Bruce’s picture on the cover? I conceived that as a rhetorical question, but actually, it has an answer: how about BRUCE CAMPBELL DOING A BOOK SIGNING AT THE BROOKLINE BOOKSMITH, right across the street from the Coolidge Corner Theater?!

I seriously don’t think you get how exciting this is. I just have a feeling that you don’t.

So, I asked like 20 other people if they wanted to go to this with me and they were all “Who’s Bruce Campbell? What’s ‘The Evil Dead?’ Xena what?” Well, actually, Ruth kind of knew who he was, but she was busy entertaining her mother. So, since my mother was in town (and she is the one of the biggest Xena fans in all recorded history), I had the great idea that after work, she and I could drive down to Coolidge Corner, buy his book, which I’d been meaning to pick up for summer reading anyway, and tell him just what an inspiring human being he is.

But, uh, this is a lesson, prospective MIT students–never attempt to drive in downtown Boston, ever. Also, right after work is rush hour, and that will only exacerbate the situation.

As I learned while teaching MIT ESP SAT Prep, “exacerbate” is one of the 50 most common words appearing in the verbal section. I thought I could make this blog educational too. Also, it’s one of my top 5 favorite words in the English language.

But back to my saga: we drove around and around Coolidge Corner until I got dizzy and decided to go see what was up with the book signing logistics. Alas! Tickets sold out hours in advance of Bruce’s appearance! I was upset, but probably not as much as the people in line behind me, who had dressed in full zombie regalia as a tribute to “Army of Darkness.” Seriously, how many people can there be in Boston who even know who Bruce Campbell is? Like, 50? And then what subset of those 50 want to get a book signed by the world’s most famous B-movie actor? So frustrating.

The moral of the story is thus–quit your job and follow Bruce Campbell’s book tour around the country.

Despite the fact that I kind of forced her into the worst driving experience ever, I think Mom still managed to enjoy herself in Boston, since we had gone to Pizzeria Regina the night before. She makes a point of ordering an large pepperoni pizza to take home with her after every trip to Boston, and has found it almost impossible to eat at any of Harrisburg’s otherwise fine pizza establishments anymore. So, this is what the sign looks like:

Now you have no excuse. If you ever happen to be in Boston (say, visiting MIT?), be sure to take the green line to Haymarket and check it out at its original location (11 1/2 Thacher St.)–I recommend the St. Anthony’s Pizza (with real, homemade sausage), but for the vegetarians among you, the Broccoli Aglio e Olio is also fantastic.

Broccoli might be my second favorite food, after potatoes.

What did my mom have to endure to get to her favorite pizza in the entire country? Well, a seven-hour drive from Harrisburg, also transporting my cousin Matthew up to visit his Aunt Jen in Milford, CT. Along the way, Matthew decided that we should pass the time by playing the license plate game–you know, see how many different state license plates you can find along the road. Of course, he got bored after finding PA, NY, and NJ and decided to start yelling out the answers to crossword puzzles he was doing, but Mom and I found the whole thing fascinating. All in all, we saw about 36 states (plus Ontario) in around 6 hours (hey, 72%, that’s an A in 7.06). Most importantly, we saw Hawaii, which is basically just an automatic victory in the license plate game because once you get it, everything else is a gimme. It’s like getting a double Yahtzee bonus. Also, New Jersey has way too many different license plates. And I’ve thought about this a little too much.

Aunt Jen just had a baby, my new cousin Joy Ingrid, and I feel obligated to post a picture of her for you even though
a) I look awful in it.
b) I think babies are stupid in general. 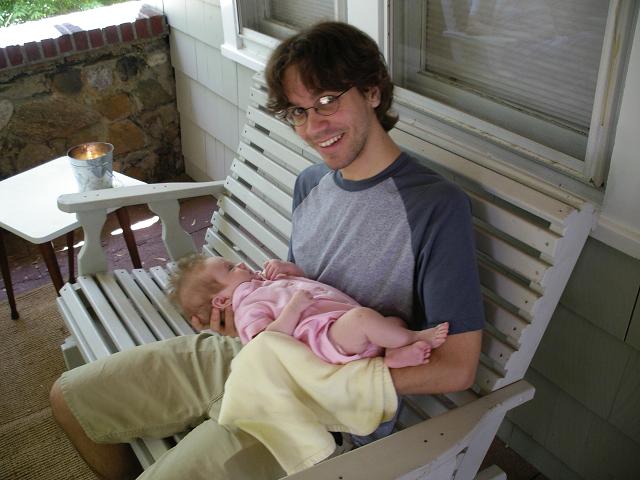 But, there we go now! Babies are kinda cute, huh? Especially Joy.

Then I saw this Amish guy selling baked lima beans and lemon sponge pie at the Broad Street Market talking on a cell phone on my last day in Harrisburg. Maybe he was just dressing up to be authentic, although in that case he really nailed the bizarre Pennsylvania Dutch accent.

But my real surprise of the day had come half an hour earlier at Broad Street Market, when I saw young Amish boys and girls patronizing “Golden Road,” our only local pho establishment. Now, I’ve seen the Amish before (in Harrisburg), and I’ve seen people eating pho before (in Boston), but I have never seen the Amish eating pho. How appropriate that this merging of my two cultures should happen on the day I was getting ready to leave one for the other.

And that should take us to where I left off last time. So, now you see–if my near-encounter with almost-famous Bruce Campbell had to follow Amish kids eating pho, would anyone really have read this far?

And, well, I never believed in linear time anyway.

5 responses to “Hail to the king, baby.”