Have you seen your mother baby standing in the shadow? by Sam M. '07

A visitor's guide to Harrisburg, PA, with original soundtrack by Billy Mack.

…and have you seen “Underworld?” 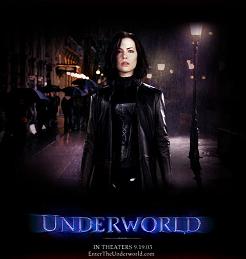 My friends in Harrisburg and I have a long history of watching awful horror movies (think The Evil Dead trilogy, except with less irony, lower production values, and no Bruce Campbell). Since my last selection, “Monsturd,” didn’t go over so well with the group over winter break, I knew that I had to pick a winner this time or face expulsion from The Midnight Society or whatever. So, with Allison’s new [Video Retailer] Movie Pass in hand, I vacillated between “Friday the 13th Part 9: Jason Goes to Hell” and “Drainiac” for about 5 minutes before finally stumbling upon the new, extended DVD release of “Underworld.” Although the budget was a bit higher than our usual fare, I knew it would be a winner, since I had already seen it while rushing one of MIT’s 28 fraternities in the fall of my freshman year–while I had no intention of ever joining the fraternity, I, like most freshmen, quickly realized that frat rush is a great time after orientation to meet some interesting gentlemen, indulge in decadent buffet dinners prepared by real chefs, and, of course, score free tickets to movies that people shouldn’t really be paying to see.

After a quick “coming attractions” replay of the pivotal scene of Vampires vs. Zombies, featuring some random nonvampire guy pulling a stake out of his own heart, we all sat down with a bag of cheddar cheese cubes and prepared for the feature presentation.

Alright, so Kate Beckinsale is a vampire, which you can tell because all vampires always wear black leather (see above). The vampires, who live on quaint country manors and speak with British accents, are at war with the werewolves (aka “lycans,” which is pronounced the same as “lichens,” so that’s what I’ll call them) who live in the sewers and speak with American accents. However, it’s kind of an even match because the vampires have developed magic bullets that are loaded with “silver nitrate” (portrayed here as a viscous silver solution; yeah, right), while the lichens have developed similar bullets loaded with, uh… concentrated sunshine or something. What does that mean, exactly? Charged solar cells? Distilled positive thinking? Fluorophores? No, they wouldn’t be that clever. Anyway, the point is that the bullets are supposed to be instantly fatal and they fire them at each other from semi-automatics, but every shot from both sides misses because this movie is actually “The Matrix.”

Now, let me know if I snow anybody here–it turns out that the vampires and the lichens evolved from the same genetic ancestor and now the lichens want to breed a hybrid vampire/lichen, and that’s bad, but actually it’s good because Kate Beckinsale falls in love with the only guy in the world whose cells can accept both vampire and lichen antibodies, but actually it’s kind of bad because at the same time Kate’s evil ex-boyfriend (there are both good vampires and bad vampires) is trying to stage a coup of the vampire empire, which may actually be evil and misguided itself, but all of that is irrelevant because halfway through the movie Kate decides to get serious, slits her wrists, and uses the blood to summon Super Vampire Lord BILL NIGHY… 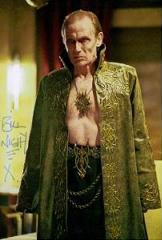 …who, as Allison pointed out, is better known as aging rock star Billy Mack from Love, Actually… 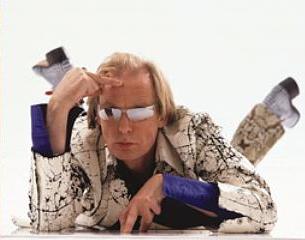 …and, really, when somebody points something like that out, the film is pretty much already over for me. Bill actually turns out not to be a benevolent leader as Kate had hoped, but rather a ruthless lichenphobic despot who only grows more invincible the more time he spends on Earth, but I didn’t really catch all that because every time he came onscreen I would imagine him singing, “I feel it in my fingers, I feel it in my toes…” and then Hugh Grant would suddently appear to me, looking dashing as always, and start beating up the vampires with his umbrella or something, and there would be a kid in an octopus costume too, and half the movie would be subtitled in broken Italian. Despite Bill slicing through lichens with a seven-foot sword, chaining his own pregnant daughter to a sunlit post, and coughing up a hairball at Kate, the only thing I really took away from Underworld was that “…Christmas is all around me, and now the feeling grows.” Thanks a lot, Allison! Happy Xmas to you too! Love actually is all around us.

And then the best part is: sequel. Featuring more Bill Nighy! Oh yeah!

Before I forget, happy birthday to Roger Ebert, Paul McCartney, and Mike Church.

Beyond renting terrible movies, what is there to do in suburban Harrisburg, Pennsylvania? Well, not too much, although it is one of the 5 least stressful metropolitan areas, ranking even above the OC. Unlike “The OC,” however, I don’t think people would want to watch a teenage soap opera about Harrisburgers, even if we could get the nation’s hottest emo bands on the soundtrack.

Last night, Shawna and I went to the only Starbucks in a 10 mile radius (formerly the greatest sledding hill in a 10 mile radius, thank Vartan) before realizing that neither of us really likes coffee and a lot of the people who hang out at our Starbucks are stupid and pretentious. Luckily, they had a party game there called Whoonu, by the makers of Cranium. Now, normally I would be opposed to handing out free advertising in my blog, but this game really rocked and I think you should buy it. Actually, I have no idea how to play it since it’s for 3-6 players. But we made up our own game: each player would, in turn, hold up two cards, and then the other person would have to guess which card they liked better. Sometimes the choice was easy: “Saturday morning cartoons” vs. “saliva.” Sometimes, it was incredibly difficult: “seaweed” vs. “kittens.” God, I hate kittens. Buzzed by iced lattes, we exhausted the deck of 300 cards in about half an hour. Luckily, we had divided them into equal piles of “good” and “bad,” so we were able to continue playing our game using only the “bad” pile.

So, continuing at this pace, how long did it take us to determine the single worst thing in the world? I leave this as an exercise for the reader. I can, however, tell you what we agreed on as the worst thing in all recorded history: marching band. Maybe my opinion would have changed had I joined the MIT marching band, with its coveted SPAM scholarship (!) and legendary “marching band on ice” performance. Hey, I’ve still got two years.

One more thing, now. Still relative fresh from my 120-mile expedition through the New England countryside, I gladly agreed to take a bike ride with Ben though the Pennsylvania suburbs on Wednesday. One difference between New England countryside and Pennsylvania suburbs is that one of them has shade and the other one has cars. However, we still managed to make it to Shana’s house (after a 3-mile detour through Wildwood lake) and back before dinnertime, only to discover that she was still caught up in her job at the (totally radical) Midtown Scholar bookstore. Anyway, the visit resulted in Shana giving us a call the next day, which resulted in an expedition into the woods to Ben’s dad’s house, which has lots of cool toys–like, say, a sledgehammer: If you give a mouse a cookie, now… anyway, we sat at Ben’s for hours, watching fireflies, fearing garbage-eating bears, discussing French culture, and wondering who would win in a fight between Bruce Lee and Chuck Norris. What do you think? As Bruce Lee was apparently quite spiritual, Shana used Zen koans to support her case, like the one about the monk eating the blissfully sweet strawberry while suspended on a vine between two ravenous tigers, while Allison cited that one episode of Walker: Texas Ranger where the bad guys shoot out the tires of Walker’s jeep and then break his radio so in order to save the town’s water supply or something, he has to tame a wild stallion, which he does just by looking at it. While Shana may have been a little more compelling from a debate point of view, I have to say that I’ve been a fan of Chuck Norris since his brief but brillant appearance in “Dodgeball,” which I am proud to admit that I paid to see four times.

So… Bruce or Chuck?

Well, that’s Harrisburg, Pennsylvania, or half of it, anyway. Stay tuned for the story of the next two days when I get back to sweet, sweet Boston on Monday.

And someday, you will hear of this 120-mile bike trip. I just need some time to do it justice.

And a happy phi day to all, and to all a good night.

One response to “Have you seen your mother baby standing in the shadow?”