This blog post hopefully not brought to you with an NDA.

hello from seattle!
Also, another nerd circus. (re: Chris (M)’s post from a while back)

Oy! Welcome to the much-belated “what I’m doing this summer” post.

Ok, post over, back to work/weekend (maybe both, I’ve got a lot of work to do this weekend).

Just kidding. Unfortunately, the only ones of you who might’ve believed that my post ended there are likely the ones viewing MIT admissions on smartphones, to whom I say “ptooie” because I don’t have a smartphone and I think data plans are a rip-off. And because I wish my desktop computer’s LCD screens would have a reasonable pixel density compared to your phones.

Yeah, text-scrolling-based humor probably took a severe hit when screens started growing beyond 80×24 (characters, not columns – durned kids today, always thinking in pixels). Back in my – err, my dad’s – day…

Back in January, when I was enrolled in this year’s Silly Robot Extravaganza 4000, I looked at my to-do list and saw the item that had been sitting on there for at least a month: get a job. Eww, jobs.

Anyway, being extremely lazy and procrastinatory, I decided to tell myself I was going to do it and proceed to do next to nothing. My interview process went as follows (note that I am too lazy to use <ul> and whatnot):

-Talk to sponsor corporation representatives at MASlab sponsor dinner, meet Guy Steele (!!!)
-Drop in on a random career fair at the student center completely unplanned
–schmooze
–collect swag (too many free bags! Companies: more flash drives and USB gadgets, ya hear? I have enough bags!)
–drop off resume at Microsoft table and chat with representative.

The last subitem on the list wasn’t one of my intentions. However, I can’t say now that I regret it at all. Although I’m saving that topic for another post (perhaps when my internship is over and I’m not working around-the-clock to meet my own personally-set deadlines), it comes up here because:

Microsoft sent me to Redmond! Huzzah!

Although I’m a field intern at their Cambridge office – a mere unfortunate stone’s throw from MIT (your stones would hit the roof of MIT’s building E60, probably (not (yet) tested), where I spent almost three summers working with MIT’s Edgerton Center, and where I spent the third quarter of my sophomore year of high school working on MIT’s FIRST Robotics team #97. Which comes up as a point of discussion several times a month and probably will for the rest of my life, for better or for worse (same goes for this).

Uhh, sentence fragment from two sections above resuming… too much C++, not enough english recently.

**this blog post probably leaks memory, I don’t free anything and there’s no RAII

Anyway, although I’m a field intern, Microsoft this past past (past) week flew most of their field interns out to the main Redmond, WA campus for some “intern events”! Hooray, summer camp! Or something. 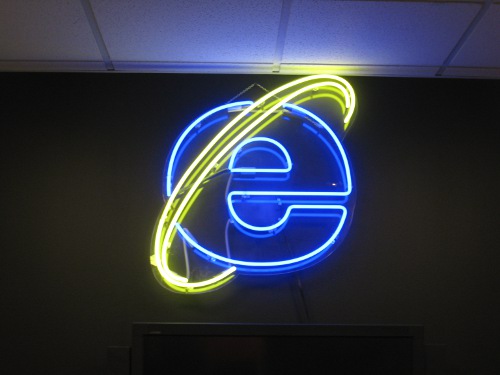 Yes, I actually saw this. No, I didn’t take the image from a recent gizmodo post.

We six interns from Cambridge (host to more than six interns, but we were traveling as one unit) got to Redmond on Tuesday the 6th, where I proceeded to make all sorts of plans to explore the town, which definitely did not involve watching TV and falling asleep (relatively) early.

Wednesday and Thursday were the bulk of the trip; apparently traveling cross-country takes the better part of a day out of you. News to me, as this was my first time on the west coast! I loved it, although I don’t know if I’d rather live there than Boston. All I know is that I’d like to see some more of it. Who knows, maybe I’ll go back again and explore a bit, this summer…

On Wednesday I caught a cab from Microsoft’s campus into Seattle to visit my aunt; my aunt and uncle live in Seattle and I’d never been able to visit them in their state. After an excellent walk on trails that went right under the highway – something so urban-ly (not urbanely) weird to me, compared to parks in Boston – and delicious sushi for lunch, I caught another cab to amazon, where I met up with a friend from school to go rock climbing at a gym somewhere in Seattle. There’s a large group of MIT interns at Microsoft this summer, and it’s pretty cool to be able to find people from MIT – even people in my grade – working in amazing internships and jobs all over the country as early as freshman summer.

After rock climbing I scrambled (called a cab without hesitation, and proceeded to sit and wait calmly for fifteen minutes) and made it back to Microsoft’s campus in time for the real highlight of the week: the nerd circus.

Microsoft’s intern program definitely takes care of its interns when it comes to benefits; I had a cost-free (except for souvenirs and the cost of the non-Microsoft-planned rock climbing) week in Washington, and to top it off, this: they bought out an entire showing of Cirque du Soleil’s Kooza. What’s more, I had a center seat in the front section; lucky me! The show was personalized, but not at Microsoft’s request, hint, demand, or furtive eyebrow-waggling; no, the circus performers threw in tidbits like the occasional well-placed Windows sound effect or iPhone 4 “you’re holding it wrong” joke, just for us. The show had me doubled over laughing repeatedly, but that’s not what’s special – an episode of Psych can occasionally do the same thing – and that wasn’t throughout the performance. It was the scariness, fluidity, and 8.012-tacular (check OCW if you don’t get it) awesomeness of the acrobatics that blew me away and kept my heart rate semi-unhealthily high throughout the performance. I’ll admit, the acrobatics seemed so dangerous that at times I started (minimally) nervously sweating solely out of fear for the performers. The show wasn’t just a robotic display of gymnastics, though; the performers reacted to the audience quite well after their stunts. I hope we were a good audience; they deserved more than the standing ovation we gave them.

ANYWAY, I believe they’re performing in Boston now and all y’alls should go see them when or if you get a chance. My seat is, in my opinion, more than worth the near-$120 price (only a few months of your fancy shmancy smartphone’s data plan. Yeah, I’m talking to you, silly people with locked-into-data-plan-smartphones)* (see end of post for a far too relevant footnote), but there are cheaper seats available for the less enthusiastic.

The madness does not stop there, however. 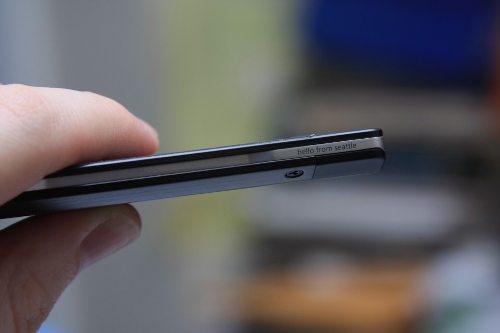 (the ‘hello from seattle’ is engraved on every Zune) 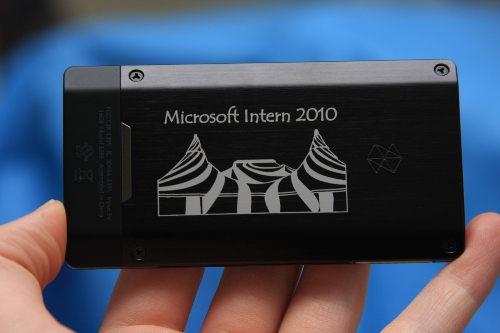 At the end of the show, Microsoft gave out 16GB Zune HD players to all of this year’s interns. I had been looking into buying a portable FM radio with a large honkin’ antenna for the past few weeks, but the radio reception on this (with the additional benefit of an HD radio receiver/decoder/thingamajig) blows away my other portables, and it stores a hefty amount of music. I am much impressed, although I’ve found (and internally reported – massive field test, eh? ;) ) a problem/complaint or two with it. I don’t know if I’d have bought one on my own, to replace the $1-from-woot.com Sandisk 1GB mp3 player / FM radio I’d been using, but receiving it for free was certainly nice.

I’m not trying to sell you on Microsoft – there are a small number of things I haven’t liked about my employment there, and a few things I still don’t really like; for example, I am writing this on the T (Boston’s subway) on my way home from the office, at about 10PM. However, some of those things are my own fault, and others are to be expected with a large company; I don’t have the time to paint a full picture for you just yet. If this post was to be about jobs and internships in college, I would highly recommend checking out positions Microsoft, along with the rest of the “big dogs” – Google, Amazon, Apple, et cetera. However, I may do a post about working at Microsoft later on. This post is just supposed to be about my four day trip to Seattle, including an amazing visit to the (nerd) circus. The Microsoft-heavy content is hard to avoid, though, when I seem to be spending all my time working at or traveling with Microsoft.

Regardless, I hope you enjoyed my post and are thinking about going to see Cirque du Soleil. It’s a very impressive show, and I wanted to give the performers some recognition. They deserve it. Since I don’t think I managed to clap enough after the performance – thank you, Cirque du Soleil, for a great experience. And a special thumbs up to Mr. Circus Unicycle Man for a really cool unicycle mount that I’d never seen before – not more memorable than the rest of the show, but it stuck in my head (I’d give a thumbs up to another set of performers, but if I did I might give away their act because I don’t know how else to describe them). Anyway; if any of the circus performers from that show read this blog, they’ll probably know what I’m talking about. If not, I’ll just go on rambling and wasting your time; if you’ve read this far, who knows what else I can get you to read ;)
-Cam

*footnote: word on the street is that we’re getting more than just Zune HDs – woot woot!. Ironically, as a very-tired-that-day field intern, I found out about that from an Amazon intern and then from Gizmodo before I found out from Microsoft.

**double footnote: the subtitle for this post, and the delay in bringing it to you, was because I needed to check about Microsoft confidentiality before posting it. Smart thing to do.

***actually, I just found this blog post on a bar stool in California, disguised as an iBlogPost 3G.

14 responses to “hello from seattle”