The second in a trilogy of Berlin photo entries, featuring Michael Jackson.

DID YOU KNOW? Conservative pundit Ann Coulter once described on a VH1 special how she smeared herself with purple Crisco before a Grateful Dead concert.

As promised, the second part of a picture entry. Check out yesterday’s entry for, well, more pictures. 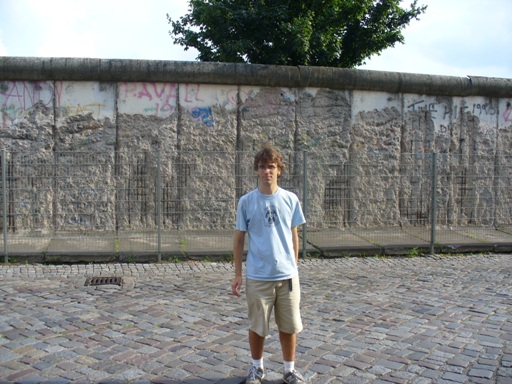 I, I can remember standing by the wall. As somebody said during Amazing Race 6, the Berlin Wall is actually not so fearsome anymore. It’s kind of small, broken, and covered in graffiti. The incongruity between what the city currently looks like and what everybody knows happened there really got to me. 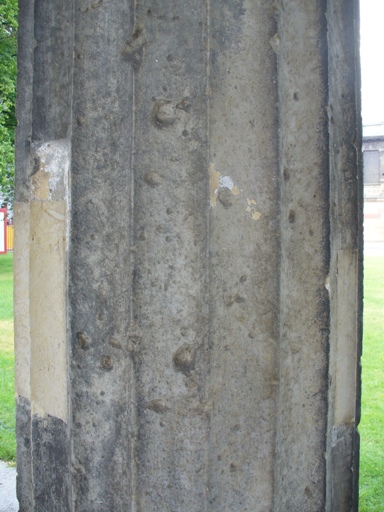 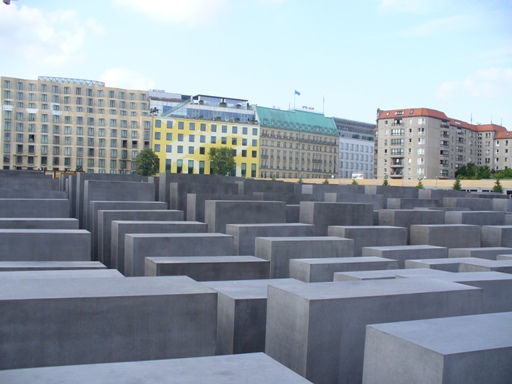 This is not a level from real-life Q-Bert, but actually a completely abstract holocaust memorial. It’s been speculated that it represents a Jewish cemetery, like the one in Prague. This is actually a field of huge stones, and you can walk through them. Definitely a unique experience. 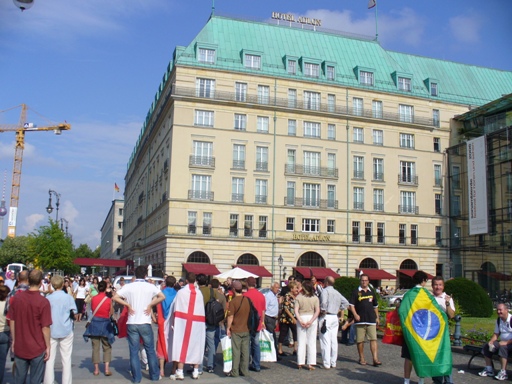 But most moving of all was seeing this, the hotel that Michael Jackson dangled his baby out of a year or two ago. 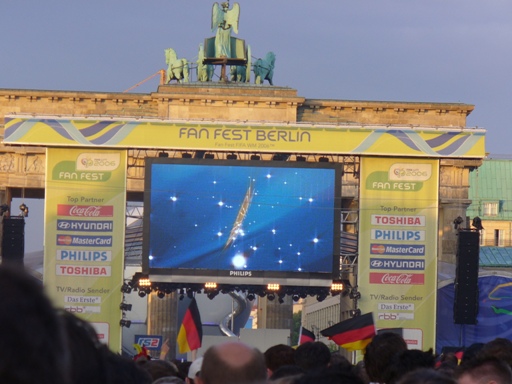 That night, the door at the hostel where we had stored the bags of 8 people, was totally, unbelievably broken. The lock just didn’t want to turn. That sucked eggs. So we asked the lady sitting there, who seemed to own the hostel, to help us. She tried some other keys, and we tried in broken German to explain that, no, we weren’t trying to fit 8 people in the 2 person, and, no, the key wasn’t the problem. Finally she started yelling at us. Then she called her husband, who came and yelled at us too. Then he smashed the lock off the door with a wrench. And that is why you should always carry WD-40. 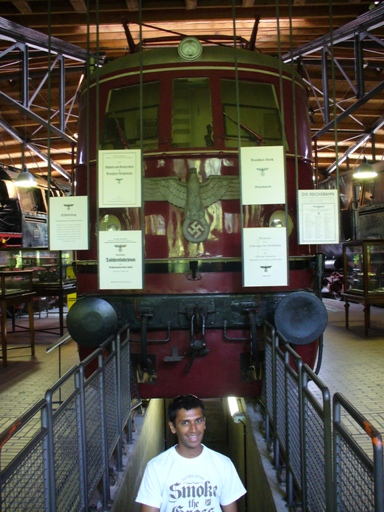 We went to the Berlin Engineering Museum, which is a strange destination for like 7 MIT students who are supposed to be on vacation, but whatever. The exhibits were pretty interesting, and my roommate Kunal was unnervingly excited about getting a picture in front of Hitler’s train. 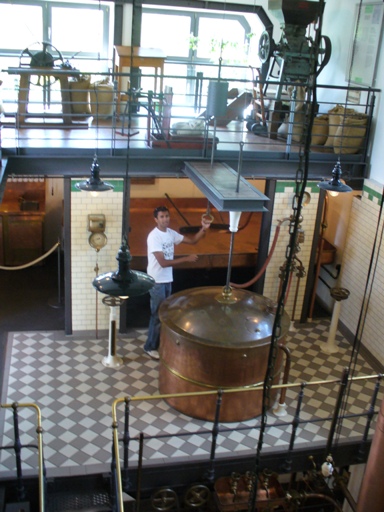 Kunal was also understandably excited about getting his picture taken in front of an authentic 1800’s brewery reconstruction. 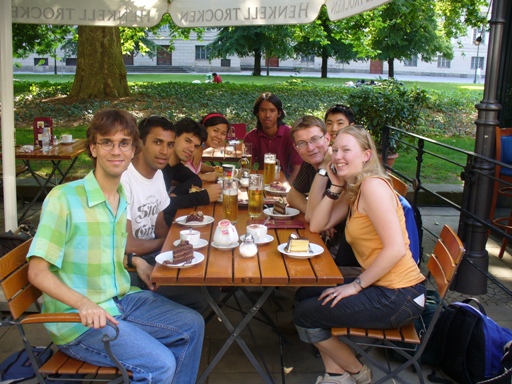 After the engineering museum, we were hungry something fierce, so we decided to a small café with over 85 kinds of cake to indulge in the German tradition of Kaffee and Küchen (coffee and cakes). Since most of us were pretty thirsty and it was reasonably hot, about half of the group turned this tradition into Bier and Kuchen, but I can’t imagine the Germans protesting very much. Note that I myself got a pot of hot tea and at least tried to adhere to the original concept (also note that the pot of tea, which yielded two teacups, cost as much as half a liter of beer).

But that bottle of mustard I had bought yesterday (did you notice that?) proved to be fateful, as it was in a glass jar, which prevented me from entering the fan fest and cheering with like 20 billion other World Cup fans or something. 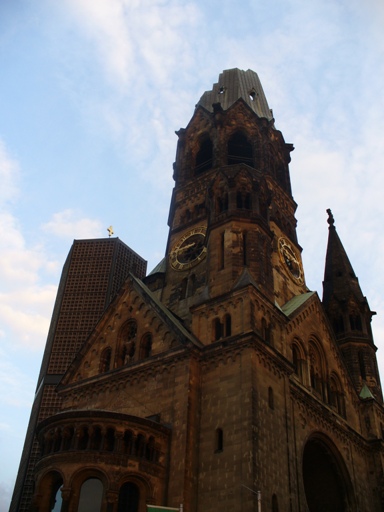 Undaunted, I split with the rest of the group and decided to go see the Kaiser Wilhelm Memorial Church, which was hit with an unexploded shell during World War II and left that way. A new church was built next to it. Honestly, this is just an incredible sight in the middle of a busy city square across from a Chinese restaurant, and I would definitely recommend checking it out on your way into or out of Berlin, if nothing else. 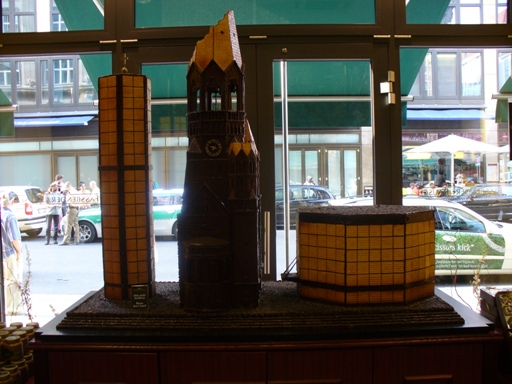 Previously, I only seen it modeled in chocolate.

I sat down and watched the last match amid lots of international food stands by the church, which seemed kind of strangely appropriate. After the game, I went to go get a picture of a broken chains statue that I saw on a postcard. You can normally get a great picture with both . 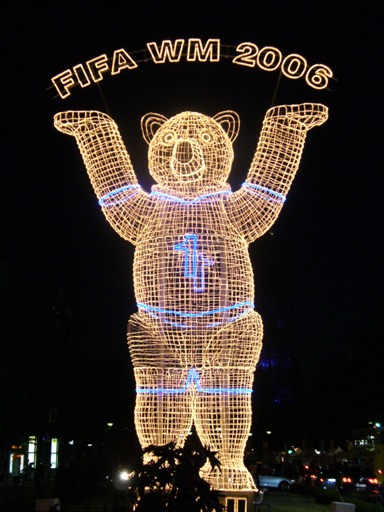 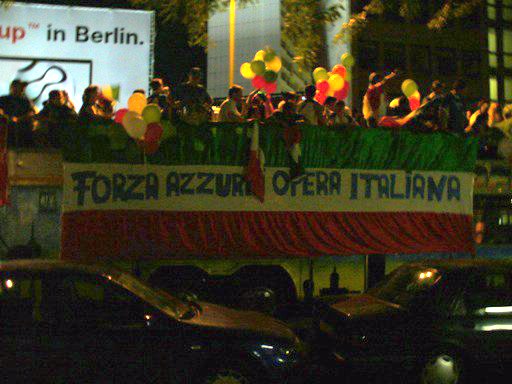 If you got this far, you get a gold star in reading comprehension.