Hit in the Face: A Snively GuestBlog by Laura N. '09

After a lot of searching, I’ve discovered a video on YouTube that is pretty much the perfect metaphor for what MIT has been like for me thus far.

It starts out really exciting! You get accepted, everybody cheers for you, and then they give you all sorts of free stuff as they prepare you for what’s to come. Then, before you know it, blasted in the face by the world’s largest fire hose . . . ever . . . in the world . . . /universe.

Hello, my name is Snively, and I’m about to get hit in the face with a fire hose.

As you may have read, I was selected to be an admissions blogger, but I have to wait for either Laura, Evan, or Jess to move out of Burton Conner. Recognizing my desire to blog a bit before then, Laura rushed to help by giving me a chance to guest blog for her, which is what you’re reading now.

I got to MIT on August 19th and have been living it up! Of all the food I’ve been eating, 78% has been free. Of all the t-shirts I have, 50% were free. That’s not to mention the 2 water bottles, 2 backpacks, 2 rubber ducks, 2 cacti, 2 spiral bound notebooks, paintballing, six flags, seat cushion, and a lot of pens. Unfortunately, there’s an end to all the free, and I think I’m approaching that end. Today there was no free food and there were no free shirts. Instead, there was a realization: This is all about get really hard really fast. I consolidated all of my important due dates for projects next week (the second full week of school) and this is what it looks like:

This also doesn’t take into account that my UROP starts tomorrow and I have pistol every night from 5 to 7. OK, YOU READY?! OPEN WIDE! 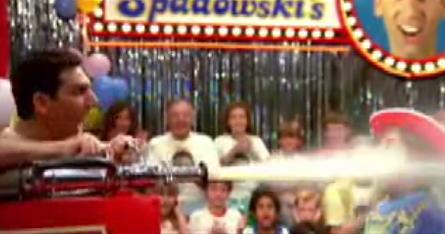 So, like any good MIT student, I’ve decided to punt all this work as far away from now as possible.

(As you may or may not have realized by now, I’m going to make this entry as long as I necessary because it may be the only chance I get to blog for MIT until junior year)

Now, the question stands, what does one do while punting? Well, just for future reference all you prospective class of 2012 freshmen, here’s what I’ve been doing whilst avoiding homework: 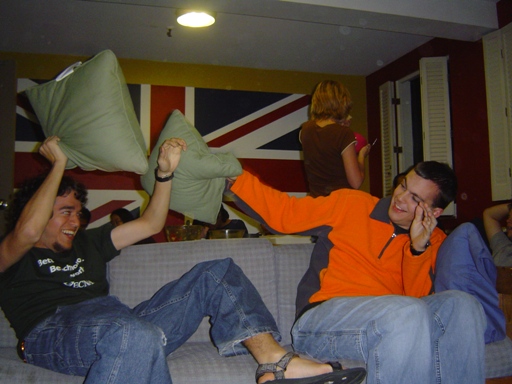 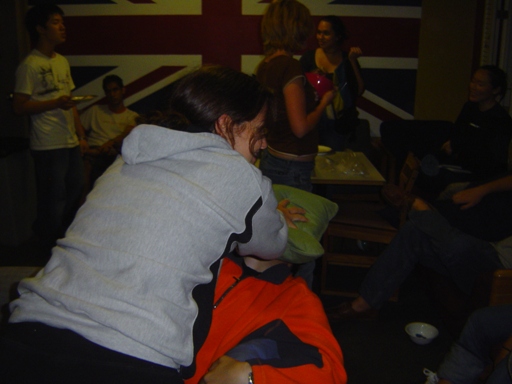 Punting is an art ladies and gentlemen, and I’m proud to admit that it’s not an art I’ve yet mastered, but I’m making progress by leaps and bounds. Hopefully by the end of these four year I will have found a way to not only invent some humanity-saving wonder-[noun], but I will have also enjoyed my time doing it. MIT is about having fun, I still hold true to that, despite my ridiculous week coming up.

To wrap things up, I’d like to have a contest to win one of two completely useless bits of MIT memorabilia. The first is known as an “Athena Header Sheet,” which is printed along with every job you print from an MIT computer. It has my name on it and some graph paper, as well as a nifty logo containing an owl. 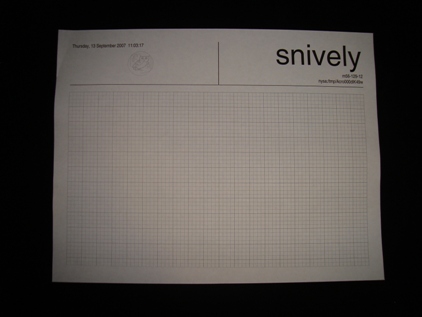 This goes to whomever gets first post (make sure you put your e-mail address in the “e-mail” field when leaving your comment so I can get a hold of you).

The next useless bit of MIT memorabilia is a poster drawn by Laura that my roommate and I rescued from an inevitable death-by-trashcan. It depicts an insane freshman and is signed by the author, with a personal message reading “To Snively – Don’t let this be you!” 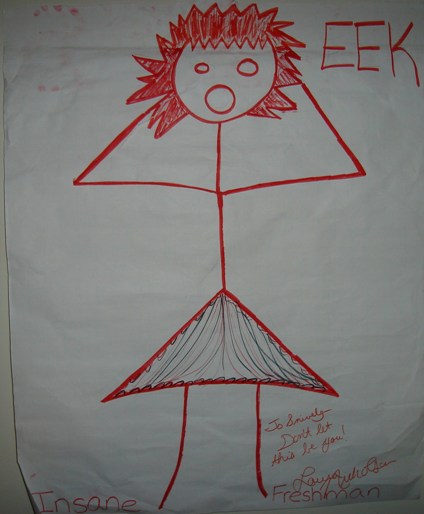 This goes to whoever can most accurately guess the total cost of my text books, all 6 of them.

38 responses to “Hit in the Face: A Snively GuestBlog”