New England hath no flurries like a winter storm

West Coast-ers and international students take note: when it snows in Massachusetts, the precipitation comes down in shovelfuls.

Now if you’re like some of my friends from warmer climes, you may consider scarcely one centimeter of precipitation – enough to finely coat the Earth’s surface with a negligible amount of snow – to be a shocking amount. And that’s understandable; I know a few friends who have never seen snow in such amounts, let alone at all.

Your first adjustment, then, will be to prepare for the weather. To get us started, let’s go over some important terms:

With those essential definitions covered, you’re well on your way to knowing how to survive some crazy snow conditions here in Cambridge. The good news is there’s not much that you can mess up, as far as preparation goes. Packing warm clothes, remembering to bring your boots (and perhaps long socks), and not standing outside while dressed for tropical weather all goes a long way.

On top of that, the rooms – at least at Next House – each have a thermostat. Hypothermia isn’t an issue.

A more realistic threat is that of having nothing to do. This could be because you find there’s more snow than you know what to do with, or because you’ve actually been snowed in. And, perhaps more significantly, you’ll also need things to eat. My suggestion: stock up before the storm arrives, and pray that the internet doesn’t give out. How else, after all, could you access Facebook, Twitter, Reddit, and MIT Admissions?

I can personally withstand a snow-induced catastrophe for at least five days, thanks to the fact that I have the first six seasons of House on DVD, and enough Easy Mac and Poptarts to use as food. To play it safe, though, I’m also rationing an extra large Domino’s Pizza: 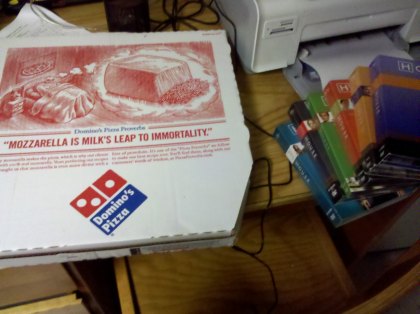 A bit of my survival kit.Feel free to substitute your favorite boxed set of TV shows for House. For thriftier students, Hulu and Youtube also work in a pinch.

If you’d rather go outside, the snow offers oodles of inexpensive fun. In this case, though, they’re predicting a whopping 18 inches of snow. That’s one and a half feet, or roughly half a meter, for those on the metric system. So for example, a snowball fight, given this amount of snow, could easily turn into trench warfare – and that’s a scenario I may end up investigating.

Assuming you’re not one of numerous students taking for-credit courses over IAP, you can also spend your time on some very productive things. So far, I’ve been constantly editing my résumé, hoping that it’ll have the right amount of polish when I go looking for internships for the summer (and certain UROPs for the Spring). I’ve also been on OpenCourseWare from time to time in an attempt to learn a few basics about 8.02 and 5.12 before those classes start.

There’s also plenty of not-for-credit offerings that usually amount to single sessions, making for a reasonably small time commitment. They run the gamut from career-oriented workshops (like an introduction to networking, or a lecture on business and medicine) to stimulating lectures (like a few on the neuropsychology of music).

I had three that I planned on attending tomorrow, but two were postponed due to the weather. The third, which takes place in the early afternoon, is presumably still on, so I may have quite an adventure tomorrow…

Check back here over the next 36 hours or so for updates on the Nor’easter! Pictures will be included to give you an idea of the snowfall.

To give you an idea, this is what Cambridge looked like at around 3 in the morning: 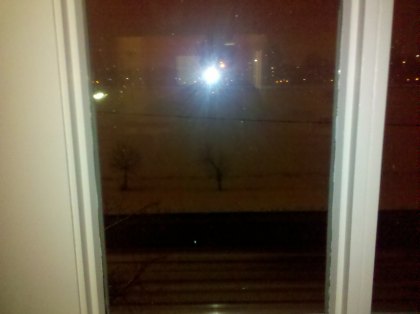 Well, this couldn’t possibly be bad!And this is another picture from roughly that same angle, taken just around now: 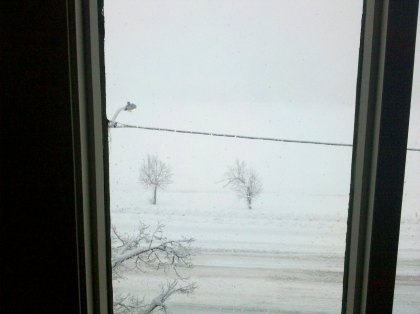 Snow. My. God.There is no more skyline. Everything has been consumed by a blanket of white, and there’s no hope of it changing any time soon.

Here’s another view from outside my window, which usually overlooks the Charles and thus has a view of some of the Boston skyline: 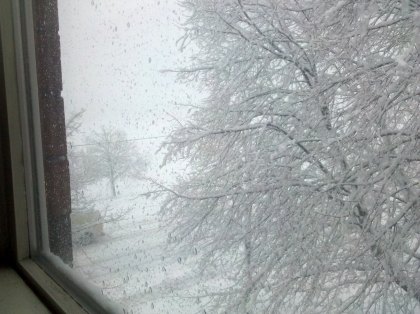 Skyline? Now? Haaaaa. The Institvte laughs at your petty expectations.Thankfully, it’s a snow day today for all non-essential employees (and for my hometown!), so I think that also means that my demo in the afternoon has been cancelled? In any case, if any of you think the snow has ceased, the winter storm warning isn’t set to expire until much later in the day. In the immortal words of Bachman-Turner Overdrive: “You ain’t seen nothin’ yet.”

12 responses to “How to Survive a Nor’easter”