i'm a hass boi this semester

last thursday night was pretty stressful, trying to finish the operating systems lab with the precious few late hours left that i’d had — i’d even started the lab early this semester, even gone to office hours.

it wasn’t enough, which is, unfortunately, a common occurrence at MIT. i’d done perhaps 70% of the lab at this point, but due to the way this lab was graded, i was still passing 0% of the tests. i needed to sleep, and i had an essay i’d barely started that was due at 5pm. my friend casey was coming to boston tomorrow for the long weekend.

i felt truly hopeless in the academic sense. it was a frustration that was inevitable, concentrating itself inside the depths of my heart, slowly growing as the night went on until i snapped, slammed my laptop shut, and went to bed, emotionally spent.

the long weekend was the best part of the semester so far. it did wonders for my mood, and it was a chance to de-stress. i decided to put nothing on my gcal. i spent most of it with casey, but also with others — social circles collided to produce strange venn diagrams. it was a mix of places both new and familiar — the mfa, chinatown, boston commons, the north side, udon at yume, the kero kero bonito concert.⁠01 THIS WAS SO GODDAMN GOOD. you don't usually think of kkb songs as being high energy, but both kkb and the crowd were hype. 10/10 would hear 90% of the venue shout along to flamingo again.

near the start of the long weekend, i asked myself what i really wanted out of taking operating systems. by tuesday, i knew i wanted to drop it,⁠02 well, switch it to listener, which is functionally the same and so i did. another one bites the dust, my friend jynnie told me — i’m the third senior on our hall to drop OS this semester.

so now, i’m taking four hass classes⁠03 i'll probably elaborate on them in a future post and no technicals, which has honestly been amazing. content-wise, this has been the best semester at MIT. if i could do MIT over again, i think i would have been a hass major and a 6-3 minor (but i still would have done software).

i’m going to london this weekend! :3⁠04 part 1 of 2 for traveling this semester it was initially planned on a whim with jynnie, but a bunch of 2E alums are coming as well! i’ve never been to the UK — i’ll try to take lots of pictures. even though i’ll be a little pressed for time for my classes next week, i’m hoping this trip will be worth it~ 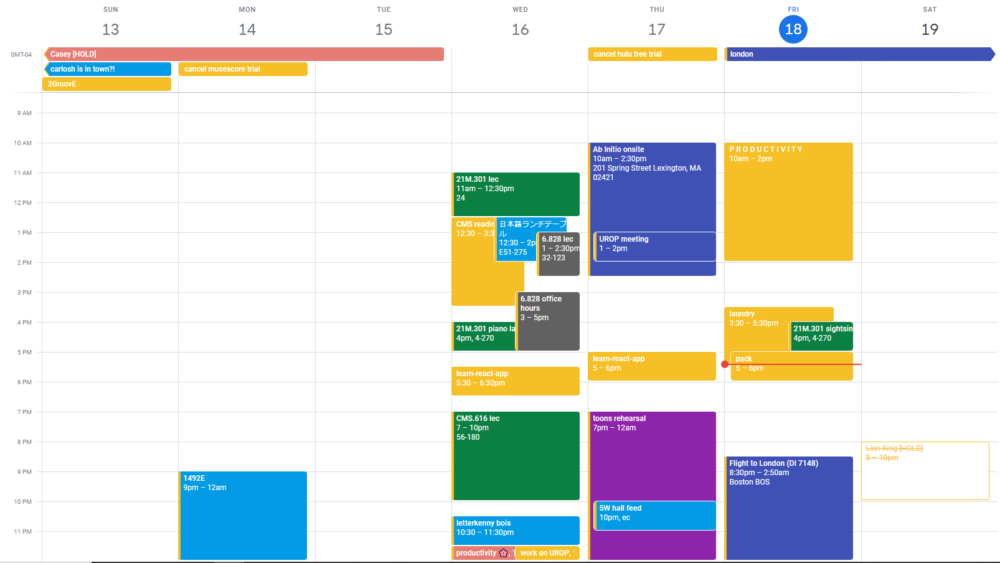