Do you like your toast with tears? Because I'm sad.

DID YOU KNOW? The state of Arizona does not celebrate daylight savings time.

Okay, so it’s been like a month. I don’t know what happened, dawg. I don’t even have some great, 1,000-googol-page-long entry saved up for you. Actually this entry did end up being kind of long, but it’s not quite 1,000 googol pages.

All I can offer you by way of reconciliation is this song.

But apart from listening to that song, I am a sad sad toaster made of glass this term. I’m leaving MIT! It’s totally sad. I just walk around and I’m like, “Oh no! It’s the last time ever I’m going to forget to go to the Concert in Bad Taste. Or go on the Burton-Conner boat cruise. Or see a movie for $3 at LSC. Or bring up singularities in everyday conversation. Or something like that.” And then I get real sad, so I go back to my room, lock the door, and play NES on my laptop.

But last week I was truly, truly inconsolable about something completely unexpected: last Friday I turned in my last problem set ever at MIT.

So the other day I was bored because I woke up and had like three hours before class when I didn’t plan anything to do, so after playing Crystalis for two hours, I decided to make a graph of the number of credit-hours of class I’ve taken per term since coming to MIT. The results were intriguing: 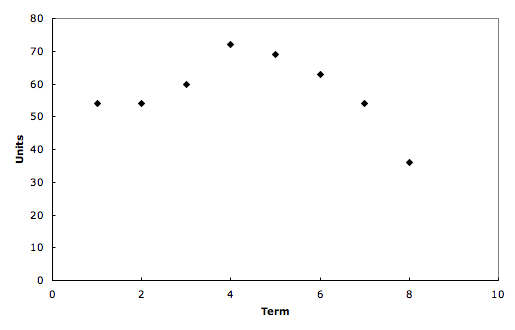 Don’t you love all those excellent chart-formatting skills I learned in 10.26: Chemical Engineering Project Laboratory? Really, I didn’t use them as much as Steph ’07, who made the ten thousand different meticulously labeled graphs demanded by Professor Preetinder S. Virk. But I digress. As any good engineer would, I decided to use these results to predict the number of units I would be taking next term at MIT. So, I added a trendline in the form of a fifth-degree polynomial, because it’s well-known that work varies as the fifth power of time. And whatnot. 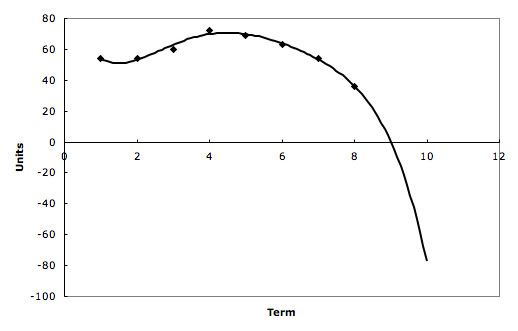 Perfect! Empirical data agrees with my model. I will indeed be taking zero units at MIT next term, since I’m headed to UC Berkeley for grad school. Of course, the data also predicts that I’ll be taking negative 80 units the term after that, which should be AWESOME. What I expect to happen is that MIT will invent time travel, and then JKim will steal it using her ninja skills. So then she’ll come get me at Berkeley, and after going back in time and preventing the Spanish Civil War, we’ll come back to MIT and relive my entire MIT experienceexcept at night I’ll go back to Berkeley and do my problem sets. So the time that I spend at MIT, which will add up to 80 hours per week of real world time, will actually count as NEGATIVE TIME. SEE WHAT STATISTICS CAN DO FOR YOU?

But this entry was about problem sets at one point. Problem sets. And zombies. Zombies and toasters. And water. And friendship. And the whole world.

I think the point was that I’m taking so few units this term, and so I really don’t have any problem sets! Ever. Like, ever. Well, I had a total of ten problem sets this term. I know people who have ten problem sets a week! But they have serious problems, no fun, and NO-DOZ addictions that they proudly chronicle on their blogs, and they also confuse the concepts of work, education, and happiness.

But in my busiest term, I had four problem sets per week, three of which were due on Friday. That was the term that I basically pulled an all-nighter every Thursday and watched more old episodes of Captain Planet (5 AM weekdays on UPN!) than I probably watched when Captain Planet was in its first run. Two terms ago, even though I only had three problem set classes, one of those had problem sets that were routinely 20 or more pages long. One time Megan ’08 woke me up on the floor of her suite. She was all, “Sam, you passed out on the floor [and you’re sprawled out amidst three notebooks and hugging your laptop, which is still on, so it doesn’t get stolen; also, you don’t even live here].” And I was all, “So?” And then I went back to sleep. On the floor. Because I had to go to German in 40 minutes, and there was no way I’d ever get up again if I went to bed.

And yet I was still writing all these blog entries back then! Like, three or four every week! And training for a marathon! What was I, Superdude?

Seriously, the most productive thing I did today was beat Crystalis.

So I just went on about problem sets for like three paragraphs, and how stressed out I was. And the point is that I’m going to miss this, because problem set sessions are like the single quintessential MIT social experience that every single undergrad has. You’re up late at night and working on some heat and mass transfer in the floor lounge, canceling terms out of the Navier-Stokes equation, while the girl next to you does quantum physics and somebody else is writing his final philosophy paper, and every so often this freshman, who’s using MATLAB to model differential equations, opens up some random YouTube video or something, so you watch an exploding whale on a Welsh beach, or he plays “Don’t Stop Me Now” by Queen and everyone knows all the words and sings along. And one by one everybody finishes or gives up and heads off to bed, giving you a sympathetic “good night”, until it’s 3:30 AM and it’s just you and the Navier-Stokes equation, and you wish that you had started earlier, and contemplate whether it’s even feasible e-mail the TA, or if you should start on your circuits problem set, or whether you should just worry about that later, and then you don’t remember what happened next but somehow the sun is rising and you’re looking at the entry for “Since U Been Gone” on Wikipedia.

So that happens like once a week, every single week, for your first three and a half years at MIT.

And so Thursday night I actually had two problem sets to do, but they only grade 5 out of 6 problem sets in 10.494: ICE-T3 and the professor was basically like, “Hey, seniors, why don’t you just skip one of the last two problem sets!” I was going to do both, but it was like 10 PM. So I did what was probably the shortest problem set I’ve ever done at MIT, trudging my way through some possibly-working MATLAB code and four pages of differential equations in about two hours.

And I was just sitting there in my suite lounge, looking at the last problem set that I ever turned in at MIT. Ever! The last one! Who would have thought, four years ago when I first Mastered Physics, that I would get to the last problem set that I would ever turn in at MIT. And I looked at what a shoddy job I did with it. But seriously, it was like 12 AM, and I was going to get a B in the class no matter how well I did on it. I really couldn’t motivate myself to look at the theoretical implications of three-phase mass transfer in a continuously stirred tank reactor any longer. Somehow this term I really lost something.

So I did the next best thing: I wandered across the floor to the 213 suite, where Laura ’09, Dizzle ’09, and Richard ’09 were working on their problem sets, which they actually cared about because they’re sophomores. So I parked myself on their couch and fell asleep to the sweet sounds of their melodious voices discussing transfer functions and rigidity and Hamiltonians, dreaming about a time when I could have joined them for one of the greatest all-night tools of all time.

This entry probably scares you, doesn’t it? TOO BAD, YOU ALREADY MATRICULATED AT MIT, SUCKA!

43 responses to “I am a sad sad toaster made of glass.”