Unfortunately, usually somebody just blew up their spaghetti-o's.

DID YOU KNOW? The word meaning “the closest approach of an orbiting body to Mars” is “periareion.”

My dorm, Burton-Conner, is the best. Even though we haven’t meaningfully updated our web page in two and a half years, we’re still the best. Why? Kitchen space. As Laura showed you, each floor is arranged into suites of 4-10 people each. This means that for a modest reduction in room size, every 6 people in the dorm get a full kitchen–sink, cabinets, two refrigerators, stove, and oven. No lugging a Target refrigerator from Omaha, NE in the back of your parents’ minivan.

It also means that we have the highest per-capita average of fire alarms of any dorm on the MIT campus. Because just because you go to MIT doesn’t mean you know that you should take the wrapper off of a microwave burrito, or that you shouldn’t put pita chips in the oven and then forget about them. Not that it’s necessarily a bad thing–I never would have met the former second-best Goldeneye player in the world if it weren’t for a random fire alarm at Burton-Conner. (I WAS SO EXCITED)

Long long ago, I heard something, maybe on these blogs, about the culture of a dorm being somehow determined by its physical structure. I think Burton-Conner’s culture is pretty much defined by fire alarms. Yeah, fire alarms and that’s it. It’s rare for any freshman to live in Burton-Conner for more than two weeks without hearing exactly how to prevent a catastrophe: “Close the door when you’re cooking and open the windows. The suite alarm can go off for three minutes before the dorm alarm kicks in and everyone needs to evacuate. If something’s on fire, cover it or throw it out the window!” Actually, it’s rare for any freshman to live in Burton-Conner for two weeks without having a fire alarm go off. Just because it’s 3 AM, or 12 degrees outside, or the night before the Boston Marathon, doesn’t mean that someone knows how to cook a pepperoni ‘n’ cheese Hot Pocket. People usually take the minute before the fire department gets there to put on their finest attire and grab some playing cards or a snack. Then later w reminisce about how much fun we had playing hearts or secret card or whatever at a particular fire alarm, and how cold it was. I know 3 sets of people whose facebook friendship status is “They met randomly: Burton-Conner Fire Alarm!” I even wrote lyrics to the ringing alarm.

Basically, if Burton-Conner ever actually burns down, we’re all pretty much doomed. But doomed awesomely.

And since it’s better to show, not tell, I grabbed my camera last night. You might think it’s stupid for me to just show 15 pictures of my ridiculously attractive friends standing outside a non-burning building, but let’s see what kind of blog entries you come up with when someone wakes you up at 3 AM. 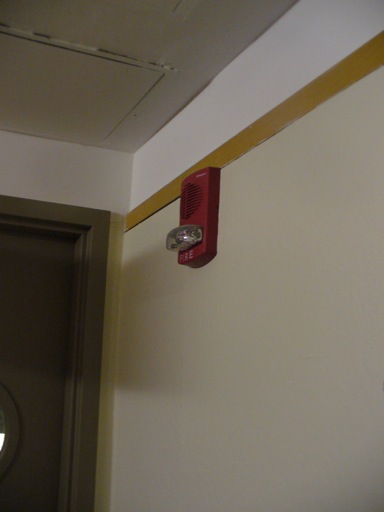 Oh no! A fire! You better ring the alarm! 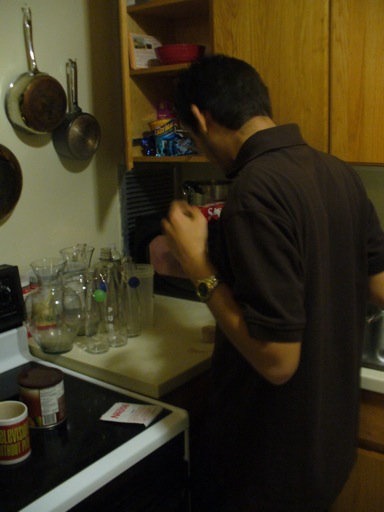 Unfazed, Gabe ’08 makes his traditional mug of hot cocoa for the road. The only two exceptions were the time that he set it off while insouciantly frying a hamburger and the time that he was in the middle of a boss battle in Zelda: Twilight Princess, so he locked the lounge door and hid under a couch so the firemen wouldn’t reprimand him. 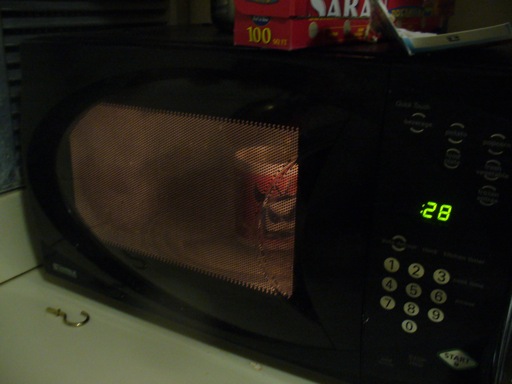 Well, I can do that too. I got a little worried that the fire department was going to find us there and yell at us (they have threatened to make everyone sleep outside after finding someone hiding under his covers hoping that the torturous noise would finally end), but Gabe assured me, “no, I do this EVERY TIME.” 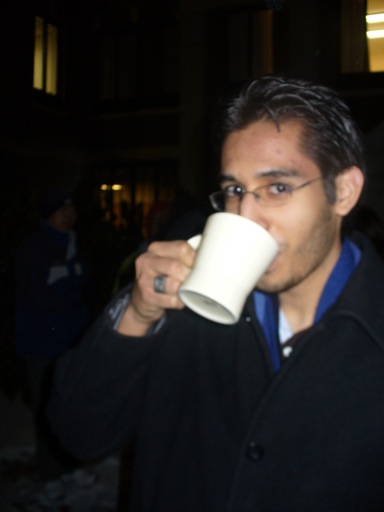 As you can see, Gabe does look pretty rowdy drinking his cocoa, doesn’t he? It’s a tradition. 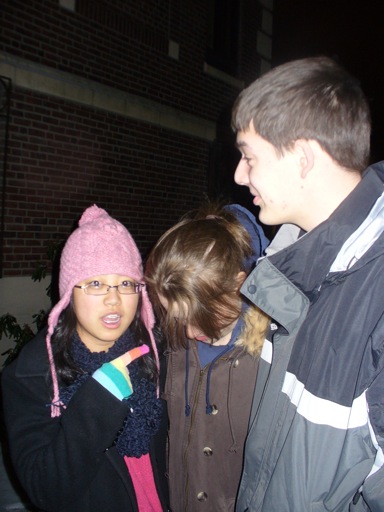 Sung ’10 has an adorable hat and is saying something, probably, “It’s Lauren ’10’s birthday and there’s a fire alarm!” Because everybody at MIT talks like that and says people’s class year right after their name. We really do talk in numbers here. Richard ’09 sympathizes. 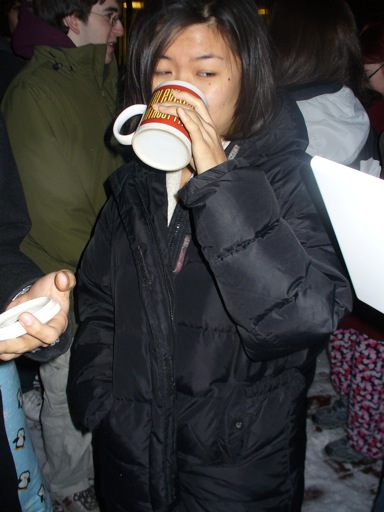 When Ling ’07 saw that I was taking pictures, I think she said something like, “You should take one of me because I’m not wearing any pants.” Trust me. Or you could ask Evan ’10 in the background. Anyway, I gave her some cocoa to thank her for this awesome pose. 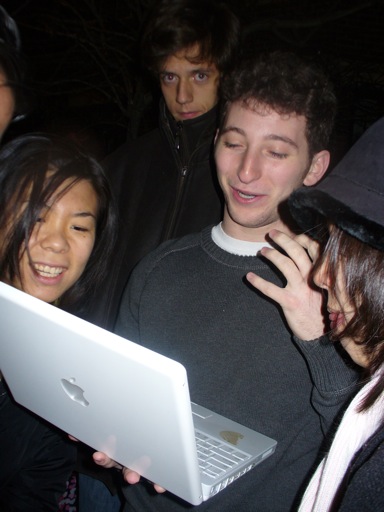 Jeremy ’09 brought his Mac outside so people could watch House. Everyone was entranced, except David ’09 who apparently likes me better than Hugh Laurie. 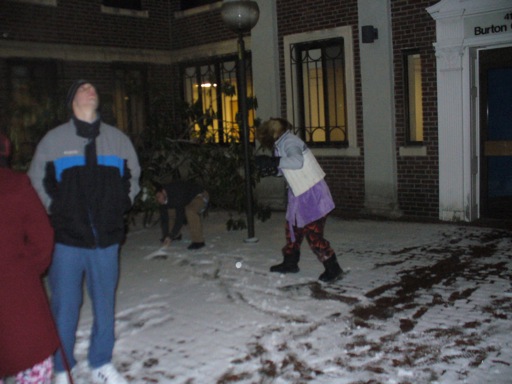 Neither the late hour nor House nor the fact that it only snowed, like, one centimeter could stop Jeremy from throwing snowballs at his girlfriend Alice ’09. Oh, kids. 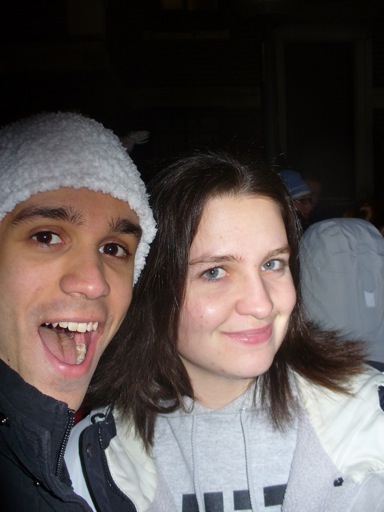 I don’t think I really said that last thing, but in my head I did. In my head I’m also six foot one.

Then I just started taking some portraits, which turned out surprisingly decent considering it was 3 AM. E-mail me if you want any names or phone numbers! 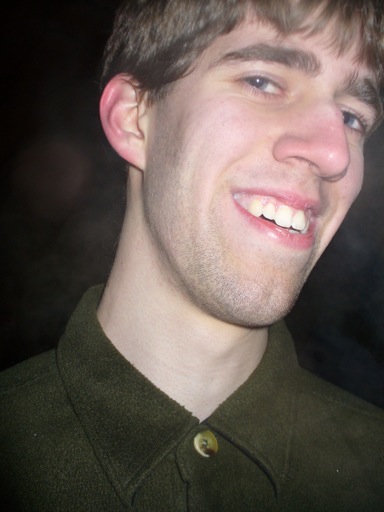 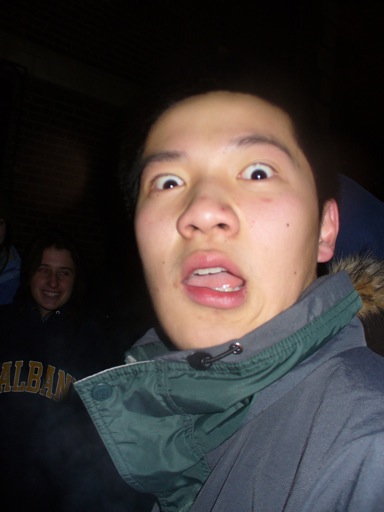 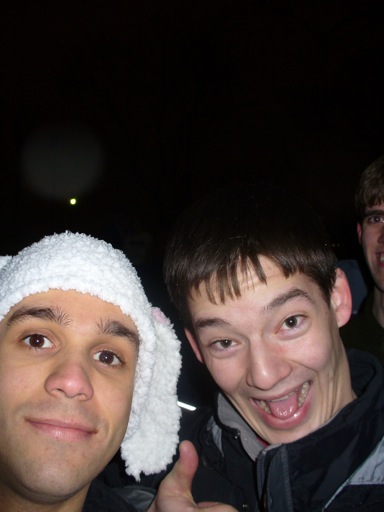 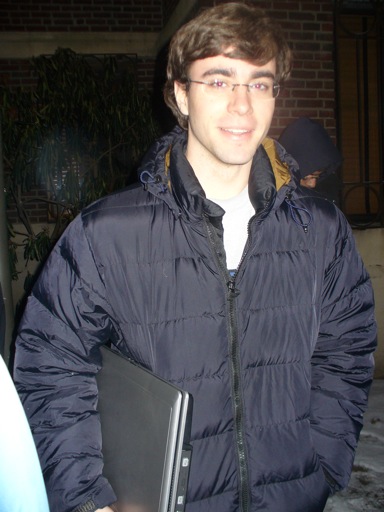 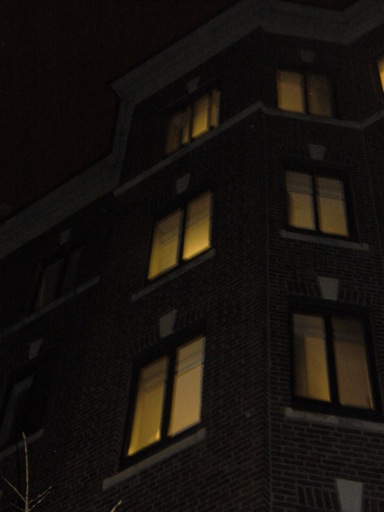 I didn’t really capture it well here, but there was actually a few puffs of smoke trickling out of the second-from-top floor window, which is much closer to an actual fire than most of our alarms are. It also meant that we had to stay outside for an extra 10 minutes while the air cleared. 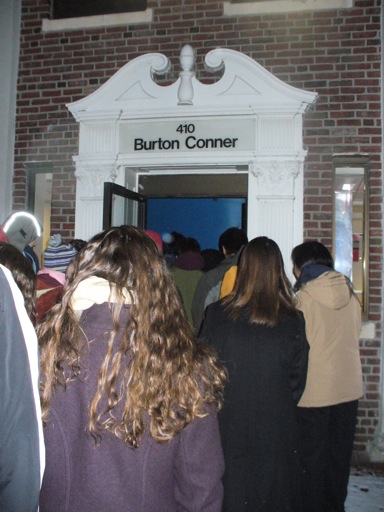 But the end of the alarm has come often, and continues to often come. We headed back inside to beds or Wiis and decided that we would do this again sometime. Probably sooner than we want.

THIS IS THE REAL MIT!