Read on, my children, and you shall see of our midnight ride to IHOP.

“If it weren’t for my horse, I never would have spent that year in college.” –New England proverb

A prize goes to the first person to identify the source of this wisdom.

Ruth, you’re not allowed to play.

I know you just said iHop sucks, but do you wanna bike there
after 3-6-0?
Matt and Jose are going. We can invent a dance that trumps Kel
Mitchell.

everything I do is based on blog entry potential.

That’s why I invited you. Midnight bike ride to iHop with people you know from all branches of MIT. Jose is course 6. And they have new funnel cakes. Waaaaay better than 6 month old funnel cakes. 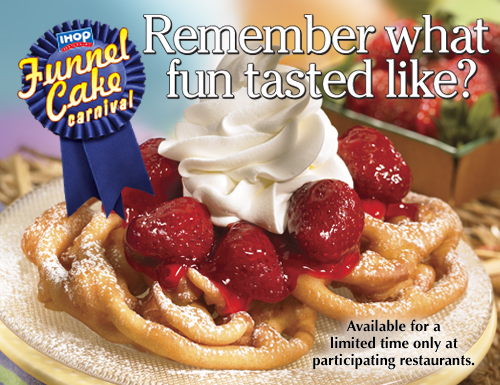 I’m not usually the kind of person who wonders what fun tastes like, but after tonight, I’ll never forget.

I still think that the International House of Pancakes kind of sucks, in theory… it’s relatively far from campus, the food is unspectacular, and the prices are fairly high for the portions. Still, how can I resist the prospect of a random three-mile midnight bike ride down Comm Ave? How can I resist new funnel cakes?

IHOP, much like life itself, is about the journey, not the destination.

After watching a girl named Thugg Angel take it all on Dance 360’s “ladies’ night,” I grabbed my bike and headed into the clear Boston night with Jose ’07, Matt ’08, and Ruth ’07. It’s a little surreal to see Kenmore Square, Boston’s most infamous 7-way stop, with no traffic and the only sign of life being a few BU students in various stages of inebriation. We basically had the streets to ourselves, and since bicyclists already have the disctinction of being both motorists and pedestrians (see entry title), we weren’t bound by the usual traffic formalities of lanes, speed limits, and red lights. It was even kind of beautiful, in a post-apocalyptic way, until Matt crashed and set off a car alarm.

Now, you have to understand this: my philosophy of photography, as well as taking classes, choosing a major, cooking, and essentially everything in life is that if you throw enough spaghetti against a wall, eventually some of it will stick. So, out of 57 pictures I took on the way to IHOP, here are the six good ones: 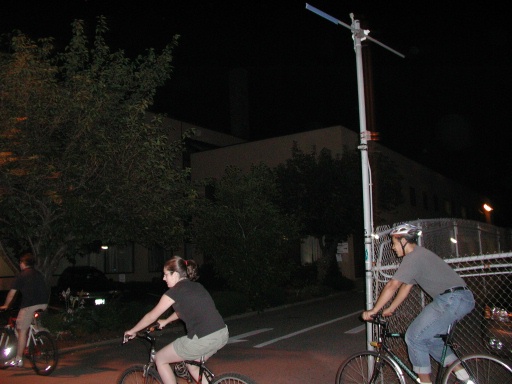 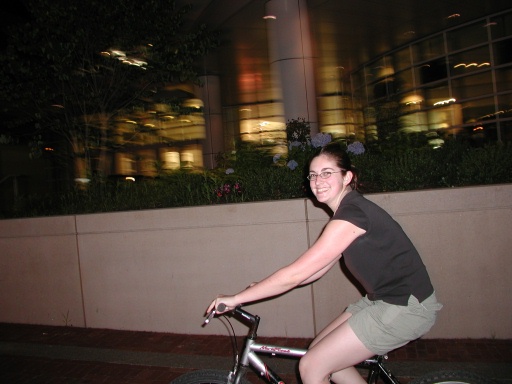 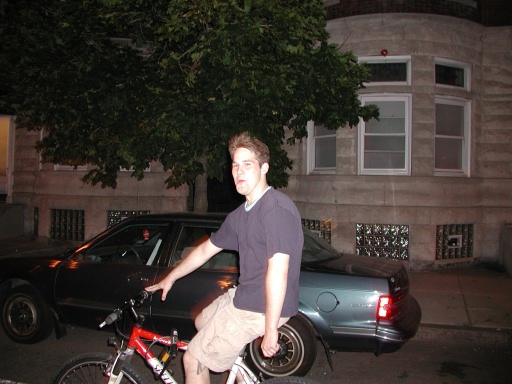 This picture is not related to Matt’s crashing into a parked car. Also, I think his chin is smaller in real life. 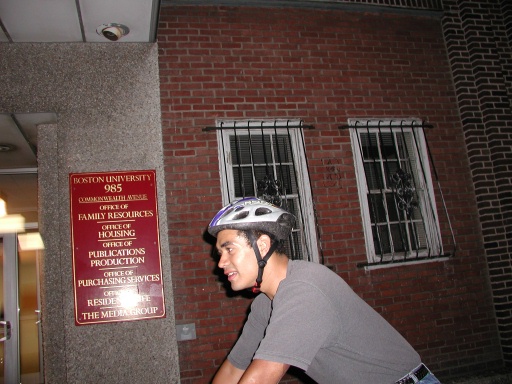 Jose ’07 (Course VI: EECS) rides past the BU Office of Housing. Jose is an awesomely hardcore cyclist; he’s spending the rest of the summer bicycling along the entire West Coast of the United States (1700 miles). And I complain about 120. He can also open his mouth surprisingly wide (photograph upon request). 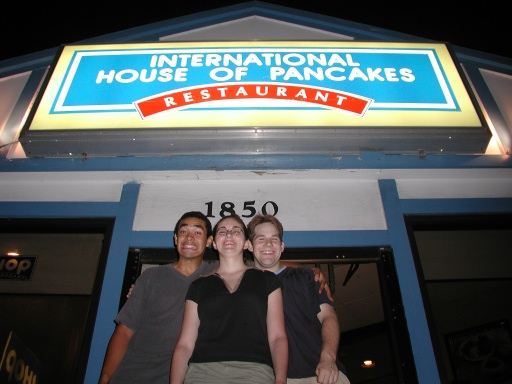 “I feel that it’s a very underutilized angle for pictures.” –Ruth.
I actually wanted to be in this picture too but I couldn’t find anyone passing by who would lay down in the parking lot with their head in oncoming traffic to get the desired perspective. 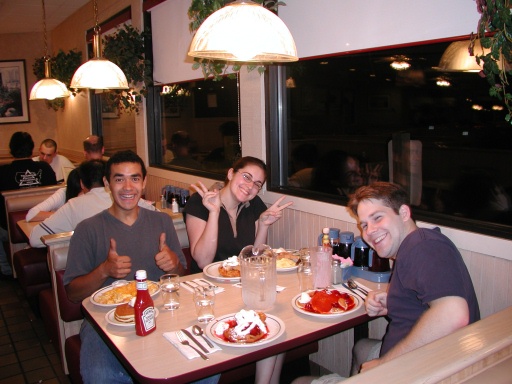 The reward–four-star gourmet funnel cakes.
“They have a smaller diameter than fried dough, so the ratio of frying to food is much higher.” –Jose

If you happen to be in the Boston area this summer, I would highly suggest watching Dance 360, America’s hottest dance show. It’s hosted by Kel (you know, from “Kenan & Kel”) and beyond that, pretty much defies description. Weekdays at Midnight on UPN (MIT Cable Channel 30). Hey, come on over to Burton-Conner sometime, we usually have about 7 people watching on any given night. Just send me an e-mail with the subject line “360” or something. I’m down with that.

Oh, I think I’ll have to write another entry on the 3-6-0 sometime. You deserve it, K-Sly.

4 responses to “I’m a pedestrian! I’m a motorist! Pedestrian! Motorist!”