No, I was not abducted by aliens. I was abducted by field hockey, which currently owns my life. And I apologize for that. But I’m back, and now that my schedule is really wacky, I’ll be updating more often! (I have classes in the morning and afternoons, often with breaks over 2 hours in between. It makes for a nice lunch/blog update time.)

Today is the first day of classes, but before I get into that, we have some recapping to do. This is the most awesome picture I took this summer (the bag was part of the packaging of my brand new awesome laptop): 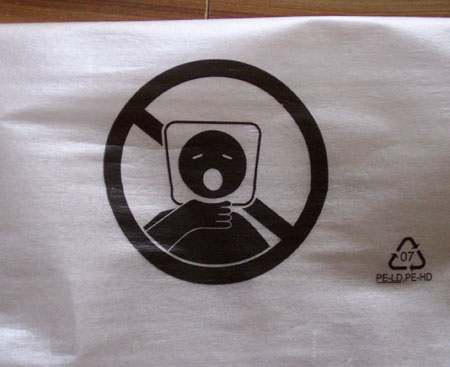 OK, I find that image hilarious. Maybe it’s just me.

My parents drove me up here with all my stuff and were staying at the Hotel at MIT, which is oddly connected to Star Market, where most MIT students buy their groceries if they’re so inclined. So my parents said, “Hey, while we’re here, why don’t you come grocery shopping? That way you can buy lots of big, bulky things and we can drive you back to your dorm with them. Oh, and we’ll pay for it.” This was too much to pass up. After dragging my many possessions into my (awesome) new room (pictures to come later, when it looks nice enough that I won’t be embarassed posting pictures of it on the Internet), this is what my fridge looked like: 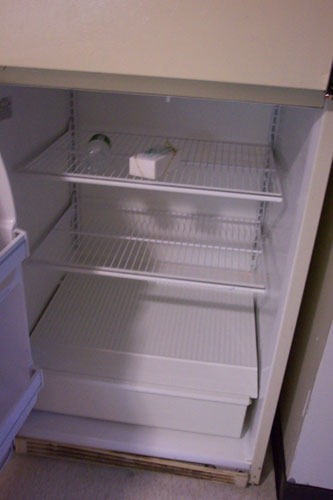 That’s right, its sole contents were a bottle of water and a box of seafoam fudge. Mmmm, the tastes of home. (I love New Jersey, for those of you just tuning in.)

After….a lot of my parent’s money later, I bought all this: 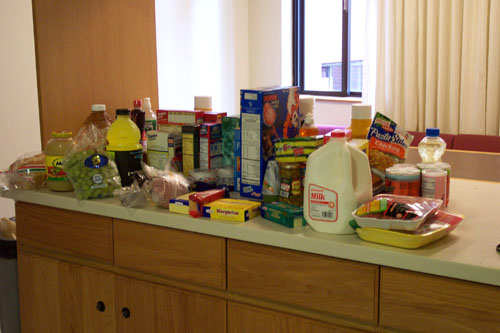 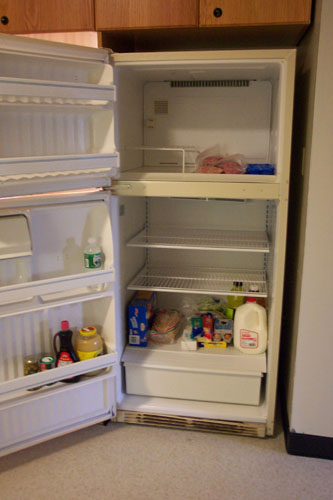 Of course, it was another 4 days or so before I actually unpacked all my pots, pans, and kitchen utensils. Thankfully, the field hockey team has team dinners every night for the first week of practice. Each night, a different class was responsible for preparing something edible for the team to eat. The “Senior Surprise” consisted of homemade baked ziti (quite possibly my favorite dish of all time), the “Junior Jubilee” was pizza (always a classic), and the “Freshman Fiesta” was homemade tacos. (Ambitious freshmen!) One of the members of my class, who shall remain nameless, named our event the “Utter Disappointment.” That was kind of sad, because it doesn’t even have alliteration. We ended up ordering subs, which was not quite as disappointing as advertised.

Then there were lots of fun and exciting Orientation events. I did some Burton-Conner Rex events and worked a couple of shifts on the ambulance as well. Now all the freshmen have been assigned to their permenant rooms, and it’s frat rush week. Which means there are all kinds of parties and free food and events all over the place. Today was the first day of classes, and rush dies down just in time for the weekend, which I will be spending out of state at an overnight field hockey tournament.

Basically, my life is a non-stop party.

Oh! One more thing about Orientation- the coolest event ever is the East vs West waterwar, where residents of either side of campus line up across Kresge Oval and…get each other wet. This is what my feet looked like after waterwar: 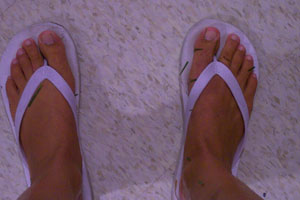 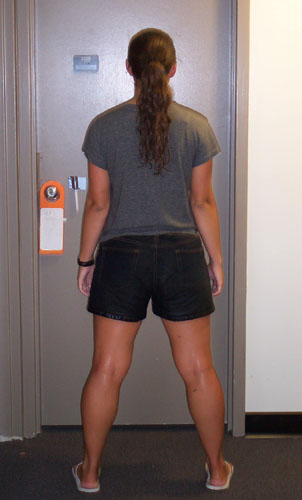 Basically, someone from East Campus had snuck over to our side of the field and was swinging around a black trash bag which was actually filled with water, I believe. People were shouting for us to watch out, so I turned around just in time to duck. I was one of the closest people to this guy. Then someone yelled, “Get him!” So I tackled him. Into a mud puddle.

I don’t know, it seemed like the thing to do at the time. (I look clean, but my clothes were not.)

Anyway, seeing as how today is the first day of classes, I guess it’s a good thing that I finally figured out my schedule. Here’s what I’m taking this semester:
2.001: Mechanics and Materials
2.003: Dynamics and Vibrations
6.081: Special Subject/Introduction to EECS
21M.600: Introduction to Acting

So far I’ve only been to two of them, so I’ll fill you in on the details later. Right now, I want to go make my room look more like a room and less like a storage closet. Because then I can take pictures of it and show them to you. Yay.