In which I am only slightly less boring than usual by Keri G. '10

The title says it all, no?

Any time I have disappeared off the face of the earth – or just from the blogs- it can be blamed on one of two things:

1) The Shift and A keys on my computer’s keyboard have been acting up since January, making it nearly impossible for me to type anything at all ever. Getting around the Shift key is easy enough, as there’s another one on the right side of the keyboard; the A key, however, is another story entirely.

It just took me two minutes to type those sentences. WHY WHY WHY did it have to be those two keys? Couldn’t it have been something trivial, like F12 or that one key up top with the incomprehensible symbol on it? Oh, wait. Incomprehensible Symbol key pulls up the right-click menu. That’s actually pretty cool BUT UNNECESSARY WHY COULDN’T THAT HAVE BROKEN?!

2) My life has been taken over by fill-in-the-blank item of extreme hosage: this summer, it’s being in lab all the time for my UROP and working at the Senior Haus front desk. When I’m not busy dropping and shattering flasks full of buffers I just spent an hour making, I’m sitting in a chair listening to Pandora and pushing the button that opens the front door.

Working desk is a highly eventful job, as the following pictures (taken last Thursday on my 8AM-11AM shift) can attest to: 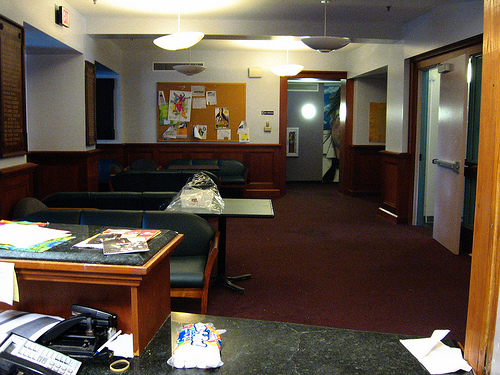 8:30 AM – No one has walked through the lobby at all, probably because they are far more intelligent than I am and are still asleep. There is food at desk, as per usual; more specifically, there’s a bag of giant marshmallows left over from José ’10 and Nick ’10’s Very Special Episode™ of their show on MIT Cable, The Hip Show for Hip Kids. It was on the obesity epidemic in America. It was hilarious. (My A key is sticking again. Maybe I should find a way to finish this post without using it again?) 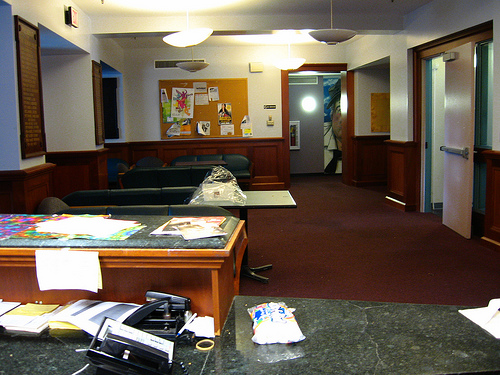 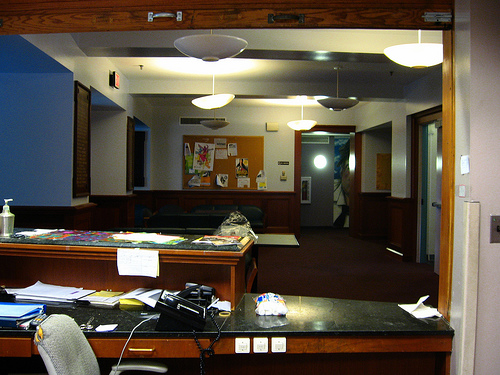 9:30 – Someone took one of the jet-puffed sucrose/corn syrup delicious thingies (KEY JUST STOPPED WORKING MUST COPY/PSTE LETTER WHEN NEEDED GRRRR.) and moved the bag two inches over. 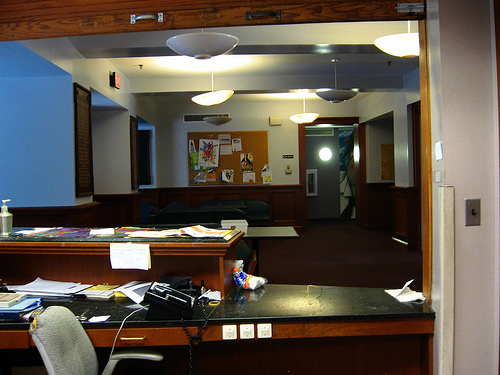 In short, I’ve spent this summer being boring. This week, however, was anything but.

On Monday, I got an email from Becca ’08, who is spending the next year working as a Program Coordinator for the Office of the Arts:

do you want to come to an event with me and a couple other people from the office? we’re going to the mfa for a film (sleepwalking through the mekong) and concert (dengue fever, which is a cambodian pop/psychedelic rock group, with pistolera ) starting at six on wednesday night. we’d leave from the office of the arts (E15-205) around 5:15 or so. it sounds like a lot of fun(http://www.mfa.org/calendar/index.asp?keywords=sleepwalking&category=&collection=&cal_language=&week=&_submit.x=1)

Who would turn that down?

Not me. Never me.

So on Wednesday, Becca, Tarick ’11, Michele Oshima (Director of the Artist-in-Residence Program), and I went to the MFA for the film ( a travelogue of sorts from Dengue Fever’s visit to Cambodia, where they played many covers of Cambodian rock music from the 60s and 70s) and the show, part of their Concerts in the Courtyard series. 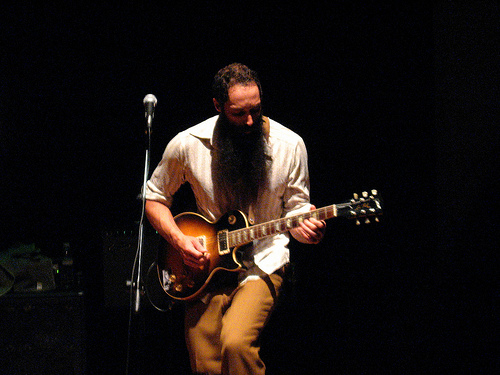 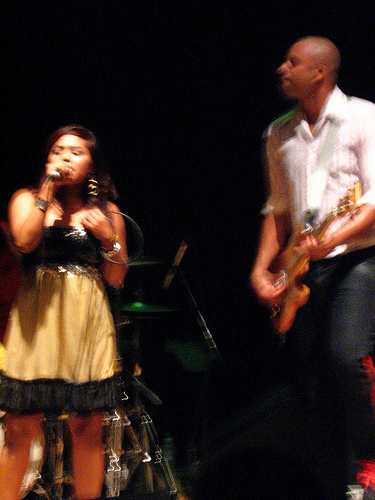 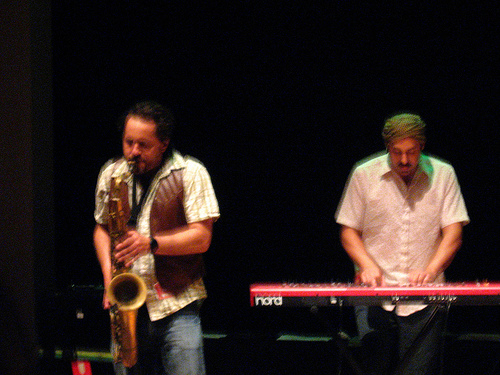 (Blurry pictures make me sad, but no flash photography was allowed and getting thrown out of the show would have made me sadder.)

The show was moved to an auditorium indoors because of a thunderstorm, but that didn’t put a damper on anyone’s excitement.

Get it? Thunderstorm? Damper?… Fine, joke not landed. (MY A KEY IS WORKING AGAIN. FINALLY.)

Anyway, Pistolera was awesome, and Dengue Fever was AMAZING. If you ever get the opportunity to do anything through the Office of the Arts, by all means take it – whether it’s making a movie for Michel Gondry or going to see an amazing band you’ve never heard of before.

And if nothing else, it’ll be a great addition to your week of breaking stuff in lab and eating marshmallows for breakfast.