living a second life as an art student

This summer, during my three-month internship in Seattle,⁠01 which I will describe to you in painful detail in a later post. a group of intern friends and I decided that we were going to visit Vancouver for a weekend. We drove up, crossed the border, stayed at an AirBnB, and spent the weekend doing very typical tourist activities: biking around Stanley Park, eating somewhat decadent brunches, going shopping, so on and so forth.

One of our many stops that weekend was the Richmond Night Market, a local attraction full of Asian food stalls and all of sorts of other small booths selling various trinkets, like jewelry, stuffed animals, so on and so forth. Unfortunately, the market was also cash-only, and we had not brought enough Canadian dollars⁠02 which we consistently referred to as 'fake money' throughout our trip. to finance more than a few small items of food for each of us. I ate some skewers and a piece of taiyaki, others chose their share of snacks, and then, wallets exhausted, we wandered around the area just to sort of take in the ambience. Our group split into two; one group wandered off to look at the trinkets, and the rest of us, left with nothing else to do, ended up standing at the stage, where a Chinese cover band was performing.

Something about this performance stopped me in my tracks, even though the first two songs were sung in Cantonese, a language I cannot understand. It was something about the fact that there were five Chinese people who had just decided to make music together, in this world where such “frivolous” endeavors are often discouraged. 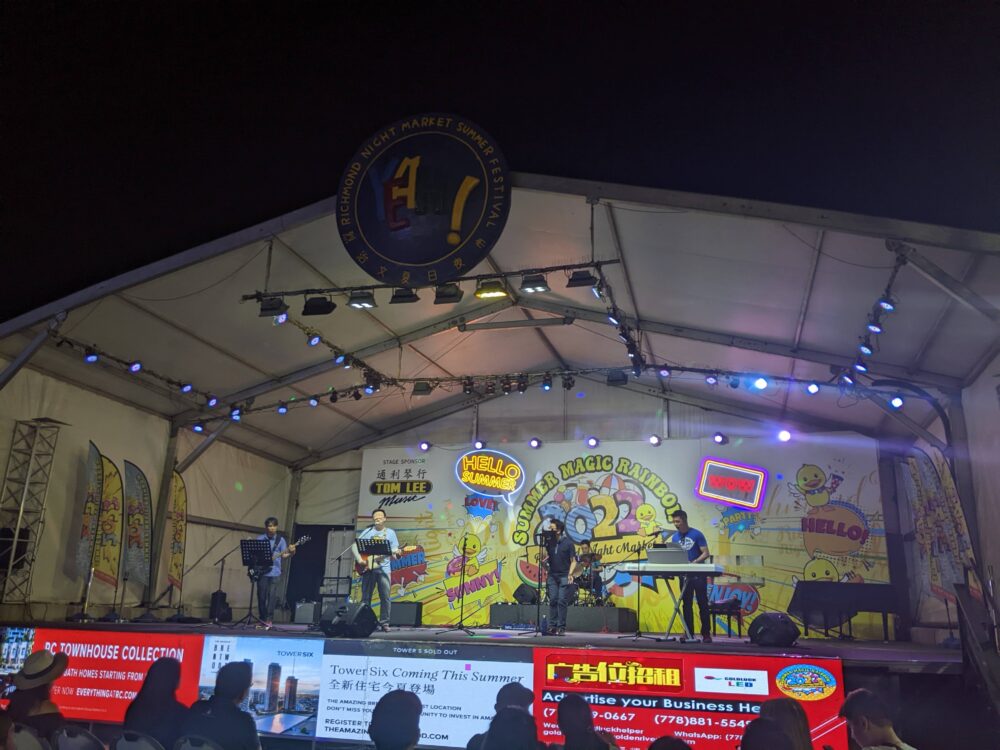 The last song they sang was a song in Mandarin from the 1990s called “特别的爱给特别的你”, commonly translated as “Special Love for Special You”. I had never heard it before, but as the choruses repeated, I began to sing along. When we left, I felt like my heart had been opened anew.

I am once again busier than ever this semester, running between some 73 units⁠03 each unit at MIT is supposed to correspond to about an hour of work a week; because of this, most classes are twelve units or four credit-hours. of classes and meeting after meeting for any one of a variety of activities. I am sleeping and eating well, and yet I am still tired just from the sheer amount of overhead involved in managing all of my daily tasks. I am on the verge of dropping something, but I haven’t done it yet, as some corner of me clings to the idea that I would be better off learning all of this content.

Despite all of this, I get up every Tuesday and Thursday morning around 8:50 AM⁠04 with deep apologies to all the high school students reading this, who have to get up at absurd times. left to my own devices, I would naturally sleep from 2 AM to 10 AM. and scramble to get ready, dashing across campus as quickly as possible to arrive at Chamber Chorus at 9:30. I always arrive slightly late, completely out of breath, and I never really catch my breath for the 1.5 hours of singing, especially since I have the joy and privilege of singing tenor.⁠05 the highest male voice part in a traditional choir. Last week, the clouds were this awful, dreary gray, which seemed to rob the morning further of whatever charms it used to have.

By every account, this class should be a terrible experience, but by the end of every rehearsal, I emerge renewed, ready to face the day ahead of me. There is something transformative about making art in a group, about the way the voices complement each other into something we call music, something that makes one feel so utterly alive. We sing and we sing and it is both extremely technical and completely natural, and we keep going.

Last year, the Chamber Chorus performed an arrangement of Clara Schumann’s “Liebst du um Schönheit” for 21M.011, MIT’s Intro to Western Music class. The piece is lovely and yet utterly tranquil, and afterwards, the professor of the class asked us “how do you get into the calm headspace for music outside of the insanity of MIT?” One-by-one, the choir members answered that music is exactly the escape which brings us into that calm headspace. It is the way we free ourselves from the overwhelming nature of our day-to-day lives.

Yet, when the winds blew against you, you were powerless to stop them. If she was a piercing gust of air, cold and calculating, ready to cut through you with just a few words, then he was a derecho rushing across the plains, blasting through the landscape with full force.

Outside of Chamber Chorus, I am taking one other music class,⁠06 21M.283, or Musicals, which is truly the class most perfectly designed for my interests. a writing class on autobiography and biography, and I am starting the year-long process of writing an undergraduate thesis for the writing major. In many ways, I am living a double life, taking three technicals⁠07 on database systems, computer system architecture, and computer security. and doing research⁠08 on social media regulation, which I suppose is somewhere between the two, actually. and escaping into the world of art in the corners of my time. This is not to say that I don’t care for my technical classes—I am genuinely excited by all of them, in different ways—but to me, art is still the escape.

Of course, writing in particular is a much more solitary craft than music-making. Much of the satisfaction of writing comes in the moment of reception, rather than the moment of creation, which can often be delayed days, or weeks, or months. Sometimes, I do feel very alone. I meet once a week with Fatima N. ’25 to discuss the poems we’ve written that week, and once a week with my (auto)biography class to discuss our pieces,⁠09 among a litany of other subjects. but apart from that, I am producing text into a void, mostly for myself, until eventually, some day in the distant future, it might blossom into something else.

Despite, this, I keep writing. I keep writing like my life depends on it, because, it, too, brings me into that calm headspace, twirling words around until something beautiful or, at least, something sensible emerges.

I’ve been struggling with the question of how to continue making art in the real world, once I graduate. I feel like I learned a lot about how to live this summer. I am so much closer to having the answers regarding what I want to do, and how I want the general arc of my life to go on after this year, but the details are still blurry. It feels like there is something about the liveliness of MIT that makes it so much easier for one to continue writing, to continue singing, to continue making art: there are workshops that you can take which will force you to write in increasingly difficult forms; there are choirs and wind ensembles and symphonies where you can learn to perform increasingly challenging music.

Art is built into the campus and the campus life of MIT. Every major renovation or campus construction project comes with $500,000 to commission a piece of art. Students get free access to the Institute of Contemporary Art and Museum of Fine Arts, discounted tickets to the Boston Symphony Orchestra, and every year, the List Visual Arts Center runs a lottery where MIT students can pick a piece of contemporary art to hang up in their room for a year. Acapella groups roam the halls, occasionally terrorizing classrooms for a serenade on Valentine’s Day. It seems hard to live up to that kind of experience outside the walls of academia, where, it seems, I am destined to end up at some point.

the very cool art piece i got this year
in context!

This summer, as a sort of experiment, I ran a poetry workshop with a few other MIT folks. We met ten times over the course of the summer, each week bringing a new poem according to a new prompt, whether it be a form⁠10 like, say, a sonnet or sestina. or a topic.⁠11 like, say, responding to works of art in a gallery. Some weeks, we had seven or eight poems; some weeks, we had three. I was happy to have made all of this art at the end of the summer, happy to have attempted wild prompts like the intentionally difficult paradelle or writing a poem in another language,⁠12 this is where we will sidebar briefly to talk about Chinese poetry. To be clear, I am not good at Chinese, and the poem (included above) is also not good, but, the process of writing it was incredibly difficult and revealing. Because of the tight constraints of writing a poem in 20 or 28 characters (not to mention the rhyme and tone constraints), grammatical subjects and context necessary to establish tense are often missing, creating this weird and eerie sense of timelessness. The information density of a good, classic Chinese poem is this truly incredible, magical experience. but I felt unfulfilled. Something was missing. In many ways, summertry was both a success and a failure for me. It proved that it was possible to continue making art after college, but it also proved that it would be much harder without a serious kind of intentionality to it that is hard to find.

I think I am not sure I have an answer to this question, except to say that we will have to continue living, and find out where the art takes us. I am not sure I will have the energy to keep on making things, although perhaps I am underestimating myself in that regard. Sometimes, however, I think about the cover band at the Richmond Night Market. I think about five people on a stage, making music, having the time of their life, and sometimes, I think it will be okay.