I put on my Sunday clothes and see the whale!

DID YOU KNOW? The Music Man is my least favorite musical ever. The only reason I even like Meredith Willson is because he wrote “It’s Beginning to Look a Lot Like Christmas.”

Ahhh, New York City, winning the lottery (for Avenue Q), gourmet French Fries, Taboo, Mitra and I got TO SEE THE WHALE!

So, for words describing the entirety of my visit, you can check out Mitra’s entry on the subject. This entry is gonna be mostly pictures.

So, like the good traveler I am, I got to Boston’s South Station at 10:28 AM ready to depart for New York at 11:00 AM. Of course, the Fung Wah Bus Company hurriedly stuffed me on the 10:30 AM bus anyway, which they don’t really advertise on their website, but I’m not good at this kind of thing anyway. Anyhoo, four hours of karaoke country music later, I was in New York’s Chinatown.

There are two ways to get to New York from Boston, both departing from South Station–either grab the Chinatown Bus or a Greyhound. With the easily-locatable special promotion on the latter, both are around $15 each way, so it’s really up to you which one to take. Personally, I think it’s incredibly great to be only a 10 minutes walk from Boston and then have another whole city opened up to you that’s only a short bus ride away. If you don’t already have high school friend coing to college in NYC, you’re bound to have some sort of friend/classmate/coworker/enemy down there with a apartment/dorm/house/tiny penthouse that they’d be more than glad to let you crash for a day. At thirty dollars round trip for a weekend, it’s really a price that can’t be beat.

MORAL OF THE ENTRY: Impose yourself on people. They love it!

Chris Matthews taught me that one.

Anyway, the rest of the day is unimportant–except the time when we almost ordered a $288 Chinese New Year party platter in the Singapore Cafe and almost ordered a $350-per-person dinner at Masa, “New York’s Most Expensive Restaurant.”

We knew from this website that Avenue Q sells rush tickets on a lottery basis for the low, low, unbelievably low prices of $21.25 (compare to $101.25 for tickets straight from the box office), as long as you get there around two hours before the show and drop your name into a glorified oil drum. Mitra was worried that we’d have to zip over to The 25th Annual Putnam County Spelling Bee instead, but I had a feeling, and indeed, when the ticket-drawing guy stared in disbelief at the third name drawn from the hat, we knew it just had to be “Mitra Lzhpb*n!xobile” (name changed to protect the innocent). 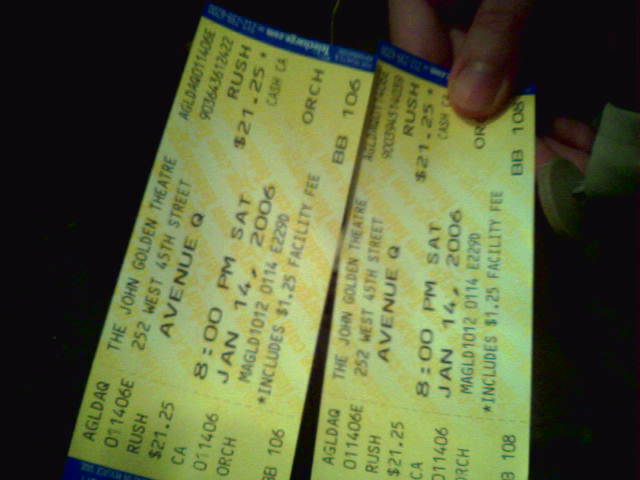 Here are our coveted golden tickets. As the abovementioned website shows, most popular shows do some sort of rush program… some do this lottery about two hours before the show, and some are of the camp-out-all-night variety, which I’ve done before for Aida. By the way, about 60 people entered the lottery and they drew 12 tickets. What was the probability of exactly one of us winning?

Secretly, I had hoped that both of us would win (Mitra first), and then I would have to give upthe other tickets, to the thudnerous applause of 58 puppet-starved New Yorkers. What would the probability of that be?

So, do these tickets make you happy when you win them? 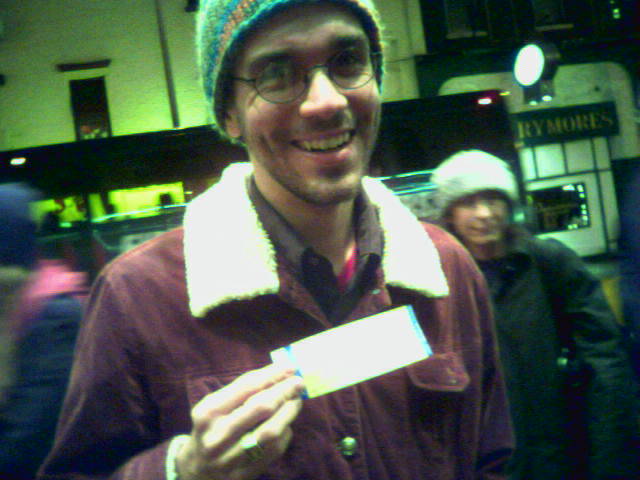 Well, I wanted to get a picture of Mitra holding them, since they were her tickets and all, but Mitra is actually a vampire and doesn’t show up on film, so I had to stand in for her.

And were these good seats? 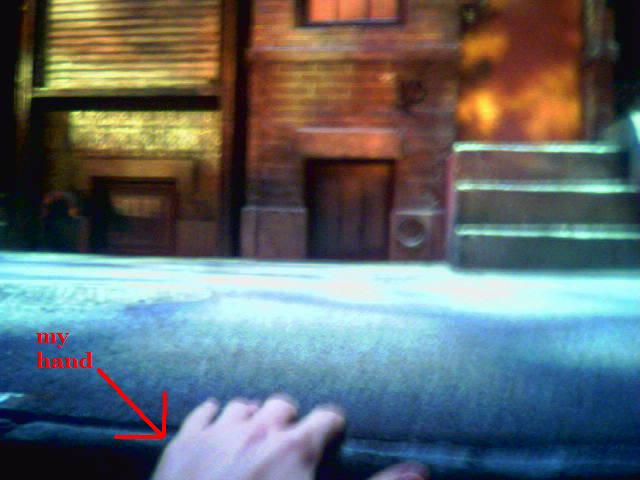 Although the producition was stupendous in every conceivable way, it was actually a little weird sitting so close to the stage, because it ruined the illusion of the puppetry just a little bit (the show is like Sesame Street, except you can actually see the puppeteers walking around on stage rather than having them concealed below), so I’d like to see it from a little farther back sometime. Still, any seat that gives me a good view of Barrett Foa is fine by me.

One of the most distressing things I was told upon turning twenty was this nugget of wisdom from Alicia ’06: “Now that you’re twenty, you can’t have teen angst anymore.” I thought, “NO! NOT MY TEEN ANGST!” but Avenue Q was actually the perfect way to get rid of it and transition into twentysomethinghood… who can argue with a troupe of Sesame Street puppets cheerfully intoning this anti-angst anthem: “It sucks to be me, it sucks to be me. Is there anybody here it doesn’t suck to be?”

I think that’s going to be my new motto for life.

After the show we trekked (Trekkied?) back to Mitra’s posh apartment to play Taboo with Matt ’08 and Ruth ’07. I mean, Mitra and I arrived there first, regardless of how I constructed that sentence. Anyway, beyond Ruth’s most brilliant clue (saved for posterity in Mitra’s entry), the secret theme running through all of our clues was Heidi Klum.

SUNDAY MORNING. Inspired by reruns of Legends of the Hidden Temple, we decided to go running, and managed to go about three blocks to the edge of Central Park before I realized that I didn’t pack gloves at all to come to New York, because it was 58 degrees when I left but started snowing 12 hours later. So, deprived of that celebrity-watching opportunity, we decided to head down to Pommes Frites in the East Village. Now, as Rhiannon pointed out, Pommes Frites does advertise itself as “authentic Belgian fries,” so I did transpose myself above when I referred to this particular dish as French fries. Her comment got me to reading about the actual origin of the name and nationality of French/Belgian fries on Wikipedia, which is fascinating and surprisingly deep.

So, this is how good the belgian fries were… 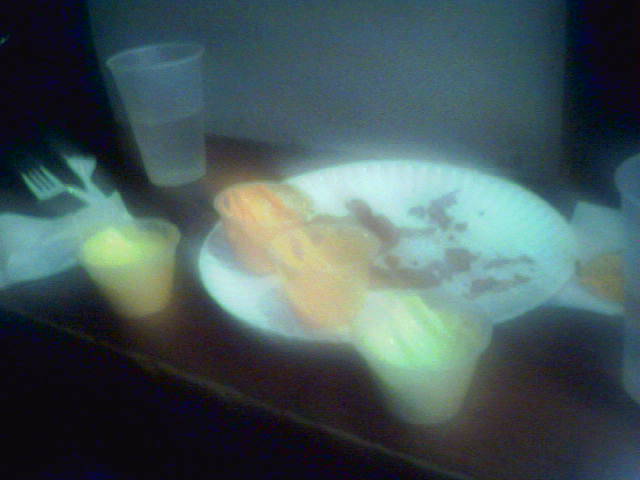 We ate that many before I remembered that I wanted to take a picture. From left to right, the sauces you see are honey mustard mayo, sundried tomato mayo, mango curry mayo, and pesto mayo, and I’d recommend every single one of them… except the first one, which I’d replace with the Vietnamese pineapple mayo if you happen to go there anytime soon. I recklessly chose the honey mustard instead without asking for a sample, but the lady working there was nice enough to give us a sample of the pineapple on the way out, and it is delicious enough to make kings and vagabonds believe the very best.

Next, we were off to the American Museum of Natural History to see Laura ’06 and Vincent NYU, who is being stalked by Ethan Hawke (lucky!). We did not see Ethan Hawke. But we did see this picture of a beaver in the basement of one of the subway stations. Surely, we lead a charmed life. 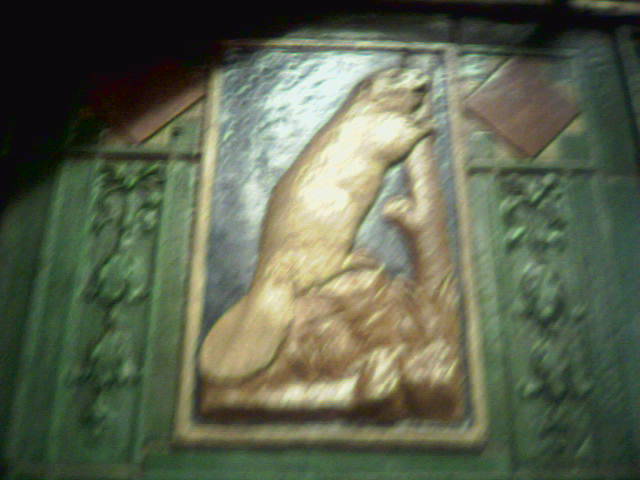 The museum was brain-screamingly good; I was just like a kid in a… in a museum again. The Hall of Biodiversity totally rekindled my interest in hominid evolution from AP Bio, all the animal sculptures they had set up were stunning, even the gift shop rocked (pun intended) and I finally got to see the whale that I had heard referenced so many times while rehearsing performing the musical Hello, Dolly in tenth grade. Well, I can almost understand why Barnaby was so excited. I could spend, like, a year there. That would be great, considering that tickets are kind of free. Kind of. Read the fine print.

And I saw this beaver mask carved by one of the Native American tribes of the Northwest. 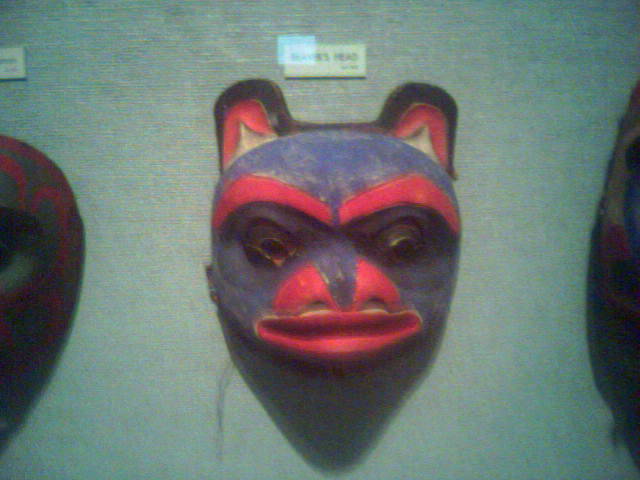 Coincidence? I think not.

Anyway, I really recommend this restaurant for Cuban food if you happen to be in New York; it’s a little pricey, or pricy (I’m not too sure really), but Mitra and I still stayed under our Rachael Ray-allotted forty-dollars-a-day between that and the belgian fries, so it was all good. Then a lot of other stuff happened, including the world’s greatest cake decorating competition and ice skating and spinach and BREE IS AN ALCOHOLIC and we almost got pastries but I was shuffled quickly off onto another unscheduled Fung Wah bus at 2:45 PM. I passed out reading The World According to Garp and didn’t really even notice that we arrived an hour and a half ahead later than we were scheduled to arrive. But, I mean, don’t let that stop you from taking Fung Wah. They’ve only caught on fire like once in the past year.

Whew, that sure was a mouthful in a nutshell. Infinite thanks to Mitra for lodging, navigation, tickets, and overall one of the best birthday weekends in recent memory, and finite but large thanks to readers like you.