Did I tell you about the time when we hijacked a harbor patrol boat?

DID YOU KNOW? Sufjan Stevens’ brother Marzuki finished 20th in the 2006 Boston Marathon.

Also interesting–you say Sufjan Stevens’ instead of Sufjan Stevens’s because Sufjan Stevens is a proper noun as well as an accomplished songwriter. However, if you were to use a common singular noun that ends in s, such as abacus, you would need an s with the apostrophe. So it would be “the abacus’s beads.” BUT if you have a common singular noun that ends in s AND the next word begins in s, you don’t use an apostrophe. So you would say “my boss’ shenanigans.” This is fascinating to me.

Upon FURTHER consultation with Dizzle ’09, whose father is named Douglas, I was inspired to do more research into this grammatical phenomenon. Apparently you use an s when a proper noun ends in an “s” sound, but no s when the proper noun ends in a “z” sound.. So you say “Sufjan Stevens’ banjo,” but “Douglas’s lovely daughter Amelia.” Because Douglas with an s goes “ss” not “zz!”

You know who doesn’t care about apostrophes? A pirate.

Last weekend my floor, Conner 2, decided that it would be an awesome idea to take a pirate-themed boating/camping trip to Bumpkin Island in the middle of Boston Harbor. Why? Well, sometime over the summer Conner 2 resident Jeremy, a native of Hull, Massachusetts, was all “Hey, my dad owns a boat; let’s spend the dorm’s money and take a trip out into the middle of nowhere!” And everybody else was all “Woohoo! Nowhere!” And so, with the evening spread out against the sky like a patient etherised upon a table, we set off on a commuter boat (really!) from Boston Harbor to Hull. 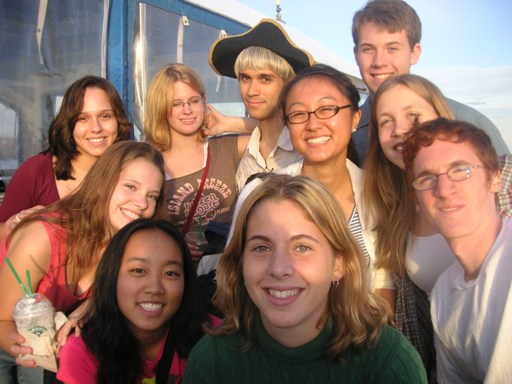 Here you see our merry band heading out on the commuter boat. Honestly, I didn’t realize that commutation from Boston out to the cape was so common that they would charter five boats a day for it, but I guess if the shortest route from my house to my work was across a bay, I guess I’d see things a little differently. 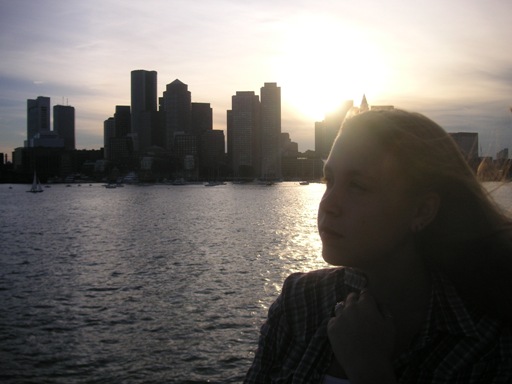 Here is this incredibly artful for those of you who believe Princeton Review when they say MIT is so ugly that students walk around unwashed and are driven to vomit on the terrible architecture. At MIT, the girls are beautiful, the city is beautiful, even the photographers… are beautiful.

When we got to Hull, we were greeted by a giant windmill. I really wish I had taken a picture of it so I could convey to you how awe-inspiring it was. Truly a beautiful example of modern technology at its finest Supposedly it provides 1/3 of all the electrical power to the town of Hull. “Why not just build three windmills then?” I asked. We came to the conclusion that windmills are probably difficult to build because they are most functional on hilltops or coastlines–in other words, prime real estate that rich people want to buy and sell and not have covered in mutilated duck carcasses. Oh, whatever happened to eminent domain?! 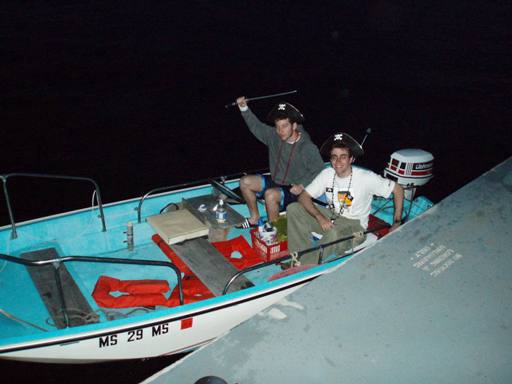 Jeremy ’09 and Mark ’09, who arrived at the island earlier in the day to start setting up camp, got a little more into the whole pirate mood than we did, although Cassi “I fought the law and the law won” Hunt ’08 was happy to provide us with eyepatches that she bought for her photo shoot with the Boston Phoenix last year. So, in groups of five we somehow made it out to Bumpkin Island in Jeremy’s lovely little not-quite-ready-for-piracy boat…. 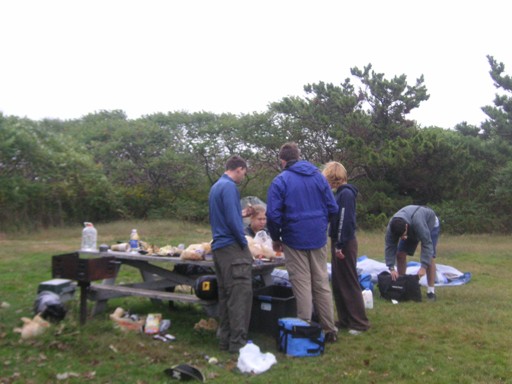 …where we promptly set up camp (so prompt, in fact, that the sky actually got lighter in between the past two photographs). Our graduate student tutor, Chris, who takes care of the floor, makes us food, dispenses condoms, and ensures that we don’t kill or shower each other, is also the vice-president of the MIT Outing Club, so he scored us some nice tents, a wide array of grilling equipment, and about fifty seven thousand gallons of water. 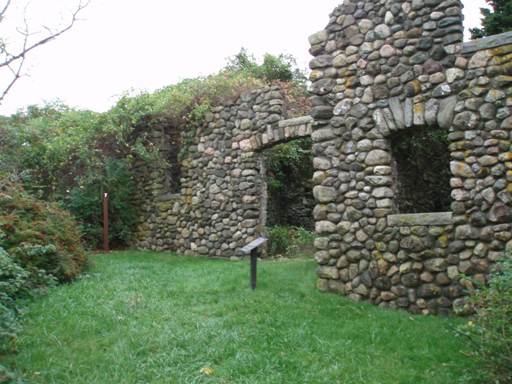 With that in place, we had some time left over to do a little exploring. Turns out that Bumpkin Island was actually an abandoned World War II training facility that prepared over 15,000 seaman to go overseas. After seeing 2,000-year-old ruins all summer song, this wasn’t so impressive to me, but it was a somber reminder of the past. 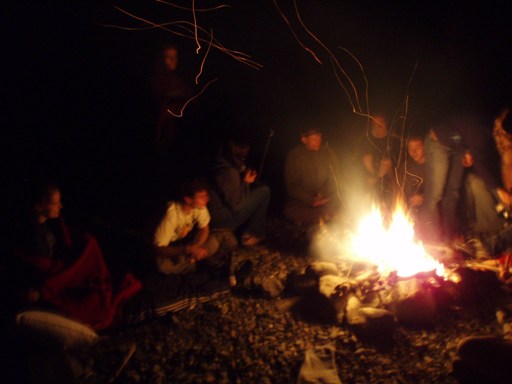 And of course, no Conner 2 outing would be complete without a game of Mafia. This night it was kind of a tricky game because sparks from the fire kept flying into our eyes and nearly killing us, and also I fell asleep in the middle, but other than that it went pretty well, as far as Mafia goes. Of course, to keep in the theme of the trip, instead of playing with mafia, inspector, and prostitute, as we usually do, we decided that we would go with pirates, harlot, and the royal coast guard of Wales.

But the real story came the next morning, when there was a hurricane advisory of which we had not been advised, and also the motor on Jeremy’s boat died an ignominious death at a least opportune moment. After fiddling with it for about half an hour and contemplating our possible demise on the island (why did we dump out that fifty seven thousand gallons of water?), we finally got picked up by harbor patrol and taken safely to shore. Luckily, harbor patrol was actually a friend of Jeremy’s dad, and just thankful that we didn’t head out in the boat to our imminent deaths on the rocky shore. And, once again, in keeping with the theme of the trip, we decided that we had actually hijacked the harbor patrol ship and forced him to take us to shore upon threat of death. So, that’s our story, and we’re sticking to it.

ARGH, I’m behind on blogging! I hate that! Do you want to hear about jury duty?

8 responses to “It’s driving me nuts”