The Korean Flying Tigers! What could possibly sound more exciting than that?

Last night the MIT Sport Taekwondo Club sponsored a demonstration by the Korean Flying Tigers, and since half of my floor is in the club, I decided to head down to the athletic center to check it out.

I happened to be sitting next to the sports editor for The Tech, and through a bit of investigative journalism he discovered that the Flying Tigers are from Kyung Min University in South Korea, where it’s possible to major in taekwondo like an MIT undergrad would major in political science or civil engineering. See how seamlessly I incorporate these links? I am a blogging genius. Anyway, the Tigers themselves major specifically in taekwondo forms.

So, they should be about as good at taekwondo as I am at chemical engineering. 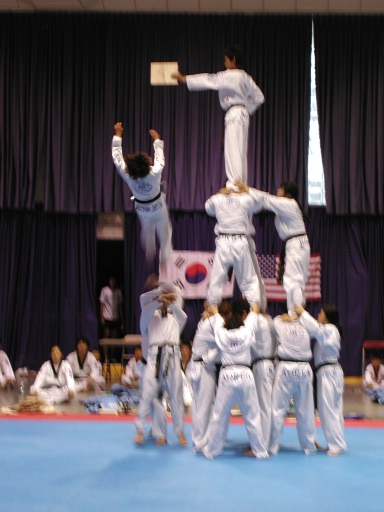 Well, yeah, I’d say that’s at least as impressive as the 63 percent I got on my fluid mechanics final.

The show alternated between variations on three basic routines. 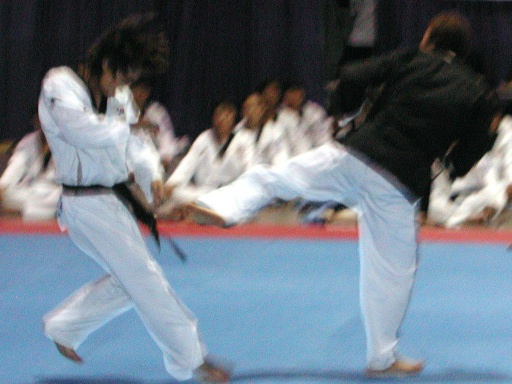 2. well-choreographed, perfectly-synchronized dance routine to a something like Beethoven’s “Pathetique,” Mvt. 3, or Britney Spears’ “Baby One More Time” 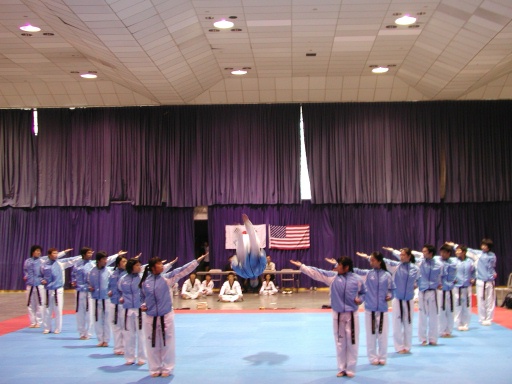 3. insane board breaks involving a great deal of spinning, flipping, leaping and/or diving 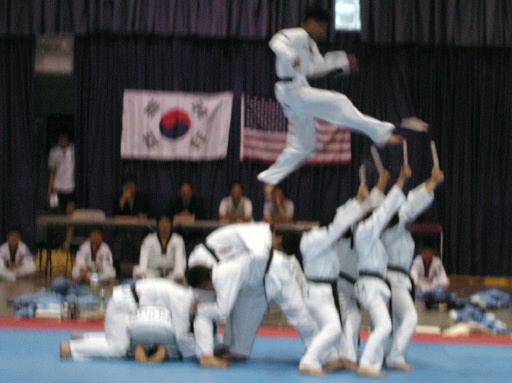 This shot is suprisingly similar to the third picture on this promo page. Just lucky I guess–spaghetti against a wall.

The whole thing was just fantastic–the best part is when they’d set up like 15 people holding 6 boards and you’d have to wonder how the taekwondoist could possibly contort himself in midair to hit all of them, then he’d just calmly walk up, jump 4 feet in the air, do a split and then a backflip, and then like smash one with his forehead and one with his tongue.

Somebody pointed out that during the sparring, there seemed to be a lot of air in between the kicks and “injuries.” This was true, I guess, but it wasn’t exactly play-fighting like you’d see at the Renaissance Faire–if one of these people kicked me, I’d probably die instantly. So, it’s better to err on the side of caution here. And, yeah, the plot was a little predictable in all these skits, but the acrobat double-turning flip throws most assuredly were not. In the words of Brian ’06, “It’s like a bunch of interpretive dancers who could kill you.”

The moral of the story is that MIT Sport Taekwondo Club is awesome, but we already knew that because they’ve won pretty much every tournament ever. And if you say any differently, they’ll kick you to death.

And special thanks to Brian ’06 (sports editor) and Beckett ’06 (vengeful god of school newspapers) for letting me sit in their special press section so I could get these great pictures.

2 responses to “Kick to the limit!”