and hoping to finish strong

I wasn’t actually planning on writing a start of semester post this time around, mostly because I feel like there are metaphysically bigger things to blog about. But, since it’s my last semester as an undergrad, and I’ve consistently done this type of post for almost⁠01 going through the archives, it looks like I missed sophomore fall, which is fine, cause sophomore fall fucking sucked. good riddance to sophomore fall every semester till now, I figured that I’d do it for old times sake. 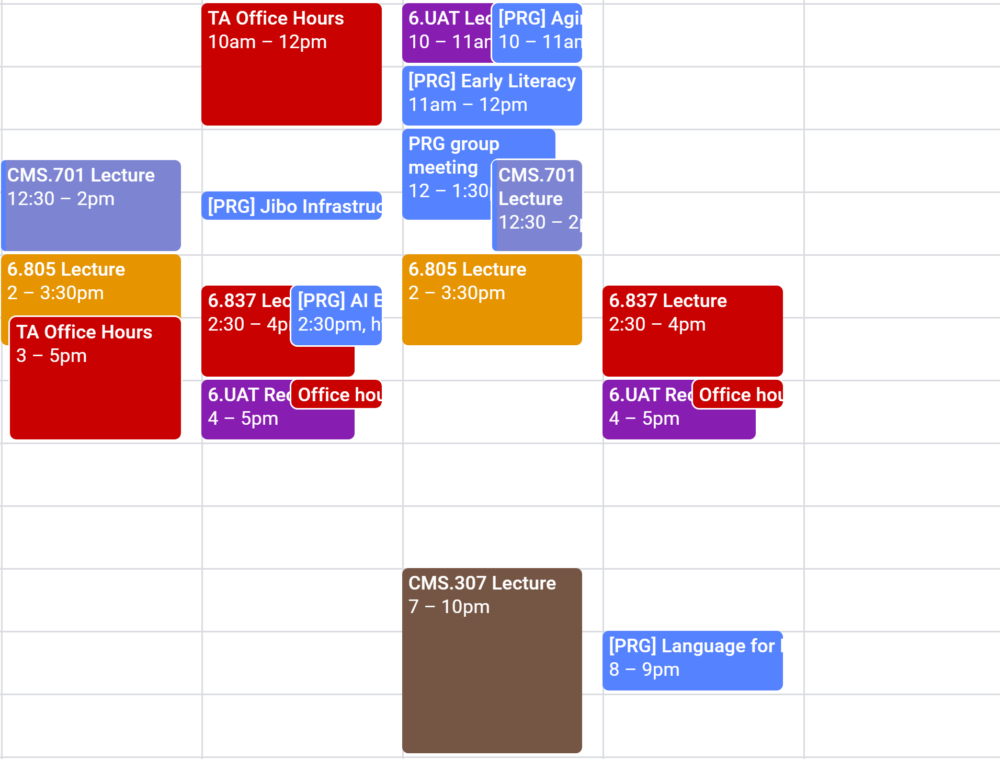 CMS.701 (Current Debates in Media): This is the capstone class for the CMS major, which I’ve somehow managed to put off until my very last semester. We read and debate about various things happening in the media at the immediate moment, like a lot of the shit Trump is constantly trying to pull, whether photoshopping women’s bodies should be made illegal, and various other happenings in the world. I didn’t know that we actually had to debate each other, and I’m still traumatized from the very short period of time in which I tried out high school debate, so we’ll see how this goes.

6.805 (Foundations of Internet Policy): This is the first law class I have ever taken, and is probably the only one that I will ever take. It’s a long running class⁠02 ~25 years according to the instructors that has been around since before people even used the Internet on a regular basis. We go over the interaction between law, policy, and technology that relate to all the rapidly evolving controversies over control of the Internet. The goal of the class is to learn to analyze the various precedents to different Internet legal cases, and write up our own policy recommendation by the end of the class. We go over famous cases and learn to be pseudo-law students by writing case briefs. A good friend of mine and I are taking this class together, and we’re super psyched to write a really great paper. We’re hoping to get it published somewhere if possible.

6.837 (Computer Graphics): I’m hesitant to even put this class on here because the likelihood of me dropping it is SO HIGH, even though I’ve been waiting to take it forever. It turns out that I don’t remember any math, and that taking 18.02 junior year of high school seemed really hardcore but actually was a bad idea, because four years later, I don’t remember a single bit of it. It took my brain a hot second to remember how to take a derivative, and hopefully I will not have to take an integral, because I don’t remember how to take any of the fancier ones. Also, I hate C++. I’ve worked with it twice in internships before, but maintain that it is an irredeemable language and nobody should be subjected to programming in it. At least I have it on PE/NE, so hopefully I won’t actually fail it.

6.UAT (…Oral Communication??)⁠03 </strong>genuinely have no idea what this class's actual name is<strong> : This is the last Course 6 requirement I need to graduate. I originally was never planning on taking this, because I was going to do SuperUROP instead, but since I’m graduating early and SuperUROP is a full year program, I jebaited myself and have to take UAT instead. It’s sort of painful for me, because I really REALLY hate public speaking – as do most people – but honestly, I could afford to get better at it, and I know this class will be good for me. It just hurts me so much to have to give presentations and do improv exercises. I’m not good at them.

CMS.307 (Critical Worldbuilding): This is Junot Díaz’s class! He’s an amazing writer, and also an amazing professor. This class is quickly shaping up to be my favorite ever; the readings and movies are all amazing and are a great break from the pset slog, and also we get to build our own storyworlds and creatively write! It’s been so long since I creatively wrote; coming to college and not being able to write fanfiction literally every single day was definitely a change in pace for me, and it’s nice to go back to my roots, although I am super rusty and the first assignment – write a five page story – almost killed me. Thinking critically about works of fiction and picking them apart is something that I’ve always enjoyed, and I’m excited to do it under the guidance of a real professional^tm.

I’m really excited for this semester. I definitely think that the amount I’ve enjoyed each semester has definitely been on an upward trend ever since a literally garbage freshman spring/sophomore fall, and I’m hoping that I can finish strong. It would really be nice if, for my last semester, I could finally finish strong.