Getting a P+ isn't just for frosh anymore.

DID YOU KNOW? Prussian Monarch Frederick William used to kidnap giants–like, people over 6’6″–hit them over the head, and put them in his royal guard.

Like a freshman? Haha, no, you aren’t allowed to do that until November.

No no, today I felt I like a freshman, hosed for the very first time. Last night I woke up at 5:30 to put the finishing touches on my 10.490: Integrated Chemical Engineering problem set (which eventually turned out to need about two and a half hours of touching) when I encountered my suitemate and moral compass Dizzle ’09, just finishing up a 2.003 lab report herself.

So all day, while I was sitting in my classes slowly passing out from sleep deprivation (did you pay tuition yet this term, Sam’s Mom?) I was also contemplating the prospect of having a class on Junior/Senior P/D/F. You get to do this with any two regular classes of your choice during your senior year–the professor doesn’t even have to know, so he or she will just give you a B or a C or whatever and it still comes out on your report card as that most beautiful grade of all: a P.

“Hmm.” thought I during one lecture. “I remember calculating last year that if I got an A in every one of my six classes this term, my GPA would increase by one tenth of one point (MIT only rounds to the tenths place)! But if I got a B in any one of them it would stay the same.”

But I reconsidered an hour later: that’s really the dumbest reason anyone’s ever had for not taking a class P/D/F, isn’t it? I had also been a little worried that taking something on P/D/F would discourage me from learning the material completely, but I actually decided that it would (theoretically) just let me skip the harder problem sets once in a while if I had something else really important to do.

And so, this term is now officially 27% more freshman for me!

What more do you want?

How about JKIM AND A ROOT BEER FLOAT?! 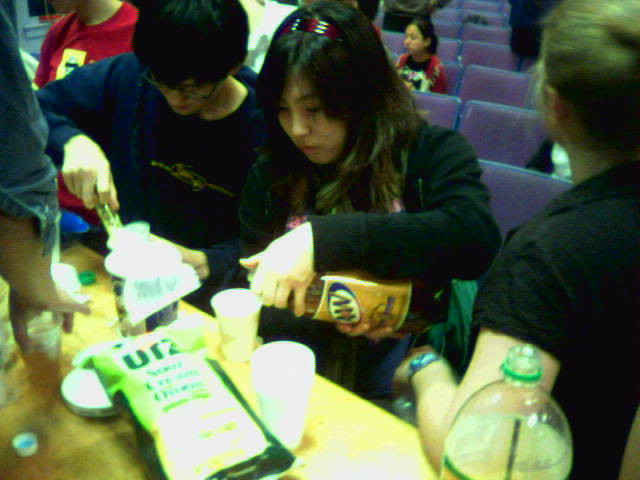 Now I’ve got your attention.