I take my clothes off and go dancing in the rain... with Clay Aiken.

Sam’s Mom successfully conspired with Mitra to drag me to the Clay Aiken concert Sunday night at the Bank of America Pavilion. Though I’m by far the biggest fan of American Idol at MIT, I was still a little hesitant about seeing good old Clay in concert. I mean, look at this: 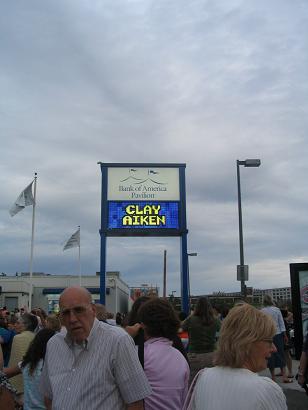 Now imagine that you’re walking toward that venue, with the intention of entering, sitting down, then standing up again and screaming for two and a half straight hours of nonstop glory notes. Just think about it seriously for a second. Would you really continue toward that sign?

Read on at your own risk. And, believe me, this is gonna be a long one.

Still, I ended up being pretty excited about the concert for two reasons.

1. Fans of Clay at a certain internet message board at which Sam’s Mom may or may not post offered to make a Clay-themed nametag for me, featuring this picture of Clay from TV Guide: 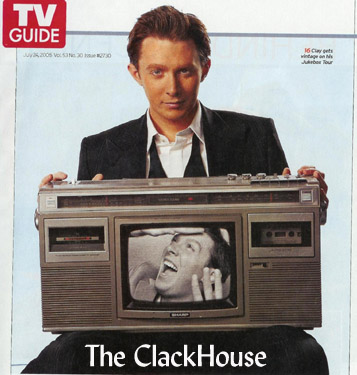 I have no idea why Clay is holding Clay inside a television, or what this has to do with TV Guide or why it appeared there, but it might just be my favorite photograph ever.

Then, when we got to the concert, we found out that they had forgotten to print my nametag, and I was really, really upset. Like, I was despondent. Utterly heartbroken, really. Seriously, at that moment, I couldn’t imagine anything more important to me than a clever nametag with a picture of Clay Aiken trapped inside a portable television set.

Oh, you think that’s sad? Well, it’s 1 AM right now and I’m working desk and looking at pictures of Clay Aiken on Google image search. I hope nobody walking by can see the computer screen. Of course, since the desk computer is public, now everyone knows that somebody was actually at desk searching for “clay aiken TV guide” and “clay aiken television picture” and they could probably look at the desk schedule and find out that it was me. I’m so embarassed.

However, sam.mitblogs.com is in their browser history and this is my first time working desk this term! I’m excited.

Okay, no, like, I was just looking at this site. This is what my life has become. Did you just open it and then quickly surf away in embarassment? Did you then look hesitantly to the left and right to see if there was anybody behind you when you opened it? Do you know what I did? I scrolled down the entire page to see if there was a picture of Clay Aiken stuck inside a television set on it. In public, I did this. This is what I do for you people.

Now there’s this girl and she has 7 packages behind desk that she needs right now. I was getting them all for her, one by one, but to expedite the process, she decided to come back behind desk and get them with me and she TOTALLY saw that I’m looking at this site right now but she didn’t say anthing and now she’s packing up her 7 packages and it’s quite awkward. ARGH, just pack up all your stuff and go!

I don’t think you realize what I’m going through to write this blog entry.

But I digress. I’m writing the rest of this entry from an Athena cluster on my lunch break from work, so you can bet that there aren’t going to be any more pictures today. Anyway, the second thing I was excited about was…

2. Clay’s bizarre take on When Doves Cry.. I’d heard this like a dozen times in the car driving up to Boston with Sam’s Mom, and, let me tell you, this is the best cover song ever performed since Aretha Franklin sang “I’m Eleanor Rigby” in 1972.

So, yeah, it’s hard to imagine the wholesome Southern gentelman Clay Aiken of Solitaire really selling Prince’s provocative minimalist dance masterpiece, but luckily, musical director SAVON realized that too and decided to prepare kind of an absurdist take on the song. The song beigns with Clay and his backup singers in purple choir robes (get it?) looking heavenward expectantly. Accompanied only by solo piano, Clay takes twenty minutes to sing the first chorus, highlighted by a thirty-second “why do we SCREEEEEEEEEEEEEEEEEEEEEEEEEEEEEEEEEEEEEAM at each other?” Then, he rips off his choir robe, the main riff of the song comes in with kind of a funk-metal tone, and Clay begins to engage in some of the most lascivious dancing I’ve ever seen from him. Seriously, if you thought the three hip shakes at the end of Grease were a little inappropriate, you probably would have fainted when you saw this. There was definitely grinding with the backup dancers, although it was accompanied by a Clay belting out the word “cry” for 20 seconds, so I guess it wasn’t really too suggestive after all. Then, after the first two verses, just when you started to think, “gee, I bet this song would be even more awesome if they distorted Clay’s vocals a little,” they turned on a vocoder! Yeah, that was definitely the performance of the night, if only because it was a lot like the strange waking dreams I used to have in 18.701 (before I dropped it).

Really, the whole concert was overall enjoyable, but not so much because of the actual musical performances… mostly just for the spectacle. More often than thinking “wow, Clay sang Solitaire quite excellently,” I thought, “wow, Clay is going to sing Alone, that Carrie Underwood masterpiece; should I yell ‘Go Carrie?'” or “wow, everybody in the audience is making a stabbing motion during this song; I guess I will too and then do song charades with Mitra.” I don’t know what the people behind us thought of my manic, Paula Abdul-esque dancing and clapping, but, honestly, I’m not going to let Clay Aiken fans tell me that I’m behaving strangely at a concert, anyway.

The only song that I probably could have enjoyed without any irony was his lovely understated piano-only take on “I Can’t Make You Love Me,” except about half of the audience decided that since this was the quietest part of the concert, it would be the best opportunity to SCREEEEEEEEEEEEEEEEEEEEEEEEEEEEEEEEEEEEEAM their love for Clay Aiken. I mean, how else would he hear you except during a ballad? So, if I had been transcribing the lyrics, they would have gone something like this:

Turn down the light,
Turn down the TAKE IT OFF CLAY!!!
Turn down these voices,
WE LOVE YOU CLAY!!!
Lay down with WE LOVE YOU MORE CLAY!!!!
Tell me no lies,
Just AAAAAAAAAHHHH!!! me close,
Don’t patronize
Don’t MARRY ME CLAY!!!
VERMONT LOVES CLAY AIKEN!!!

The entry title is dedicated to the one song (out of over 100) in this entire concert that I wish would have gone on just a little bit longer. Clay actually handled uptempo Ricky Martin surprisingly well, and even did the “help I’m stuck in a wind tunnel” dance from the video.