The one where people drive up just to visit me.

Pretty much every day, I remind my friends that “if you come up to Boston, I’ll find you a place to stay and show you around and we’ll all have a great time.” However, still, it’s one of those things that I never really expect to happen. So, I was sitting at work on Friday afternoon, happily turning turkeys into oil and running HPLC, when who should call but my old high school friend Alaina. Turns out she and three of my other friends from high school marching band decided to come up to the Boston area for the weekend.

Well, if I’d known they were coming, I would have baked them a cake. Unfortunately, I had turkey carcasses to attend to at that moment, but in two hours I was able to finish up my research and head down to the North End, where I met them at Mike’s Pastry. Probably the most famous bakery in Boston, if not the entire world, Mike’s Pastry specializes in cannoli, which they’ll supposedly ship fresh to anywhere in the world. If you’re hosting an event on campus, you can get hundreds of people to come just by buying a bunch of these cannoli and advertising them along with the event. Yesterday, however, we decided to sit down, relax, and enjoy a wider sampling of pastries. 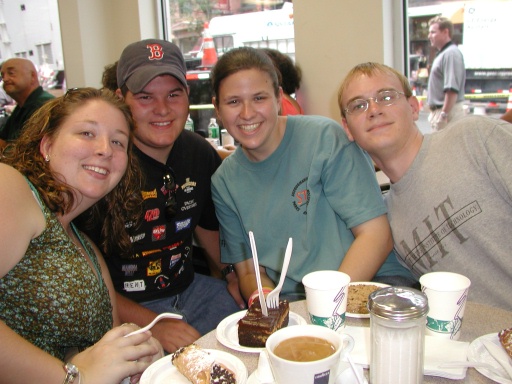 From left to right: Brianna (baritone), Kyle (drumline), Alaina (piccolo and/or saxophone), and Chris (mellophone, MIT ’09), all recently graduated from my high school. It turns out that they weren’t actually in Boston to see me; they actually came up to the area to spectate at the Drum Corps International Championships that weekend in Foxboro. Well, I guess they’re a little more dedicated to the concept of competitive marching band than I ever was. No, seriously, there’s a definite subculture–think Bring It On, except with band.

After Mike’s Pastry they all wanted to know what the coolest thing to do in Boston was. Well, obviously, the answer to that is “visit MIT,” so we took the T down to campus and I gave them the basic tour, complete with the three or four random facts I know about MIT. “Due to a zoning ordinance, the Green Building is the tallest building that will ever be built in cambridge.” “The Landau building is in the shape of a 30-60-90 right triangle.” “The Stata Center was built to look as if it’s perpetually falling down.” 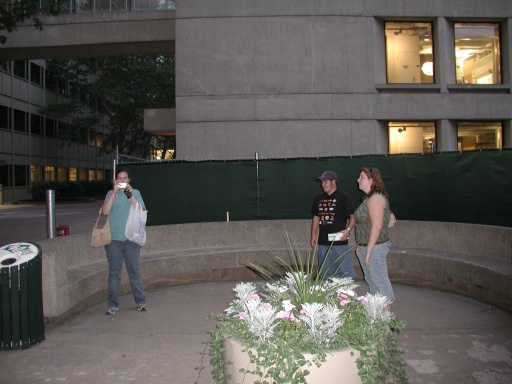 Here, Alaina gets a picture of me getting a picture of these really cool acoustic benches that a lot of people miss. If you’re ever visiting MIT, you definitely want to check these out–they’re located just between buildings 56 and 18 and in the shape of two semicircles. There’s a point on the ground where three lines intersect. You want to stand at this point and talk into the benches. You can also try getting a friend, putting your heads against the insides of the benches and whispering to each other.

It’s a physical and architectural marvel, but if I’m being honest, not the most comfortable place to sit on campus.

Then they told me that our friend Alex (trumpet), who plays in the Bluecoats drum and bugle corps, was going to stay with them at their hotel that night and, for some reason, they needed some condoms to play a joke on him or something. They were going to buy some at a drug store, but I hear those are quite expensive, and MIT Medical hands them out for free. So, the five of us all went up to the information desk at MIT Medical and asked where we could find the free condoms. Twenty minutes of searching later, we found this fishbowl full of them: 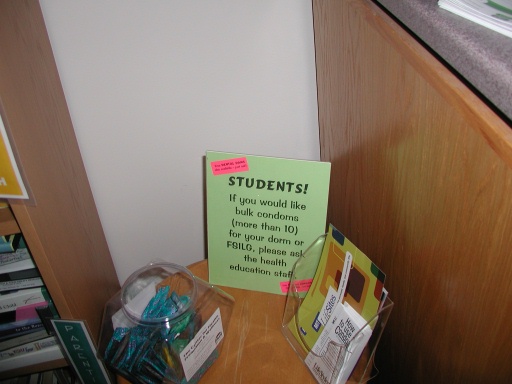 My friends took exactly ten back to Alex, because apparently you have to put in a special bulk condom order if you want more. They were, however, disappointed that the condoms didn’t have the MIT logo anywhere on them. Actually, guys, that would just be really creepy.

And then I took a picture in front of Transparent Horizon, unanimously voted the least attractive sculpture on the MIT campus, so I could always remember the day that my friends came to visit MIT. I was going to photoshop out the truck on the left, but honestly, it doesn’t detract from the picture too much. 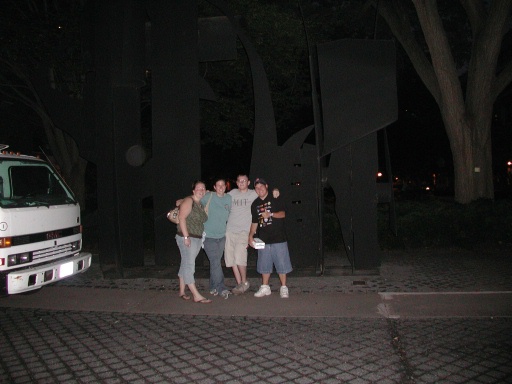 Thanks for visiting, guys!

Alright, well, I’m headed to Six Flags today and then I have to pack up my entire room and move it across the fire escape to Conner 2 and then I also have some HPLC vials to run tonight sometime so I can get some data that I need to analyze for my UROP at home and I also need to buy a train ticket for 6:15 AM and then catch this train so I can be at home in sunny Harrisburg, PA by 3.

6 responses to “Living in the Past”