Third in a trilogy of Berlin photo entries, featuring the country of Moldova.

DID YOU KNOW? This World Cup was the first time that a country qualified no longer existed at the time of competition — Serbia-Montenegro split into separate countries a few weeks before the beginning of the event.

One other thing that you can see in Berlin is two-hundred-something bears, each one decorated by one of the countries in the United Nations. Or you could just finish reading this picture entry and see the coolest of the bears.

I’ll be brief, for the sake of wit. 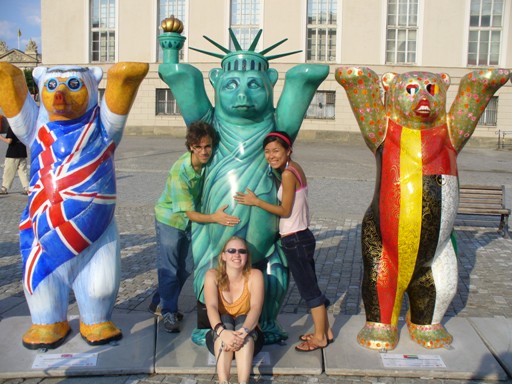 First, Ling ’07, Kendall ’07, and I got a picture in front of the very popular United States bear. We’re right in between the United Kingdom bear, who appears to be some bizarre amalgamation of Austin Powers and John Lennon, and the United Arab Emirates bear. 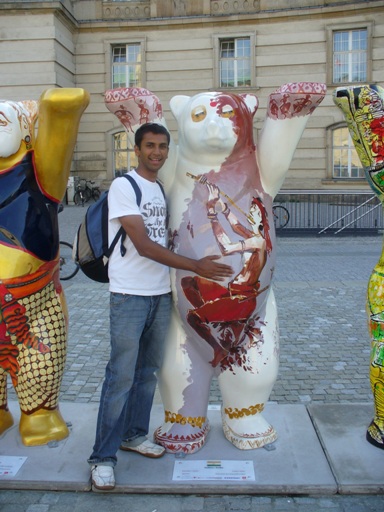 My roommate Kunal poses with the India bear. 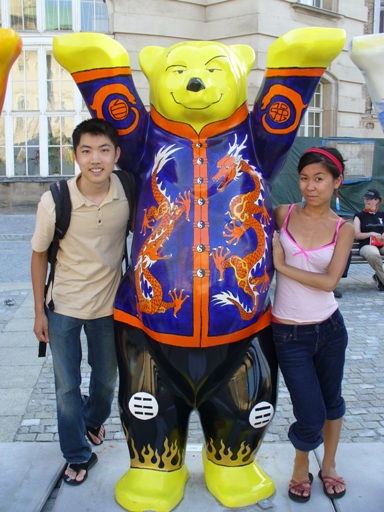 And Ling ’07 and Yue Han ’05 likewise pose with the sassy China bear. 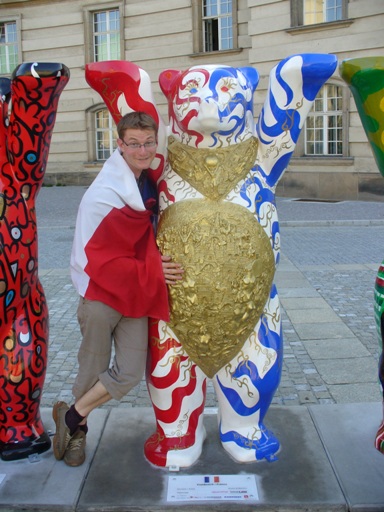 Pascal, from FRANCE (how could you be named Pascal and not from France?) shows some World Cup spirit with the pimped-out France bear. His chest features not one, not two, but at least three Eiffel Towers. 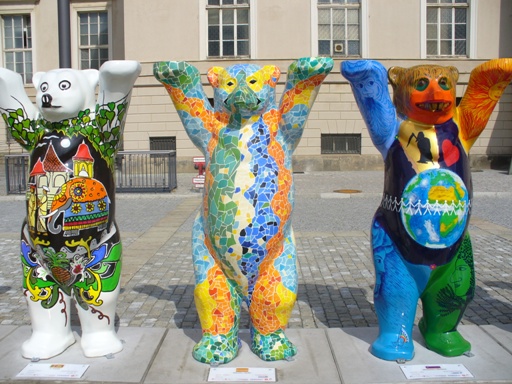 The Spain bear featured this great mosaic-imitating design. The Canada bear, which I inexplicably neglected to get a picture of, featured a real mosaic — made out of broken tea pots, many of which prominently feature the inscription “Made in England.” 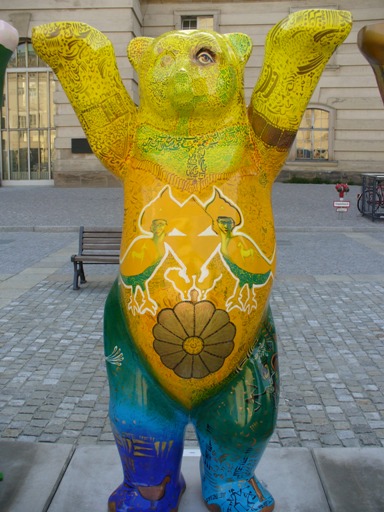 For Mitra, here is the Iran bear. 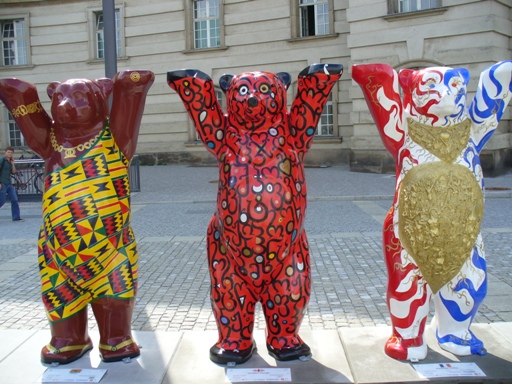 For Ruth, who was once asked to “say something in Georgian” while teaching SAT Prep through ESP, here is the quite vibrant Georgia bear. 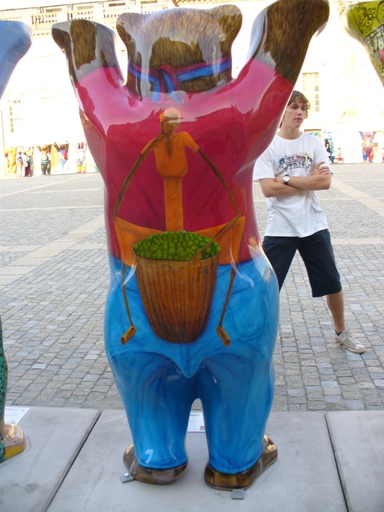 For fans of The Arcade Fire, here is the Haiti bear. 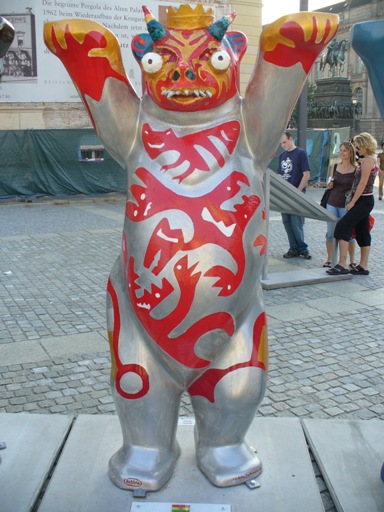 The Bolivia bear is kind of creepy. 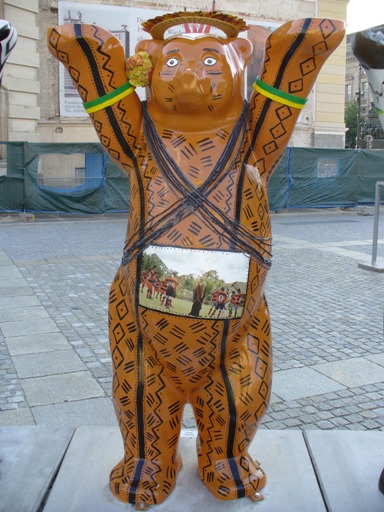 But the Brazil bear might cheer him up with the village soccer players in his tummy. 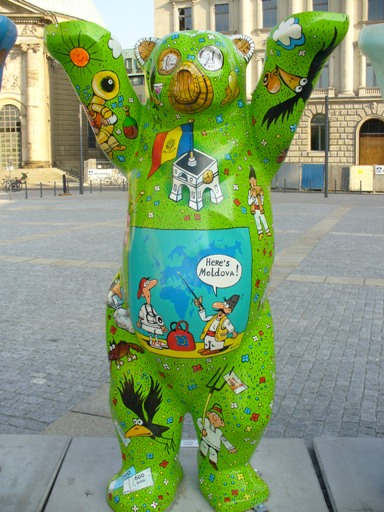 The Moldova bear is informative. Notice the Moldovian currency it has stuck in its eyes. 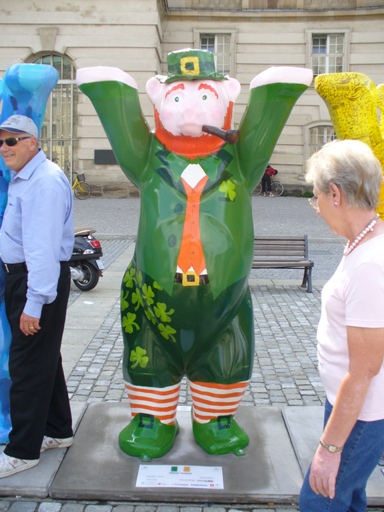 The Ireland bear just bearly edges out the US and UK for “most stereotypical bear.” Nevertheless, it is adorable. 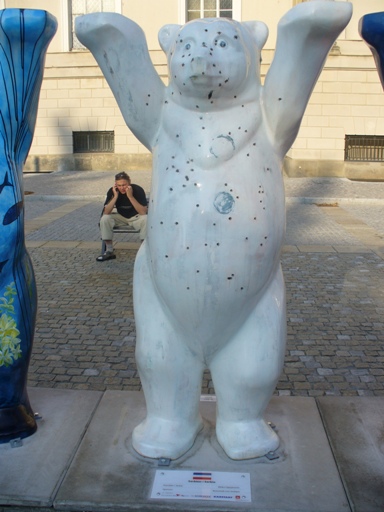 But in the midst of all these whimsical and charming and culture-celebrating bears, we find the Serbia bear… and it makes you think. 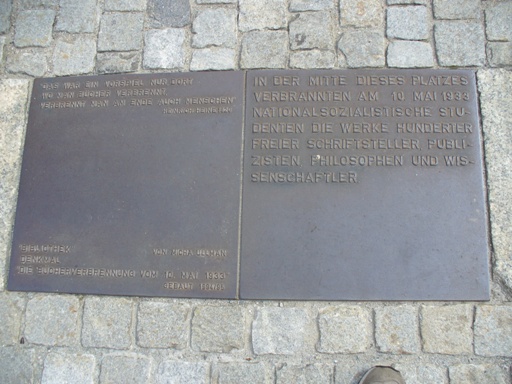 As does this memorial placed in the center of the bears, commemorating the site of a Nazi book burning — �the inscription reads, approximately, “That was a prelude, here where one burns books, will one in the end burn people.” Heinrich Heine, 1820.

I should be allowed to think.