DID YOU KNOW? …about the pretty awesome freeware photo editing software Picasa, unsurprisingly affiliated with Google?

At the request of some commenters, I will have some integration bee sample problems up tomorrow for your integration by parts-ing pleasure. Right now I have a story to tell you.

If there’s anything I learned from MITblogging, it’s that Mitra would secretly like to erase all evidence of her existence from the internet. However, you can’t go around making embarrassing entries like this one about people and expect nobody to ever post videos of you.

Once upon a time at MIT, Sarah Tabacco was a black-clad, curly-haired, fluorine-hating organic chemistry lecturer with impeccable handwriting and blackboard skills beyond reproach. One of the most popular lecturers in the history of the world among students of all majors and genders, Professor Tabacco sought to teach organic chemistry in a rapid, compendious, yet still accessible fashion while emphasizing three major points:

1. Cyclobutene is NOT FLAT.
2. Stereochemistry is the most important thing in the world because of THALIDOMIDE.
3. Fluorine is a TERRIBLE nucleophile.

Despite the 59 I received on Dr. Tabacco’s second test (my lowest grade at MIT for three semesters), I never stopped loving her, even for one moment. I was unsurprised to find that Mitra had almost exactly the same experience except for her higher score on the test. Thus, both of our hearts sank when we discovered from an upperclassman chemistry major who worked in Dr. Tabacco’s lab that she would in fact be leaving MIT to move to New York with her husband, where she had received a faculty position at Raritan Valley Community College. Both of us were, of course, terribly disappointed that she was already married, but even moreso that we’d probably never have a chance to see her again after the end of 5.12: Organic Chemistry. So, in the midst of studying for the last exam, poring over pages and pages of notes about strong nucleophiles and SN1 or E2 reactions, enolate equilibria and PCC, carboxylic acids and turning the imaginary steering wheel to the right, we got more than a little excited and decided that Dr. Tabacco deserved more than just the 6.7 / 7 she invariably got on the course evaluation of every class she taught at MIT. She deserved a tribute video.

And so, we sent Dr. Tabacco an e-mail. Now, I don’t have the original text, but if I remember correctly, it went something like…

We had a question about organic chemistry. We were wondering if fluorine was a good nucleophile or if it was possible to do an SN2 reaction with a Grignard reagent onto a tert-butyl halide. For the exact nature of our question, please look at this video here.

Thanks,
Mitra and Samuel

Yes, we sent her this video, innocuously titled “5.12” at the time, but which I have since decided to dub “Love, Organically.”

The next morning, we got a response. Now, again, I don’t have the exact e-mail to quote for you, but if memory serves my correctly, it went a little something like this…

That was totally the coolest thing I ever saw in my life. You guys are the best students ever, and I will remember you and treasure this video until the day I retire.

Perhaps my favorite part of this e-mail is that she actually signed it “Dr. Tabacco.” I’m always made uncomfortable by authority figures trying to make me call them by their first names–one of my friend’s moms always says, “Oh, call me Terry!” I can’t!! Even at my interview with Harvard, the guy said, “Oh, call me Tim!” and I was like, “…I’ll try.” very meekly. And in college it’s especially awkward when you write an e-mail to a professor asking for a UROP position or recommendation and you call them “Dr. Coyne” or whatever, and then they write back and say, “Oh, Sam, come to my office at 3:00. Best, Wayne.” Or, worse yet, they use a nickname like “Paula” or “Kit” and you just don’t know how you’re supposed to address them if you write an e-mail back! Because you can’t call a professor by their first name just because you e-mailed them once, you know?.

Of course, if I were to become a professor (not going to happen), I would just laugh at the ridiculously formal e-mails students usually write, and write back with lots of exclamation points and randomly capitalized words, and then sign it with something like,

Once I had tenure, I mean.

Anyway, I digress. The happy ending to our story of organic unity is that we got my TA to take this photograph on the last day of 5.12 for Spring 2004, which hangs on my door to this day. 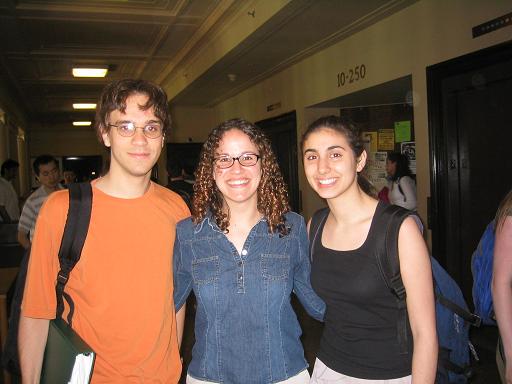 Most coincidentally, this picture was taken on May 12th (5/12) is exactly 512 pixels wide, and has the numbers 5, 1, and 2 in the background above the lecture hall. Do you see how terrible I look next to the radiant Dr. Tabacco? She really is that beautiful. And if you really want to have some fun, check out the OpenCourseWare for 5.12 and 5.13 the semesters Dr. Tabacco taught them. They are truly some of the 21st century’s greatest works of art thus far.

…and we all lived happily ever after. Now get some sleep.