The one where you rapidly cool hot metal.

This was one of those days on which I just did so much that I can’t even write about everything that happened in excruciating yet charming detail like I usually do in my blog entries; rather, I’ll just discuss the most interesting events and you can fill in the rest with your overactive imagination.

I awoke with a jerk. Finding that the weather report was calling for an inch of rain and a thunderstorm in the White Mountains, Joe ’08 and I decided that not hiking would be a great idea. Yet, this day, more than any other, ended up showing me that though it rains and shines, it’s all a state of mind.

Read on and find out how I spent the second day of my summer vacation.

DID YOU KNOW? Portland, ME was once home to the world’s tallest building.

After breakfast, we took a drive down to Old Port, which seemed to be both old and a port (compare to peanut, sweetbread). As we wandered around mostly haphazardly, I got to see the famous Time and Temperature Building, a giant lobster in the Portland Public Market, and an advertisement for Maine’s greatest comedian , Bob Marley. We also stopped into O’Naturals, the nation’s first organic fast food chain, and accidentally walked by an awful-smelling seafood refinery of some sort.

But if you’re going to Portland for a day, forget all that touristy stuff. The real highlight of the morning was Treehouse Toys. After we had checked out their selection of puzzles, putties, and art deco wind chimes for a while, Joe demanded that the cashier find the very best toy in the store and bring it to us immediately. She warned us that the best toy, the “X-Knot”, was completely sold out but nevertheless ran to a secret room in the back and found a display copy for us to play with in the meantime.

In my old age, I’ve come to realize that it’s really the little things in life that bring you the most joy. The X-Knot (AKA the greatest toy ever) consists of a sturdy rope with a rubber ball attached to one end. Your mission is to hold the rope with one hand, letting the ball hang freely, and then, with one rapid flick of the wrist, somehow tie the rope above the ball into a knot. It took the cashier three tries to do it, and she protested that the delay was only because she “hadn’t had her coffee yet.”

Joe and I stood in the middle of the store for about twenty minutes, taking turns trying to tie the tricky toy. Finally, Joe’s grandmother called and we had to head out, but not before the cashier could reveal the deepest secrets of the X-Knot to us. 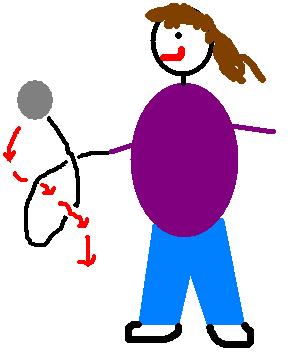 So, the idea is that when you yank the ball up, it makes a loop, and then you have to make the ball fall through the loop as it comes back down, and then it makes a knot. Simple. Well, that gave us one less thing to worry about.

Back at Joe’s house, we crafted our own homemade X-Knots out of plush balls, spare rope, and electrical tape. Though neither of us has taken 2.009: Project Engineering Processes, the toys turned out pretty well, and were dubbed Y-Knots in honor of our Y-chromosomes. Also, it’s a much better name (“Do you want to play with anything?” “Y-Knot! (homonym for “Why not?”)”). Since I can’t find the X-Knot on Amazon or Froogle, I assume it’s not copyrighted or sold commercially outside of Treehouse Toys, so Joe and I might drop out of MIT next semester and start up a Y-knot development company–I know a lot of undergrads often find startups to be very profitable opportunities.

After 6 man-hours of effort, we had managed to tie 3 knots between us. Then we realized that, like most toys targeted at the 6 to 8-year-old age group, the toy could be used for violence as well, so Joe and Manya started attacking each other. 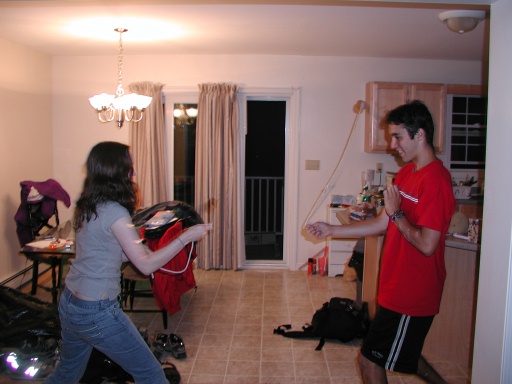 The Y-Knot’s ball is softer than the X-Knot’s (plush, not rubber), so when your children decide to start smacking each other upside the head with their toys, there should be less damage to your property and to your children.

The Y-Knot’s rope can be used for other things. Kids can be so cruel. Luckily, he didn’t realize that the Y-Knot could also be used as a ball gag.

DID YOU KNOW? American poet Henry Wadsworth Longfellow was a native son of Portland, ME.

So we also went down to a random cabin in the woods that Joe claimed his family owns and took some kayaks out on a nearby lake. Joe, his friend Lexi, and I kayaked all the way out to this island in the middle of the lake, which supposedly looked like a turkey once, but was never called Turkey Island, and now it has a politically incorrect name that I’m not allowed to say. 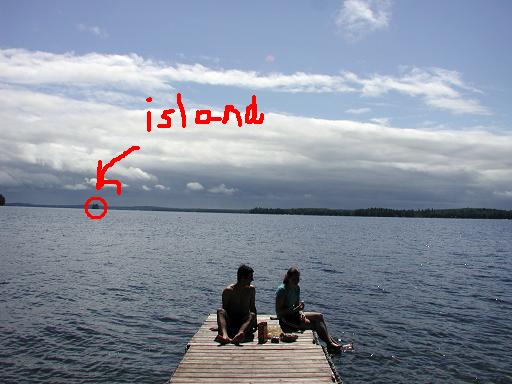 Well, I was pretty tired coming back from the island, so we decided to all sing children’s songs to keep our morale up. Here’s a chance for you to play “Am I really that much smarter than typical MIT undergrads?” This is a list of five popular American children’s songs to which either Joe or I do not know all the words:

1. The Ants Go Marching (Joe and Lexi tried to incorporate a verse about unleavened bread to rhyme with “seven”)
2. The Song That Never Ends (no, really, and there’s only like 16 words)
3. I’ve Been Workin’ On The Railroad
4. This Old Man (I really don’t remember the verse about “delving,” I don’t know why he didn’t just play knick-knack on his shelves if he’s so damn concerned about rhyming)
5. Pop Goes The Weasel

How well do you score?

Lexi, of course, knew all the words to every song.

Actually, I lied, we turned around just before getting to the island. But that’s okay, it doesn’t even look like a turkey anymore.

Sudden realization: Dead turkeys are the controlling motif of my life.

Lexi, Joe and I sat out on the dock enjoying 12 minutes of sunshine and eating fluffernutter sandwiches (which I had actually never tried in my otherwise quite normal childhood), and during this time we decided that the weather had become so splendid that we should just jump into the lake while we still had the chance. Sometime while Joe was in midair, the clouds came out in full force and dT/dt was like -10 deg/min, so we quickly hopped out and forbid ever speaking of swimming again.

And I took the worst picture of Joe ever.

DID YOU KNOW? Portland, ME has the most heavily-trafficked deep-water harbor on the East Coast.

Not since Peter Parker’s “the value of the quantum relativity eigenvector is 7.6 megavolts” has science been so thoroughly abused in a feature film.

You may have seen in McGann’s factors that Sue Storm (AKA Invisible Girl) is an MIT alum, no doubt getting some sort of degree in Course 7 with her award-winning genetics research on DNA and whatnot. Well, if I understood correctly, it turns out that Dr. Reed Richards (AKA Mr. Fantastic) “made the rest of MIT look like a high school science fair” during his days here and that Viktor Von Doom (AKA Dr. Doom), though not really a doctor, apparently managed to get a degree from the Sloan School of Management or something, since he ended up the head of his very own major corporation.

The producers bought an MIT pennant from The Coop to put in Reed’s college scrapbook and even went to the trouble of photoshopping a picture of Reed and Sue in front of this picture of the great dome. There was also an MIT postcard, which Joe mentioned coincidentally matched the ones that were given out for free to all enrolled ’08s.

Okay, so I’m not really one hundred percent sure of all that, but if you can correct me, then you were watching that movie way too closely. Anyway, in the comic book, Sue Storm is supposed to be a model/actress–not that you can’t do that and go to MIT.

The plot is average for a superhero movie, the action sequences are good, and the special effects leave a little to be desired. Still, since you’re the type of person who’s reading a blog that’s ostensibly about the thermal depolymerization of turkey waste, you’ll probably appreciate this movie simply for the sheer magnitude of bad science contained within.

Well, as you probably know by now, the quartet plus Doom are out in space doing “cosmic ray” research or something when, oops, the “ionic cloud” they were looking at “accelerates” unexpectedly and smashes into their ship, which “fundamentally alters the structure of their DNA” and gives them superpowers. Mr. Fantastic has his “body turned into rubber”, Invisible Girl’s new DNA lets her “bend light around her” so she can both disappear and create force fields when she’s frustrated, The Human Torch can now “secrete a flammable plasma coat” from his skin and “heat from his ‘core'” “to supernova temperatures” and also fly “by heating the air around him to utilize ‘thermal currents'”, while The Thing gains super-strength and super-density at the cost of having his skin and “all his internal organs” turn into orange “rocks” (yet still function normally). Oh, and Dr. Doom? Well, his entire body hardens into “an metal-organic alloy stronger than titanium, harder than diamond, and superconductive of electricity”, which also gives him super-strength and lets him throw bolts of electricity that tear holes through people.

I was planning to link all of those “powers” to the appropriate MIT class websites in case you had some interest in the biophysics of superheroics, but then I realized that all the science in the movie is completely made up.

So here’s a picture of Johnny Storm in spandex to distract you from my lack of scientific prowess. 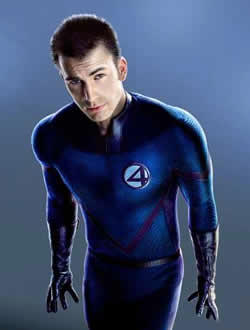 That was basically the script’s approach to science throughout the film.

And by “spandex,” I mean “indestructible super-polymer that was also struck by cosmic rays and thereby imbued with exactly the same mysterious powers as those possessed by the Fantastic 4 as a result of their fundamental DNA alterations.” 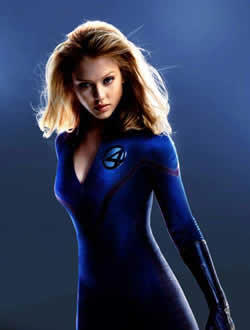 Then after a while, Doom catches Reed somehow and pumps liquid CO2 into his blood or something. “Wouldn’t that instantly kill him, Sam?” Of course not, Chester, because Mr. Fantastic is made completely of rubber, not of human. Doom taunts, “Pop quiz, Reed: Chemistry 101. What happens when you supercool rubber?” then torturously pulls his finger backwards, which would kinda be painful whether or not you’re made of rubber. Later, after casually enveloping Doom in a supernova, Reed makes a parallel query: “Pop quiz, Viktor: Chemistry 101. What happens when you rapidly cool hot metal?”

a) if you’re an MIT student, you don’t call it “Chemistry 101,” you call our freshman solid-state chemistry class “3.091,” because we talk only in numbers, or “Professor Sadoway’s class” (less frequently)
b) neither of these questions are answered by the characters in the movie, it just turns out that rapidly cooling Dr. Doom’s organometallic body instantly freezes him and renders him completely harmless. Joe and I left the theater wondering, “What does happen when you rapidly cool hot metal?

So apparently it’s enough just to invoke the concept science itself when you have a problem to solve… it’s not really necessary to apply scientific principles correctly.

Remember that at MIT, now.