"Hello, MIT Computing Help Desk, this is Laura, how may I help you?"

Lots of students make money during term by working in their UROPs (Undergraduate Research Opportunities Program), but it’s worth noting that there are lots of other jobs out there, some of which are barely technical at all. You can browse some of them here, on the financial aid website. EDIT: Timur informs me that these pages are not accessible to non-students. Oops. Sorry! I took some screenshots for your benefit, just so you can get an idea: 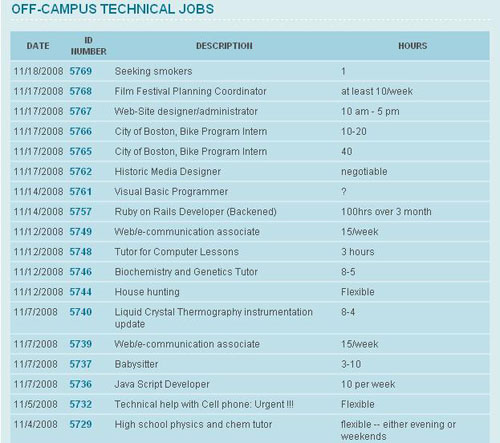 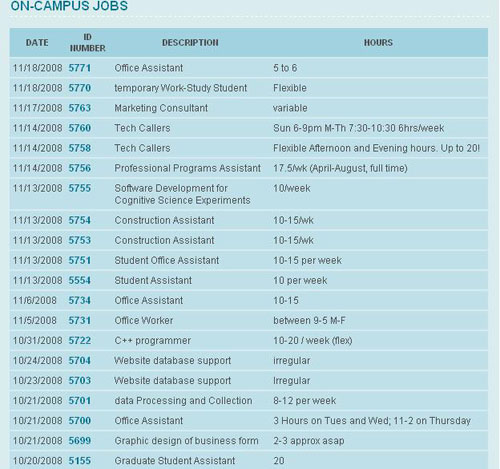 In fact, that’s the source I used to find my job 3 years ago- but the website has thankfully undergone a dramatic improvement in style since then. In any case, you can see that there is a huge list of interesting things you can work on. I have a pretty generous financial aid package, but I pay for all of my own personal expenses myself, with pretty limited support from my parents. Tuition, housing fees, and a few other things are charged directly to my student account, but everything else- food, textbooks, travel, clothes- I pay for myself, so having a campus job definitely helps take money issues off my personal list of “things to stress about.” (Especially because I like my job, and that list is long enough already.)

Ever since my freshman year (sort of), I’ve worked at the Computing Help Desk, which is part of Information Services and Technology. (Yeah, IS&T’s website is sort of an embarrassment, isn’t it? Apparently they were planning to replace it with a new, fancy, way better version since forever ago but it’s still stuck in bureaucracy.) So what does all that mean? Well, IS&T runs all of the computer related stuff at MIT…which, as you can imagine, makes it a huge department. Within IS&T there are people in charge of running Athena (the computing environment on the campus computers), the email servers, all of the web space (anything with mit.edu in it), plus tons more stuff. Within IS&T there is a division called Client Support Services (CSS), and within CSS is there is a group called the Help Desk.

If you’ve ever wondered what it’s like to be the person on the other end of the line when you place a call to tech support, I’m about to tell you.

When I show up at IS&T’s office on Massachusetts Ave, the first thing I pass is the reception desk and the walk-ins area. 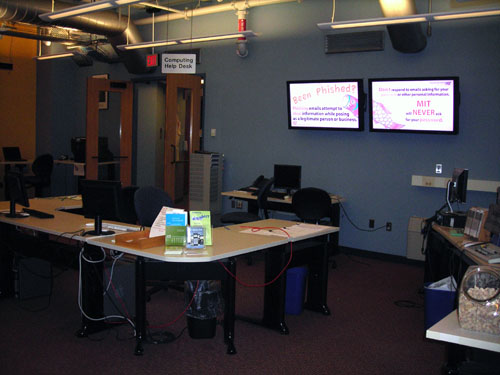 (Normally there are people around, but I took these pictures after hours.) At walk-ins we deal with clients whose problems are too complicated or hardware-related to solve over the phone. I head around the corner to the call center itself. 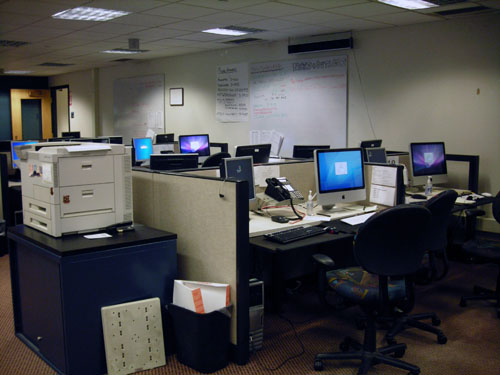 The whiteboard keeps all the useful information in one place- things like useful phone numbers that we often transfer clients to, updates about network outages, and common problems that we’ve been seeing lately. I grab my notebook out of the filing cabinet, which also serves as a table for the free food that is occasionally set out for computing consultants. Right now it’s a little bare, but pizza, Bertucci’s rolls (a favorite of any MIT student), and bagels have known to appear on occasion- sometimes just as an incentive to get us through the day (like during the memorable week when an entire mail server was down for several days) or because there were leftovers from some event, meeting or conference that was held in the building. 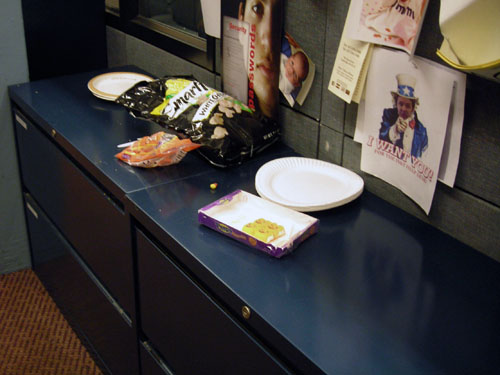 (Yes, after I snapped this photo I did grab a few pieces of candy corn. Yum, candy corn. I miss Halloween.)

Then I take a seat at one of the stations, which comes complete with a Mac, PC, telephone, and snazzy headset so I can talk and type at the same time and feel super cool. 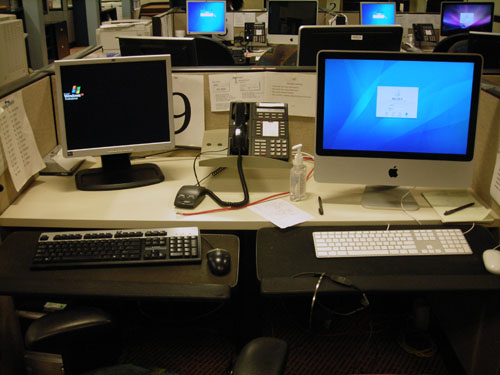 I log into the computers and follow an absurdly complicated set of instructions to log into the phone system, and wait for calls to come in. While I’m waiting, I check out the “queue,” which is a list of all of the unresolved cases that we’re still working on. If there’s an incoming call, my headset beeps a couple of times to let me know someone’s on the line. I open up a blank case file and take the call. I talk the client through some troubleshooting steps, and if I’m lucky (and they have an easy question), I can solve it easily. If I’m totally stumped, unable to deal with directly (sometimes the solution requires superpowers within IS&T that are not normally rewarded to students), or don’t get anywhere after a certain length of time, I write down everything that happened in the case file and add it to the queue, so that other consultants can take a look at it and try their luck.

What sort of stuff do we deal with? Lots of stuff -there’s a whole list of software which we recommend and support. IS&T provides MIT users with all of the stuff they’ll need to get through their virtual lives at MIT- generic stuff like email clients, calendar applications, file transfer applications, file backup systems, and more specific stuff useful to MIT’s system (complete with their own set of MIT-specific configuration settings): Fetch, SecureFX, Kerberos, web certificates. We troubleshoot connectivity problems, email problems, software problems, hardware problems, printer installation, VPN, VNC, Office, and VirusScan. We get frantic calls from people who saved the only copy of their thesis in their email account and somehow deleted their entire inbox (seriously guys, BACK UP YOUR DATA), people who forgot their passwords, and people who want to make their computers do crazy (impossible?) things. Sometimes the person on the other end of the line says, “Hi, I’m the IT person at my lab but I can’t figure out this problem,” which always sucks, because you know right from the start that the person asking you for help probably knows way more about computers than you do, but you’ve got to pretend otherwise anyway. It might seem like we know a whole lot about a whole lot, but that’s not necessarily true. And it might seem like we support a whole lot of stuff, but that doesn’t mean we like it. I obviously can’t hear what’s happening at the other end of the line when my coworkers answer the phone, but one look at their facial expression can be a dead give away that the client just said, “So I’m using Oracle Connector for Outlook, and…” 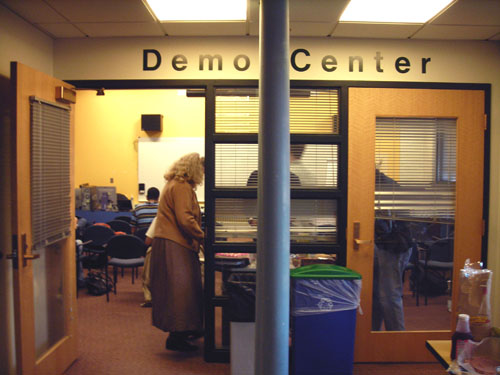 Every Tuesday we have a training meeting in the Demo Center, which is basically a room set up for computer-related presentations, with a projector and a fancy interface that can easily switch the projector feed between many different monitors.

During training meetings, all of the student consultants get together to eat free food. 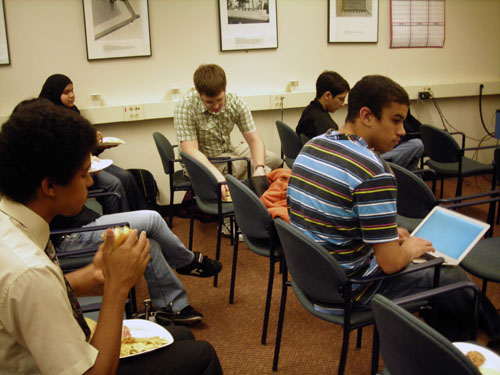 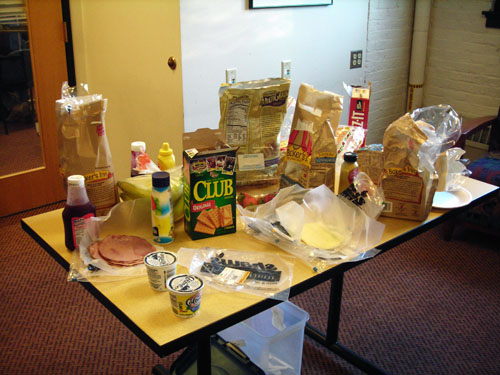 Well, then we also have to undergo some training in exchange for the free food, but it’s not so bad. Usually there’s a guest speaker from some other department within IS&T who has come to explain to us the project that they’re working on. So for example, a few weeks ago we heard from the person who is overseeing the upgrade of the campus wireless network, who explained how the new routers work and what sort of questions we could expect to have people call us with based on the bugs that they’re still working out of the system. 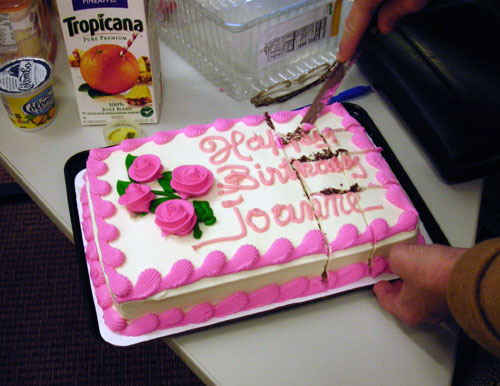 Last week we had delicious cake, because it wasn’t Joanne’s birthday. Andrew (the student consultant responsible for stocking the food supply) wanted to buy a cake and couldn’t resist the urge to have the bakery attendant write something on it. This week we learned lots of useful stuff about Athena, which made me happy, so it’s a good deal all around.

So, how does this fit into my life at MIT? Well, I work anywhere from 6-10 hours per week, depending on the semester and my work load. And honestly, it’s a nice break from everything- to spend a few hours a week working on something not related to mechanical engineering, outside of the labs and classrooms of the academic buildings.

You’ve probably heard that working in tech support is an awful job, but I love it. Sure, sometimes you get phone calls from people who should never be allowed to touch anything with more processing power than a four function calculator, but I usually find those experiences entertaining. (Then again, I’m the person who absolutely loved being a lifeguard mostly because of all of the nutty people I had to deal with on a daily basis- they gave me such good stories to tell at the end of my work day.) Also, the people I work with are great, both the students and staff. We are a really close knit group, and training meetings (when we’re all together at the same time) are always an entertaining affair. We always have a good time together, relating Help Desk war stories and cracking all kinds of jokes…and only some of them are computer related. Okay, maybe half. =)