For once, the title is relevant.

Movies Watched in the Past Year Through Which I Have Remained 100% Awake, and Why:

1.Sin City: Honestly, this film’s cinematography and editing was far more polished than any of my dreams could ever dream of being. I can dream in black-and-white or in color, but not in black-and-white-and-symbolically-important-colors-only. The sad truth is that my periods of REM sleep, no matter how R my EM may be, will never win me an Oscar even if I’m partially Al Gore.

2.Helvetica: It’s an esoteric documentary about how the earthshaking invention of Helvetica not only gave aesthetic purity to subway signs but also brainwashed you into buying Coca-Cola. Need I say more?

3.Slumdog Millionaire: I blinked about 3 times per second while eyeballing this raw masterpiece of breathlessly-paced storytelling, trying to scan in every color-saturated detail before I had to face the grey ugliness of December in the Midwest.

4.Shawshank Redemption: Napping had second priority behind bets with myself about which person in my row of the theatre would start weeping first during the rain scene. I won, by the way.

5.Pulp Fiction: Like any normal person seeing this movie for the second time, I obsessively combed through every grain of Tarantino’s visual/audio landscape for clues about What Was in the Briefcase. No luck. My best guess is still that it had something to do with magnetic monopoles and/or the Freemasons.

(As a point of reference, movies that I’ve slept through this year include but are not limited to: Watchmen, Dr. Strangelove, Life Aquatic, Harry Potter and the Half-Blood Snape-I-Mean-Prince, Love Actually, and Thank You For Smoking. If you ever want a brilliant critical review of the first 10 minutes and the closing credits of any of these movies*, shoot me an email.)

((*With the exception of Thank You For Smoking, a film which lulled me into a slumber so profound that I did not wake until 5 AM the next morning. Granted, I’d just stepped off the bus from New York earlier that night and was so drop-dead exhausted that I could have slept through the brilliant climactic scene of Helvetica, in which some typographer guy opens a 1950s magazine and starts ranting and bashing on all the non-Helvetica typefaces with violent gesticulations of his index finger. Really, I have no idea why Helvetica wasn’t a summer blockbuster.))

Not that I’ve kept track, but I’m willing to bet that most of the movies I’ve slept through were viewed on Thursday or Friday nights. A typically-MIT* trajectory of exhaustion goes something like:

*By the way, using MIT as an adjective is pretty much canonical when talking about tiredness/hosedness/motorized shopping carts. Just in case you’re interested in those unspoken rules of English usage.

Minor exaggerations aside, my second thought after signing up for a 10 pm trip last Thursday to Wallace Observatory with MIT’s Society of Physics Students was, “Should I bring a regular or extra-firm pillow?” My first thought was, “Mmm, meteors.”

The Perseids meteor shower, like a celestial garbage truck stopping by Earth on a yearly basis, dumps a spectacular load of debris into the night sky every August. Apparently, some people like to drive to scantily-populated areas to watch pieces of stellar trash streak across the sunless skies. By “some people,” I mean me and probably most of MIT’s Society of Physics Students. Thanks to Sara ’10’s vice presidencing skillz, MIT SPS borrowed a van and shipped three vehicle-loads of meteor semi-enthusiasts to Wallace Observatory on the first night last week when the sky was visibly raining meteors instead of, well, rain.

So I grabbed an extra-heavy blanket, an extra-bright flashlight, an extra-warm sweatshirt, and an extra-small Jess Lin and headed over to the Green Building to await Sara’s glorious borrowed van. Jess Lin was the ideal last-minute person to bring along because (1) Jess Lin and I could probably share a car seat if x > y, where x is the number of people signed up for the trip and y is the legal passenger capacity of the van, and (2) Jess Lin’s family lives about 10 minutes away from Wallace Observatory, so if we got stranded in the middle of the woods, Jess Lin’s mom could hypothetically drive to Wallace and bring us take-out Thai food . 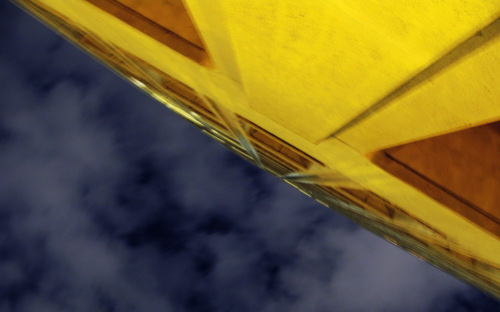 (Low-angle shot of the Green Building.)

After a while, it was clear that Sara was going to be non-relativistically late, so I started shooting the breeze with Jess and shooting the cement with my camera. That’s not a figure of speech, by the way; I ended up with some excellent macros of the cement outside the Green Building. Seriously. 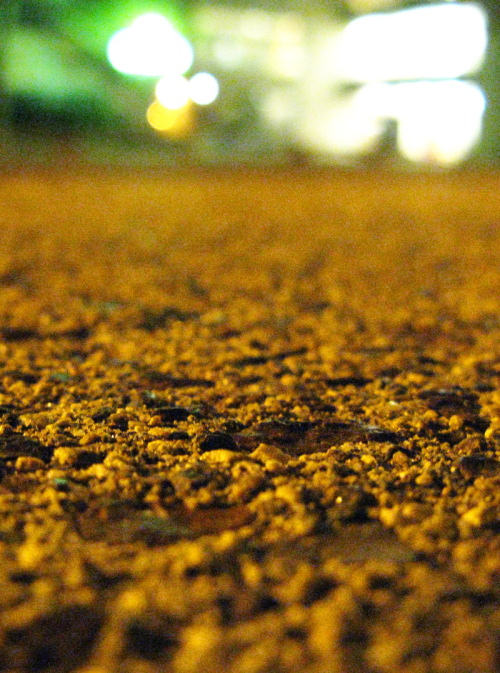 At last, the prophesized van showed up. Inward we piled. Wallace-ward we drove. 40 minutes it took. 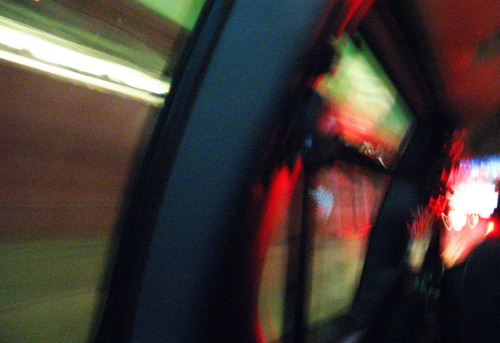 Wallace was cold and dark and starry. After a short tour of the telescopes, we spread our blankets on the driveway and sprawled on our backs, eyes hungering for light. Residual splatterings of starlight slowly intensified from pinpricks into lush necklaces of hot glowing jewels on black velvet. I switched on my camera, upped the exposure to 15 seconds, and set the focus to infinity. 15 seconds later, I had a fantastic, high-quality picture of an empty black rectangle on my storage card.

This was the best photo of the night. 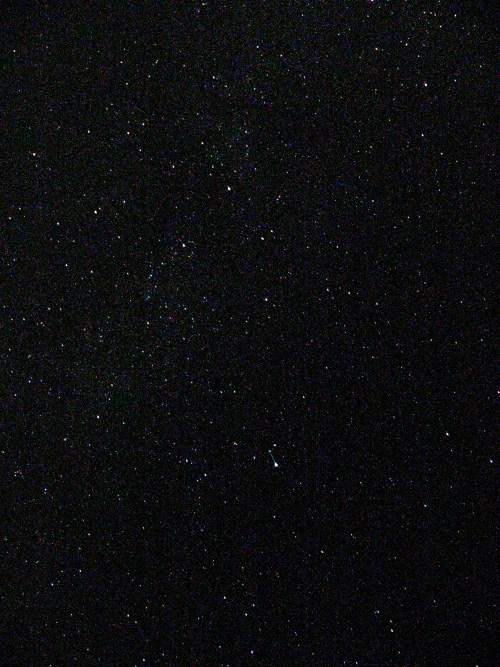 This was the second-best photo of the night. 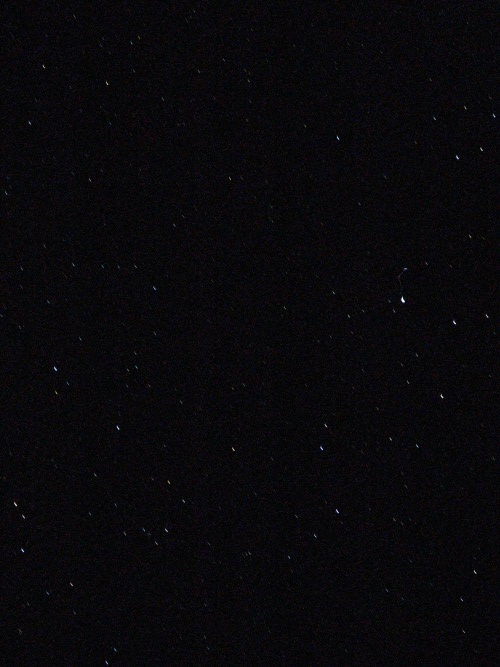 In two hours, I saw three meteors. That’s infinitely more meteors per hour than the average over my life prior to August 13, 2009! (The secret to avoiding disappointment is to recalibrate your perspective using irrelevant statistics. Another example: I broke my right arm. That’s infinitely better than being one of the 0.0003% of people in the world who go to Harvard!*)

*Actually, I’m pretty sure this statement is comforting not because of the statistic but because it makes fun of people at Harvard.

If you’re still disappointed, never fear: the moral of this story is that hope and determination always prevail in the end. After a night of abortive attempts, I was rewarded with: 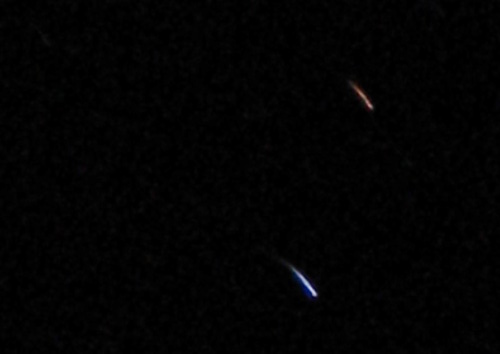 Just kidding. The moral of the story is that if celestial bodies won’t move for you, you can at least move your camera to create cheap blur effects that look like meteor tails, because nobody reading your blog can tell the difference anyway.

At least I didn’t fall asleep.