For those of you who missed the blog post subtitle:

you love being miserable!

Now wait just a second while I clean up this potential PR disaster; if I don’t, Chris and Dave will probably turn me into bacon. (Speaking of which, do you know what form of pork I find to be often more delicious than bacon? Chinese barbeque pork (or at least, that’s what I think it is — browsing google images seemed to suggest that’s what it’s called. You know, the delicious pork dish that’s so red it seems candied? Anywho) 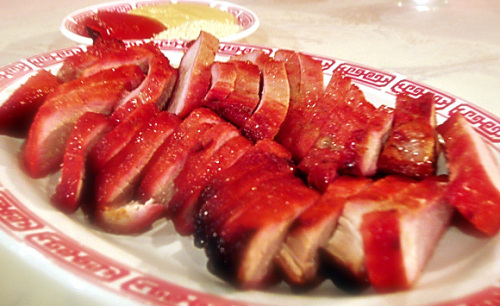 More delicious than bacon? Perhaps.
Image taken from royalbaconsociety.com. Wait, what? Royal Bacon Society? Dare I even ask?
Speaking of bacon, I don’t see what the big deal is, anyway. Bacon’s just one of those foods that you’re not allowed to dislike. You tell people you don’t really like bacon and they tell you they’re going to steal your firstborn and hold him hostage until you try bacon, because apparently if you don’t like bacon you must have never tried it before. Alternatively, you tell people you don’t like bacon and wake up in a bath tub full of ice, your kidneys removed, and a pile of bacon of comparable value to your kidneys in the living room with a note “it’s for your own good.”

Or maybe not. But people get too worked up over bacon; when I tell people that I don’t especially care for bacon they sometimes look at me like I just said something nasty about their grandmother. However, it’s time to move on with this blog post, before the bacon police come after me or (as previously warned) Chris and Dave turn me into tofu.

*for the record, I am okay with bacon. I’m just not a huge fan. 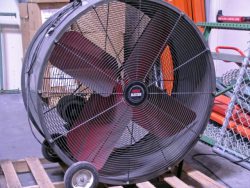 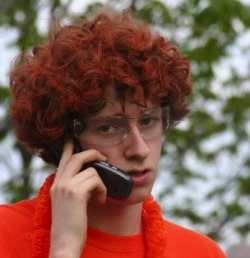 By now, you’ve probably forgotten what I began this post with; I certainly have. However, I’m going to write about being miserable.

I think people at MIT like to be miserable. I think, however, that it’s not an oxymoron; keep reading, and maybe you’ll see what I mean.

By “miserable”, I mean absolutely and terribly busy.

I didn’t use to think I was the kind of person who liked being busy; after all, I’m quite lazy, and procrastinate to the point of painfulness. Even when I don’t have much work, I procrastinate; if I have to do one thing in a day, like get groceries, I can almost guarantee that I will take more than one day to do it. However, that’s not to say I don’t get things done.

The way it works for me is that when there are more things I want to and need to get done than one in a day — when there are so many I can’t possibly do them all, in a day or a week or even this year — I begin to buckle down. I get efficient. I get into it.

I still procrastinate, I still take time to relax no matter how much work I’m facing, but when I have a lot of work is also when I most enjoy my relaxation. Sitting around and watching TV (Psych! the only show I pay significant attention to at the moment) is *boring* to me, when there’s nothing else to do. At the end of this summer, I had two weeks with absolutely nothing I had to do, and I started off watching TV and sitting around with my laptop for the first two days. It was after I returned from one of the busiest vacations in my life — if it can be called that — which had immediately (<12hrs) followed the busiest work week of my life. It was a busy summer, and that’s what Part 2 of this post will be: my busy summer. Part 3 is about this semester, and the wonderfully stupid choice I’ve made (that I don’t yet regret at all, and hope to continue not regretting) I’ve made. However, when I returned from my busy summer to spend two weeks in front of the TV, I grew restless after two days. I started driving to MIT at nights to help out with rush and recruiting freshmen for my dormitory. I started working heavily on a project, and treating it like work. I tried to find more and more things that I wanted to do, knowing fully that I would only seriously approach a small number of them. In other words, I got busy.

I sometimes feel a bit miserable when I’m too busy. I think that’s the one problem with this lifestyle: when things overload and there’s too much to do, it stops being fun. When you’ve got regular life to keep up with in addition to all the fun projects and classes you want to pursue and the two sides conflict, it can start to feel like a demolition derby; then you realize you have a test next week and a pset due in four hours that you haven’t started and you still haven’t had time to buy groceries so you haven’t had a meal in a week and you’ve been living off of yogurt and granola bars but you still can’t keep up — when it starts to feel more overwhelming than this run-on sentence — that’s when things get tricky.

However, those moments do not make up my life. I think one of the most important things at MIT is not learning to be efficient with your time — time-management doesn’t work for everybody, and it doesn’t seem to work for me — but rather learning how to deal with your time. How to handle those moments of tension and overload and take on just enough so that those moments are few and far between. I think furthermore that MIT is full of people like this, like me in this regard; I think we’re a bunch of busybodies, too eager to pursue things to the point where our schedules become longer than our textbooks. I think that’s a great thing; it certainly has potential to be a bad thing, but everybody I meet seems to have figured out how to keep it under control, and harnesses it to do amazing things.

What brought this to mind last week was a post-blogger-meeting trip to IKEA for my new standing desk — expect an eventual (pre-2013 ;) ) blogpost about my attempts at using a standing desk, perhaps once I’ve had more time with it — with Anna, whom you may have read about. Anna tried to enumerate to me the clubs she had joined and the activities she was pursuing — the day before classes started, before any of the really heavy work had even begun — and I malloc’ed to null, because it was an absolutely humongous list. I think it’s what a lot of freshmen do, though — you sign up for a million clubs, and in the end you only actually spend time at 15-20 of them (I kid — it’s definitely a single digit number). But anyway — Anna, good luck with all that. I’ll leave discussion about that list, though, and about narrowing down choices of activities, to you (if you want), since I have enough blog fodder lying around here somewhere. And I’m busy enough that I don’t feel the need to add any more to the list, right now. (But thank you for inspiring these thoughts!)

I guess that’s how it is here — most people at MIT seem to love being busy, even if they (like me) don’t realize it. However, you know what they say; misery loves company, and I think that the company here is some of the best. I don’t think the busy leads to miserable, though; I think we keep it under control, and it feels awesome.

Just don’t get so busy that you start having your cat do your homework for you. 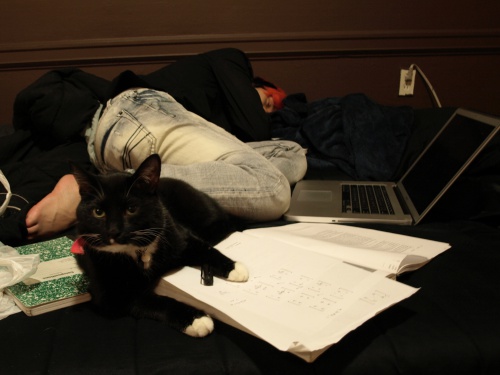 From top to bottom: Vincent, cat.-Cam