Why is BC awesome? Because three bloggers live there. Plus, lots of other stuff too. Read on.

So I suck at life and haven’t blogged in FOREVER. =(

But! I’m making up for it by putting tons of effort into this much-anticipated virtual tour of Burton-Conner. Seriously. I took literally about 70 pictures of the dorm before sorting, editing, and writing captions for them. So if you think the entry sucks, keep your mouth shut. =P 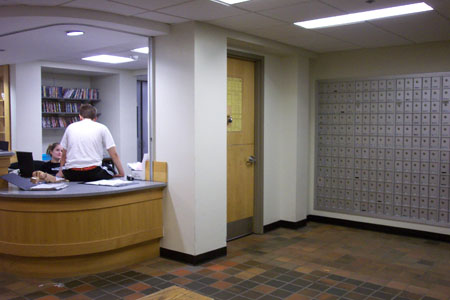 The first thing you’ll see when you walk into Burton-Conner is the front desk. The desk is staffed by BC residents who make sure anyone who doesn’t actually live here checks in and out. The front desk is also where you can get your mail, find out if Mom sent you any care packages lately, check out a movie from the dorm collection, or borrow the pool cues/ping pong paddles/etc to use in the game and TV rooms. (More on those later.) 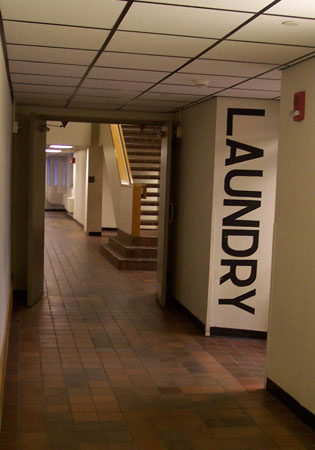 The laundry room is conveniently labeled. 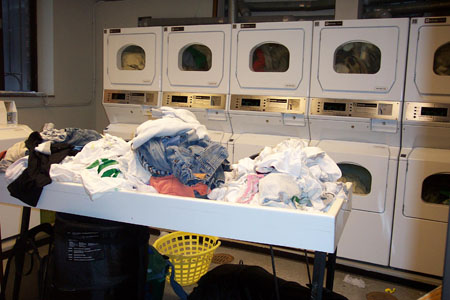 Ta-da! The laundry room. Not much to say here, really, except that one use of a washer or dryer costs $0.75. And someone has an awful lot of clean socks they forgot to pick up. 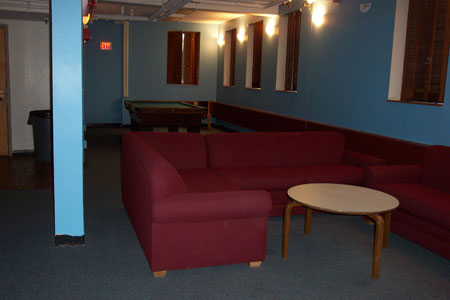 This is Burton-Conner’s newly painted spacious TV room…there’s a TV in there, I swear. On the other side of the room. Anyway, the TV room is a cool place to hang out with friends, watch TV or movies, or play on any of the game consoles the dorm has. I have no idea which ones they are, sorry. 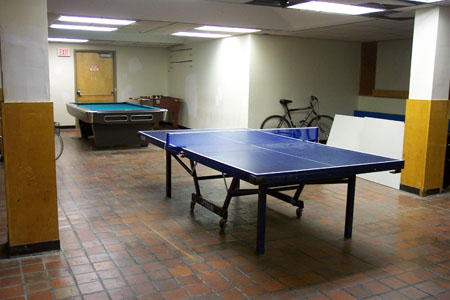 Seriously, the game room is a little sad and lonely looking these days. Not many people use it, but I’ve definitely not studied for finals by playing game after game of pool down here. 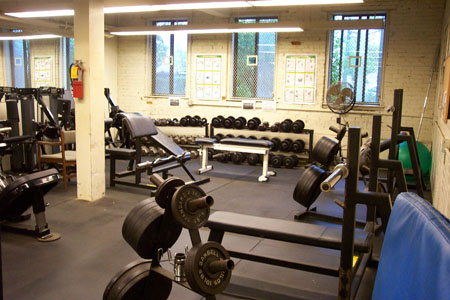 Any BC resident is free to use the weight room. Yay exercise! (There’s also a cardio room with a treadmill, exercise bike, and elliptical machine. But I couldn’t remember the combo to unlock the door, so no pictures. But whatever, you probably already know what a treadmill looks like.) 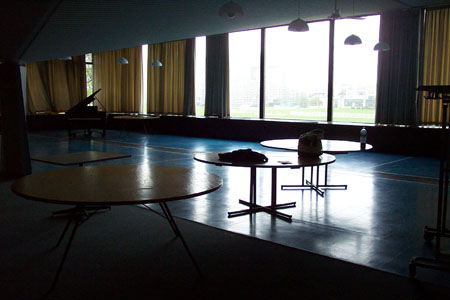 This is the Porter Room. Back in the day it used to be a dining hall, until the dorm got rid of it. Now we’re left with this big open, underused space. Dorm-wide meetings/social events/CPW stuff/Orientation parties are held here, and sometimes different groups and clubs (like small dance and theater groups) will request to use the space for practices or performances. My friend Becky ’09 practices belly-dancing in there all the time. I know because she always has to borrow my CD player. 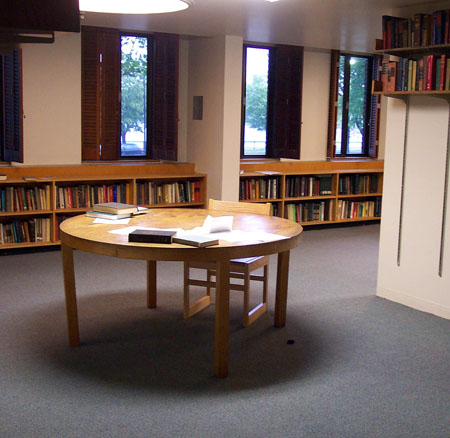 This is the Burton-Conner library. I’m not gonna lie, I don’t think there’s a single book in there that was published after 1962 or something. But there’s a small Athena cluster and a study space with desks with those big anti-distraction walls. It’s a good place to study without being tempted by your computer or TV or friends. It’s also a good place to look for course bibles- collections of all the notes/psets/exams in a particular course from previous years. Plus, we recently elected two new library chairs who are going to try to breathe some life into that place. =)

Not pictured: several music rooms for resident use. I’m not remotely musical, so I’ve never been in them. But I assure you they exist.

Now, a little geography. All of these dorm-wide spaces I just showed you (except for the library) are on the ground floor. Above the ground floor is the first floor. Yeah, I know. This confuses a lot of people. There are no rooms on the ground floor of BC. So when someone says they live on Burton 1, they actually live on the second floor. Also, the dorm is split into two sides- Conner and Burton (big surprise). They’re both in the same building, but aren’t directly connected- so Burton 2 and Conner 2 are technically on the same floor, but there’s no way to get from one to the other without going down to the ground floor, over, and back up again. Also, there is no Conner 1. Conner 1 is taken up by the housemaster’s suite (a faculty member who lives in the dorm), a conference room, and the library- so no one actually lives there. And that’s how Burton Conner has 6 floors and 9 living groups. =) 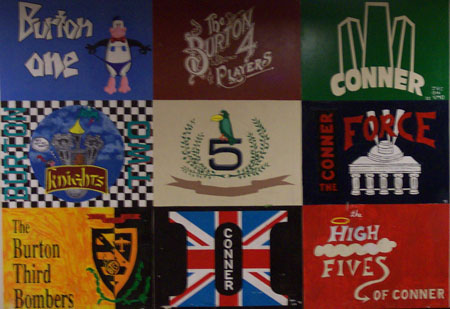 If you end up living at BC next year (for real, after freshmen musical dorms), you’ll go through floor rush- each of the 9 floors will have free food and fun for you to enjoy. It’s a chance to meet the upperclassmen and get to know each of the very different living groups before having to rank your preferences. Each floor has its own lounge and its own sense of style. I’ve chosen some pictures to show off some of my favorite floor lounges and hallway decorations. The first picture in each set is the floor’s mural (each floor has one on its stairwell landing). 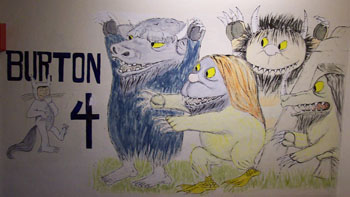 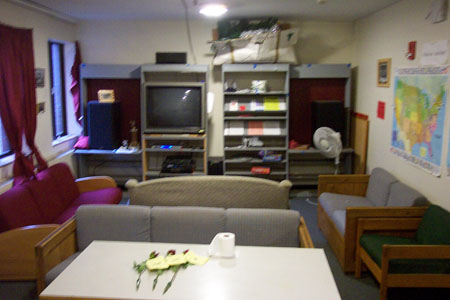 Burton 4 has a pretty sweet entertainment system in their lounge, if you ask me. 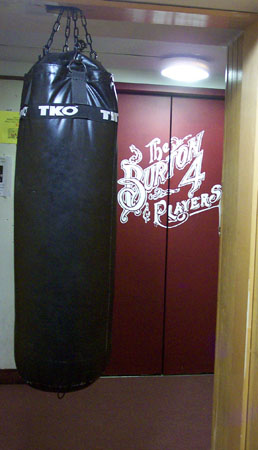 They also not only have a mural on their elevator doors, they have a punching bag in the main hallway so you can take out your pset frustrations in a…non-violent way… 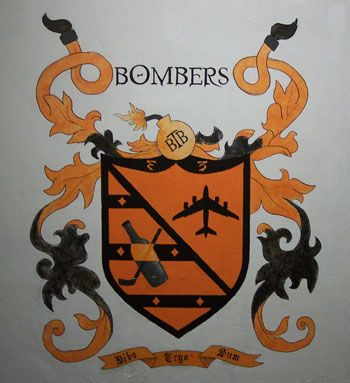 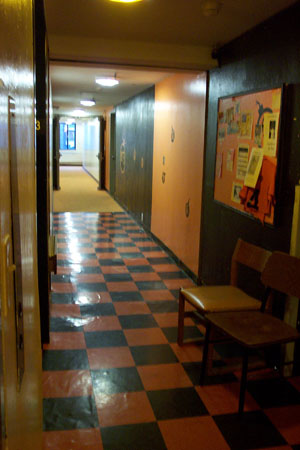 The “Burton Third Bombers,” as they call themselves, really like orange and black. 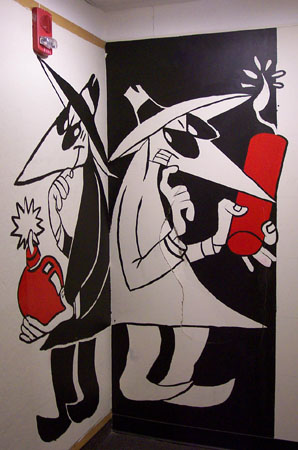 Burton 1 has some pretty awesome murals in its hallways… 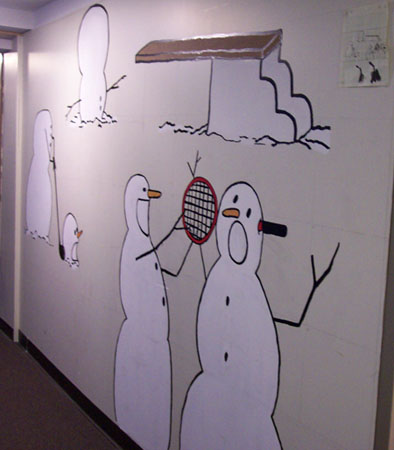 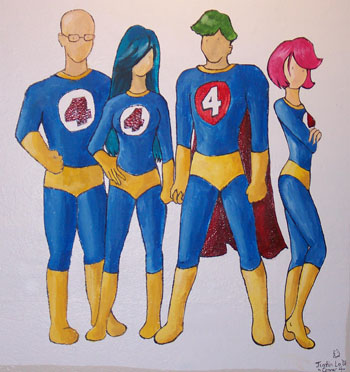 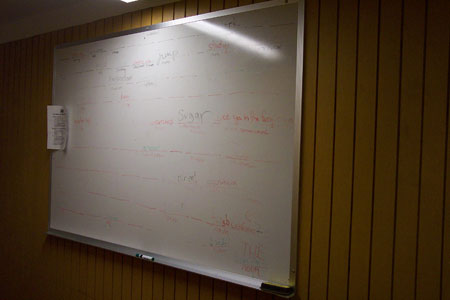 From the people who brought you toy gun fights and bicycle skiing– the Conner 4 whiteboard always has a new, hilarious mad lib about C4 residents. It’s probably good that you can’t really read it. I’m sure it’s not all entirely appropriate…. 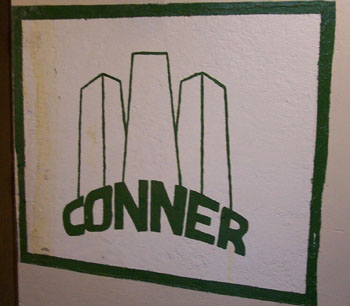 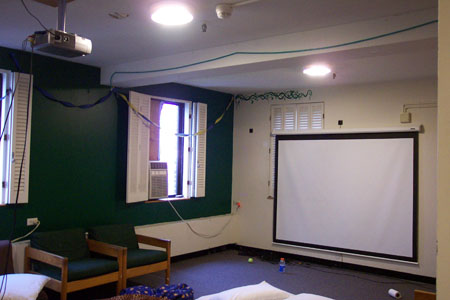 Conner 3 has a huge projection screen instead of a TV in their lounge. 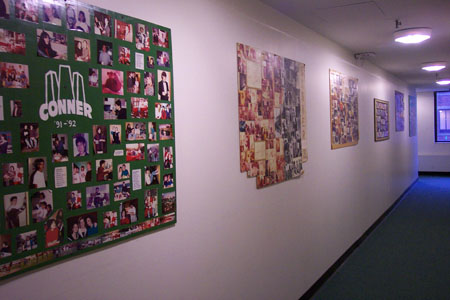 They also decorate their hallways with collages of pictures from past years. It’s a pretty neat look into the past.

As for the actual living spaces themselves, the dorm is arranged in suites. Each suite consists of between 4 and 12 people (ish) who all share a suite lounge (separate from the floor lounge), a kitchen, and a bathroom. 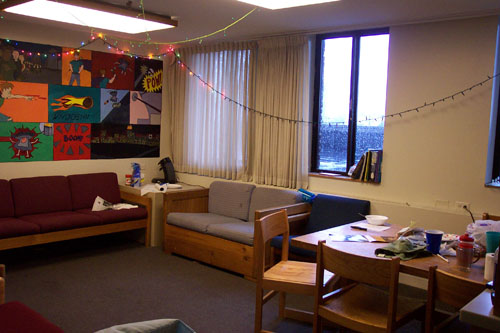 The 23 suite is the largest Conner-side suite. The 223 suite residents spruced up their lounge with some Christmas lights and a comic strip mural. The 224 suite has a huge dragon painted on their wall, and the 413 suite has decorated their walls with chalkboards they use to keep track of embarassing out-of-context quotes their friends make. In short, there are lots of ways to decorate your suite lounge. =) 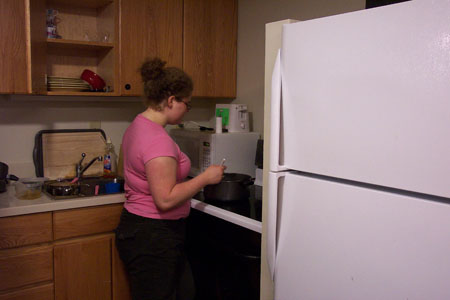 Meara ’09 kindly poses for a photograph as she cooks dinner in her kitchen. Meara lives in the 12 suite, which is one of the smallest suites in the entire dorm. This kitchen is only shared by 4 people; all the other kitchens are larger than this. I’d show you a picture of my kitchen but…well it needs to be cleaned. Plus, you’ve already seen them when I blogged about the freshman dinner. 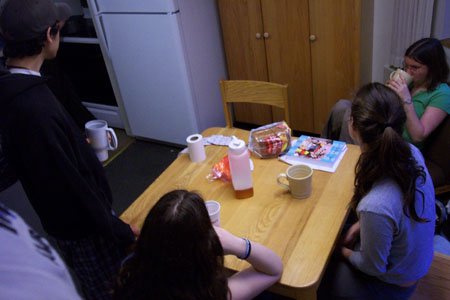 A bunch of ’09s socialize in the 212 lounge while Meara cooks. 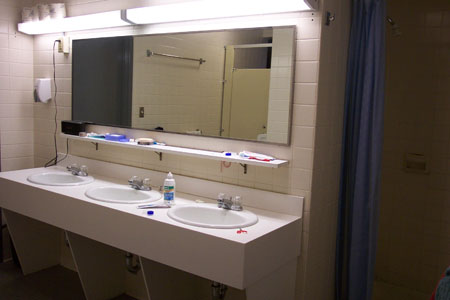 This is my bathroom- which is shared by six people. On the opposite wall is a shelving unit for keeping all of our soaps/shampoos/miscellaneous hygeine products.

Becky and Sam (both ’09) have decorated their door with a pirate flag, which I think is cool enough to warrant a mention here.

As for the rooms themselves- as a general rule, freshmen live in doubles and move into singles as sophomores. Of course, the number of rooms is set, but the number of people in the dorm changes, so sometimes it doesn’t work out quite that nicely, but it’s a nice general rule.

I wish I could show you more rooms, but there was barely anyone around when I was taking pictures. So you’re stuck with all the old picures of my room- before and afer we painted it and before and after we got our futon. It looks pretty much the same as it did then, only messier. Hopefully I’ll get some pictures of typical singles and post them. But mostly they’re just the like doubles…only smaller.

So now that you know all about BC, go ahead and flood me with questions. I’ll answer them all in my next entry (along with the old ones I haven’t answerd yet- I haven’t forgotten!)

Edit: OK I lied. I’m going to answer your questions in this entry as I get them. Here we go.

Dima said:
A few questions, because I’m thinking this is where I want to live. Are there music practice rooms?
Yup! I edited the entry just now to mention them.
Also, do most entries have pool tables? And also, do the people in most entries cook dinner together?
You’re confusing BC and MacGregor- we’re organized by floor, not entry. Also, all of the stuff I showed you on the ground floor- the TV room, the game room, etc- is shared by the entire dorm. None of the floors have their own pool tables, although I believe Burton 1 has their own air hockey table. Sometimes people will cook a big meal and share with the floor, and sometimes roommates shop/cook together, but in my experience most people don’t cook in groups.
And I know BC is probably really diverse as a whole, but what are some characterstics that the residents share, in general?
I don’t think there’s an answer to that. Some other dorms have stereotypes attached to them- like “that’s where all the math majors/business majors/comp sci nerds/frat guys live,” but BC is one big mix of everyone, which is why I like it so much. I don’t think BC has much of a stereotype attached to it like other dorms, but maybe it’s just hard for me to notice because I live there. I’d be interested to know what perceptions other MIT students have of the dorm- they’d probably be able to answer better than I can.
And also, what don’t you like about BC?
I’ll throw in a response to a question I got via email here- yes BC has mice, but they’re not any bigger or scarier than the mice in all the rest of the dorms. I think I’ve seen one all year. They don’t bother me so much. That said, we had tons of ants in the beginning of the year. Talk about gross. They went away for the winter and haven’t come back yet, so I’m hopeful that the treatment they did over winter break is working.